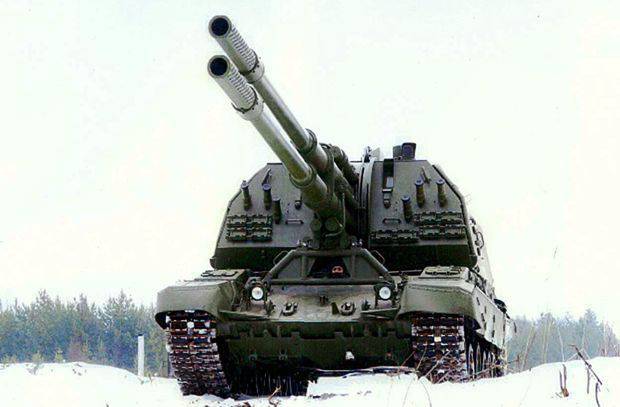 Participants in the Victory Parade in Moscow 9 May 2015 were self-propelled howitzers “Coalition-SV” - worthy successors of the ACS “Acacia” and “Msta”. Heavy-duty, powerful-looking 152-millimeter self-propelled guns impressed everyone who watched the passage of a column of new Russian armored vehicles. But this impression would be much stronger, appear on the Moscow parade, these cars in their original form - with high towers, from the frontal armor of which two massive trunks looked into the sky. The 152-millimeter self-propelled howitzer “Coalition-SV” should have become such. And it is possible that in the end, in this form, it will also be put into service. After all, this unusual arrangement is not determined by the whims of the designers, but by the urgent need - and the fact that the novelty has outstripped its time. 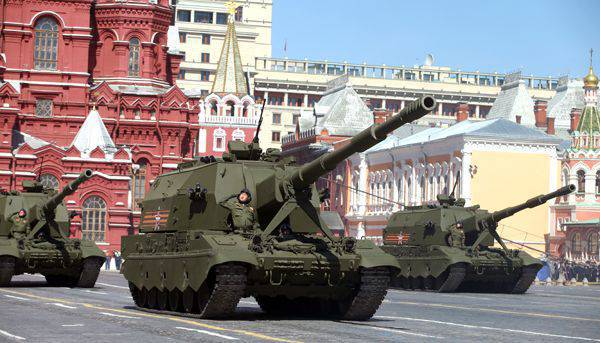 Multiple artillery systems appeared in the armies of the world not by chance. Always the main - and often the only - reason was the need to provide much more than other samples, power and rate of fire.

Before the advent of automatic firing systems, thanks to which automatic weapons, machine guns and submachine guns appeared in the arsenals of armies all over the world, it was precisely due to the multiplicity of barrels that a high rate of fire and the density of fire were achieved. It was this principle that was used as the basis for the mitraleza, known in Russia as a "canister" (although these guns were fired not with a canister, but with rifle cartridges), capable of firing a salvo from several or even several dozen barrels.

The further development of mitraleza (by the way, this word in French today is called the system, in Russia bearing the name “machine gun”) was the Gatling gun, which for the first time loudly declared itself on the battlefields of the American Civil War. Charged with the breech block of several barrels mounted on a single rotating bed, allowed to fire with tremendous speed, which, in turn, ensured the highest density of destruction. While the drive of the Gatling gun was manual, she shot at speeds from 200 to 1000 shots per minute, and after the drive shaft was able to adapt the drive to the 3000!

However, by the beginning of the First World War, single-barrel machine guns began to arrive in the troops, providing though not such a high rate of fire, but differing in a much simpler and easier construction. But Gatling’s guns moved to planes and ships - to where no one had to carry them in their hands, and in place for the construction it was possible not to save. It is the continuation of the Gatling gun that are such famous multi-barrel automatic fire systems, as the Russian shipborne installation "Dagger", which includes the six-barrel 30-mm gun GSH-6-30K, or the American six-barrel aviation 20 mm gun M61 "Volcano".

A similar approach prevailed in the field of large-caliber artillery. Only guns remained, which did not need to be carried anywhere and which could be placed in several tiers vertically. Thus arose and developed shipboard multi-barreled turrets - and similar coastal artillery installations.

Attempts to attach a multi-barrel large-caliber system to tank the chassis failed for a long time. They simply explained: in order to make a structure with more than one large-caliber barrel move, an extremely high power engine was required, which inevitably entailed an increase in the total mass of the structure and a decrease in the ammunition load - and so on. Only small-caliber multi-barrel self-propelled guns took root - such as the Shilka self-propelled anti-aircraft gun, armed with a quad automatic 23 mm gun, and its heirs Tunguska and Pantsir-S, which have two and four 30 mm automatic anti-aircraft guns, respectively.

The great surprise was the military experts, when at the very beginning of January 2006, for the first time, the unique Russian development was presented to the general public - a promising twin-barreled self-propelled howitzer “Coalition-SV”. The designers from Nizhny Novgorod, Perm, Yekaterinburg and St. Petersburg managed to do the impossible: to create a mobile rapid-fire two-gun self-propelled unit, and capable of firing at a record distance - up to 70 km!

Skeptical readers will certainly notice: “Well, again, we are developing and trying to smelt our already not very well-equipped army of kunshtuki, which, because of their futility, have long been abandoned abroad, and we are presented with the last word of technology!”. They will notice - and they will be fundamentally wrong, because such an artillery system, like no other, meets the requirements of modern self-propelled artillery installations.

According to the concept of modern ACS, its main characteristics are the rate of fire, mobility and firing range. All three basic requirements are associated with a simple condition. Modern self-propelled guns in the current development of systems for detecting and destroying armored vehicles should change position after almost every shot. On average, the self-propelled gun can stay in place for no more than a minute, after which it will have to leave the position so that it will not be destroyed.

The rate of fire in modern ACSs of the traditional single-gun scheme is ensured by the use of increasingly faster automatic loading machines and guidance systems. But both of them have purely physical limitations: there is a speed threshold, which is simply impossible to overcome while classic powder shots are used - whether it is separate or unitary. Mobility is also limited to purely physical: the ratio of the weight of the self-propelled (which is determined by its design, caliber of the gun and the mass of ammunition) and the weight and engine power. As for the firing range, it is achieved mainly due to two indicators: the power of the charge and the length of the barrel. And here again the very compromise that determines mobility also comes into play: it is difficult to install a long-barreled weapon with a powerful charge on a tracked chassis so that the final design moves quickly enough and at the same time has a decent ammunition.

From this point of view, the double-barreled "Coalition-SV" turned out to be a completely unique system, which nobody has yet been able to create analogs of. It was not possible, although attempts to do something similar are known. Russian gunsmiths managed to make it so that with dimensions and mass comparable to the characteristics of most modern self-propelled guns of the same caliber, this installation has twice the barrels - and therefore is capable of firing twice as fast and twice as dense. That is, the actual one “Coalition-SV” replaces two single-barreled installations similar to it, which makes it unprecedentedly effective.

In 2003, as a result of unhurried research work since the late 1980s on the topic "Uninhabitable" and the study of the possibility of interspecific unification of promising large-caliber artillery weapons of the Ground Forces and the Naval fleet the idea of ​​self-propelled guns "Coalition-SV" was born. By this time, weapons designers managed to create a 2A86 double-barreled gun, which, with two barrels, had a weight comparable to the weight of a traditional single-barrel gun system of the same caliber. This was achieved through the use of completely new materials for the trunks and breech, which provided the required strength characteristics with much less weight.

The second finding, which allowed the Coalition-SV to be born, was the new pneumatic automatic loader. He not only ensured a high rate of loading and, accordingly, shooting, but also allowed him to make the conning tower uninhabitable. Due to this, it became possible to make it more compact and, accordingly, easy - which means that there was a reserve for installing a double-barreled gun.

The same automatic loader allowed to implement the concept of an armor capsule for the crew, which was located in front of the car. A similar layout has the new multifunctional tracked platform “Armata”, on which the T-14 “Armata” is built (it should also in the near future become a platform for the ACS “Coalition-SV”). Accordingly, due to the compact placement of the crew won some more weight, also spent on strengthening the firepower.

"Coalition-SV" in facts and figures

The resulting design was first presented to the public in January 2006. And she immediately made a real sensation: the mobility demonstrated by the novelty, the rate of fire and the firing range could not be compared with other systems currently in service in the world. Coalition-SV demonstrated firepower comparable to the power of multiple rocket launchers, while maintaining the accuracy of hitting traditional for barrel artillery. There is nothing of the kind in any army in the world to this day - and it is not expected.

If we compare the “Coalition-SV” with such the most promising foreign SPGs, like the American M1096 “Paladin” and the German PzH2000, then the Russian system surpasses them in all the main combat indicators: shooting rate (23 shot per minute against 4 and 10, respectively) firing range (40 – 70 km versus 30 and 40, respectively), ammunition (70 projectiles versus 39 and 60, respectively). In addition, the Russian novelty also surpasses them in maximum speed and range on the highway - 80 km / h and 500 km versus 61 km / h and 299 km in American SAU and 60 km / h and 420 km in Germany, respectively. By the way, the crews of the western art installations are also bigger: six people from the “Paladin” and five from the PzH2000. 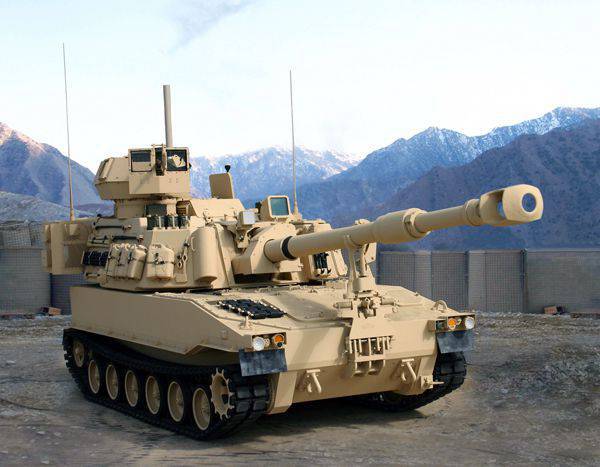 Why, then, the inquisitive reader will ask, if the double-barreled version of the Coalition-SV is so good, at the Victory Parade did they demonstrate the traditional single-barreled one? The answer is quite simple and, alas, predictable: the lack of money in the military budget and the lack of proven technologies to produce a new artillery system quickly, in large quantities and with proper quality are to blame. As for the Russian army, new self-propelled guns were required as soon as possible, and they were fairly inexpensive, as reliable and simple as possible - and that means that they were using already developed elements and technologies.

However, the adoption of the single-barreled version of the “Coalition-SV” does not at all put an end to the double-barreled structure: work on it continues and expands. In particular, a variant of the Coalition-F artillery installation has already appeared (currently available to the public only in the form of 3D models and drawings). The index “F” means “Fleet”, as well as “SV” - ground forces, and denotes the scope of application of a unified installation. The naval version of the Coalition is intended for installation on medium and large warships of new projects, the development of which shipbuilders are now completing.

In contrast to the “SV” variant, the “F” variant will have a system for loading and supplying ammunition through the use of a structure that is layered in height. In other words, if in the land “Coalition” the shells are located slightly behind and to the side of the state-owned parts of the guns, then the naval shells have a traditional ship-to-ship system with a supply of ammunition from below. The same tower installation "Coalition-F" can - and almost certainly will! - used in coastal artillery, traditionally attributed to the competence of the Navy and as unified as possible with ship artillery systems.