October 23 2015
28
The death of Stalin deprived Russia (USSR) of a security guarantee. To preserve the security of the peoples of the country, a leader in the level of intelligence, scale of thinking, knowledge and will was equal to Stalin. 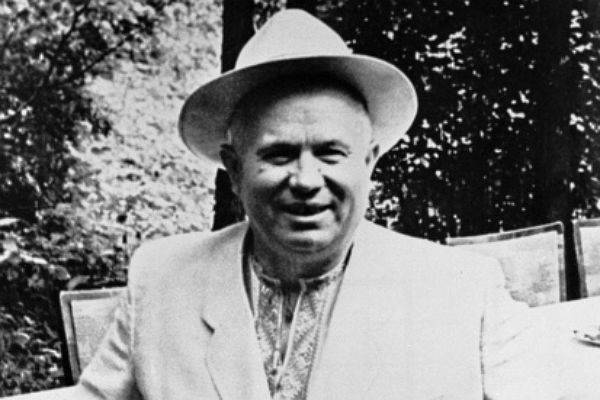 In the period from 1917 to 1953, a country that has become a dynamically developing superpower with such a leader would guarantee all the peoples of the USSR safety, greatness, prosperity and the highest standard of living — higher than any other country in the world.

But a person who didn’t have a state-minded state, who did not understand and did not love Russia, came to power - Nikita Sergeevich Khrushchev. He took control of the blooming country restored after the Great Patriotic War 1941-1945.

Not a single head of the Russian state for all his thousand years history I did not get such a mighty and beautiful country which N. S. Khrushchev inherited.
5 March 1953, on the day of the death of Joseph Stalin, G. M. Malenkov was appointed Chairman of the USSR Council of Ministers. But it was a temporary appointment, as it was necessary to appoint someone instead of the deceased I. V. Stalin, until the winner in the struggle for power is determined. G. M. Malenkov appointed L. P. Beria, V. M. Molotov, N. A. Bulganin and L. M. Kaganovich as his deputies. Nikita Khrushchev headed the secretariat of the Central Committee of the CPSU.

In fact, two candidates fought for power: N. S. Khrushchev and L. P. Beria. In this struggle, N. S. Khrushchev won. Why? After all, L. P. Beria possessed a large-scale state mentality, tremendous organizational skills, and comprehensive knowledge. How could a man of great intelligence and strong will lose to Nikita Khrushchev?

In my opinion, there was a third force that, on the day of the death of J. V. Stalin, emerged from the underground and brought N. S. Khrushchev to power. Contemporaries and earlier was not clear the rapid rise of N. S. Khrushchev in the higher echelons of power, which did not correspond to his personal abilities.
“In January, 1932, Khrushchev was elected second secretary of the CIM of the CPSU (b). Career, frankly, dizzying, as already then many gossiped. Here are the entries from the diary of party functionary A. G. Solovyov from 28 in January 1932: “I and some are surprised by Khrushchev's quick jump. He studied very badly in the Industrial Academy ... Now the second secretary together with Kaganovich. But surprisingly close and great toady. "

In February, 1938 Khrushchev was appointed First Secretary of the Communist Party of Ukraine, and then a member of the Politburo of the Central Committee of the CPSU (b). Some researchers rush through the career ladder to explain his cruelty, as there is evidence that Khrushchev in 1930-ies appealed to the government and asked permission for the death penalty for more criminals than the government allowed.
Incidentally, from this information, both the liberals and many communists came to the conclusion that there were "shooting lists" that supposedly determined the number of people to be shot.

Those who deliberately distribute hasty conclusions can be understood, since they are ill-wishers or haters of Russia, the Russian people, the Soviet government, Stalin. Some of them have no opinion at all, but slander our past, because the West pays them for it.

Surprise our honest citizens. How can they not understand that in the 1930-ies the country was sorely lacking people to work in factories and factories under construction, in agriculture, in scientific and cultural institutions, in the service sector, for service in the police and the army. Each person was "worth its weight in gold" and suddenly the assertions about the presence of "shooting lists". Should doubts fall into our hearts, how can this country, confident that it might be attacked by the enemy in the near future, can launch a plan to shoot people?

In fact, at that time, the USSR was a people's state with a current constitution, a prosecutor's office, exercising control over the implementation of the law in cities and villages of the country, in courts, prisons and other state institutions. We theoretically and now have the opportunity to raise the case for any convicted person in 1930-s precisely because at that time the requirements of the existing laws were respected. And if at present there are many citizens in the country who believe in the existence of the above lists, it means that our society is unhealthy and may die.

The USA allocates money to its agents to distort the essence of the people's socialist state. For decades, anti-Soviet propaganda has been financed, including today, when there is no USSR for more than twenty years. They finance and do not believe that money is spent in vain, because they know that by killing the greatness of our past, they are killing our future.

In the USSR in the 1930-ies the abolition of the death penalty was also impossible, since this would lead to a sharp increase in serious criminal offenses and the revitalization of the fifth column. This is confirmed by today's Russia, in which the death penalty was virtually abolished and have a lot more murders than would have had to execute criminals to prevent such crimes. It turns out that in today's Russia, the state is primarily concerned with the preservation of life for murderers, and not for peaceful law-abiding citizens. Such a decision in a large non-Western European country cannot be called relevant to the interests of its peoples.

And the haters of the Soviet state present this humane action as evil. And it always surprises not that they slander in the end account not only on the Soviet power, but also on the Soviet, Russian people, but it is surprising that they are believed. After all, if a person thinks, loves his Homeland, he cannot believe in such slander. Not only the mind, but also the heart should tell him the truth. Only a morally unhealthy society can reach such a degree of disrespect for the history of their homeland and trust every talking nonentity.

Since its foundation many centuries ago, the Russian state before 1991 was the traditional, most humane state in the world. Even cursed in the West, our Tsar Ivan the Terrible allowed the imposition of everything (together with the perpetrators of criminal offenses) of less than 4's thousands of death sentences for 30 years of government. Kings of Western countries allowed the imposition of such a number of sentences in one year. They hate Ivan the Terrible because Russia attached Siberia to him, because he did not allow the West to interfere in the internal affairs of Russia either militarily or peacefully and raised the country to a level beyond the reach of the Western Empire.

In my opinion, this quality cannot provide significant advantages in the fight against highly intelligent people. I believe that Khrushchev was supported and promoted to the pinnacle of power by all opponents of Russian communism, that is, the Soviet Union. They expected that not Khrushchev would rule them, but they would manage Khrushchev and sought to put him in the place of the deceased I.V. Stalin.

We are in Yandex Zen
Our memory. The power and greatness of the locomotive
Repentance Malenkov. Hold on top of the power in the USSR, he could not
28 comments
Information
Dear reader, to leave comments on the publication, you must to register.