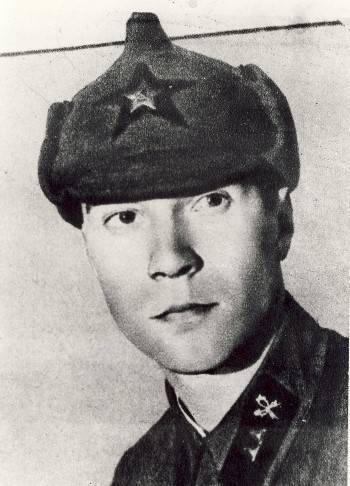 Grigory Grigorievich Pushkin is the only great-great-grandson of the poet who lived to the end of the twentieth century. His own grandfather, a brave general, Alexander Pushkin, was the favorite son of the poet. And Gregory Pushkin lived his life, having served the Fatherland as honestly and with dignity as his ancestors did.
Amazing was a man. Sage and great mocker. Direct and uncompromising, he did not like to change his beliefs, habits, or friends. All admirers of his great great-grandfather strictly divided into two categories: Pushkin scholars and “Pushkinoedov”. Probably the way it is.


By kinship, Grigory Grigorievich is the closest person to Pushkin. By the way, once the poet depicted himself in his old years. And now, when I see this Pushkin self-portrait, it seems that the poet did not draw himself, but his future great-grandson.

Grigory Pushkin continued the military baton of the Pushkin family: he fought on the fronts of Finnish and Great Patriotic War.

He was not very talkative. But his conversation, as his great great-grandfather once wrote, “was worth several pages historical notes and would be precious for posterity. " Our last conversation with him took place shortly before his death in his Moscow apartment on Marshal Tukhachevsky Street.

- Grigory Grigorievich, how was your fate?

- There was a lot of things for life: I studied at zootechnics, and I had the opportunity to become a detective operative, then a partisan. He fought, and after the war he worked as a printer. In my life I did not pursue large ranks ...

- How did you find yourself in the criminal investigation? After all, they studied something on animal science ...

- It was such a time. Called to the district committee. Awarded a ticket to serve in the Moscow Criminal Investigation Department - MUR. True, they asked if I wouldn’t give up: the work is dangerous, but they can send it to the museum, it will be calmer there. I told them that the Pushkins never ran from dangerous service. And we have a military name, combat. My grandfather, Alexander Alexandrovich, a general, fought in Bulgaria in the Russian-Turkish war. Yes, and my father was a military officer, a colonel ...

He worked at Petrovka, 38, an operative in the Oktyabrsky district of Moscow. Catching crooks, bandits, - many evil spirits were different. And when the Germans came to the capital, he voluntarily went to the partisans, and then to the front.

- Somehow I tried to ask you about the partisan exploits, and you answered all the questions: “In general, the task was completed ...”

“Then I’ll have to tell you about the partisan Grigory Pushkin, what I learned from your combat friend Alexander Kishkin.” So, on September 30, your squad near the Dorokhovo station liberated more than two hundred girls, selected by the Germans to be sent to Germany. The guerrillas were divided into groups, so it was safer to withdraw the former captives. We got out to our forest paths, hungry - there was no food. The girls, already exhausted, literally fell from their feet.

And then, fortunately, got a German. He drove boxes with biscuits and schnapps on the cart. The “charioteer” was clearly drunk and did not immediately realize that he had fallen to the partisans. Having come to his senses, he began to assure in broken Russian that he didn’t want Russia to be evil, and that before the war he studied at the University of Berlin, studied Pushkin and even read “Eugene Onegin”. At this point, the partisans laughed and somehow explained to him that Pushkin himself captured him, only the poet's great-grandson! The German refused to believe this for a long time - he was firmly convinced that all Pushkin descendants, like nobles, were shot or exiled to Solovki ...

- And how did this story end, you know?

- So, in 1965, when they celebrated the 20th anniversary of Victory, I, as a member of the Great Patriotic War, was invited to the Central House of Writers for a solemn meeting. There were foreign guests there. One of them asked a translator to help find ... great-grandson of Pushkin. He pointed him directly to me. So I met the son of Karl Müller, the very captive German, the lover of Pushkin. It turns out that Pushkin saved his life! By the way, and me too.

- We'll have to tell, Grigory Grigorievich ...

- It happened later. When I was crossing the Dnieper in September, 1943 was pretty contused. Lying in the hospital, and again in operation. The talkative commander was caught: I was trying to find out if I was a relative of Pushkin? At first I kept silent, then I had to admit ...

He even grabbed his head, shouted: after all, they will kill you there!

(It was later found out that the Korsun-Shevchenkovskaya operation was being prepared, and, most likely, I would have become one of the twenty thousand killed by our soldiers ...).

Come on, he says, I will send you to study for officer courses.

I refused, promised that I would study after the war. But the major insisted, so I got to the Kharkov military school. Surname saved.

My last name is light, funny, sonorous! You say - Pushkin, and people are smiling, reaching for you. This is a great joy, but also a heavy cross. Now that I have stepped over the 80-year mark, I can say without false modesty: I have carried it with dignity. Honor great-grandfather did not disgrace.

Grigory G. just did not live a little bit before the 200 anniversary of his great great-grandfather, to celebrate the anniversary of which he so dreamed. He died on October 17 on 1997 in a Moscow hospital for war invalids. On the eve of the cherished anniversary day of the Lyceum ...

But exactly forty years before this mournful date, in 1957, the people's artist of Russia, Vladimir Pereyaslavts, had a happy thought: to write the picture “Pushkin's Descendants are participants of the Great Patriotic War”. By the way, twelve descendants of the Russian genius, including foreign ones, fought on the fronts of World War II.

I happened to know some of the heroes imprinted on that historical canvas.

Grigory Pushkin (1913 - 1997), great-grandson of the poet. In September, 41 volunteered to join a special-purpose partisan detachment operating near Volokolamsk and Naro-Fominsk. He participated in the rear of the German forces in the Moscow region, in the most dangerous direction then. He was a scout. He was wounded at Volokolamsk, he was in the hospital. From 1942 on the Western Front. In the ranks of the First Guards Airborne Division fought under Staraya Russa. Since the summer of 1943 on the Second Ukrainian Front. Fought on the Oryol-Kursk Bulge. Freed Kharkov, Sumy, Nikolaev, Kerch. Forced the Dnieper. Finished the war as a lieutenant.

Alexander Vsevolodovich Kologrivov (1916 - 1968), the great-great-grandson of the poet. Since the beginning of the war, the cadet of the Murom School of Communications. In October, 1941 defended Moscow. Together with his military friends he held a defense under Istra and Volokolamsk.

In February, 1942-st under Vyazma was wounded in the leg, hit the hospital. And in April with the rank of junior lieutenant again goes to the front. Commander of a platoon of communication of the rifle division of the Second Belarusian Front. He forced the Oder: under heavy fire, the Germans delivered the cable necessary for communication between the units of the advancing Soviet troops in a boat. Went to Berlin.

Awarded the Order of the Red Star, combat medals.

Oleg Vsevolodovich Kologrivov (1919 - 1984), the great-great-grandson of the poet. Since the beginning of the war - in the militia. Went to the front as a volunteer. In December, 1941, near Moscow, was wounded in the leg by a fragment of a broken mine. In 1942, the mortar Oleg Kologrivov participates in breaking the blockade of Leningrad. In the battles on the Sinyavsky swamps (Volkhov Front) he was severely wounded right through the chest. Private guard Oleg Kologrivov fought under Gdov, Pskov, Porhov - in places that cherished the memory of his great ancestor. It was the first time he visited Pushkin’s Mikhailovsky. After another wound, he again became operational: he liberated the Baltic states, Poland, and East Prussia. Like the elder brother, reached Berlin.

In October of the victorious 1945, the Kologrivovy brothers accidentally, not knowing anything about each other, met in the capital of defeated Germany. Then there was a swimming competition between the fronts, and the brothers, excellent swimmers, participated in them. At the command: “Get ready for Kologrivov!” The start came out ... both siblings.

Oleg Kologrivov won one of the top places: Marshal Konstantin Rokossovsky himself shook hands with the winner.

Awarded the Order of the Red Star, combat medals.

Sergey Evgenievich Klimenko (1918 - 1990), great-great-grandson of the poet. The commander of the instrument compartment of the anti-aircraft battery. Defended against enemy raids aviation Moscow sky. His battery was located in the square of the Commune (now named after Suvorov), not far from the theater of the Soviet Army. And the headquarters of the Moscow air defense corps is located in the center of the capital, near the monument to Pushkin.

Participated in repelling the fascist tank attacks on Volokolamsk and Leningradskoe highways. In 1943 - 1944. - Cadet of the Orenburg Anti-Aircraft Artillery School. He ended the war with the rank of junior lieutenant.

He was awarded the Order of the Patriotic War, II degree, medals "For Military Merit" and "For the Defense of Moscow."

On the front since the fall of the year 1943. At seventeen, he is a cadet of the naval college in Kronstadt.

He began his service as the anti-aircraft gunner of the Red Banner Baltic fleet, sailed on minesweepers. He served on the Minsk warship as part of the gun crew, as a gun crew commander in mine sweepers. He performed the combat mission of neutralizing enemy mines and clearing passages in the waters of the Gulf of Riga and Riga.

Sergey Borisovich Pushkin (born 1925), the great-great-grandson of the poet.

At seventeen, he became a cadet of the Krasnoyarsk Aviation Technical School. He received a specialty mechanic-mechanic: returned to the system after combat missions attack aircraft "IL-2" and fighters. Victory met in Manchuria, where he served as a mechanic assault aircraft.

It has combat awards.

Sergey Borisovich Pushkin is an honored person, many years of his life are associated with work at the All-Union Scientific Research Institute of Physico-Technical and Radio Engineering Measurements. Specialist in accurate measurement of time and frequency. Chief designer of the first atomic clock in our country. Member of the Commission of the International Astronomical Union. Author of seventy scientific papers. Winner of the USSR State Prize.

Now only he is one of the descendants of the poet, the participants of the Great Patriotic War, depicted by Vladimir Pereyaslavts, alive. And he witnessed a great holiday - 70 anniversary of the Victory.