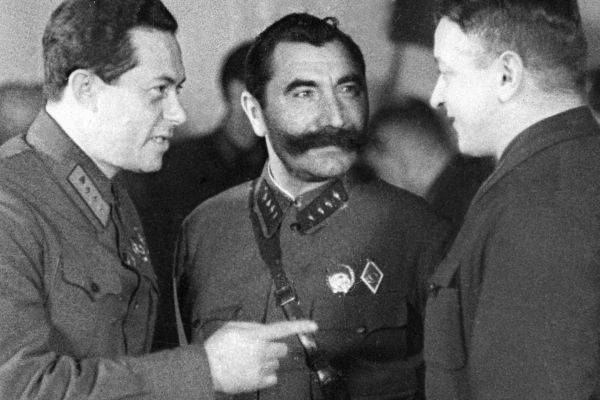 "He taught people and he learned from them"

The name Marshal of the Soviet Union, Mikhail Nikolayevich Tukhachevsky is usually associated with the concepts of "building the armed forces", "strategy" and "operational art". However, the names of a number of his printed works remind us that Tukhachevsky paid attention to tactics. That is, the art of waging not war (strategy deals with this), not an operation (a set of battles united by a single plan), but a separate battle. He paid and headed in 1925-1928 years. The headquarters of the Red Army, and commanding in 1928-1931. troops of the Leningrad Military District, and being in 1931-1937. Deputy and First Deputy Commissar of Defense (until June 1934, - Commissar for Military and Naval Affairs). In the Leningrad district, he “spent many hours, or even days,” even in such not very large tactical units as companies, “taught people and studied with them” 1; when he was his deputy, he constantly went on tactical exercises - going into battle formations and battalions, and companies, and even platoons ...

The characteristic of Tukhachevsky’s tactical views in their entirety is a subject of special study. We now select the most important thing. That which runs like a red thread through all the work and speeches of Mikhail Nikolayevich devoted to the tactics. This was the main message of tactical activity, based on initiative, courage and decisiveness of commanders, to use any opportunity to move forward through gaps in the enemy’s battle formations, so as to hit him in the most vulnerable places - on the flank and rear.

You do not have to look back to the lagging neighbors from the right and the left; you shouldn’t be equal to them, you shouldn’t “be afraid to break away from your forces”. It is necessary to "boldly, impetuously and initiatively press the enemy"! This will be the best way to interact with your neighbors in modern combat. After all, going out to the rear of the enemy, restraining a neighbor, a unit or part will thereby force this opponent to withdraw - and the neighbor will be able to move forward.

No need to look at the intermediate of those lines, which ordered the unit or unit. If the immediate task is completed, but there is an opportunity to move further, to the line, the achievement of which is envisaged by the further task, then you should not wait for an order from above, you need to move further 2! "Each part must fundamentally (highlighted by me. - A.S.) push ahead and bypass the enemy’s nests in front of her or her neighbors." "The initiative and the desire to crawl through every gap in the enemy’s order of battle should be the basic quality of every commander, especially the junior and middle commander" 3. These formulations (the first of which refers to 1927, and the second to 1935) best express Tukhachevsky’s tactical credo.

"The initiative of the youngest commanders is the basis for victory"

Whatever tactical problems Tukhachevsky could make out, he constantly returned to this idea of ​​tactical activity based on initiative and assertiveness. Yes, and other issues of tactics sought to consider it from this angle. Thus, from the Infantry Combat Regulations (BUP-1927), issued in 27, he primarily expected help in "developing courage and determination, activity, flexibility and the greatest maneuverability of infantry, which is so necessary in modern combat" 4. The tactical training method for the rifle squadron in the same year he demanded to build in such a way that the detached commander understood the task before him. Why? Because without this, "activity, advance, detour, enemy reach, climbing into its rear" 5 ... are impossible.

And in 1929, Tukhachevsky already wrote about tactical training techniques in general, but he wrote the same thing: “Our entire training methodology must be structured so that it develops tactical activity, courage, assertiveness, speed of action and mobility of troops ... By this point of view, I repeat, should be built all the classes "6.

Speaking at 27 in November 1928 at a meeting of the USSR Revolutionary Military Council on the issue of the results of combat training of the army and describing a number of specific problems (including the problem of "increasing the mobility" of troops in battle), Mikhail Nikolayevich returns to the problem at the end most. And it requires the creation in the army of "public opinion based on the statutes, which would force to act actively and decisively" 7. The commander, wrote Tukhachevsky a year earlier, "should understand that behind him, for his bold decision, which he takes at his own risk and risk, is the whole force of army education" 8.

With all the same main problem for him, he begins his speech on December 9, 1935 at a meeting of the Military Council under the People’s Commissar of Defense dedicated to the results of the school year: despite the requirements of BUP-27, “initiative, independence, wedging in the enemy’s flank and rear since then we don’t have as much as it is needed. There is a uniform, equalized movement. They are simply afraid of detachments ... I constantly had to see that the platoon commander was lying idle. Why he was not advancing tanksif the path is cleared before him? "9

A document that can be called the tactical testament of Tukhachevsky - the directive letter of the First Deputy Defense Commissar to the commanders of military districts and the commanders of corps, divisions, regiments, battalions and artillery battalions from 29 June 1936 g. to assign the commanders an equalization along the guiding part. It is the duty of each commander and fighter to move forward independently, a movement for which there is no need to wait for instructions! “After the start of the offensive, and especially during the breakthrough of the enemy’s defensive line,” the Marshal emphasized further, “the initiative of the youngest commanders is the basis of victory.” 10. 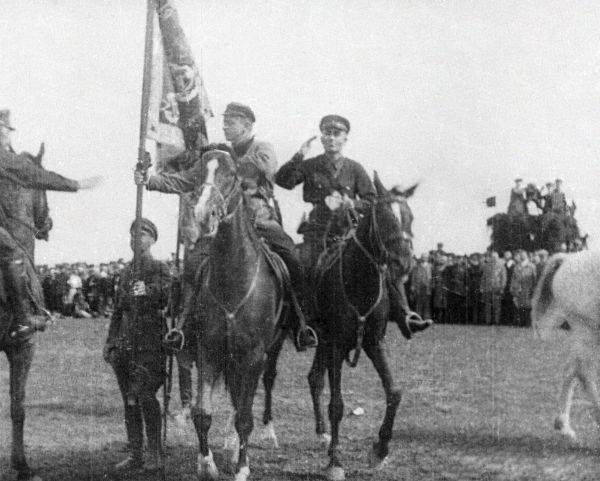 Mikhail Tukhachevsky - commander of the Western Front. 1920 g. Photo: RIA News ria.ru
Battle of Krzheshov
As you know, tactics depend on the level of development of military equipment. And, developing his tactical credo, Tukhachevsky took into account the experience of the First World War - which had made the usual weapons infantry light machine gun. Machine guns were too heavy to attach to small tactical units, and with the advent of hand-held automatic weapons, even offices began to be located (9-13 people). Thanks to this sharp increase in firepower, small infantry units became much more capable. Now, being able to outrun the enemy with a shower of lead, they could act in isolation from their neighbors, could independently penetrate the gaps in the enemy’s defenses and hold themselves on the captured line. This personally showed the German spring offensive 1918 in France.

However, Tukhachevsky himself acted in battle as he taught others later, long before 1918, even in the first weeks of the First World War, in September 1914! When the infantry company was even more similar to the company of the times of the Franco-Prussian war 1870-1871. (the only weapon of which were single-shot rifles), than to the company of the 1918-th - with light machine guns, hand grenades, steel helmets and gas masks. We mean the battle of the Life Guards Semenovsky Regiment - a junior officer of the 7 Company, which was then Lieutenant Tukhachevsky - under Krzhov in Xalic 2 (15) of September 1914, at the final stage of the Galician Battle.

Detailed information about the actions of Tukhachevsky in that battle was left by the then commander of the 7 company A.V. Ivanov-Divov 2-y11. This source can be considered quite objective. After all, the memoirist does not keep silent about his miscalculations, but criticizing Tukhachevsky, who is clearly antipathetic to him, like other white emigrants, and describes in detail the situations in which he found himself at the height of the situation. By the way, the accusation of Anatoly Vladimirovich Tukhachevsky for the failure to fulfill the duties of the assistant company commander should be rejected as almost unprovable - in view of the uncertainty of these duties. After all, there was no full-time position of assistant company commander in the Russian army. It is not by chance that the memoirist does not cite specific claims against Tukhachevsky in this regard.


Mikhail Tukhachevsky passes the banner of the 4 Cavalry Division of the Leningrad Military District on the day of its decade. A shot from the documentary "Heroes Do Not Die." Photo: RIA Novosti ria.ru
So, having received an offensive combat mission from Lieutenant Ivanov-Divov of the 2 on that day, Second Lieutenant Tukhachevsky deploys his half-heel into battle order, indicates to her the direction of movement, determines the perebezhe order — in a word, competently controls the unit in battle. And then, moving with the 1 platoon as the vanguard of the company, it acts exactly as demanded then to act from the commanders of the Red Army. Having reached the line indicated to him, seeing the lack of resistance of the enemy and knowing at the same time the general task of the regiment (to seize the bridgehead at Křešov), he, on his own initiative, continues to advance further towards the bridge over the San. His platoon attacks the Austrians departing over the bridge and, joining the 6 company of Captain F.A. Veselago, is involved in the seizure of this important object. However, he forgets to inform about the situation of the commander of his company - because of what the 7-i company is delaying its progress towards the bridge.

Interestingly, in 1927, Mr. Tukhachevsky suggested that commanders should be taught to take the initiative, including the example of their actions under Křeshov. Without specifying that the example was taken from his practice, he advised to give the student the same introductory that the situation prevailing in the section of his platoon near Křeshov: the enemy had no enemy, the neighbors were lagging behind, the overall task of the unit is known12.

In the battle of Krzheshov, of course, Tukhachevsky demonstrated precisely those qualities that his comrades in military schools knew well - not only great abilities, but also “calling for military affairs, zeal for service” and great ambition13. Together, they gave the type of commander to conduct the war of the twentieth century. However, the human material from which it was completed in the 20-x - mid 30-x. the commanders of the Red Army, the commanders of the dream of Tukhachevsky, as a rule, could not give. Not having, for the most part, even incomplete secondary education (and, therefore, sufficient mental work skills, analysis), the majority of the Red Army commanders of the Tukhachevsky times could not assess the situation and make adequate decisions as quickly as the modern battle required. A lack of outlook involuntarily prompted to cling more tightly to the little that has been learned firmly, in other words, to act according to a pattern. The Red Marshal did not wait for the initiative and decisive command personnel of the Red NXX.

Ctrl Enter
Noticed oshЫbku Highlight text and press. Ctrl + Enter
We are
Ambitious Marshal of the Soviet UnionFrom the history of own names of aircraft of Russia in 1930-ies
Military Reviewin Yandex News
Military Reviewin Google News
25 comments
Information
Dear reader, to leave comments on the publication, you must to register.