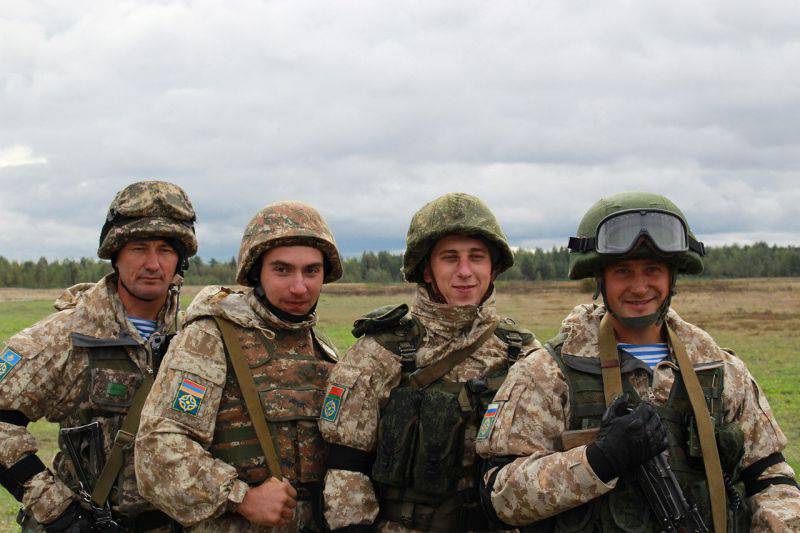 From the Middle East to Ukraine, from a terrorist attack to an armed confrontation ... The increasing destabilization in the world is more and more clearly affecting the interests of Russia and its closest political partners - the military-political bloc of the CSTO (Collective Security Treaty Organization), which includes Armenia, Belarus, Kazakhstan, Kyrgyzstan, Tajikistan. Recall that история The CSTO began in 1992 with the signing of the Collective Security Treaty in Tashkent. In 2002, an international organization was created on the basis of the treaty, at the same time the Collective Rapid Reaction Force (CRRF) was formed, the number of which is approximately 20 to thousands of people.

At what stage of interaction is OKDB at the moment, what are the main challenges facing the participating countries, what can the organization expect in the future?
The most serious and actively discussed world threat is Islamic radicalism led by the “Islamic State” (ISIS). For many members of the organization, ISIS is not an ephemeral world evil at all. The Central Asian republics, in particular Tajikistan, bordering on ever-unstable Afghanistan, without the support of influential neighbors turn into an attractive object of influence and a source of new personnel for the Islamic State. The President of Kyrgyzstan Almazbek Atambayev on this occasion declares: “A direct threat to the security of our region is the tendency of expanding influence on the territory of Afghanistan of the terrorist group ISIL. In addition, the numerous facts of recruitment and exit of citizens of our republics to participate in armed conflicts on the side of ISIL are of particular concern. ”

But even for a country like Armenia, Islamists can be a problem - they are not in Transcaucasia yet, but no one can guarantee that the militants will not pass to Azerbaijan or Turkey. For Russia, the main threat is a new wave of extremism in the North Caucasus. In the event of a real attempt to destabilize, it is possible to use the forces of the CORF or direct support to the participating countries from the Russian Armed Forces, which have fairly large military bases in Tajikistan and Armenia, and an air base in Kyrgyzstan. The efficiency of the CORF is constantly increasing, large-scale exercises are regularly held.

Among the “frozen” confrontations, it is worth noting the Nagorno-Karabakh conflict, in which Armenia and Azerbaijan, which is not part of the CSTO, are directly involved. So far from Baku there are threats of military revenge. At the moment, both sides of the conflict have accumulated significant arsenals of weapons, which means that a new outbreak of confrontation can lead to serious consequences. Armenia’s membership in the CSTO in this case serves as an absolute deterrent, not allowing the conflict to flare up with a new force. Another “powder keg” is the Tajik enclave of Vorukh in Kyrgyzstan. Around the question of his identity, small armed clashes had already occurred.

In the CSTO, the participants do what they want?

It is enough to assess the challenges facing the CSTO member countries to understand that one of the organization’s members and Russia will be involved in solving each of the problems. It is extremely difficult to imagine the armed forces of Kazakhstan or Belarus, fighting with the Azerbaijani army in alliance with the Armenian side, or Yerevan, actively participating in the operation against the Taliban on the border of Tajikistan and Afghanistan. In fact, there are not so many real ties between members of the organization - they are mostly all connected with Russia. In addition, the actions of the CSTO members are rarely coordinated with each other - this applies to the same vote on the Crimea, in which Russia was supported only by Armenia and Belarus. Another example of such “freedom” is the sale of arms by the CSTO member states to Azerbaijan, a state officially in a state of war with its Armenian ally (the peace treaty has not been signed after the cessation of hostilities in 1994).

Perhaps it was precisely the dissatisfaction of the CSTO members with the above facts that led to the decision voiced by 15 September 2015 at the CSTO summit in Dushanbe: in the future, the post of the Secretary General of the organization will become rotational. This may allow participating countries to express their position on controversial issues more clearly. Thus, Nikolai Bordyuzha, who has been in office since 2003 of the year, will give way to someone else in the near future.

To some extent, this problem is also characteristic of the NATO bloc, but there it is rather possible to talk about some “subblocks” that have a small independence of actions (and in the case of Turkey itself, quite significant). Although, of course, the United States in the North Atlantic Alliance, of course, play a decisive role.

Military-technical cooperation is the main motivation of CSTO membership

The PTS is one of the most active areas of interaction between the countries belonging to the CSTO. The main prerequisite for this is the ability to purchase weapons from Russia at preferential prices, almost the same as for the Ministry of Defense of the Russian Federation. This opportunity is most actively used by Belarus, Kazakhstan and Armenia, constantly acquiring large quantities of weapons, including the most modern ones. Thus, Kazakhstan acquired a batch of Su-30CM multi-role fighters and free of charge received five C-300PS anti-aircraft missile systems (ZRK) divisions.

Belarus in the past two months has signed several contracts. One of them is for the supply of a short-range Tor-M2K SAM system in the amount of five units. This deal is interesting because the air defense missile system is located on the wheeled chassis produced by the Minsk plant of wheeled tractors (MZKT), that is, it is actually a product of cooperation. In addition, Belarus is becoming one of the largest foreign customers of the newest Yak-130 combat fighter jets, able to imitate the behavior of various modern machines. Minsk has already received four airplanes (out of eight contracted), ordered as many more, and intends to launch another eight Yak-130 later, bringing their total number to 20. Also, Belarus purchased the 59H6М Opponnik-G radar and a number of upgraded BTR-82A armored personnel carriers. In addition, the country, along with Armenia and Kazakhstan, received several divisions of the C-300PS air defense system free of charge.

Kyrgyzstan and Tajikistan, even despite the benefits, cannot afford to make major purchases - the military budgets of these countries are barely enough for basic clothing and keeping the army in any combat-worthy condition. Small supplies weapons from Russia there are, but it is mainly equipment and ammunition from warehouses, transferred free of charge.

Cooperation in the military-industrial complex - is it necessary to replace Ukrainian products with Belarus?

In the light of the introduction of anti-Russian sanctions by Western countries and the breakdown of military-technical cooperation with Ukraine, which produced a number of important components necessary for the production of Russian weapons, along with import substitution, which is not always possible in a short time, new suppliers are needed. At the same time, despite the large number of signed documents related to cooperation in the production of weapons (both within the CSTO and directly between the member countries of the bloc), success is not as significant as we would like. Here you should pay attention to each of the CSTO participants.

Belarus is clearly a leader in the field of military-technical cooperation. What is the Minsk Wheel Tractor Plant (MZKT) that manufactures the chassis for the most varied Russian military equipment - from Topol-M and Yars mobile intercontinental ballistic missiles to the S-400 air defense missile systems and Iskander tactical missile systems. Belarusian enterprises are connected with at least 400 Russian plants. Among the “sanctions” novelties, it is worth noting the production of thermal imaging sights for self-propelled anti-tank missile systems “Chrysanthem-S”, which have been debugged as soon as possible by the Belarusian company “Peleng”, which will replace the Ukrainian counterpart. Belarus also participates in new Russian projects: for example, at the MAX-2015 Almaz-Antey air show, which took place in August, showed the UAV of a helicopter-type radar reconnaissance drone, which is the Belarusian basis of a helicopter UAV, which the Russian payload is loaded into - cameras and radar. As for the Belarusian innovations, they also have a lot of Russian components. Nevertheless, one cannot say that Belarus will be able to really replace most of the Western and Ukrainian components.

The contribution of Kazakhstan to the Russian military industrial complex is minimal. Here it is more about the Russian enterprises in Kazakhstan, producing products for the Kazakh army. An example is the JSC Ural Plant Zenit (located in the Kazakhstani city of Uralsk), producing rocket-artillery boats of the 0250 project under license. There are enterprises engaged in the repair of equipment, producing ammunition, communications equipment, etc. However, all this production is still of little interest to Russian weapons manufacturers.
The military-industrial complex of Armenia is also more focused on its market - although there are minimal supplies to Russian manufacturers. This mainly concerns some components used in radio electronics. Some of the enterprises were bought by Russia, but they have not yet received serious development. In recent years, Armenia opened service centers for the repair of military equipment, made many statements and signed many papers, but no real “breakthrough” has been observed.

As for Tajikistan and Kyrgyzstan, here everything rests on the very low level of the economies of these countries, which are unlikely to be able to produce competitive military products in the near future.
As we can see, the issues of cooperation in the military-industrial complex among the CSTO countries are not fully compliant with the statements, and the issue of import substitution cannot be resolved only with products from Belarus.

But another question arises - should Russia, which was located in many areas, depending on the Ukrainian military-industrial complex, now become dependent on Minsk? The political situation now is such that it is possible and “do not have time to blink an eye,” as an ally will begin to rapidly change its friendly position. Therefore, the priority should still be to deploy the production of key components of military equipment in Russia, even if it is longer, harder and more expensive. The situation that has developed not on the Russian initiative must be maximally used in its own interests.

“Today we are faced with an escalation of tension in the zones of smoldering conflict, open hostilities and the emergence of new hotbeds of instability, including near our borders. In such a situation, it is necessary to strengthen the military power and crisis response mechanisms of the CSTO, ”- the President of Belarus Alexander Lukashenko

“Our actions should be based on the need to take into account allied obligations and the opinions of partners, jointly countering initiatives that run counter to the interests of one or several CSTO member states,” President Serzh Sargsyan

“I really wouldn’t want us to have on our border tomorrow what Europe has today, since mass migration of people brings massive security problems for people and the state,” CSTO Secretary General Nikolai Bordyuzha

Ctrl Enter
Noticed a mistake Highlight text and press. Ctrl + Enter
We are
Military reform as an integral part of the security concept of the Russian Federation: Systematic dynamic assessmentMissed chapter "Strategy-2020"
15 comments
Information
Dear reader, to leave comments on the publication, you must to register.