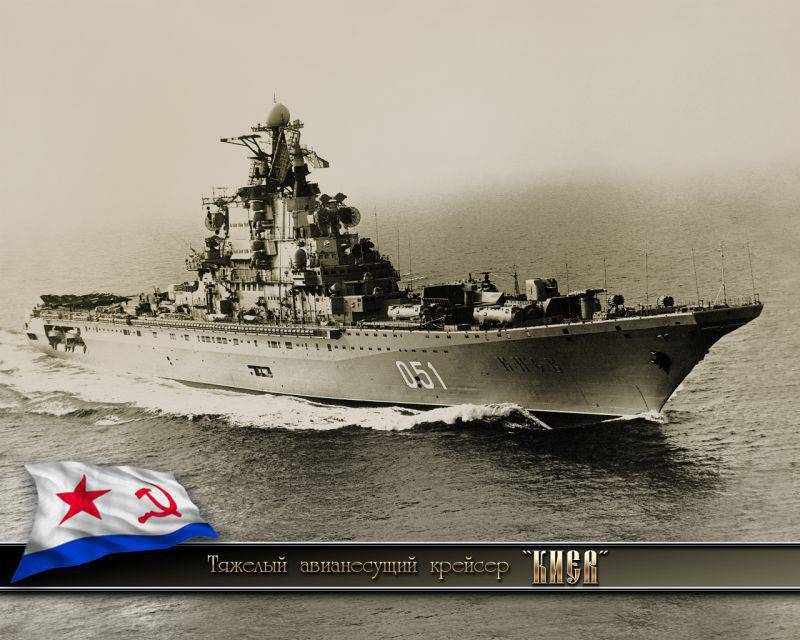 Explanatory note to the article on heavy aircraft-carrying cruisers of the 1143 Ave., published on “VO” a week ago. History with “Ships of Armageddon” severely criticized my point of view on the adequacy of the construction of these monsters. And if so, will have to keep the answer to readers.

Appearing as a kind of “hybrid” of a missile cruiser and an aircraft carrier, the Soviet TAKR proved to be ineffective in the role of a cruiser and completely untenable as an aircraft carrier. With a length of 273 meter and a displacement of 40 thousand tons in terms of the composition of its weapons, the “super cruiser” corresponded to a large anti-submarine ship (which was six times smaller than the “super cruiser”).

As for the wing, absolutely amazing things were happening there. For example, the “vertical” of the Yak-38. With subsonic flight speed, without radar and with a fuel reserve for 10 minutes of flight. “Soared-scared-sat”. The pilots of the American “Tomcats” did not care that the “Yak” was classified as an “attack aircraft”. Beat something will not on the passport, but in the face. However, even as a strike aircraft, the “Yak”, to put it mildly, looks suspicious. Funny combat load and range, minimal survivability, lack of aiming and navigation equipment for working in adverse weather conditions.

Squadron anti-submarine helicopters? An 273-meter monster was absolutely necessary to base it.

And in general, what is this dispute about? For 20 years before the Soviet aircraft-carrying cruisers in France, the aircraft carrier “Clemenceau” was built. With smaller dimensions than TAKR, he carried a full-fledged air wing, incl. airplanes with horizontal takeoff and landing. In 1990's, powerful supersonic Super Etandars were based on it. And this is a completely different level. And for much less money.

The construction of the TAVKR was a mistake and a meaningless waste of money. At the same time repeated four times in a row. 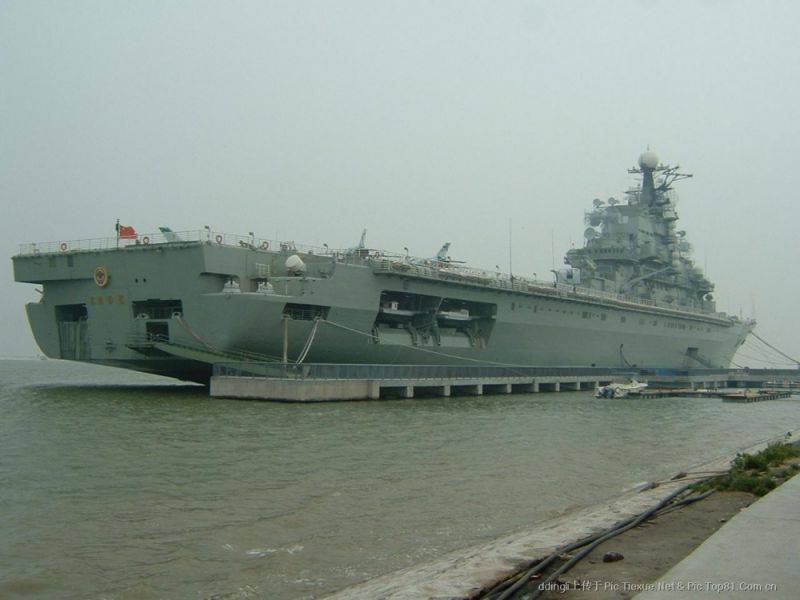 My dear opponent Andrei Kolobov suggests looking at the situation from a different angle. It is alarming that the author, usually deliberately carefully checking the information, so freely interprets the facts and abuses very strange conclusions.

It is also possible that S.G. Gorshkov considered such a “Machiavellian” plan: based on the results of operating the TAKR project 1143, justify the mismatch of tasks the aircraft carrying cruiser to the capabilities of his wing. In any case, it should be taken into account that the tasks that were formulated in 1968 for the TAKR of the 1143 project could not be solved by the air group with VTOL and SG Gorshkov could not know about it.

Since the top management and even the commander-in-chief himself were involved in the case, then, indeed, it is better to refrain from searching for the guilty.

Another couple of such “Machiavellian plans” and full-scale experiments with the 273-meter “vundervaflay”, and the budget will go to the seams.

But why did the Soviet Navy need this “ideal” helicopter carrier?

TAKR was not a helicopter carrier. During the combat services, “Kiev” and its sisterships were engaged in what they were created for: the operation of useless VTOL aircraft. 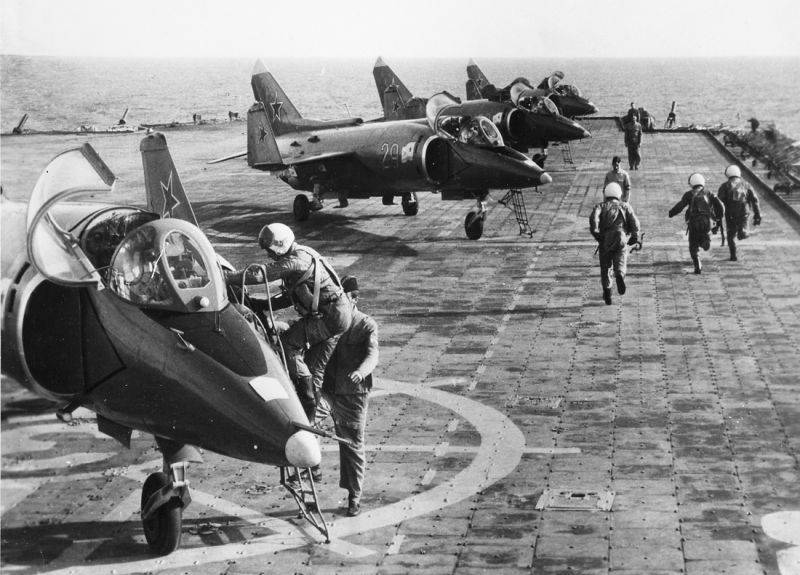 And the heavy aircraft-carrying cruisers of Project 1143 could well become the backbone of the defense of such areas - operating in the near sea zone, they perfectly complemented the actions of the ground anti-submarine aviation.

They were not allowed to operate in the near sea zone by pride.

Brief chronology of the service of the aircraft-carrying cruiser “Minsk”:

In the summer of 1980, the campaign in Vietnam, the port of Cam Ranh. During the campaigns of military service in December 1982 of the year “Minsk” was visited by Bombay, in July of 1986 of the year - Wonsan

TAKRy spent all the time on long hikes, pretending that they - these aircraft carriers. And to cover the “protected combat areas” in the near sea zone is work for the gray mass of the “third rank”: numerous patrol and small anti-submarine ships. Which in the composition of the Navy of the USSR had 530 pieces.

Is it higher than that of nuclear submarine missile-carriers and their “colleagues” from the squadron “41 on guard of Freedom"?

Say what you like, but a helicopter is a terrible enemy of a submariner

At that time (as now), the most terrible enemy is an under-sonar sonar in conjunction with a towed low-frequency antenna, supplemented by a dozen missile torpedoes (Rastrub, Waterfall, foreign ASROK) on board the ship. None of the RSL is comparable in terms of detection capabilities with the ship's SSC consisting of thousands of hydrophones. Ship complexes are less dependent on weather conditions and, if there is contact, they are able to destroy the submarine in a matter of minutes.

Interestingly, for the tasks of escorting AUG in the Mediterranean, our 1143 TAKRs might have been even better suited than classic aircraft carriers.

There is not a single task with which the TAVKR could cope better than the classic aircraft carrier.

But after all, the very concept of 5 OPESK, which was supposed to die, at the same time mutilated the enemy ... What can you say? Only that the prowess of our crews, who took up combat duty, being doomed to death in the event of a conflict, deserves all the respect and memory of grateful descendants.

Those who die immediately may turn out to be happier than the survivors of the world nuclear apocalypse.

If they survive at all.

So there is no need for cheap melodramas, every citizen of the Union had a risk of burning in nuclear fire.

After increasing the range of US-based ballistic missiles of the sea based, their "city killers" no longer had reasons to deploy in the near-sea zone of the USSR.

No sooner had the leading "Kiev" come into operation, "Francis Kay" (1979 year) went out for combat patrols. The first SSBN, armed with the Trident-I complex. A terrible war machine was able to throw 8 warheads at a distance of 7400 km. American boats were able to shell all of Siberia from the Philippine Sea - right up to the Ural Mountains. As well as shoot on the territory of the USSR directly from the shores of the United States.

A lot of unflattering words were said about the presence of heavy missile armaments on our TAKRs - the Basalt anti-ship missiles.

Yes, there everything looks strange.

For some reason, a quarter-kilometer ship was carrying 10 torpedo tubes and paired 76-mm artillery mounts of unclear purpose (too weak caliber for firing at any ships and ground targets; in terms of air defense, it is more useless than AK-726 to invent difficult).

But there is a nuance - in the USSR neither in 70-ies, nor later was there at all the abundance of heavy ships capable of carrying long-range anti-ship missiles "Basalt" / "Granit".

But did the RCC on the flood ships need it at all? The USSR Navy had 60 nuclear submarines with cruise missiles. Such a “squadron” could sweep everything in its path! 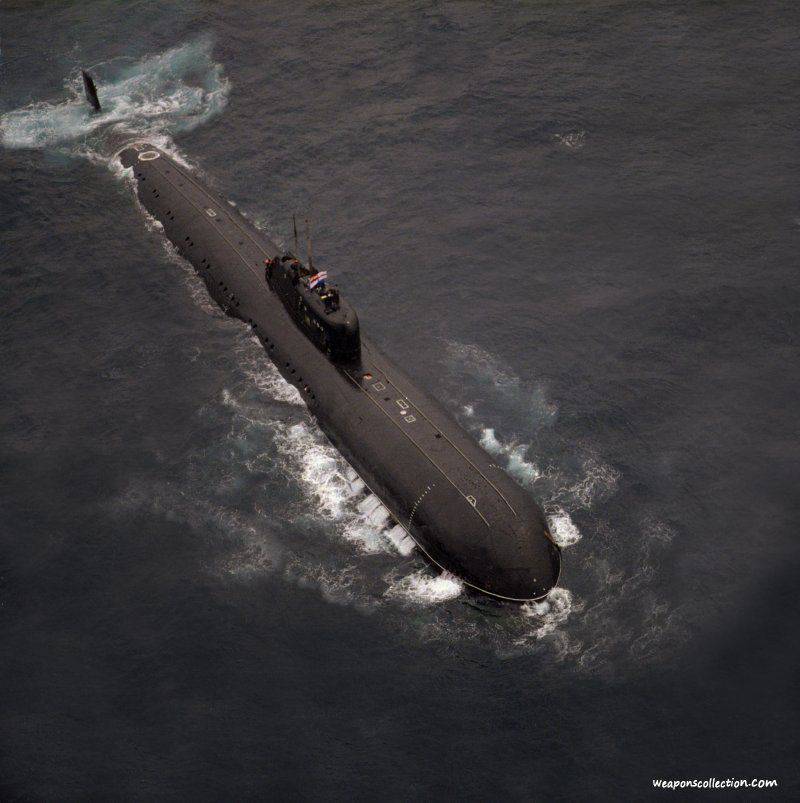 However, it was necessary to unbind RCC on the first domestic "aircraft carrier".

The statement that the “Kiev” air defense system was quickly outdated due to the advent of C-300, in my opinion, is not quite true.

The “Kiev” air defense system became obsolete with the advent of new threats, primarily with the massive appearance of anti-ship missiles. The omnipresent “Harpoons”, “Exosets” and “Tomahawks” (TASM), capable of being launched from any ship and aircraft.

But still, the 1143 TAKRs did not become useless ships.

Yes, at least it was where to play football. 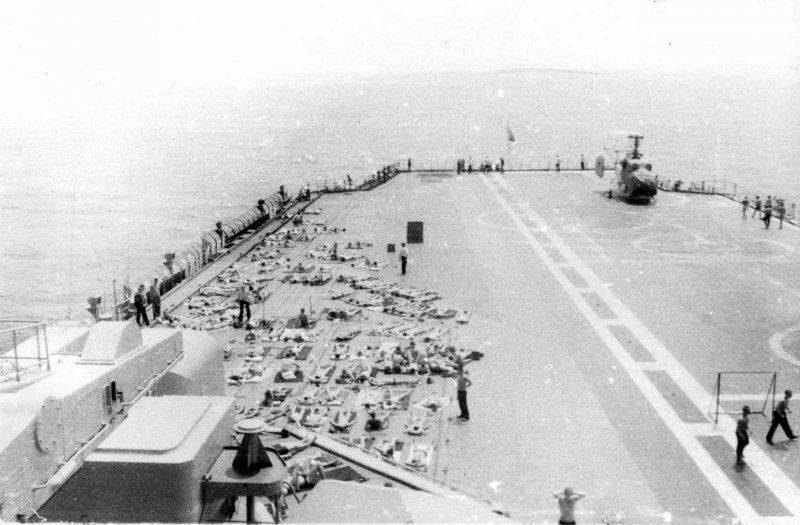 Fighting service in the Mediterranean. That is why the Yankees were afraid of slippery black fishes from the depths of the sea, and aircraft carriers were not even considered by them as a real threat.

The fleet finally got some kind of carrier-based aircraft and set about developing a new one for itself. weapons, thereby gaining invaluable experience.

We always get experience when we don’t get what we want.