October 20 2015
45
At one time, the "friends of Russia" came to the realization that the more intrusive attempts to push the incarnation of Maidan in Russia through the "center" (through Moscow) are made, the more negative these people evoke from the population. After all, there is a broadcast of federal TV channels, major media outlets describe these events from all angles, and grant-eaters seem to be in plain sight - and not only among their main sponsors, but also in plain sight of those who are clearly not going to calmly contemplate “trying to leg.


Virtually any rally of granto-eaters from the Moscow spill instead of tens of thousands of supporters (as was the case in 2011-2012) brings together several hundred (in the best case for their curators) people, which by definition does not fit into the scheme provided for by the authors of the anti-constitutional script coups.

For some time now, they have been trying to minimize the difficulties encountered in exporting Maidan to Russia using a relatively new method. The technique consists in an attempt to create groups of influence agents acting not in front of everyone - in the federal center, but away from the capital. The ideal option is where overseas consulates operate in Russia and at the same time the positions of those who have what is called a liberal flavor are relatively strong.

One of these options is Ekaterinburg. Here, as they say, everything came together: is it far from Moscow? - long away; Is the US Consulate General present? - present; Yes, and in the governors - the subject who calls himself an oppositionist - Yevgeny Roizman. Overseas "friends" decided that it was a sin not to take advantage of the situation, and this decision has clearly made itself felt recently.

An event that attracts attention is the appointment of the new US Consul General in Yekaterinburg, Mr. Marcus Micheli, a Vermont native 1965, a graduate of the Higher Naval College, and a student at Columbia University, less than 2 months ago. This is another “long-playing” American diplomat, whose work has identified Eastern Europe, including the Russian Federation.

On the working way of Mr. General Consul Micheli it is necessary to stop separately. The fact is that Micheli started his foreign diplomatic career in Russia (in Moscow) - in 1992 year - with the rank of an ordinary employee of the American embassy. If we take into account that at that moment the country was actually under external control, then we can state, not without confidence, that Marcus Micheli had gained managerial experience with puppets already then. In 1994, he was transferred to other Eastern European directions, giving the opportunity to "new" American diplomats to gain experience in interacting with dolls on strings, which were then in power was in abundance. After working in Warsaw, Kiev and Sarajevo, Mr. Micheli was again transferred to Russia (2002 year), where the authorities began to get rid of puppet ropes.

An important aspect of Mr. Micheli’s biography relates to his work in Moldova from 2007 to 2009 years. This is precisely the period when a surge of "orange mood" went through a number of countries in the post-Soviet space, bringing openly pro-American authorities to power. Washington was going to finally take over the Moldovan statehood, and therefore immediately after the announcement of the results of parliamentary elections (spring 2009 of the year), the Moldovan communists celebrated with a huge margin, a massive rally with clashes of Moldovan "maydanuts" with the police drew a huge margin. The events in Moldova at that time were called the “brick revolution” due to the fact that bricks and stones became one of the main means of “influencing” the police from those who were given a bright future by the EU and the final break in relations with Russia for a couple of green candy wrappers. After the clashes in Chisinau, much more criminal cases were initiated against Moldovan police officers than against those who became the fighting force of the Kishinev (actually) coup. Moldovan police officers, as the human rights defenders told the grants, were accused of abuse of office and even of torture of detainees.

Before arriving in Yekaterinburg, Mr. Micheli was Director for Central and Eastern European Affairs of the National Security Council, and also worked in the Committee on Foreign Affairs of the House of Representatives. 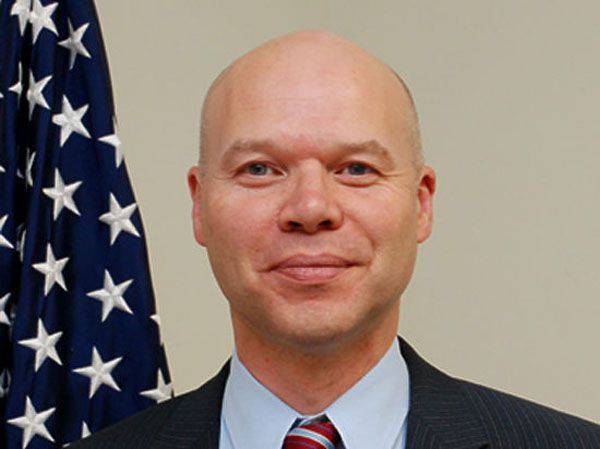 As you can see, Mr. Micheli’s experience is great, and the State Department of the United States simply couldn’t help but take advantage of this experience - at least, now hopes that Micheli in Yekaterinburg will say its word ...

But God bless him with this Micheli (for the time being), here he draws attention not so much to himself, as to the stormy reception with which the representatives of the local authorities noted the new general consul. In the blogs morozov66 и zergulio materials have appeared that tell about the organization of the reception of a dear guest. More precisely, everything turned out in such a way that some city officials became guests in Yekaterinburg, and Mr. Mikeli just showed himself to be such a master of the situation.

So, in the hotel Hyatt Regencythat in Yekaterinburg, on B. Yeltsin Street, the meeting of the handshake was arranged as “An Evening of New Orleans Jazz” and “a solemn reception in honor of the 25 anniversary of the unification of Germany”. And, as it turned out, not all jazz music fans could get into the hotel, although initially it was reported that to attend the event it was enough to present a passport, for admission is free, I mean free ... However, when cars with diplomatic numbers of the American consular mission began to approach the hotel it became clear who “orders the music” and why ordinary mortals could not enjoy the notes of the New Orleans jazz. 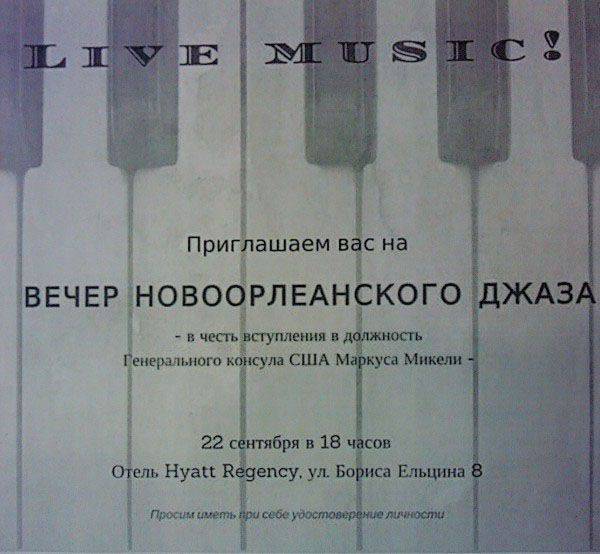 The doors of the “jazz event” were open to such admirers (who would have thought) of African-American motives as Mayor of Yekaterinburg Yevgeny Roizman, deputies of the Yekaterinburg City Council Konstantin Kiselev and Dmitry Golovin (both are “Civic Platform”). At the same time, bloggers noticed that the officials arrived at the hotel to “listen to jazz”, accompanied by young charming women, the relations of those in power with whom they did not give the opportunity to suspect that they were their daughters or, say, nieces ...

It was noticed that in Mr. Roizman’s LiveJournal (and the magazine has a loud title "Power is in the truth") The truth about the meeting with the newly-made American "viceroy" is not mentioned in a strange way. There is information about the invitation by the mayor of Yerevan, but there is no information about the invitation by Mr. Micheli ... Aleo, so what's the truth about what the mayor of one of the largest cities of Russia could discuss with an overseas official during "listening to jazz compositions" or receiving " German themes ”? .. And why the Russians never heard anything about any of the Russian consuls in the United States organizing for the mayor, for example, San Francisco, in one of the hotels a concert of Russian tunemakers or a seminar on the reunification of Crimea with Russia, and so on from the concert (seminar) arrived not only the mayor, but also a number of deputies of Gdańsk "City Council"? ..

And some Yekaterinburg officials did not just arrive at the hotel with Mr. Micheli, but they also remained, as they say, one-on-one-for-an-hour or two - for a "glass of tea." Has there really been a discussion of how the New Orleans jazz is developing in the world, or what jazz compositions are in vogue in the Urals? ..

I don't want to talk about this topic, but for some reason I remembered: “Today you play jazz, and tomorrow ...” That “tomorrow” is well known ... True, in this case you don’t “play”, but “listen with the American Consul General”. Truly, the popular wisdom, which seemed to give a clear marasmus, finds an unexpected embodiment in the new reality ... It seems that Mr. Micheli is still not fully acquainted with the Russian oral folk art ...

Video of the personal meeting of the deputy of the city duma of Yekaterinburg Konstantin Kiselev with the “friend” Micheli in the restaurant (YouTube channel Ivan Morozov):

It would seem, what common interests can be in the US diplomatic envoy and the Yekaterinburg deputy? A certain light on these “common interests” sheds историяwhich happened not so long ago with Mr. Micheli. He was played by a pranker who came out to Micheli through the American ambassador and presented himself as Ukrainian Foreign Minister Arsen Avakov. Mikeli told Avakov's pranker that the United States would continue to provide military-technical and financial assistance to Ukraine, adding that the amount of additional assistance would be 46 million dollars. The author of the recording (presented on the YouTube channel by the publication “On the Eve”) reports that it was made about a year ago - when Poroshenko addressed the Congress, and when Micheli was not yet appointed to a diplomatic post in Yekaterinburg. Information about the authenticity of the conversation in the US State Department did not comment.

That is, Mikeli appeared on the fact that at least he had information about the amount of funding for the punitive operation of the Ukrainian security forces in the Donbas from the US budget, and that through him information about military financial assistance to Ukraine was clearly not without reason.

But who is this deputy Kiselev? 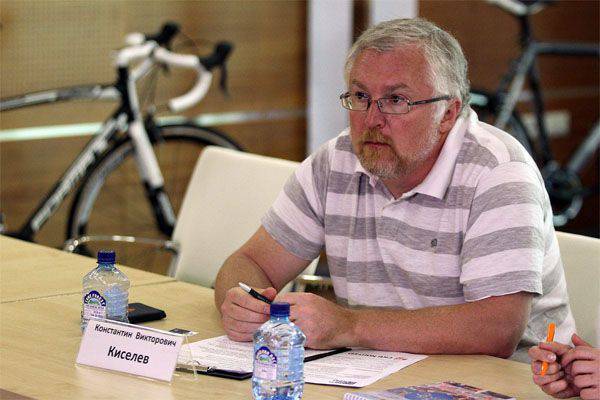 This man at one time appealed to fellow citizens, explaining the need to create a "Ural Republic." The same person tried to organize a videoconference with Dmitry Yarosh - a man against whom the RF IC opened a criminal case on suspicion of his participation in the Chechen campaign on the side of the militants. And the same person, having contacts with the Ukrainian citizens of the liberal-ideological “bottling”, was one of the ideological inspirers of the so-called “Peace March” in Yekaterinburg, where they gathered under the slogans with a claim to pacifism and (to the heap) to fight fascism why something more actively exaggerated not the topic of fraternization with the Ukrainian people, but the fact that “everything was lost in Russia, and how good it is that Ukraine won Maidan” ...

Based on this information, we can conclude that the circle of agents of influence (and it was formed before Marcus Micheli arrived in Yekaterinburg) kept the US diplomatic mission in the region, and clearly continues to make its bets on this circle. What then is at stake? - it is clear from the “diplomatic” achievements of Mr. Micheli in the same Moldavia and from the direction of the work that the local grant-eaters with parliamentary or other official crusts are trying to do in the city. At stake is the very existence of Russia as an independent state in its current borders, because, apparently, the American "friends" are not at all going to throw in the trash bin a training manual that did not help them organize a full-fledged "Maidan."

Ctrl Enter
Noticed a mistake Highlight text and press. Ctrl + Enter
We are
How did grant grandees decide to use truckers ’protest actions?Results of the week. "Aria of the Moscow Guest"
45 comments
Information
Dear reader, to leave comments on the publication, you must to register.