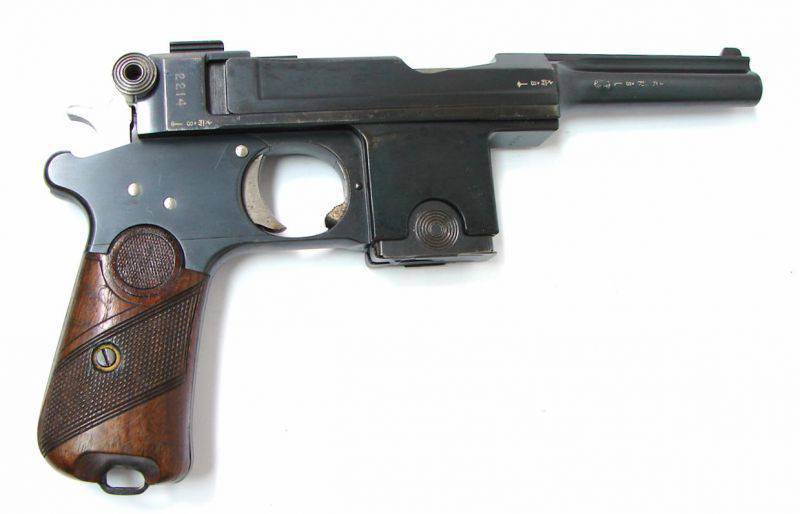 Failing to order the production of 3000 pistols by Bergmann-Mars, Theodore Bergmann sold his Spanish order to the Belgian company Anciens Etablissements Pieper (AEP). In addition to this order, the company AEP, which produces weapon under the brand name Bayard (Bayard), acquires the right to manufacture Bergmann pistols for commercial purposes. Soon Bergmanns Industriewerke abandons the production of short-barreled weapons and specializes in the manufacture of machine guns.

Having received the first batch of pistols, the Spaniards turn to the Piper company and ask them to refine the weapon. The upgraded pistol was named M 1908 Bergmann Bayard. 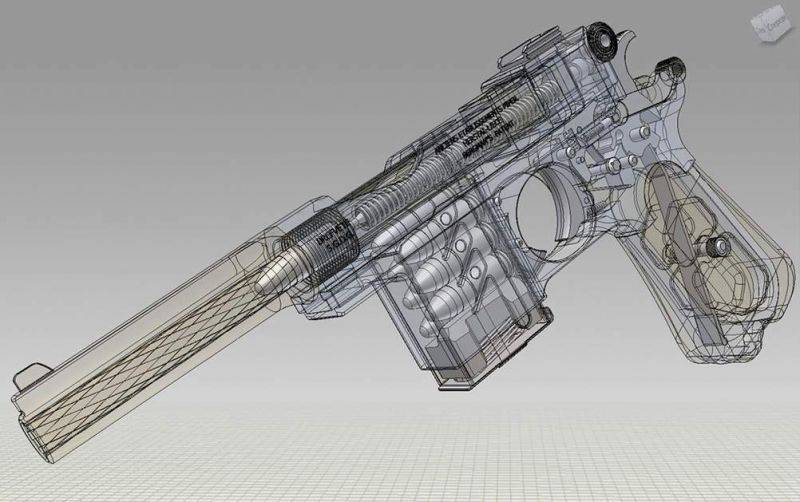 The gun Bergmann Bayard M 1908 of the year has a design similar to the gun Bergman Mars. The changes affected only the appearance of the weapon and the design of the disconnector. The barrel of a pistol M 1908 Bergmann Bayard has six left-side rifling, Bergmann Mars had four right-side rifling. The shape of the pistol grip, the configuration of the receiver and the shape of the front sight have changed. 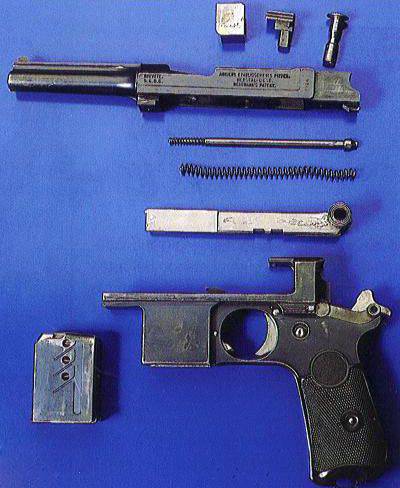 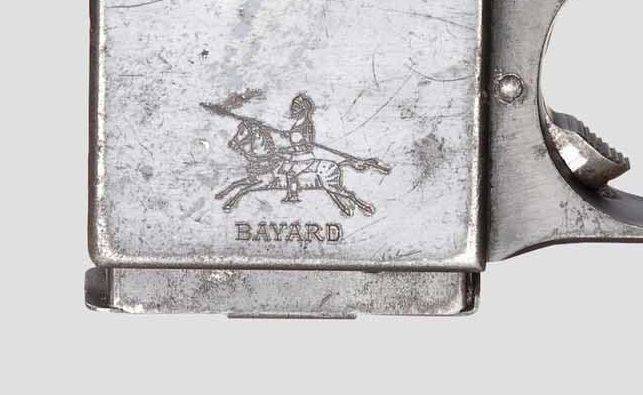 A characteristic feature of pistols by Bergman Bayard is the presence of a stigma on the left side of the frame in the area where the store is located. The stamp is an image of a knight galloping on a horse and the inscription “BAYARD” under it. 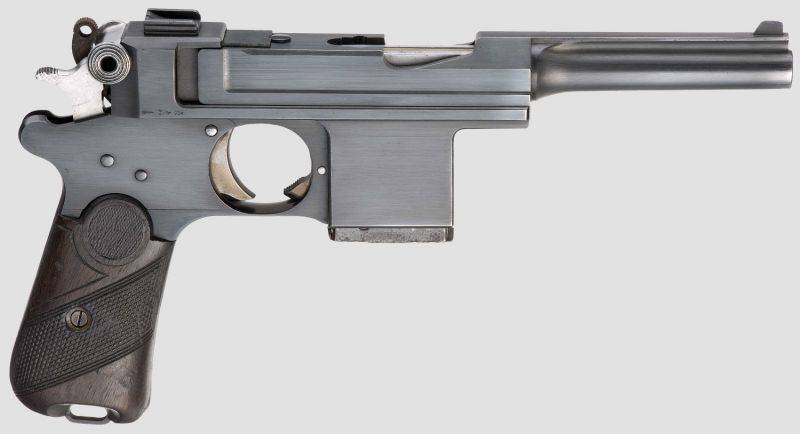 Bergmann Bayard pistols have decreased compared to Mars barrel length to 102 mm. The barrel began to do not screwed into the receiver, and made at the same time with it. 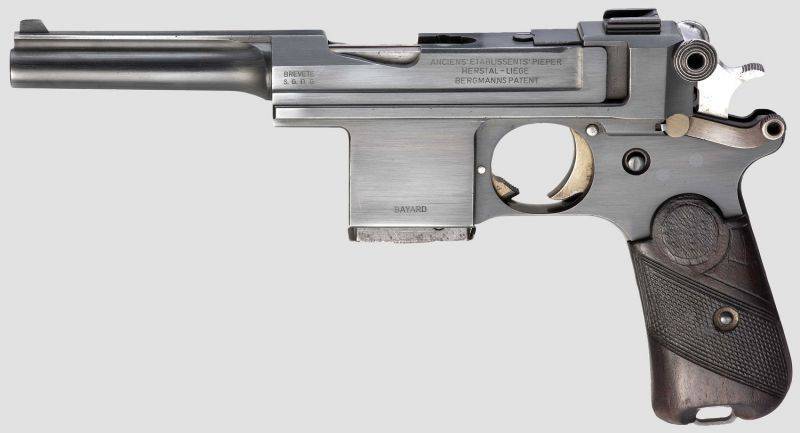 Some pistols have simplified marking. On the left side of the frame they have only the inscription "BAYARD", without the image of a knight. 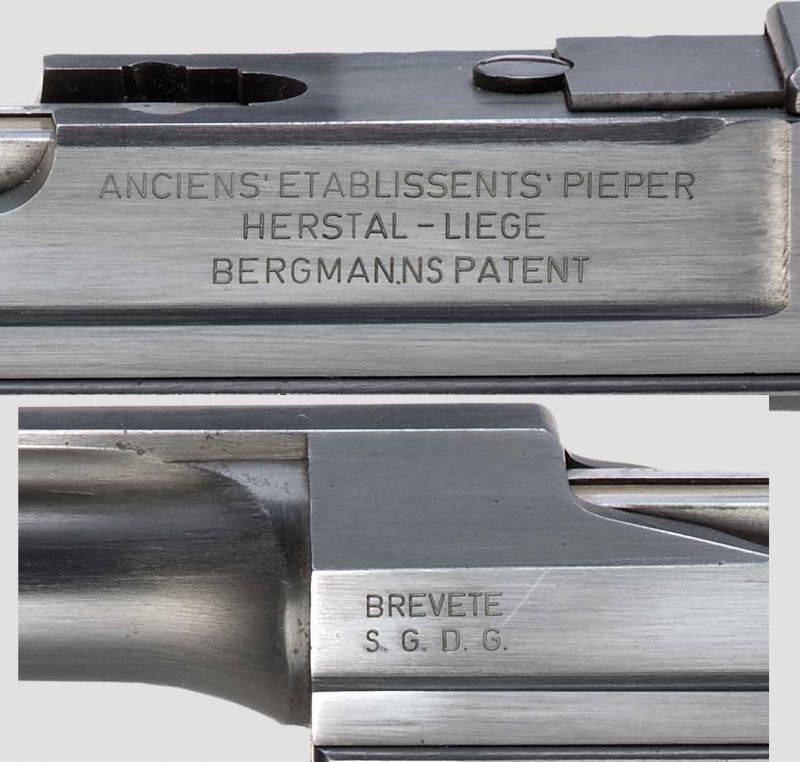 Marking weapons at this time is a text on the left side of the receiver "ANCIENS ETABLISSEMENTS PIEPER / HERSTAL-LIEGE / BERGMANN'S PATENT" and "BREVETE / SGDG". 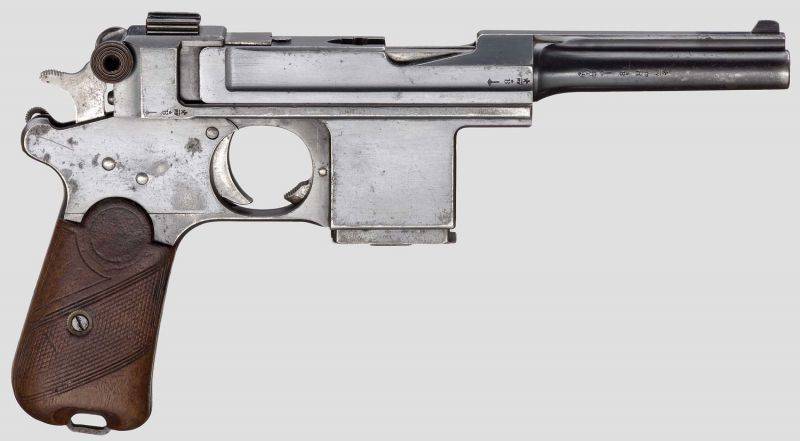 After completing the Spanish military order, Bergmann Bayard M 1908 begin to produce for commercial purposes. AEP sends a pistol for testing to the UK and Denmark. 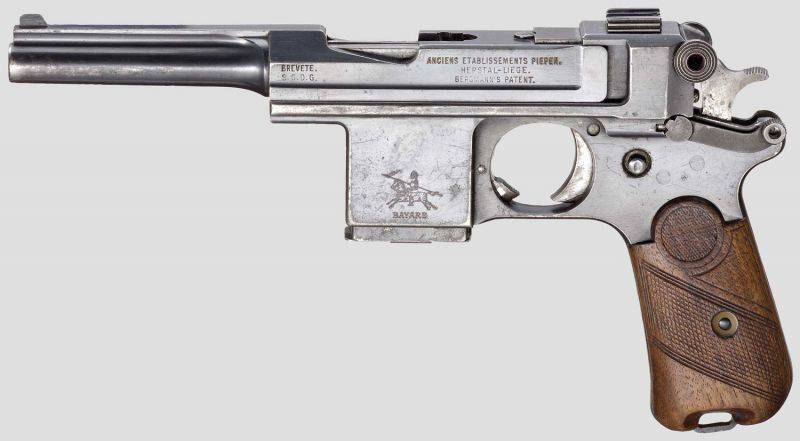 In 1910, the British sent a negative review about the weapon with the refusal to buy it. The Danes, on the other hand, placed an order for the manufacture of 4840 pistols, subject to the modernization of the Bergmann Bayard 1908 model of the year. 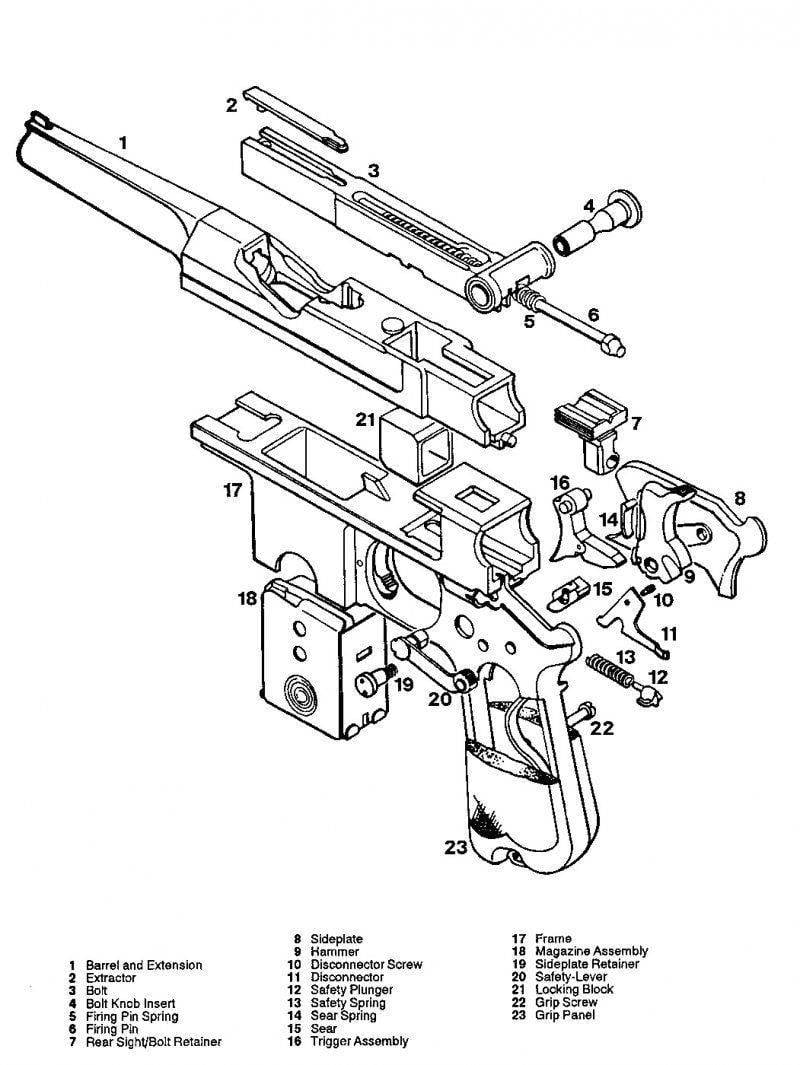 The Danes demanded to make cuts in the frame of the pistol, in the place of installation of the store, as well as the grooved side surfaces of the store for easy retrieval. The flat spring was supposed to be replaced by an S-shaped spring. The increase was required for the cheeks of the pistol grip and the magazine latch. 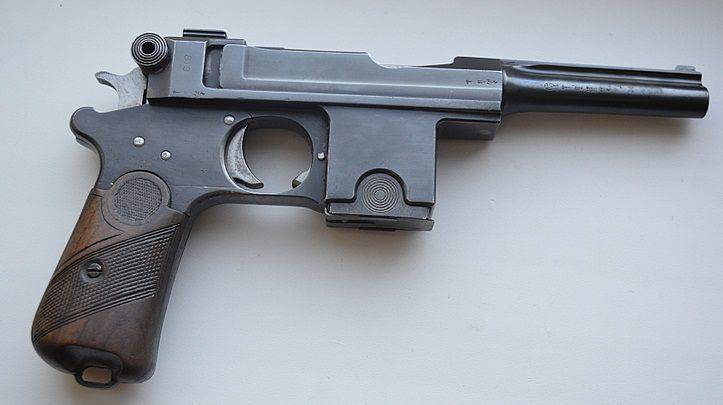 Piper quickly upgraded the weapon, and already in 1911, he began supplying pistols called Bergmann Bayard Model 1910 of the Year (M 1910 Bergmann Bayard). The external distinguishing feature of the 1910 model pistols of the year are cutouts in the frame for easy magazine removal and concentric notches on the sides of the magazine. 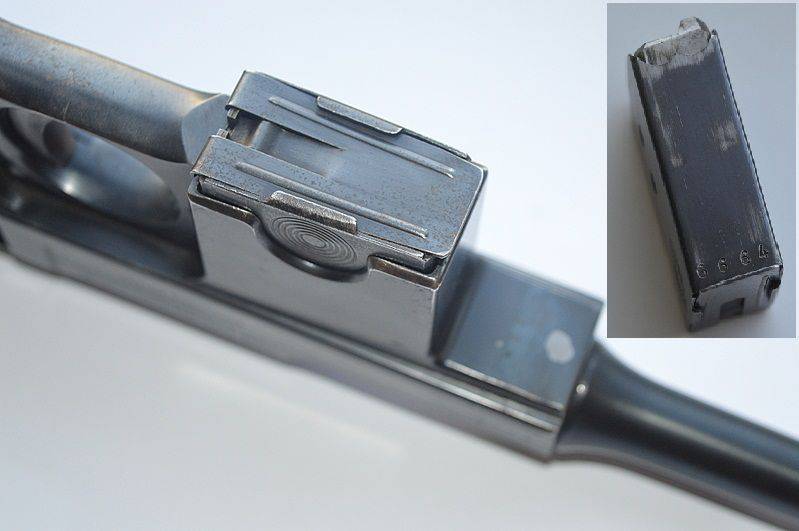 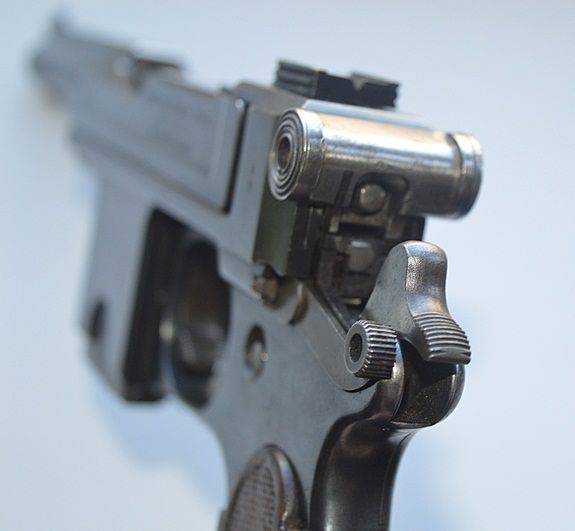 The trigger mechanism of the pistol is the same - single with the external location of the trigger. The fuse is also still located on the left side of the frame at the trigger. 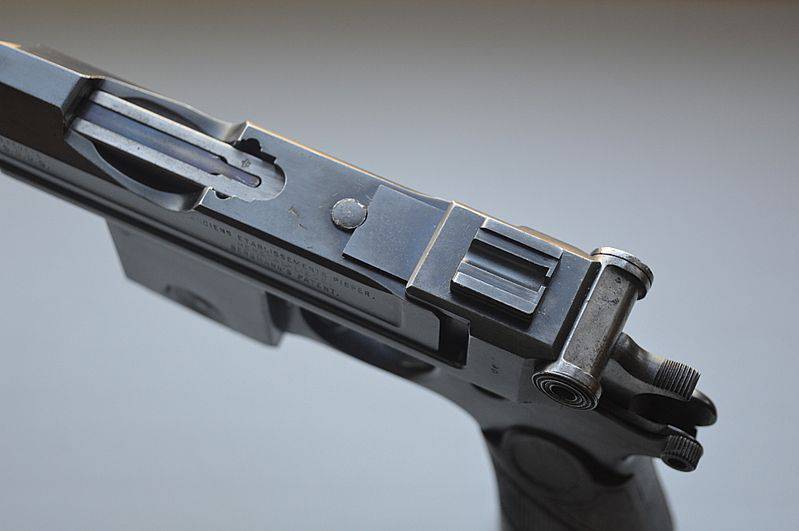 Automatic pistol Bergmann Bayard, like its predecessor, built on the short course of the barrel and locking the gate with a vertical wedge. 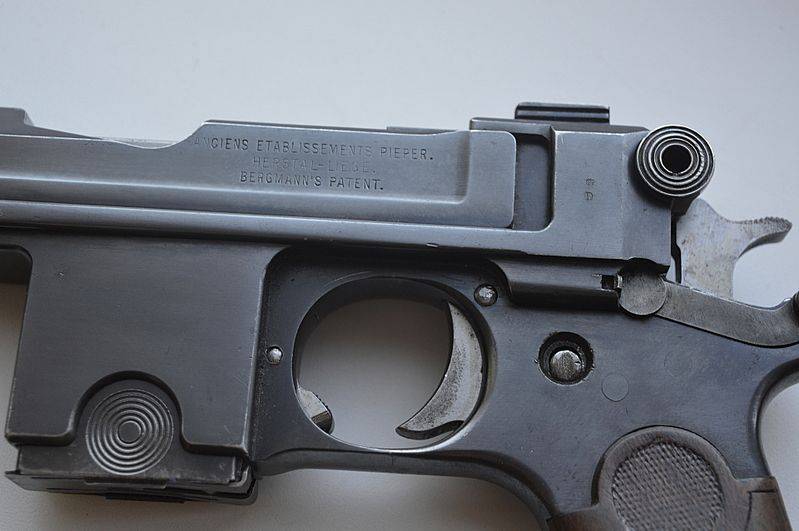 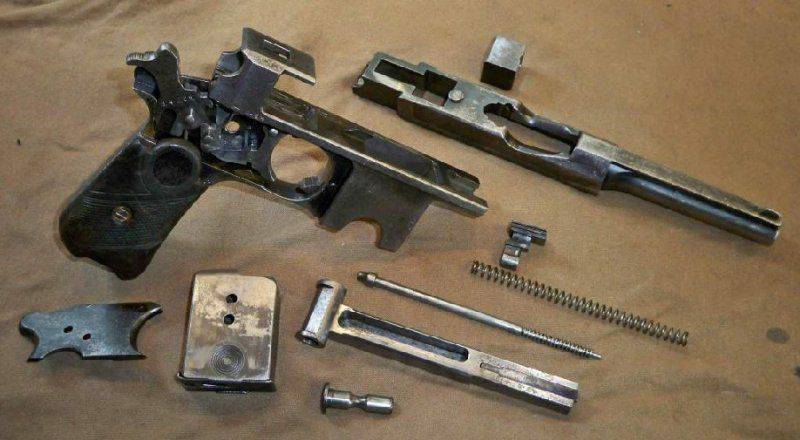 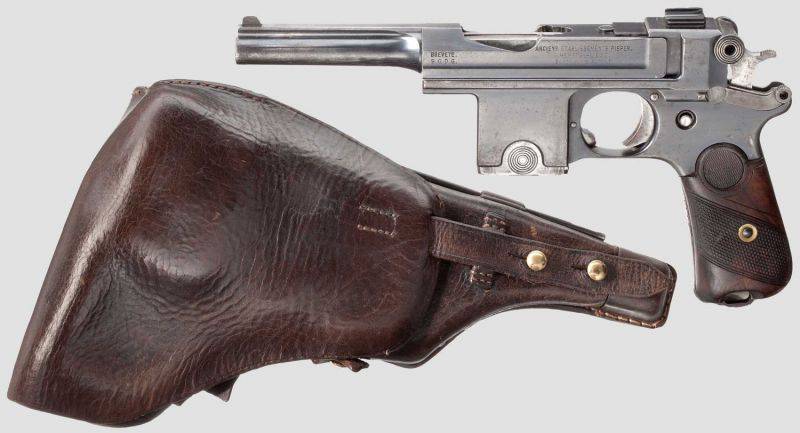 The pistols of Bergmann Bayard 1910 model of the year were supplied with a leather holster. In the lower part of the pistol grip there is an oval swivel for fastening the pistol strap. 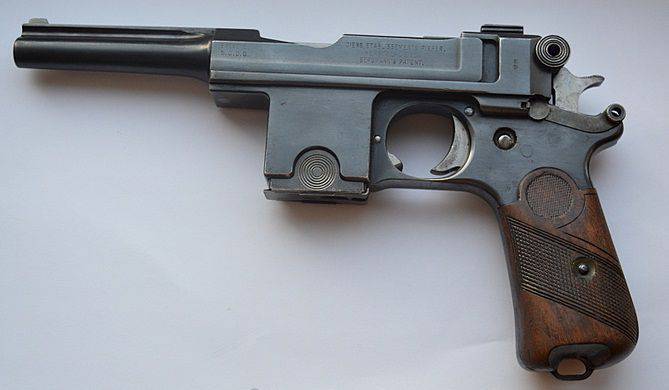 With the beginning of the First World War and the occupation of Belgium by Germany, the production of pistols did not stop. Anciens Etablissements Pieper produced pistols by Bergman Bayard for German needs. During this period, pistols with serial numbers from 15000 to 16000 without Danish receiving stamps were manufactured. Production in Belgium was completely stopped after the end of the war, only a small number of weapons with 17000 serial numbers were assembled from the remaining parts. 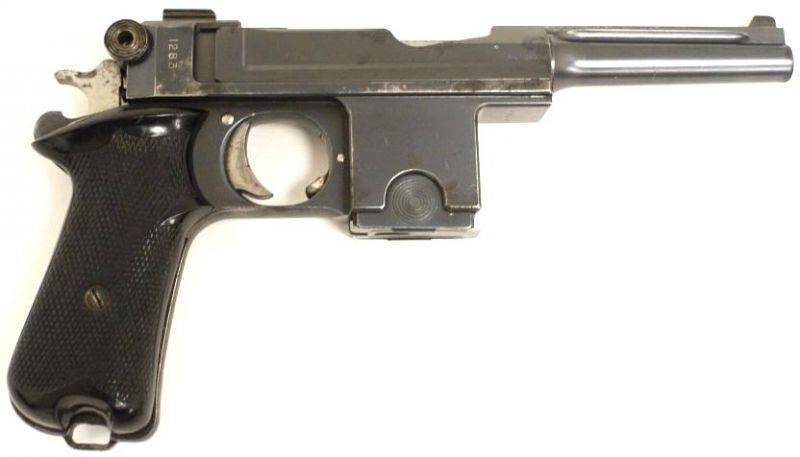 After the end of the First World War, Denmark needed new pistols and spare parts for their pistols by Bergmann Bayard M1910, but they could not get them from Anciens Etablissements Pieper. For this reason, the Danes decided to make weapons at home. 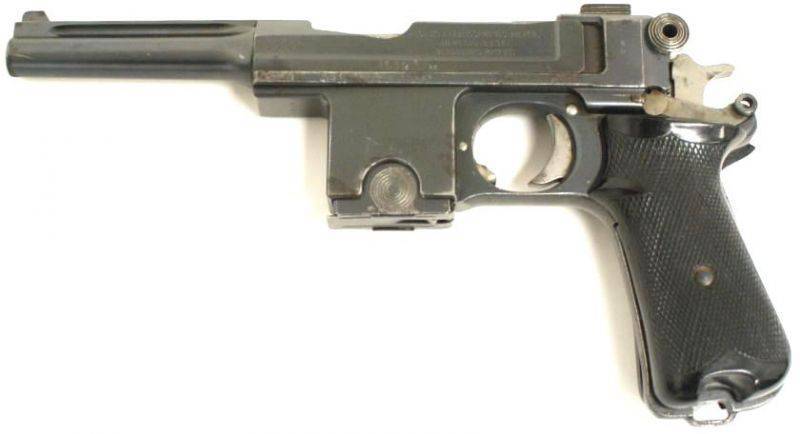 They made some changes to the design of the gun. Changes included an increase in the size of the magazine's latch, as well as the replacement of short wooden handles with high cheeks made of plastic. Due to the fact that the high cheeks of the handle closed the button on the left side of the frame, which served to open the right frame cover and access the details of the firing mechanism, it was decided to remove this button altogether.

Instead, the right frame cover was fastened with a simple screw, which was closed with the right cheek of the handle. The new pistol was named Bergmann Bayard M1910 / 21.

After upgrading, most existing pistols in Denmark were marked on the left side of the receiver in the form of an alphanumeric text “M 19 10 / 21”. 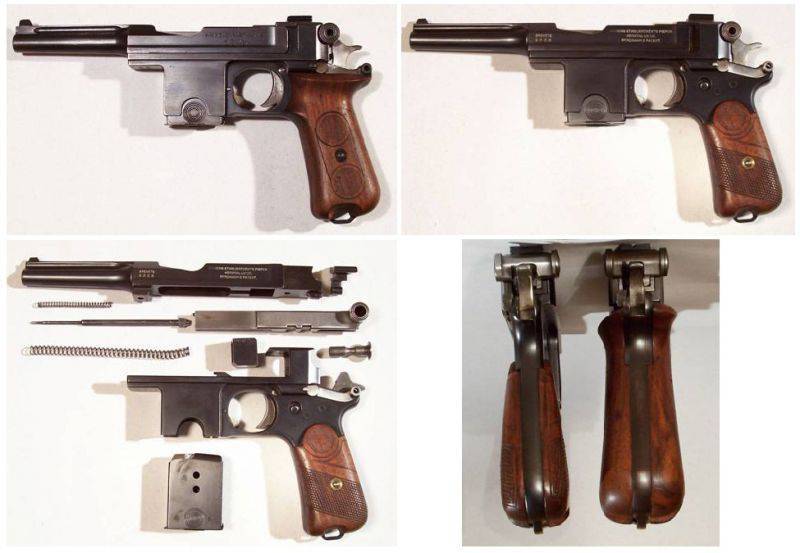 Plastic handles were subject to cracking and later the handle cheeks were made of wood. The wooden cheeks of the 1910 / 21 model's pistols differed from the cheeks of earlier-produced pistols in their height and thickness. 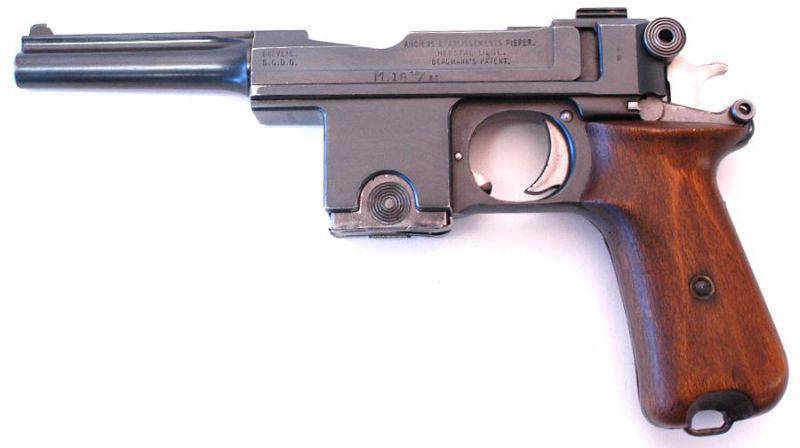 The cheeks of the handle could have a notch on the side surface, and be simple - smooth.

Pistols Bergmann Bayard M 1910 / 21, originally released in Belgium, had Belgian stamps that included the letter “B”.

But besides them on the weapon there were Danish reception stamps with the letter “D”. Together with the familiar marking "ANCIENS ETABLISSEMENTS PIEPER / HERSTAL-LIEGE / BERGMANN'S PATENT" and "BREVETE / SGDG", the characteristic marking "M 19 10 / 21" is applied to the left side of the receiver. 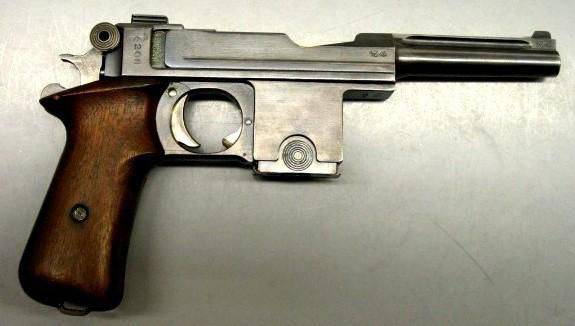 After Denmark began to produce fully self-made pistols, the marking on the details of the weapon was also changed. 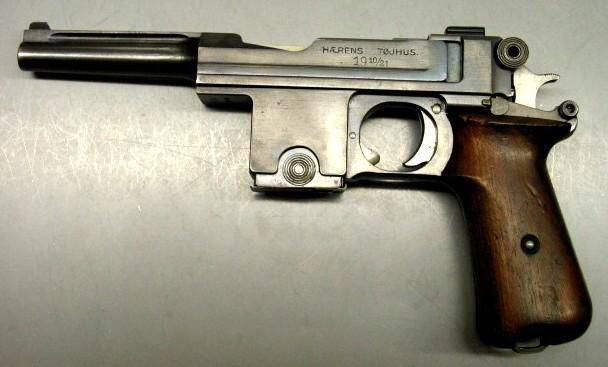 And the writing of the marking was very peculiar. In the first word, the second letter as if united two letters “A” and “E”, and in the second word the letter “O” seemed to be crossed out. Approximately 900 of such pistols were made in the period between 1922 and 1924 year. 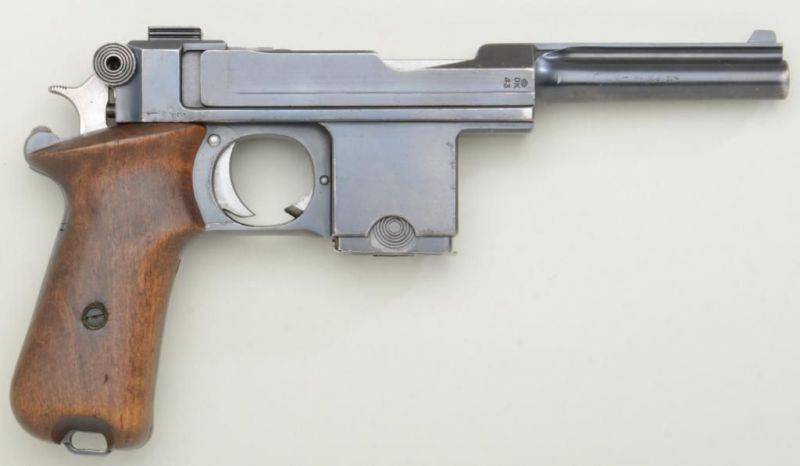 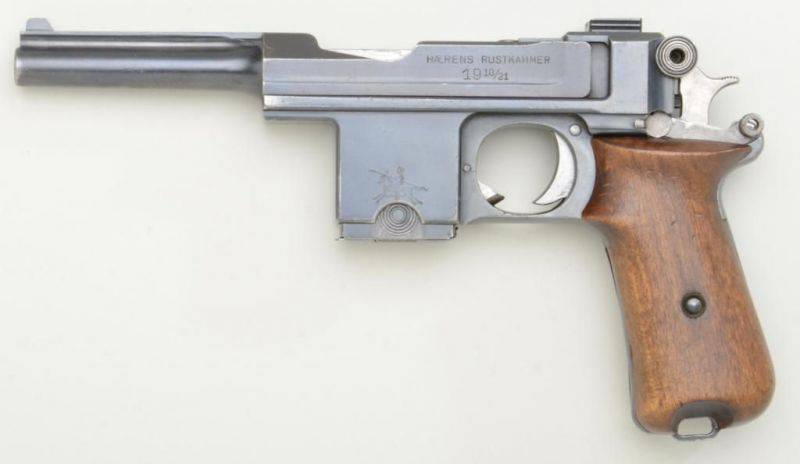 The serial numbers of these pistols were also double. The factory numbers began with the number 1, and the army continued the numbers of the Belgian pistols, i.e. from 4841 to 7045. 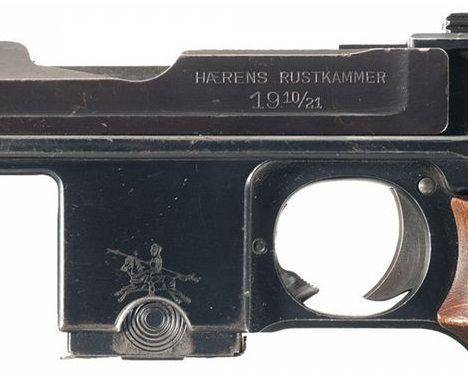 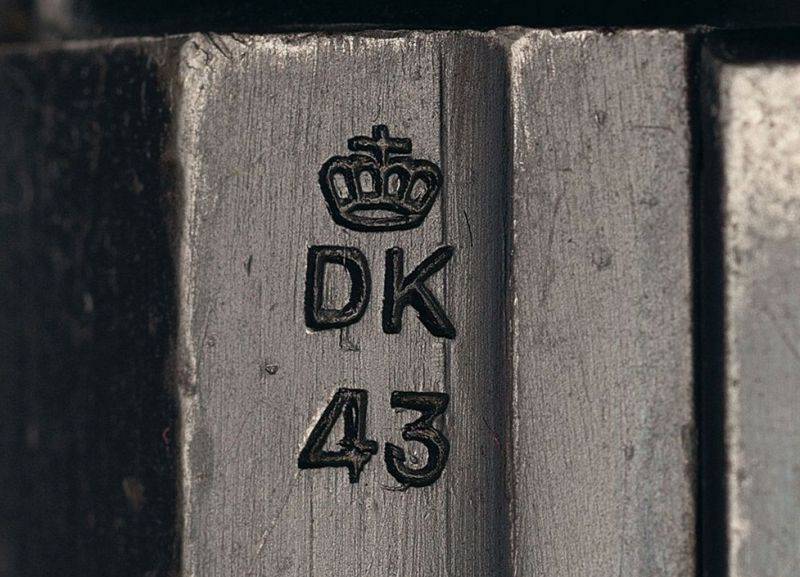 Pistols Bergmann Bayard Danish production have a characteristic stamp in the form of letters "DK" under the crown and a pair of numbers.

The holster for M 1910 / 21 pistols Bergmann Bayard was made of leather and had several compartments, probably for placing cartridges and auxiliary tools. 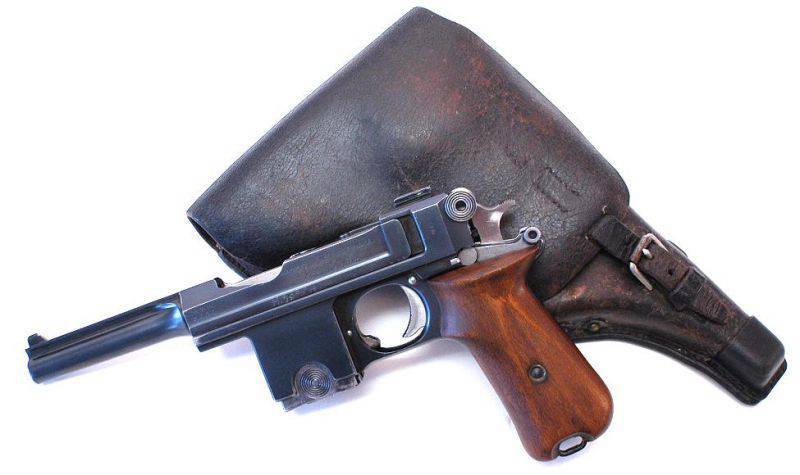 Pistol Bergmann Bayard is the last short-barreled weapon released with the surname Theodore Bergmann. Despite the fact that this version of the gun was quite successfully made in terms of ergonomics and tactical and technical characteristics, it could not gain the same popularity as the Browning or Mauser weapons. It is for this reason that the Bergmann Bayard pistol is considered a relatively rare pistol and is highly valued by collectors. On average, from 1500 to 3000 dollars are asked for similar weapons at gun auctions in Europe.

We are in Yandex Zen
Pistol Bergmann No.5 Model 1897 of the Year (Bergmann M1897 No.5)
Theodore Bergmann's Early Pistols: Bergmann Model 1893, Bergmann No. XXUMX
8 comments
Information
Dear reader, to leave comments on the publication, you must to register.