Syria has a chance to get out of war and chaos

October 21 2015
22
The last days are marked by the rushing of the American administration, which has not yet decided on how to maintain relations with Russia to resolve the Syrian crisis. On the one hand, the growing threat of terrorism poses a danger to the whole world, including the United States. On the other hand, Russia's initiative to suppress the combat capabilities of terrorist groups in Syria for the first time in many years lowered the United States to the level of an international participant, secondary in influence on the conflict. With this in Washington can not accept. 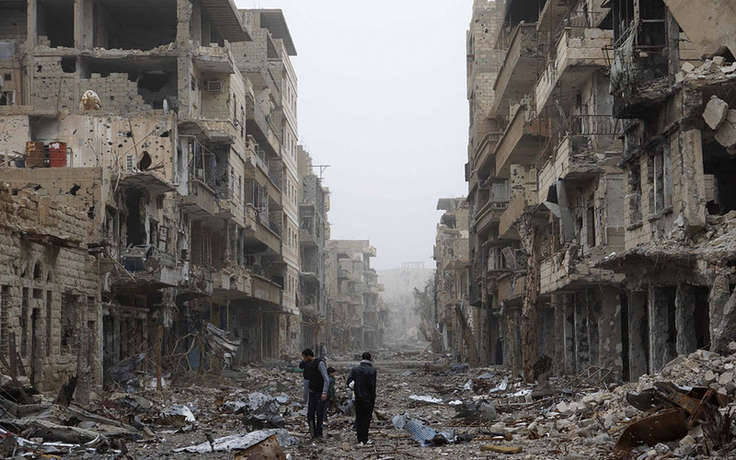 "Red Line" in front of the Western coalition

Experts note that the United States, as well as their allies, is not able to work out an answer for Moscow on Syria, in which the Western goals of changing the regime of Bashar al-Assad would remain unchanged. And the main thing is the preservation of the dominant role of the United States in resolving the Syrian conflict and in the fight against international terrorism.

Criticism of the actions of the American authorities began to sound in the United States itself. At the end of last week, for example, National Interest magazine publisher Dmitry Symes and executive director of the Washington Center for National Interest Paul Saunders published in the electronic version of the publication an article expressing clear dissatisfaction with the policy of the US administration on the Russian and Syrian tracks.

According to these authoritative American experts, President Barack Obama demonstrates his weakness in Syria to the Allies, and the lack of political flexibility in Moscow. The reason for such harsh assessments was the refusal of the American authorities to accept in Washington a Russian delegation led by Prime Minister Dmitry Medvedev. The authors of the article in National Interest called it "regrettable disregard for diplomacy."

The unwillingness to negotiate with Moscow and obsession with opposition to Vladimir Putin, according to these experts, deprives the United States of a chance to advance the US strategic goals in Syria.

As can be seen from this criticism, the discontent of the Americans is caused not by the fact that the Obama administration vaguely behaves in resolving the Syrian conflict, but that it misses the achievement of the strategic goals of the United States in the Middle East. Admittedly, these goals are quite different for the United States and Russia.

Recently, Vladimir Putin publicly defined the tasks of Russia in the Syrian conflict. In addition to the destruction of terrorist groups that pose a threat not only to Syria, but also to the world community, Russia's goal is to “stabilize the legitimate authority and create conditions for the search for political compromise.” “This is a healthy pragmatism,” explained the chief researcher at IMEMO, an orientalist George Mirsky, in an interview with Voice of America. - If Putin left Assad now, and ISIS captured Damascus, then the situation in Afghanistan would repeat the end of 80 - the beginning of 90 of the last century: then the Soviet army left, the Islamists broke into Kabul, for several years they killed each other, while the toughest The most radical of them, the Taliban, did not take power. So it would be here. ”

As American observers admit, the goals of the Western coalition are diametrically opposed to those of Russia - to bring the so-called moderate opposition to power in Syria. This was directly stated by the President of the United States in response to the above-mentioned statement by Vladimir Putin. Barack Obama noted that Russia does not make a difference between the militants of the Islamic State terrorist organization and the “moderate Sunni opposition, which aims at giving al-Assad power back!”.

These forces are actively supplied with weapons. The most famous recent episode was when the American military dropped more than 50 tons of aircraft from parasails to the militants opposing the Syrian army in the north of the country. weapons and ammunition. The cargoes are intended for "Syrian groups, whose leaders have been duly approved by the US administration and who are fighting against ISIS," said the representative of the Western coalition, Colonel of the US Armed Forces, Steve Warren.

It is unlikely that this clarification should be taken seriously, given history of the conflict, when the weapons supplied by the Assad opposition were soon found among the IS militants. There are no examples of this. That only costs the delivery by the American authorities of thousands of Toyota pickups to the forces opposing Assad. Today, these machines with large-caliber machine guns mounted on them have completely passed over to the terrorists.

Now, with the appearance of the aircraft of the Russian Aerospace Forces in the conflict zone, the line has reached the man-portable air defense systems. “There is evidence that terrorists are attempting to acquire Western-style MANPADS in neighboring states in the region,” TASS quoted the words of Russia's deputy foreign minister for countering terrorism, Oleg Syromolotov. The high-ranking diplomat stressed that “the delivery of MANPADS to any of the terrorist groups in Syria would mean that the country that did this, in fact, sided with the“ terrorist international ”and would be viewed as direct complicity with all the ensuing consequences.

So the Russian Foreign Ministry has designated the “red line”, having crossed that, the states supporting the terrorists can receive, for example, a “gift” from the Caspian military flotilla or from somewhere else.

Syrian economy prepares for the world

Despite the sharp strengthening of the positions of Syrian government forces (as Western observers write, “there was an increase in at least one Kremlin”), international experts believe that the conflict cannot be resolved soon. The contradictions of groupings and spilled blood are not the best basis for excessive optimism. Meanwhile, people who are tired of war sincerely hope that the help that came from Russia will bring an end to civil confrontation.

Recently, talking about the restoration of the destroyed economy of Syria. According to the International Monetary Fund estimates for October 2015, compared with the pre-crisis period, it was halved. The IMF estimates only direct damage to 200 billion US dollars, and the number of refugees to 3,3 million people.

However, this is an incomplete picture. It gradually changes. Moreover, quite unexpectedly against the background of our usual telepictures with debris and destruction. For example, last year, despite active hostilities, Syria’s industry grew by a percent, while fixed investment amounted to more than 18 percent, and working capital of enterprises increased by almost 10 percent. Such data has recently been cited by the Russian economist and orientalist Said Gafurov.

These figures have caused the observers sincere surprise. It turns out that even during the war the Syrians continue to build. It is clear that we are mainly talking about the restoration work. For example, in the province of Damascus in the Saeed Zeinab area, four hotels, designed for 1300 tourists, were recently renovated. In the area of ​​Kuteif restored tourist complex. Perhaps over time, they will be in demand for external and domestic tourism, which Syria previously earned good money. Today, hotel facilities are used to accommodate refugees from war-torn areas.

Not lost and management structure. According to eyewitnesses, there is a bus service between the cities controlled by the Syrian government and the Islamists. Officials working in the territories occupied by the Islamic State terrorist group receive a salary from the government of Bashar al-Assad. They say that the Syrian president is striving to preserve the unity of the country. Moreover, because of the lack of their own personnel, the Islamists in the occupied cities are forced to rely on local employees. Some use it, receive money from both Damascus and Raqqa (the capital of the IG), which, however, does not change the essence of the picture.

To demonstrate the degree of government control over the country, Said Gafurov gives the following figures: from the 65 branches of the People's Credit Bank, which focuses on private lending, 48 is currently operating. According to Western data, a good borrower at the end of 2014, could get a credit line at 17% per annum.

Such measures support business. This summer, even in the capital of neighboring Lebanon, an industrial exhibition, Syria Fashion, was held. It was attended by 100 Syrian companies. They are not focused on exclusively Eastern fashion. Before the war, expensive brands placed production in Syria. These ties have largely collapsed, but the Syrian business began to rise. And not only in the textile sector. Once self-sufficient in the main types of agricultural products, for example, wheat, which was even exported, Syria is now restoring production in the agricultural sector. Capital newspapers are full of reports about the supply of grain to elevators in various provinces of the country. The bill went there for hundreds of thousands of tons.

Foreign investors, of course, are interested in the country's oil and gas industry. Our Stroytransgaz, a company from China, South Africa, and Venezuela is active here. All plans are serious. In the industrial sector, Belarusians are interested in moving their MAZ vehicles to Syria. Since the summer, negotiations are underway to organize the assembly of Minsk trucks at a local enterprise. They promise to use for this open credit line.

These examples should not be misleading about the absence of serious problems in the Syrian economy. The war left its black mark on it: over 12 millions of Syrians live in need, during the conflict, the currency rate fell from 60 to 220 Syrian pounds for the US dollar, annual inflation exceeds 30 percent, purchasing power, domestic consumption and production dropped sharply.

At the same time, experts consider the ability to quickly recover and build up after wars as an important national trait of Syrians. In the history there is a lot of evidence of this. And the outcome of the current war for serious observers is already obvious: the rout of extremist and terrorist groups and national reconciliation. These estimates directly coincide with the tasks of Russia in the Syrian conflict, which Vladimir Putin frankly announced.

... And yet you should not take hats in hand to aim at the perpetrators of the Syrian conflict. Terrorists just do not lay down their weapons. They still buy thousands of people in their blood. As the representative of the Ministry of Defense of Russia Igor Konashenkov said on Friday: “In the provinces of Idlib and Hama, the field commanders of the terrorist organization Dzhebhat al-Nusra, under the penalty of being shot, families are forced to mobilize local residents. And in the province of Rakka, ISIL militants declared the total mobilization of the male population since 14 years. ” So the leaders of the terrorists are trying to compensate for the massive desertion of the militants. And along with this, the price that the Syrian Arab Republic will now pay for the long-awaited peace and political stability is increasing.

We are in Yandex Zen
Syria: "Friends" met again
Syria: Americans scare themselves, and Asma Asad buys chairs
22 comments
Information
Dear reader, to leave comments on the publication, you must to register.