Notes Ukrainian nationalists from the Crimea, (translated from the language)

October 20 2015
200
A small introduction. I went to censor.net (sometimes I visit this “cesspool”), and suddenly I find this creation. How it was published, how it was watched by the moderators of this "resource" - I do not understand. But I think it will soon be "fixed." 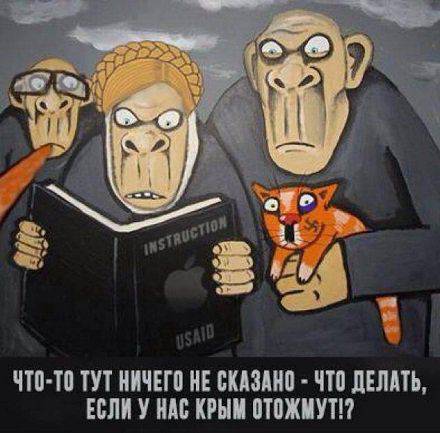 These notes with risk to life were taken out from the territory of the occupied Crimea. Despite the occupation, resistance fires in the Crimea. Reading these notes, it is impossible to refrain from tears ...

Today the blockade began. Learning in the market this newsI flew home like on wings. I ran home and shouted: “Ukraine has blocked the Crimea! Soon we will have nothing to eat !!! ”Mother sat down on a chair and wept. Father got up, looked at the portrait of our president hanging on the wall and said: “I believed! I knew! Motherland did not forget us !!! ”Grandpa lying on the couch whispered:“ They've waited ”- a small tear in his glass cheek. Andreyka whined: “And sho, yogurts will not be now ?!”, - but the father gave him a slap and he fell silent.

I went shopping. There is no bread, there is no milk, the last cereal is bought. I met my girlfriend, we hugged her and wept with happiness. Are we really going to starve soon? Hurry! The folder climbed onto the roof and secured the yellow-blakytny prapor on the roof.

For lunch, each mother gave two spoons of soup and a spoonful of barley porridge. She said that products should be saved. I could not resist and asked if we really had nothing left to eat? Mom said: “Yes, docha”, - tears flashed in her eyes. These were tears of happiness. At night, I snuck into the pantry, pulled out a bag of cereal and drowned it in the toilet. We must help the motherland!

I had the first hungry faint. I just could not believe my happiness. For lunch, everyone got a potato and a piece of bacon the size of a matchbox. Andreyka whined: "I want to eat!" Mom sang to him three times "Schenya Ukraine is dead!"

My father and I, with other true patriots of Ukraine, went to the border. In our hands, we carried a folder with a poster “Thank you, Ukraine, for the blockade!”, Which was painted all night. We shouted across the border to our valiant blockaders: “That's right, lads! Do not remove the blockade! We will soon have absolutely nothing to eat! Keep it up! Glory to heroes!"

My father found Andreika's chocolate wrapper. The chocolate was given to him by the occupiers, the Muscovites. And he took it. My God, what a shame. Father whipped a traitor.

For lunch, everyone got a mug of hot water. There is nothing in the shops. In the market there was one dill. The blockade is valid! In the evening, grandpa asked everyone to gather in his room and asked to open his chest. There we found the uniform of the cornet of the UPA, the battle flag and the German machine gun. "Swear that you bury me in this uniform, with a gun, covered with a flag," the grandfather ordered. We all swore.

At lunch knocked at the gate. I opened. There were two buryat armed to the teeth, each holding a package in his hand. "Hello, we brought you food, and the neighbors say you do not go to the store or go to the bazaar." Loaves of white bread and sausage were peeking out of the bags. I looked at the invaders with hatred: "We do not need anything, we have everything." Without hearing the answer, they pushed me away, walked through the courtyard, went into the kitchen, where my mother was cooking dinner - pouring tea into cups. The elder put a bag of buckwheat on the table, two cans of “Tourist's Breakfast” and ordered the mother: “Cook porridge, but not that ... suitcase-ferry-Buryatia!”

Only when the mother put the cast-iron on the table with the ready-filled stewed porridge mongolokazapa left. Finally, the elder warned: “We will come tomorrow. And do not even think of opening the gate for us, otherwise we have a master key, ”and patted the grenade launcher on his shoulder.

We all gathered at the table. “It’s impossible to eat, it’s moskalskaya porridge, you have to throw it out,” grandfather mumbled. “You can’t throw them away,” my father objected, “Putin has spies everywhere, snitches, they will report.” We were all silent. “Eat,” the father broke the silence, “eat, I will take this sin upon myself.” We all cried and ate. No, not everyone was crying, the wretch Andrejka did not cry, but he ate with pleasure, already chomping. Grandfather had to feed by force.

Rising from the table, I rushed into the courtyard and put two fingers in my mouth, trying to induce vomiting. But damned stomach did not want to part with the eaten buckwheat. Did he sell to the Muscovites too? Exhausted, I went to my room and fell on the bed. Father entered quietly. I turned away not to see him. He sat down on the edge of the bed. "How could you, Dad?", - only I managed to squeeze myself out. "Forgive me, daughter, if you can," - the father stood up and, shuffling, left the room.

Today was a scary day. In the morning I went to the city. Two cars stood in front of the store, Russian occupants with laughter and jokes unloaded boxes and brought them to the store. They were helped by traitors from the local. With a heavy heart, I came home and found a strange picture in the yard.

Andrejka was standing with her back to the fence, and in front of him was her father. “What happened?” - “He went to the invaders, he ate with them,” said the father gravely. I looked down and saw chocolates trampled into the ground, a plastic bottle crushed by my father's boot. "Russian kvass" was printed on the label. Father was breathing heavily. “Nenka-Ukraine is trying for us, made us a blockade, but he ... Wait and do not move. I gave birth to you, I will kill you. Daughter, bring grandfathers Schmeisser ".

"And here you are!", - the bastard showed the folder fig and a monkey climbed over the fence. The father jumped out of the gate: “Come back home in the evening - I will kill you!” “But I will not come back! - came from the opposite end of the street, - I'll go to the soldiers! They promised me to take the son of the regiment! I will grow up and also in the Russian army will serve I will go, under the contract! Putin rules, Bandera is a goat! ”Papa clutched at his heart.

My mother and I ran up, grabbed him by the arms and led him into the house. “I said, do not let him watch Russian Winnie the Pooh cartoons! They raised Moskal on their heads. ” We hardly sat him on the stool.

"Dad ..." I began. “Don't,” my father stopped me, “we all know. The blockade did not work. Klyati Muscovites have almost built a bridge across the Kerch Strait. ” He looked up at the portrait of our president and broke into a scream. “How could you let this happen ?! How allowed ?! We believed you so, jumped like this, and you! Why ... ", - the folder coughed, lowered the head and began to cry. A terrible day.

In the morning, Pronya Prokopovna came to us. The father at this time at the gunpoint of the invader's automatic was eating Russian borscht. (Yesterday, these savages fed him Siberian dumplings.) “And I just saw your Andreika,” said Aunt Pronya. - With soldiers in a military car rides. He is like their own. He says he was identified in the music team, he is already being sewn ”... Papa bit off half a spoon.

When the soup was eaten and the occupant left, the father stood up, walked over to the president’s portrait hanging on the wall, said “pastry chef, b…” and removed the portrait from the wall. Then he came out and returned with the flag of Ukraine removed from the roof. “From now on, everybody even speaks Russian at home. Embroidery to throw out. To hide my grandfather and not show it to anyone, otherwise this old fool will not do anything else, Father turned to me: - buy a portrait of Putin and a Russian tricolor in the store. And tomorrow we all go to get Russian passports together. ”

In my opinion, he decided to go to the illegal position ...

The fight goes on!

We are in Yandex Zen
About Stalin and Khrushchev
What you didn't want to know about England
200 comments
Information
Dear reader, to leave comments on the publication, you must to register.