The most ancient ship on earth

November 4 2015
21
What ships were in ancient Troy? Question - interested many so many visitors of HE. And what did the ships of that era look like? After all, it is obvious that the famous Greek triremes, known to us from black and redakak Greek ceramics, have nothing to do with the Greek Trojan period stories Dont Have! Murals from Fera? But they belong to an earlier time ... However, there is a place in the Mediterranean, where there are just a lot of ancient ships, and there are a lot of different centuries. This is his seabed! Another thing is that finding them is not so easy. Some vessels immediately, barely they sank, broke in waves. Others are covered with sand and are not visible from above. Others may be intact, but they lie very deeply. So you need a rare luck and coincidence, so that the divers, first, would stumble upon such a ship, and secondly - there would be something to get! This also matters. After all, then it can be restored and put in the museum. 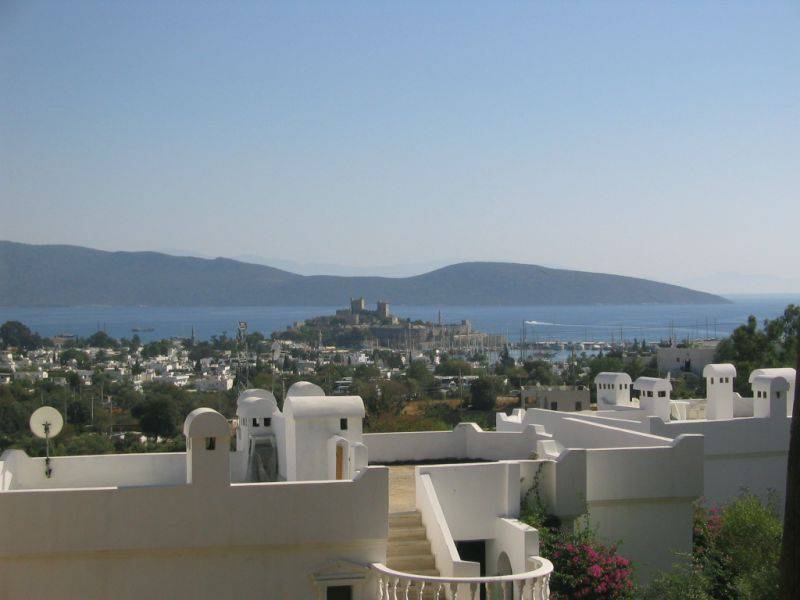 Castle of sv. Petra in Bodrum. View from the shore.

Here in the pages of the BO I have already told about the replica of the ship from Kyrenia, which is located in the Museum of the Sea in Ayia Napa, while its remains are in the Museum of the Ship in Northern Cyprus. However, this is not the oldest Mediterranean ship today! The oldest one is located on the mainland, namely in the Turkish city of Bodrum, which is located on the south-west coast of Asia Minor between the resorts of Marmaris and Izmir. It is said that Bodrum is the capital of Turkey’s “Cote d'Azur” and this is true, but this is not the case now. 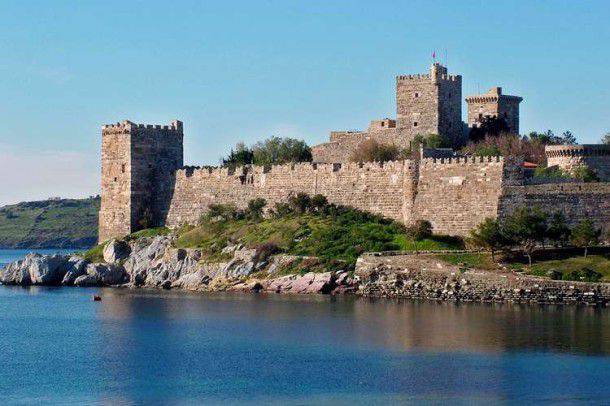 Castle of sv. Petra in Bodrum. View from the sea.

For us it is much more important and interesting that it was in its place in antiquity that same city Gelikarnas was located, which became famous for the whole Oikumena by the majestic tomb of the king Mavsol, which for the first time received the name of the Mausoleum. In ancient times, the Mausoleum was considered one of the seven wonders of the world, but it was completely destroyed, and only a few stone blocks from its walls were used in the construction of the castle walls of the Crusaders. And then they still found the preserved foundation of the Mausoleum, and miraculously survived statues and reliefs. In the middle of the 19 century, all of this was taken to England in the British Museum. Although a piece of the city wall of Helikarnas is still partially preserved, several towers and the legendary gate of Mindos. 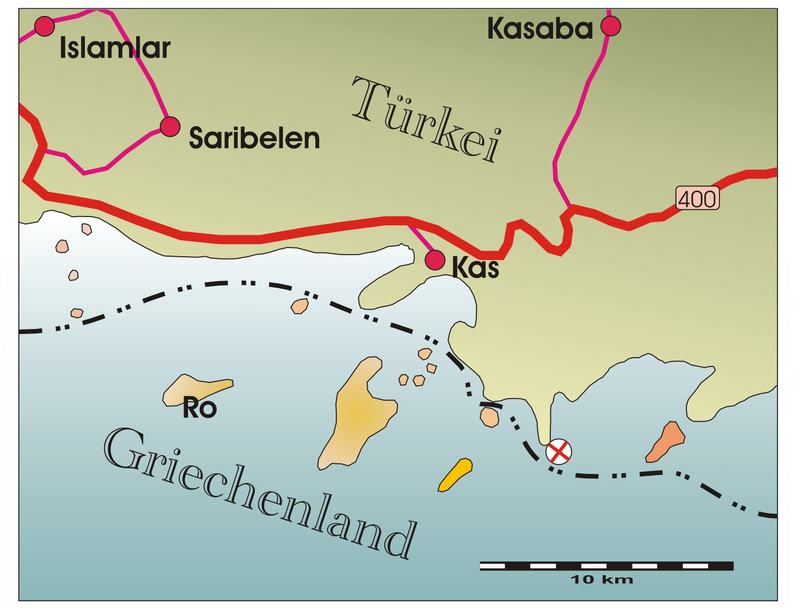 Map of the location of the ship from Kash.

But on the cape Zephyrion, prominent in the sea, at the beginning of the 15 century, the knights of the Order of the Hospitallers built themselves a castle, which they called the castle of St. Peter. And here in it, after all the historical tragedies in 1973, the museum of underwater archeology was located, and if you find yourself somewhere nearby, you should definitely visit it! 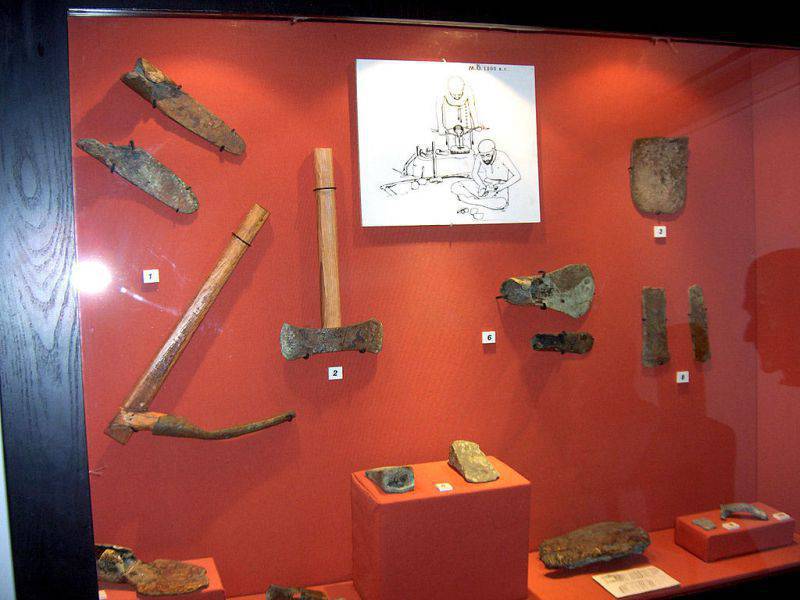 Tools found on board.

What is there just not, starting with the finds related to 14 c. BC: this and weapon, and coins, and vessels from the Byzantine ship of the Middle Ages. In the hall of the Carian Princess Ada, you can admire her tomb and gold jewelry. This is where the world's richest collection of ancient Mediterranean amphorae, the forerunners of modern maritime containers and cisterns, is kept. But the main highlight of the museum is the reconstruction of the Ulu-Burunsky ship, which sank here near the city of Kas at the end of 14. BC. Interestingly, even though this ship is small in size, it was lifted out of the water for as many 10 years! 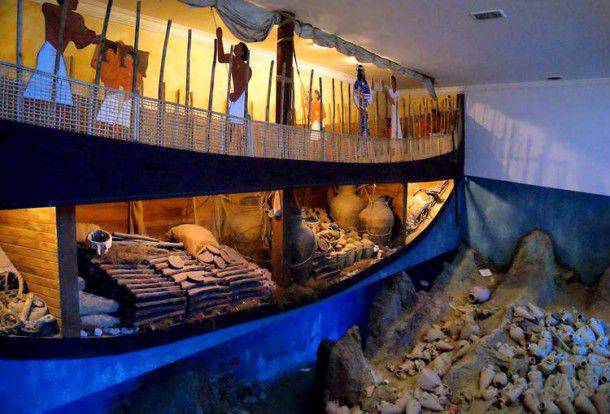 The ship in the cut.

The life-size model of the ship can be viewed in detail, starting with the hull made of cedar planks, heavy stone anchors and wreckage of oars. It historians have found a lot of treasure in the truest sense of the word. For example, it is a golden scarab with the name of Queen Nefertiti, a stone ax, obviously of a ritual purpose, four swords of different shapes and even ostrich eggs!

Exhibits from the ancient ship and its reconstruction are located in the Uluburun hall, so named after the rocky cape on the southern shore in the area of ​​the city of Kas. Here, this ship with all its cargo several thousand years ago crashed and sank, and all the wealth on board went to the bottom of the sea. For many years he calmly lay at a depth of about 60 m, until he was discovered by chance ... 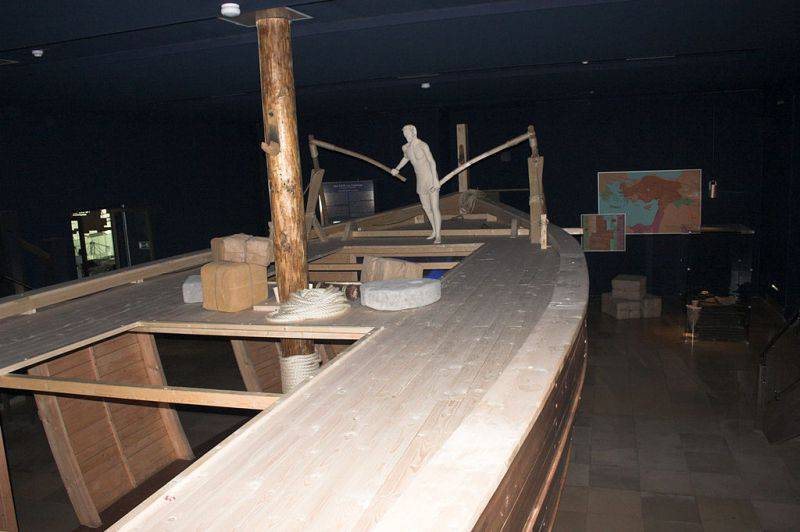 It was the case that in 1983, a local diver who hunted sea sponges and knew the seabed found an unusual cluster of strange ingots and remains of a wooden ship. He picked up several samples from the bottom and carried them to the museum, where it immediately became clear that these ingots in the form of sheep's skin were made of copper and that they belong to the late Bronze Age, and this ship itself to the 14 century BC. 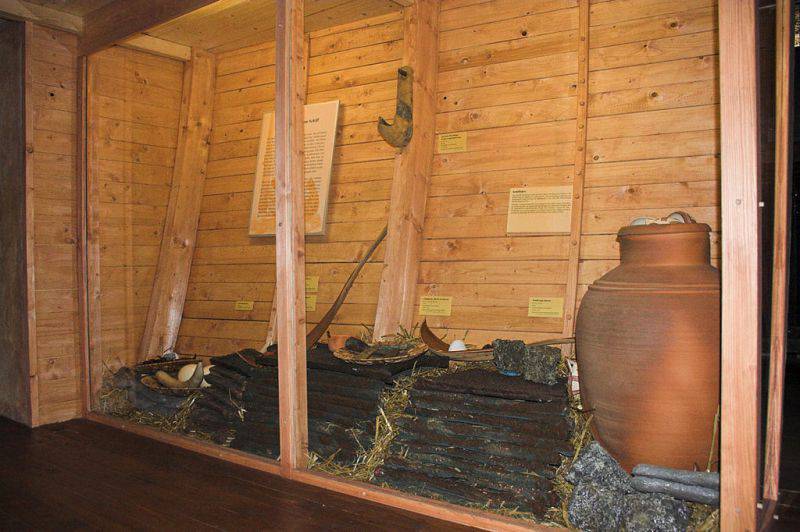 The discovery immediately aroused extraordinary interest not only among specialists in underwater archeology, but also ordinary citizens who read about this event in the prestigious magazine “National Geographic”. It is clear that the Bodrum Museum of Underwater Archeology then also attracted the attention of the public, and the number of visitors from different countries in it immediately increased several times. (Here it is an obvious and obvious "conspiracy theory": it was all done specifically to deceive the gullible readers of this magazine and increase the museum's income!) However, the incomes were incomes, and they clearly did not hurry with the work of raising the ship. It was carried out in whole 11 stages, each month for 3-4, and went from 1984 to 1994 year.

It was possible to find out that the ship was small in size: the length of the entire 15 meters, but carrying a cargo weighing about 20 tons. His body was quite damaged, although some of its parts were preserved very well. It turned out that it was made of cedar planks, which were jointly joined together between each other — that is, on pegs inside wedged, inserted into holes drilled in the planks. Remains of oars were found, the largest of which was 1,7 m long and 7 cm thick. The ship also found whole 24 stone anchors weighing from 120 to 210 kg and two small anchors weighing 16-21 kg. It is possible that such a large number of anchors appeared on the ship not by chance. It is possible that they were used not for their intended purpose, but for ballasting the vessel, although this is nothing more than an assumption. 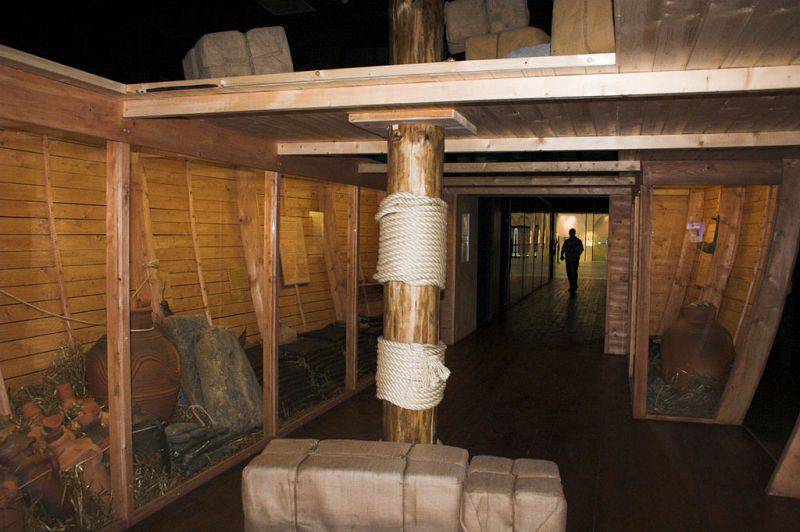 The ship in the section: Come and see.

Findings from the ship allowed to determine that this ship was a merchant ship from the Middle East, and most likely from Cyprus, and by the time of the disaster it can be attributed to the 14 century BC, that is, it was the oldest sea ship in the world.

Egyptian scarabs found at the bottom. White and large (top) double-sided enlarged plaster copies. This is a concern for visitors!

This discovery was of great importance because it automatically shifted the history of maritime international trade to the Bronze Age, since the cargo found on the ship: ivory, amphorae, small ceramics, household utensils, 10 tons of copper and tin ingots, fine glassware and jewels from gold - it all came from Egypt. The ship, apparently, sailed to the shores of Syria and Cyprus, and perhaps the final destination of his journey was the shores of the Black Sea. It is believed that the cargo could be taken to Egypt, but it is impossible to determine exactly where this ship was sailing. 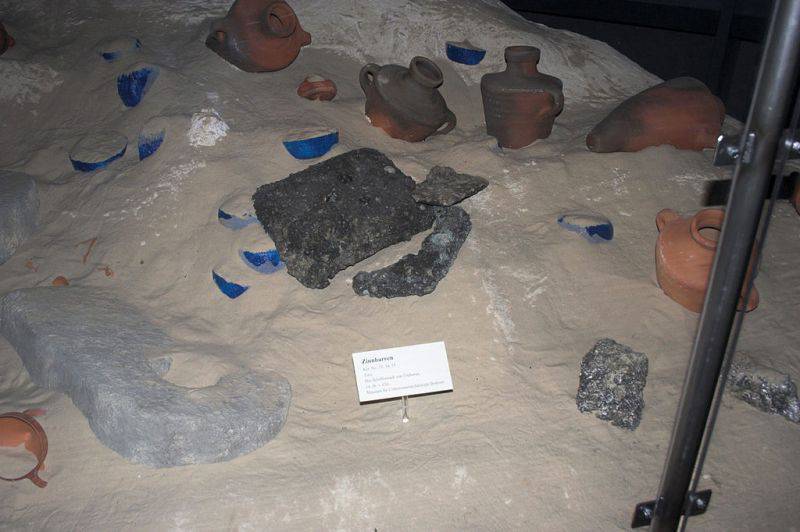 A piece of sea bottom, preserved in a museum. 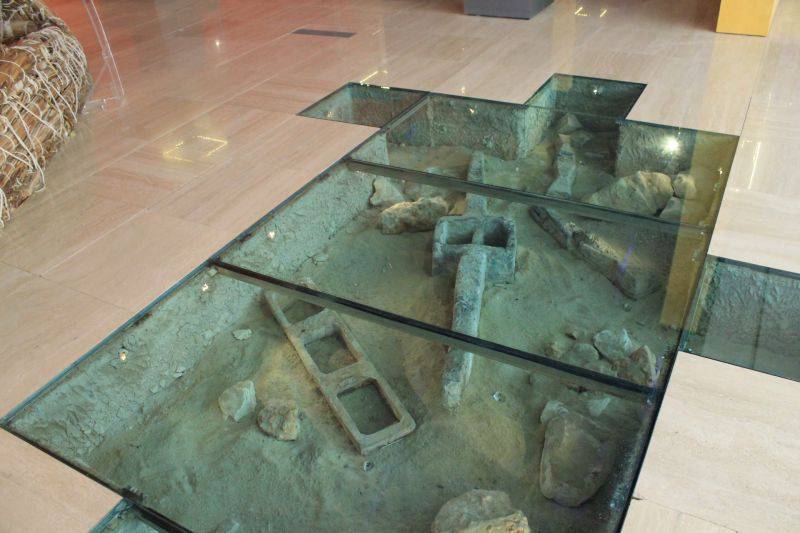 Another bottom piece with anchor rods lying on it. Museum of the Sea in Ayia Napa. Island of cyprus

Interestingly, in the Bodrum Museum not only the details of this 15-meter ship from the seabed are exhibited and its replica exhibited, but also shows how its cargo could be placed in the hold. There are also exhibits here, and valuables from other ships that have survived much worse, but they still gave something to science, including from Cape Gelidonia, and from other places of this coast. 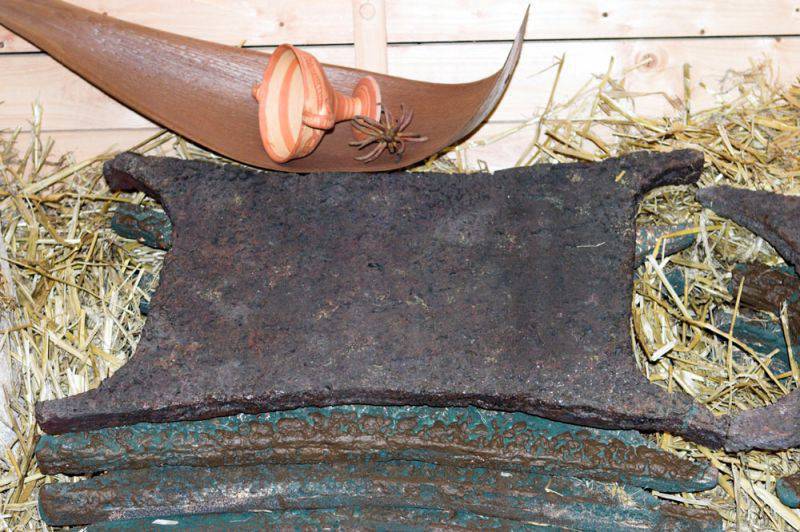 Copper ingots in the form of skins.

Dendrochronological studies of the wooden parts of the vessel were carried out by Dr. Kemal Pulak of the University of Texas, and they showed an approximate date of its construction - about 1400 BC. er It turns out that it is 150 years older than the same conventional date of the fall of Troy. But this also unequivocally suggests that already at that time established Mediterranean trade existed.

Blue glass is the raw material for remelting.

Professor Peter Kuniholm from Cornell University conducted a study of the wooden parts of the ship's cargo. Their results suggest that the ship could have sunk around 1316 - 1305. BC. er This dating is confirmed by ceramics found on board. Such archaeologists find in the layers of "eclipse Mursili" 1312 year BC. e., named after the Hittite king Mursili II. 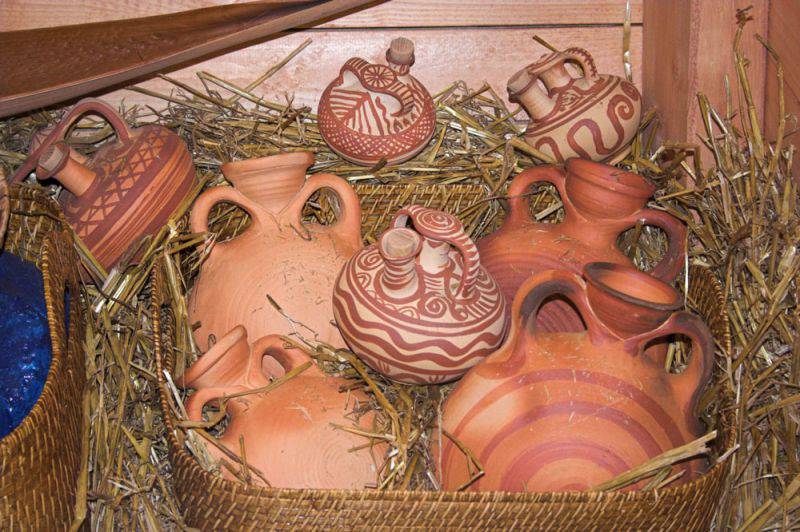 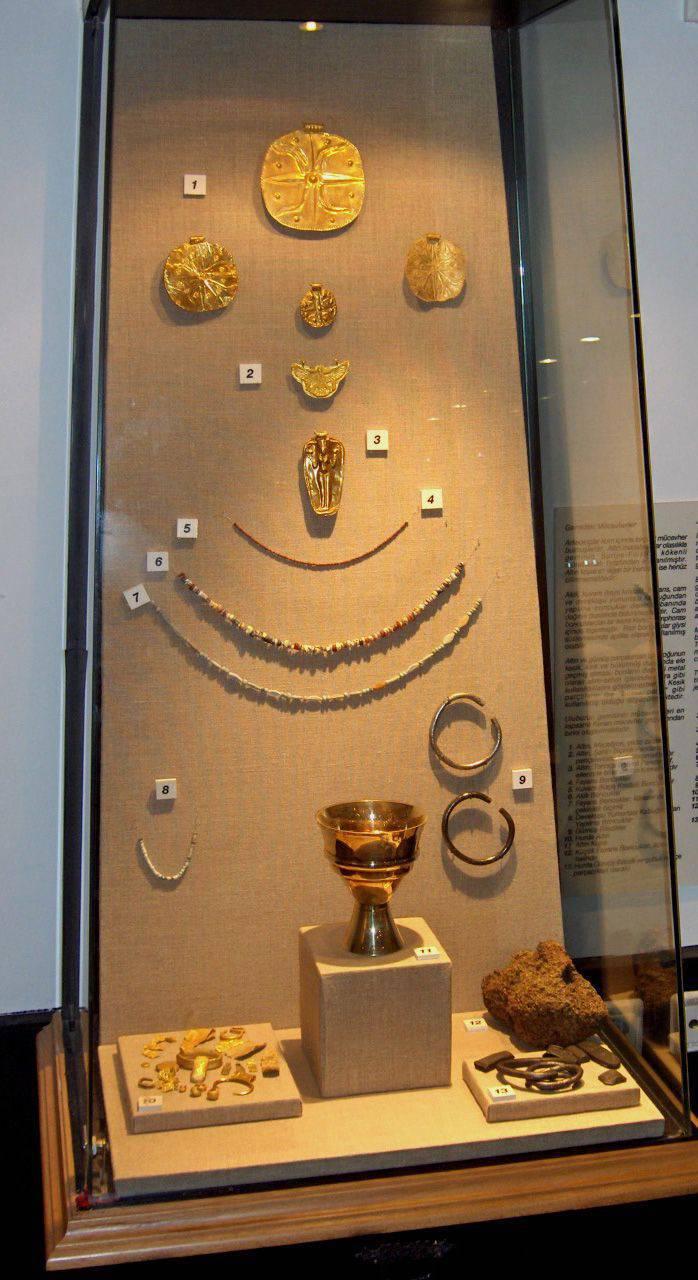 Just got from the bottom about 18 000 items. Of these, 354 ingot copper 10 tons weighing, 40 ingots of tin weighing about one ton, 175 ingots of glass. Found petrified food, as well as in the vessels of Tutankhamun’s tomb: acorns, almonds, olives, pomegranates, dates. The jewels found a gold ring with the name of Queen Nefertiti, as well as a whole range of gold pendants of different shapes, agate beads, faience beads, silver bracelets, a gold bowl, tiny faience beads, fused into one, gold and silver scrap.

The stone ax is clearly a cult destination of a very interesting shape.

Ctrl Enter
Noticed oshЫbku Highlight text and press. Ctrl + Enter
We are
The castle of Saint Florentine: "the castle that was never besieged, and in which they live"Conwy Castle - the royal castle of the "iron ring" of Edward I.
21 comment
Information
Dear reader, to leave comments on the publication, you must to register.