The Trojan War and the "peoples of the sea." “English historians report ...” (part nine)

October 23 2015
146
The interest shown by VO readers to the topic of the Trojan War is very significant. Obviously, studying it in the fifth grade of a comprehensive school with very little children, they ... well, they don’t even bear much for themselves from the text of the poem in a prosaic retelling, let alone verses. Yes, and on the university bench ... Well, what do they say about those legendary events? I know that nothing particularly interesting. And about the Bronze Age itself, what is known? That everything was of bronze: and tools, and jewelry! And that's it! As a result, people who imagine themselves to be versed in at least something write the following: “these swords were mostly (after all,“ mostly ”added, well, how ... - V.O.) were for burial, because military use was difficult due to the fragility of swords, and the fragility of the lack of tin and arsenic content ... ". Alas, and tin at that time was, and arsenic bronzes (to tin) were not inferior to them in strength! 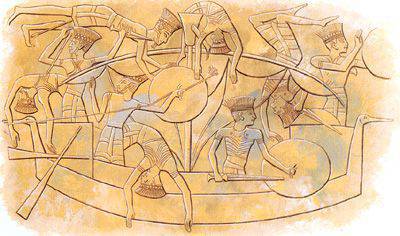 "Peoples of the Sea" during the sea battle with the Egyptians. Relief on the wall in the temple at Medinet Abu. Drawing

It is surprising that all these perplexities are easily resolved by self-education. In Soviet times, it was necessary to go to the library or wait a month for an ordered book in the IBA. Now a couple of buttons pressed and ... read! However, even then the books answering all these questions were, and they gave answers exhaustive. Here, for example, the book of E.N. Ferrous "Metal - man - time" (M .: Publishing House "Science", 1972 g.). Moreover, this man knew about what he was writing, not by hearsay, since he was in charge of the laboratory of spectral analysis of the Institute of Archeology of the Russian Academy of Sciences. The book is popular so that it is understandable even for the most mediocre mind, and his more serious monographs are called: “History the most ancient metallurgy of Eastern Europe "(1966) and" The most ancient metallurgy of the Urals and Volga region "(1970). And this is available to Russians today and they have not lost their meaning, although there are several new discoveries ... only confirming everything that he wrote then! 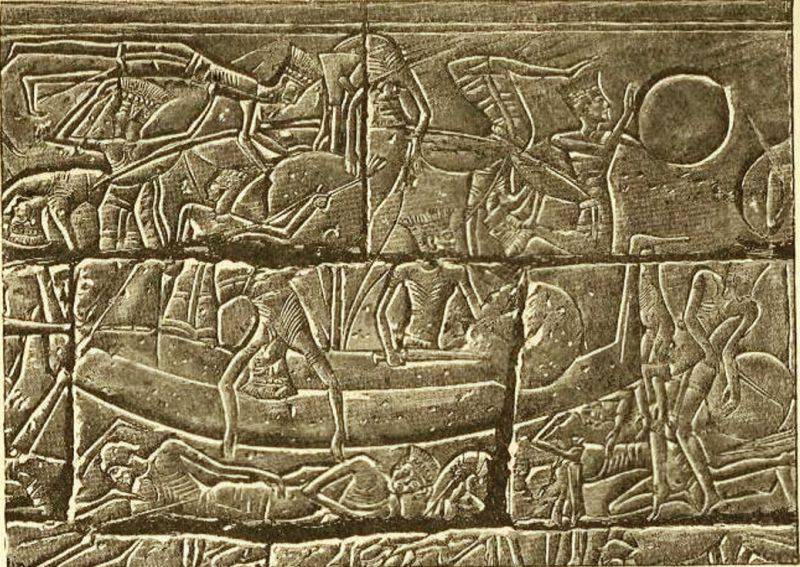 "Peoples of the Sea" during the sea battle with the Egyptians. Relief on the wall in the temple at Medinet Abu. Original.

At a later time, that is, already in our days, the excellent monograph by A.I. Soloviev, an employee of the Institute of Archeology and Ethnography of the Siberian Branch of the Russian Academy of Sciences, author of more than 50 scientific articles and eight monographs, “Weapon and armor. Siberian weapons: from the Stone Age to the Middle Ages "with drawings by the artist MA Lobyreva (Novosibirsk, publishing house INFOLIO-press, 2003).

Well, why is there no Russian studies of the same topic, but the Trojan War is obvious: we are poor and cannot afford to go where we should and, accordingly, study what we want. David Nicole, for example, suggested that I should somehow write about the Genoese fortresses in the Black Sea region. All I had to do was to drive them all and describe how they look now, and he would give their description in terms of retrospective, according to Western sources. Enough for me on Sudak and Kafu, and all. And then in different years, so what kind of book can we talk about? And in order to write a book about the Trojan War, one should visit Gissarlik, Mycenae, Athens, Crete, and Cyprus. 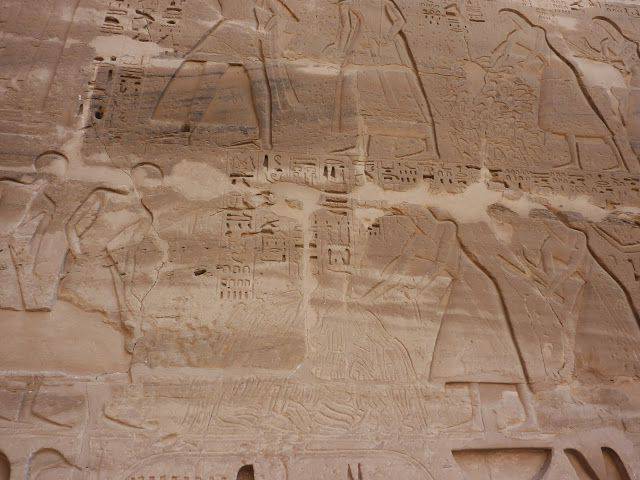 Cut off the penises of the enemies of Egypt. Relief on the wall in the temple at Medinet Abu.

I was in Cyprus, but when it comes to all other objects, I don’t even guess. And you need an artist to be always at hand and know how to draw, and did not dissuade with the fact that "I see this way." And I don't have such people in Penza! There is an art school, but there are no artists - I checked it! That is, the landscapes they write, but the buckles on the belts draw already than the belt itself, and how can you trust to paint the same “Osprey” ?! By the way, I proposed to write a book on this topic to one of our substantial publishers. And the editor replied that he personally would have read it with pleasure, but ... “the book will be expensive, the topic is narrow and who will buy such a book from us?” We have all the poor, and those who are rich in such books do not read! "That's it! Today the reader votes for the book ruble! 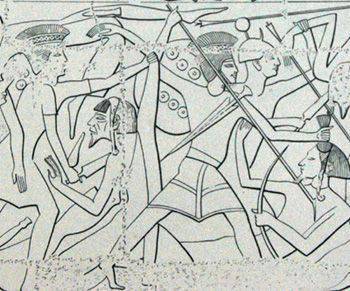 Another image from the ancient Egyptian relief. The sword hilt, characteristic for types C and CII, with the blade “horns” drawn back, draws attention.

Therefore, turning to the topic of the Trojan War and the "peoples of the sea", I will have to rely, first of all, on the work of such English-speaking historians as Raffaele D'Amato and Andrea Salimbeti. Moreover, Dr. Raffaele D'Amato is a famous Turin historian who collaborated with the University of Athens and received his second doctoral degree in Roman military archeology. He currently works as a deputy head of the laboratory of the Danube Provinces at the University of Ferrara. Well, Andrea Salimbeti has long been engaged in precisely the Trojan War. The illustrator of their books, Giuseppe Rava, who, as required by the rules of the Osprey Publishers, presented a detailed description of the sources from which this or that detail was taken, plus a photo of each such detail! 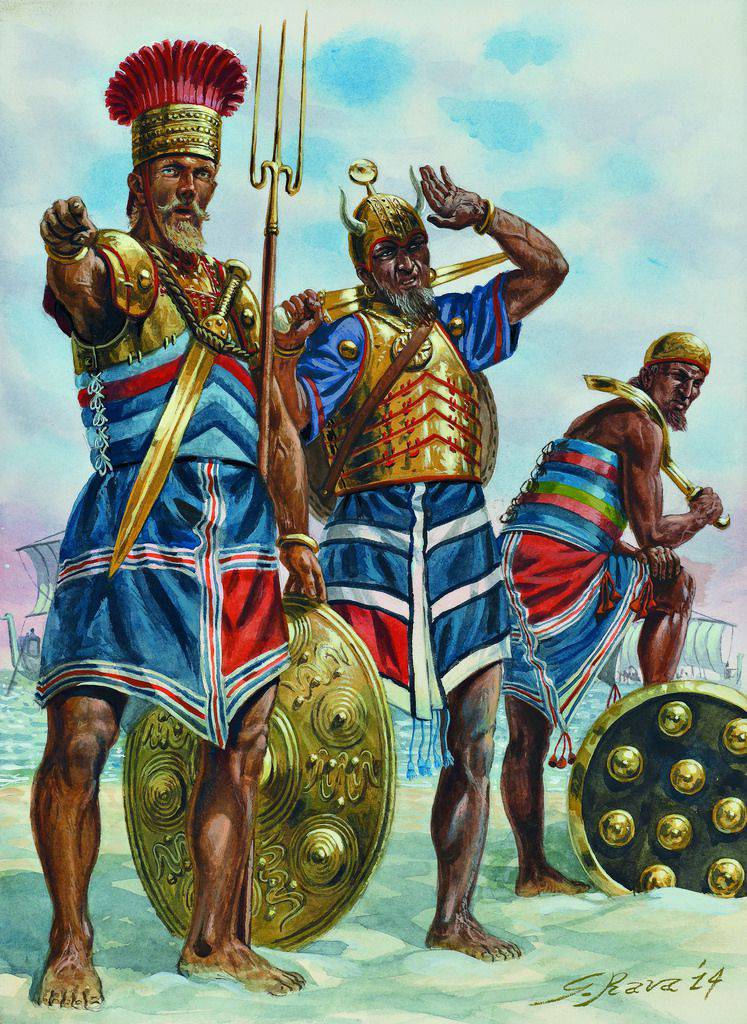 And this is how the appearance of the warriors of the “sea nations” imagines Giuseppe Rava. As you can see, every little thing is tied to their images on the wall in the temple in Medinet-Abu. Well, khopesh in the hands of a warrior could well have been a trophy. 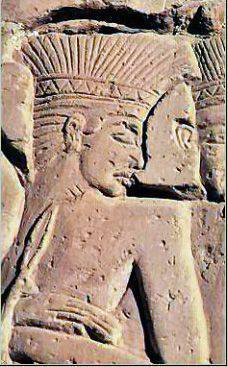 The same goes for their hats. Original.

Well, now let us turn to what is known today more or less accurately. So: “the peoples of the sea” is a whole group of Mediterranean peoples, which as a result of the “Bronze Age catastrophe” (eruption of the Santorini volcano, drought, etc.), in the XIII century BC. e., approached the borders of the Egyptian New Kingdom and the Hittite state from the Aegean Sea (Balkans and Asia Minor). Their names are known: sherdan, thirsena, tursha, Philistines and chakkal, danunas, Phrygians, shakalesha, Akayvasha (Achaeans), Garamanty, bows, tevkra.

Hieroglyphic inscription denoting "the peoples of the sea"

That is, it was so that a huge mass of tribes, including peoples who spoke different dialects of the Greek language (Dorian and West Greek dialects close to Dorian), as well as people of non-Greek origin, who lived in the same places, left their long-occupied places and moved south . There were rich areas in Central Greece and the Peloponnese, and the newcomers subjected them to destruction. The famous Pilos Palace was lost in the fires of the fires, and the place he stood for was forgotten for a long time. The citadels of Mycenae and Tiryns were not captured, but the economy of the Mycenaean states suffered irreparable damage. There was a rapid decline of crafts and trade just in areas most affected by the invasion ... Thus, at the turn of the XIII - XII centuries BC, the ancient civilization of the Mycenaean Greece suffered a terrible blow from which it had not recovered. 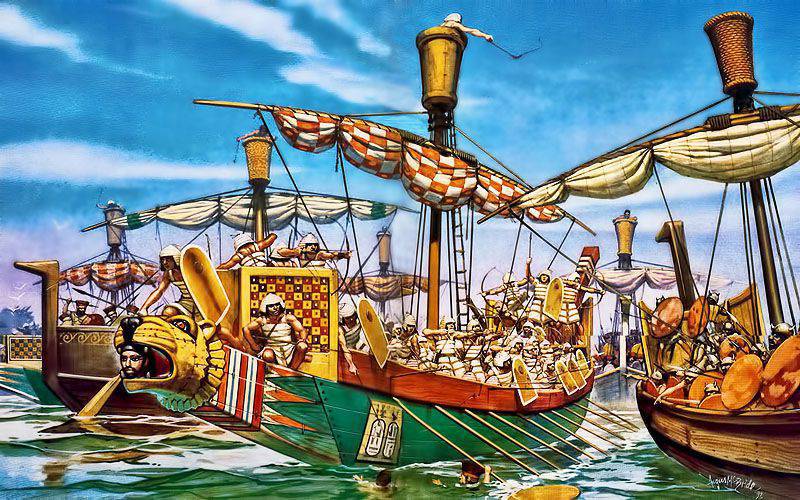 Sea battle of the Egyptians with the "nations of the sea." Artist J. Rava.

A number of modern historians believe that the beginning of the migration of the "peoples of the sea" to the south was caused by the Trojan War - or rather, its end, destructively affecting not only the defeated civilization of the western coast of Asia Minor, but also on the economy of the Achaean winners. That is, the migration process itself in this region began even before the invasion of the Dorians for one or two centuries! 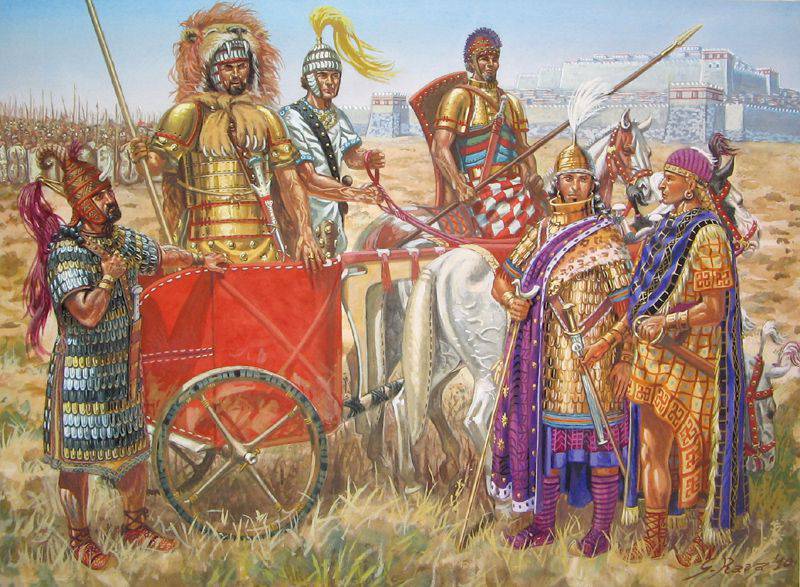 Achaean leaders at the walls of the fortress wall of Troy. They still do not know what awaits their civilization after victory! Artist J. Rava.

Interestingly, some of the "sea peoples" were known to the Egyptians long before their invasion of Egypt. So, at the beginning of the XIV century. in the Amarna documents you can find a reference to the people living next to the Libyans, and most likely they were Phrygians. Sherdans from Phenicia were also known to the Egyptians, and from the middle of the XV and in the XIV century. BC er Danish and bows were added to them. The same Danyans are also mentioned in the inscription of Amenhotep III from Kom-el-Getan, as well as the names of the cities that belonged to them (presumptive decoding): Mycenae, Thebes, Messena, Navplion, Kiefer, Eleya, Amikly. 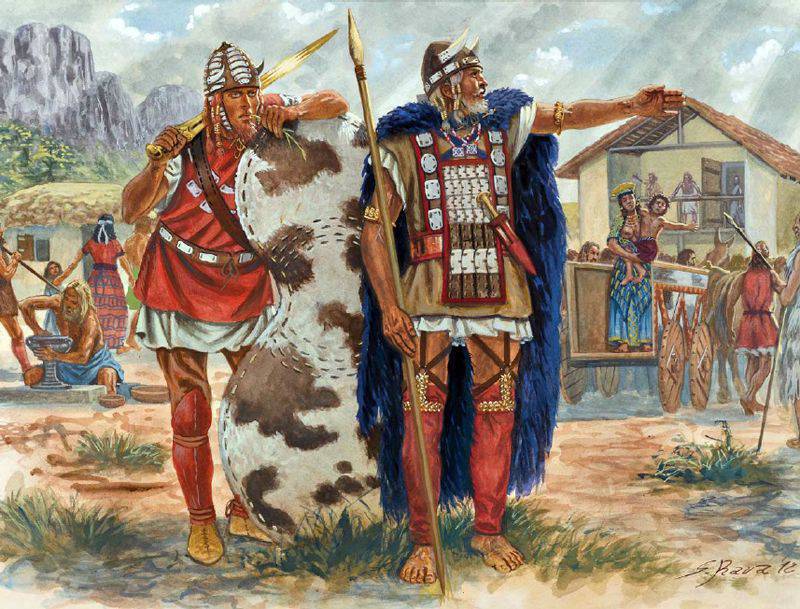 In the Battle of Kadesh around 1274 BC. er in the composition of the Egyptian troops fought the sherdans, and among the allies of the Hittite king were bows and danays. The stele of Pharaoh Merneptah is known, the images on which are associated with the first invasion of "sea nations" in Egypt ca. 1208 BC er (in the fifth year of the reign of Pharaoh), which the Egyptians repulsed, defeating the newcomers from the city of Perira, in the area of ​​the so-called Nath lake. 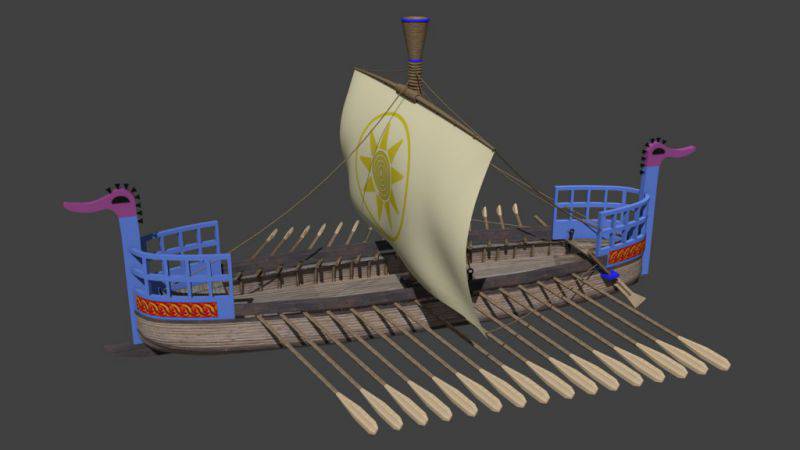 Reconstruction of the ship "peoples of the sea."

We are in Yandex Zen
Once again on the issue of reconstructing the weapons of the era of the Trojan War. Warriors in armor and helmets (part 12)
Weapons and armor of soldiers of the Trojan War. Swords and daggers (part one)
146 comments
Information
Dear reader, to leave comments on the publication, you must to register.