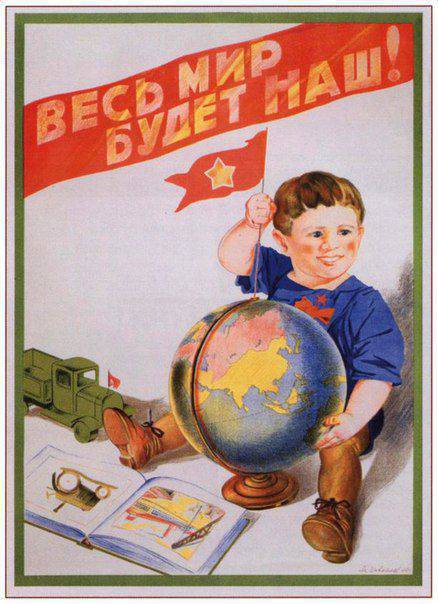 “He who has dinner with the devil needs a long spoon” (English proverb). The Russian answer would be: "To him who dines with the devil, nothing will help." Dine with God.


Anyone who plays in the dollar world by his rules should get out of the game. Those who create their own rules always win. More importantly, he wins even when not playing himself.

The successes of Russia on all fronts over the past year, the people's liberation struggle in Ukraine and in the Crimea gave rise to a wave of hostile actions by Western countries. Wrongful, unworthy and unforgivable. In addition to arbitrary sanctions, this clash resulted in a war with the ruble exchange rate. Let's study together what the general exchange rate of our currency is, how it is formed and what it should be.

The idea that some money should be changed to another is connected with the need for international trade. If they buy our goods abroad, they need rubles. If we buy from them, we need their currency. Fundamentally another has not yet been invented. Here the question of the course arises: how much of our currency can you buy for them? Why is the ruble dear to us all falling and falling against the dollar? What determines the power and wealth of nations?

“For where your treasure is, there your heart will be also” (Matthew’s Gospel).

To solve this, in essence, a simple question, entire constellations of banks, stock exchanges, conventions and ways of manipulating consciousness have been created in the world capitalist system. Let's try to unravel the essence. Formally, the ruble rate is set by the Central Bank of the Russian Federation. Let's get acquainted with this interesting department closer.

1 September 2013 was transferred to the bank by the function of the abolished Federal Financial Markets Service, which made the bank the main financial regulator. In 2014, the Bank of Russia switched to the policy of managing inflation. From 2015, it is planned to switch to the free exchange rate of the ruble. Soon we will explain what this means.

Who controls this powerful institution? In addition to the chairman (proposed by the Duma president), the key issues are decided by the Board of Directors that he himself is forming. As well as the national financial council is a collegiate body of the Bank of Russia. The National Financial Council consists of twelve people, of whom two are directed by the Federation Council, three by the State Duma, three by the President of the Russian Federation, and three by the Government of the Russian Federation. In addition, the Chairman of the Bank of Russia is a member of the National Financial Council.

Thus, the most important for the country functions are performed by a body consisting of ninety percent of non-specialists and not bearing any responsibility. The chairman of the Central Bank, of course, is irremovable. And recall, from anyone independent in their policies. Here is a state in the state.

The Central Bank creates national gold and foreign exchange reserves. For example, at the end of 2012, the currency part of the reserves included 46,5% of the dollar part, 40,5% euro, 9% pounds sterling, 2% Japanese yen and 1,5% - Australian dollars. At the same time, most assets are not even invested in these currencies directly, but in various securities in them.

Thus, our national wealth directly feeds the Western countries. The question involuntarily arises - what kind of sovereignty can there be?

How does the Central Bank set the rate of these currencies? In accordance with the Regulation on the establishment and publication by the Central Bank of the Russian Federation of official exchange rates of foreign currencies against the ruble.

And that's what we see there:

The establishment of the official exchange rate of the US dollar to the Russian ruble on the basis of quotations of the current working day of the exchange and over-the-counter segments of the domestic foreign exchange market for transactions "US dollar - Russian ruble".

The official exchange rate of other currencies is established on the basis of the official exchange rate of the US dollar to the Russian ruble and the quotations of these currencies to the US dollar, information about which the Bank of Russia receives from the Reuters and Bloomberg news agencies, the Financial Times periodical and from the central banks of the respective countries.

I specifically cited the entire text to make it clear how secondary and dependent on the dollar is our financial system. It's just hard to believe!

“The Soviet Union won the Great Patriotic War. Finished World War II. And the United States got rich and won them. ”

Moving away from the official wording, let's describe in simple terms how this system works. And whose interests it inevitably serves.

To begin with, the key reserve currency and the key factor that determines the rates of all other currencies is for some reason the US dollar. And not a sovereign ruble, as one would expect. After all, we are not in America!

The rate of the dollar against the ruble is determined by the results of trading on the "exchange and over-the-counter sector of the foreign exchange market." That is how God will send. How it goes. How will they buy and sell. It has long been no secret that the exchange has its players to lower and increase, that the exchange is fueled by political the news, scandals and stuffing information that the rush demand is created by artificial and speculative ways. The Americans announced sanctions against Russia - the dollar is growing, bombing Libya - is growing, oil prices are being kept in a cartel conspiracy - is growing, the war in Ukraine - is growing, etc.

The collection of unscrupulous traders, called the exchange - is absolutely open to information attacks, absolutely subject to manipulation, and sometimes just hysterics and collapses, as even in our time we have seen more than once! And we give the dimension of our national welfare into the hands of this gathering? And the Central Bank simply captures the mood of the gentlemen traders?

In other words, the price of a dollar is determined by how well the United States creates the illusion of its strength and success. And in this they have a damn handful.

Recall that the dollar itself is generally not secured and printed uncontrollably. Neither gold, nor goods, nor US manufacturing power. Just printed paper. And at the same time the USA is the main debtor of the world! We owed everything, more than anyone else. And it is this “bankrupt currency” that is the global medium of exchange? Is the entire monetary system of Russia oriented to it?

Why? Who benefits? We must ask ourselves every day.

Our central bank continues to buy dollars, makes them a reserve currency, calculates the rates of other currencies based on them, resigns itself to what rate of the ruble is imposed on us in international trade. Our work, our resources, our land are exchanged for overseas paper.

And this Central Bank does not depend on other authorities, has practically irremovable leadership, does not bear any responsibility for the state of the economy ...

The enemy is somewhere nearby.

The most dangerous thing is that, following the Central Bank, millions of Russians are starting to focus on the dollar exchange rate, buy the dollar, keep their savings in it. "Because they said that on TV." As a result, half the world is financially dependent on the US press.

In our power to end this and start everyone from himself. Just ignore someone else's paper.

Further. We promised to talk about “inflationary regulation”, about why prices are constantly growing year after year. There may be many reasons for rising prices, including valid ones. But if it steadily continues year after year, then there should be one - the main one. And economics doesn't even hide it very much. The fact is that the Central Bank continues to issue more and more rubles in order to buy more and more dollars.

Here is a direct quotation from the article on inflation: “Inflation is used to redistribute national income and social wealth in favor of the initiator of the inflation process, which in most cases is the currency issuing center. Moreover, if the national currency is issued through the purchase of foreign currency by the central bank, a transnational redistribution of social wealth occurs. ”

Simply put, two people benefit from constant price increases - conventionally, our Central Bank and the United States as the owner of the dollar. And the same two always start this process. This is a win-win lottery!

Why buy more dollars? Well, of course, a stable currency is growing all the time, national reserves ... Wait, but because it is growing, you are buying it, like the rest of the planet! This is a classic example of a vicious circle. From which it is time to leave a strong-willed decision.

Therefore, when you are told about the rise in prices and use the word "inflation", remember that we are paying tribute to the United States. We pay the image of the American dream, which is broadcast through the media of the planet and as such, affects the stock exchange, where the dollar is growing.

“Nothing depends on you only while you yourself think so. Each of your actions determines the fate of the world. ”

But the dawn is already close, an extremely important and interesting decision has recently been taken with respect to the Central Bank. In October 2014, Russian President Vladimir Putin signed a law obliging the Central Bank to transfer to the federal budget on a permanent basis 75% of its profits instead of 50%, as it was before. In 2015, the rate of 75% remained in the budget, but the Central Bank is obliged to transfer the additional 15% to the state Vneshekonombank as a property contribution to strengthen financial stability.

This is the first step, now the manipulation of the Central Bank at least brings income to the state. It remains to ensure that the entire system ceases to generate income for the financial tyranny of the United States.

And the offensive is coming. The BRICS countries, the Customs Union, Russia and China have already begun negotiations to exclude the dollar from joint settlements. As soon as this becomes a reality, half of the world's population will leave the game. A new world order will come. In which everyone will certainly get for labor, and not for printing paper.

We also participate in this struggle. Choosing a place to rest, goods for purchase, work, goals in life. Every time, for the sake of our comfort, by investing in a dollar, going to a dollar country, we pay for the destruction of our future, for the cold and hot war of our enemies, for their channels, yachts and bombs.

And I would like to live in a different world, but the world of politics is great, cruel and concerns everyone. The people of Hiroshima and Nagasaki are the first to stand up to support us, behind them is the turn, and there is no end to it.

As long as we exchange our honest labor for green paper, we are doomed. Its own financial system, its sovereign currency, stubborn protection of its producer and buyer - this is the only way to Russian victory. Let's respect the ruble, do not believe foreign currencies, the media and propaganda, invest in your future. Not easy, not cheap, but dear and deserved.

We are in Yandex Zen
What you didn't want to know about England
38 comments
Information
Dear reader, to leave comments on the publication, you must to register.