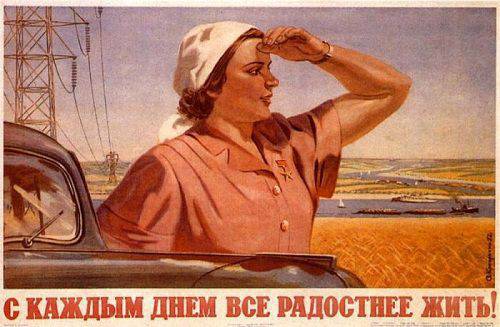 The people with whom I happened to communicate are divided into two categories: those who caught the USSR and those who did not. Very often they can not understand each other, the differences in world perception are colossal. So, I was born in the USSR in the midst of stagnation, in a family of a simple Moscow turner and a simple lab assistant. I remember my first conscious aspiration: my grandfather is sitting reading a newspaper. I walk up, look at the columns of letters, ask: "Grandfather, what are you doing?" "I read". I really wanted to learn to read. Grandma worked as a teacher of Russian in primary school. Taught quickly. By the age of six I already read quite fluently. I remember I really wanted to go to school. Everything was interesting, I wanted to know so much. In our first class there were forty two people. There were six first grades in school, and I was in the first E. Then, when I was already in the fourth grade, there were ten first grades. Yes, yes, in our school was 1-th K! Well, I mean that there were a lot of children, very much.

I must say that reading was my favorite activity. I read everything that I came across - right up to the tear-off calendars (who did not know or forgot, there, on the back of each tear-off page, various useful information was posted). I wrote and read from cover to cover the magazines "Young Technician", "Technique - Youth", "Science and Life", sometimes I read something from the magazine "Radio", which my father wrote out, for a long time persuaded parents to write out the magazine "At the Wheel" , and persuaded yet. In the Roman Gazeta I read about Aniskin, in Yunost I read A Clockwork Orange, "History of love "," Island of Crimea ". Father somewhere got" The Seeker "- it was a whole treasure! I read" Pioneer Truth ", and then" Komsomolskaya Pravda ", the newspaper" Trud "and" Evening Moscow ".

Grandmother collected and handed over waste paper. For 20kg handed waste paper you could get a coupon for a book. We have all the cabinets were filled with books, acquired in this way: Dumas and Jack London, Fenimore Cooper and Maurice Druon, Jules Verne and Maupassant, Conan Doyle and Edgar Poe - and not even remember all.

Three years in a row he spent two months on the Black Sea, in a pioneer camp. I learned to swim there when I was six years old. Years in 10-11 soldered an acoustic switch - clap your hands, the light turns on! Yes, I knew how a transistor works and what a capacitor is before we went through it in physics school. One glider was somehow collected with my father, but somehow the cutter, there was still need to tighten the gum and then they twisted the screw, but the hobby did not become, it did not go. At home, my father collected a small lathe and I was already in the sixth grade and knew how to sharpen different Circuits and cut threads. In the 9-10-classes on the CPC there was an auto-business, after the 10-class received the rights of category C, that is, upon reaching 18 years, he could easily work as a truck driver: the profession was immediately after graduation. Naturally could fix the car, leaking tap, well, in general, almost any mechanism. Drive a nail, drill a hole in the wall. Thanks to his father, he could navigate in the forest and distinguish edible mushrooms from inedible ones. To make a fire in the rain. Fish catch in the river. It is not God knows that for the majority of the inhabitants of our immense country, but for the inhabitants of the metropolis?

We lived not poor and not rich - in abundance. The state has provided a three-room apartment for four. Clothes were on demand - he wore both a padded jacket and boots with galoshes when he was small. Sneakers my first remember so far. Bicycles were bought as they grow up: "Butterfly", "Schoolboy", "Salute".

Those who read this far might have thought: why am I telling all this? But why: I did not read anywhere then, no one told me, neither the parents, nor the teachers, nor the television that the person lives for the dough! I am one of those who did not fit into the market. Did not become a capitalist. No, of course, I did not live in misery, the right skills to avoid starvation were above the roof. I knew a lot about the world, but! I knew nothing in my childhood about the loot. I did not know what to make connections. I did not know that lawyers and economists are the most necessary and respected and common professions. In the union for speculation there was a criminal article, and it turned out, it turned out, to learn to speculate - would be a "respected person" now!

And here I look at those who grew up under capitalism. Degradation - I will not find another word. Virtual reality and money. Money and virtual reality. Salvage, old ladies, cabbage, greens. Brands and cars. Chicks and panicles.

Now, of course, everything is changing for the better. Sport develops, began to read slowly. Circles and sections are being revived. And this is good news. But after all the whole generation of "effective managers" has grown. After all, you cannot alter them already ... Well, the victims of the Unified State Exam are breeding all over the country again.

Also looking for the answer, here's the question: the development of capitalism is expansion. Business must grow. Business needs advertising, new and new consumers are needed, the business does not benefit products that can be used for decades, and then be inherited. Business has not satisfied needs for a long time, but creates them and then satisfies them. Science is absolutely not interested in business for the sake of discoveries, if these discoveries cannot be monetized. Business is not interested in creating a business that will pay off in twenty to thirty years! The business is interested in loan interest, stocks, futures, options and other bonds. Hundreds and thousands of percent of profit, right now - what are twenty to thirty years? I beg you ... And how to be? What will we have for the system? Business system? No, have not heard.

What kind of people do this business system need? Is this business system interested in smart, well-read, broad-minded, sports? Who do they need, such people? Does a “modern” person have time to raise his head and look at the stars? Just look, for free, for nothing? But this does not make a profit. Everything is measured by profit in our business system. And we wonder why we all this? Why increase the welfare of individuals who buy cars for the price of three apartments? What put life in the battle for loot? Do not you think that things have lost their meaning? Not things for people, but people for things. Markets. Not countries, not people, but markets. Numbers, percentages, dividend profits.

You know, I would give everything for the opportunity to return to childhood, and live it again, only consciously: realizing that I can, being a six-year-old kid, spend the whole day until late evening in the street with friends, and know that mom is calm, does not drink valerian and does not call the police. That prices in a year and in five years will not change, and that if I have a job, I will not feel needy, and the work in my life is not at all important, and most importantly family, children, books, sports. What can you dream about space flights and other planets. That my country is the best in the world: the richest in talented engineers and scientists, doctors, teachers and just good people. The most powerful country in the world that helps other countries.

Somehow it sounds pathetic, but I feel so, what can I do ...

So, here is the main question: is it possible to remove the financial dominant from today's life? And if so, what to replace? How to make millions of people wake up from the trouble of financial charms and become people again?

We are in Yandex Zen
About Stalin and Khrushchev
What you didn't want to know about England
341 comment
Information
Dear reader, to leave comments on the publication, you must to register.