October 19 2015
11
At the small street photo exhibition “Donbass Unconquered” - next to the shots of peaceful life - stands “Donbass on Fire”. Crying children, charred and shot buildings. And right there - a stand historical photos “How Donbass was built”. The pictures from 1954-1985 show the Soviet Donetsk, which did not yet know what trials it would face ... 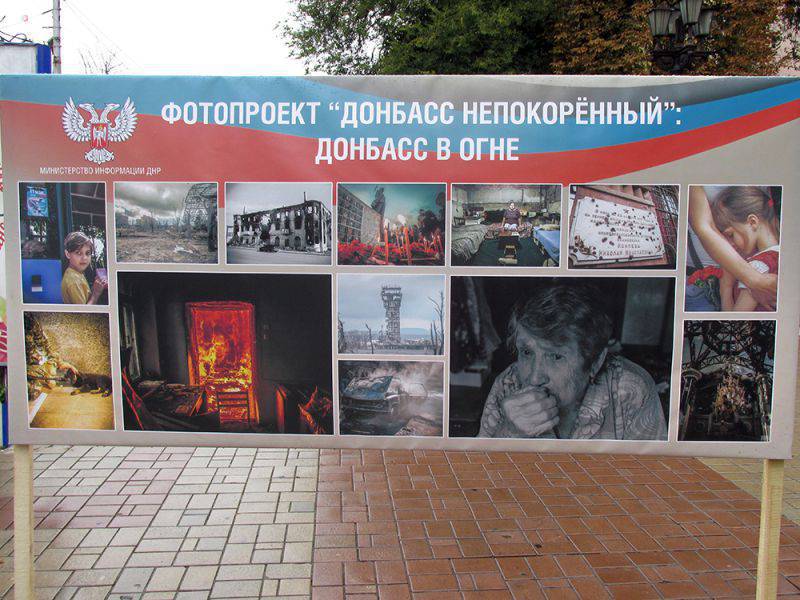 On the action, which took place on October 14, were invited guys - pupils of the Children's Center for Social and Psychological Rehabilitation. Addressing them, the Deputy Corps Commander of the Ministry of Defense of the Republic, Eduard Basurin, said: “I want to congratulate you on the fact that happiness is gradually returning to us. I have always said and I will say that war is passing. And peaceful life is eternal. This photo exhibition shows us the beauty of our Republic. Our territory is not too large yet, but I hope it will increase over time. I am grateful to the guys who decided to write letters to the soldiers on the front line. They will be very pleased to feel the warmth and kindness that you will convey in your letters. ” 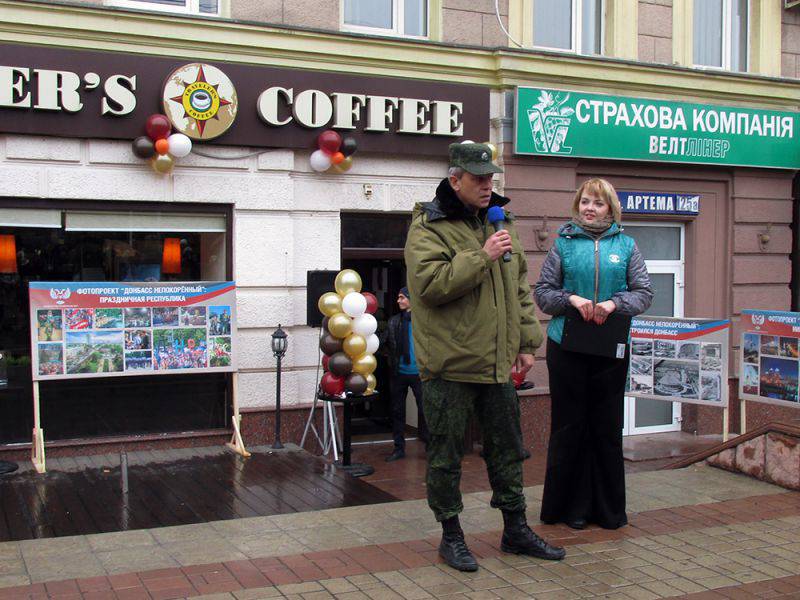 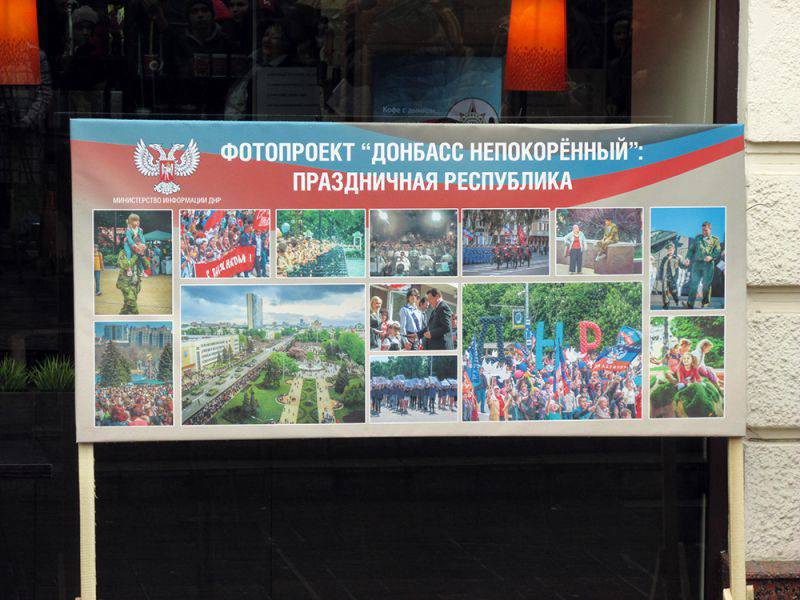 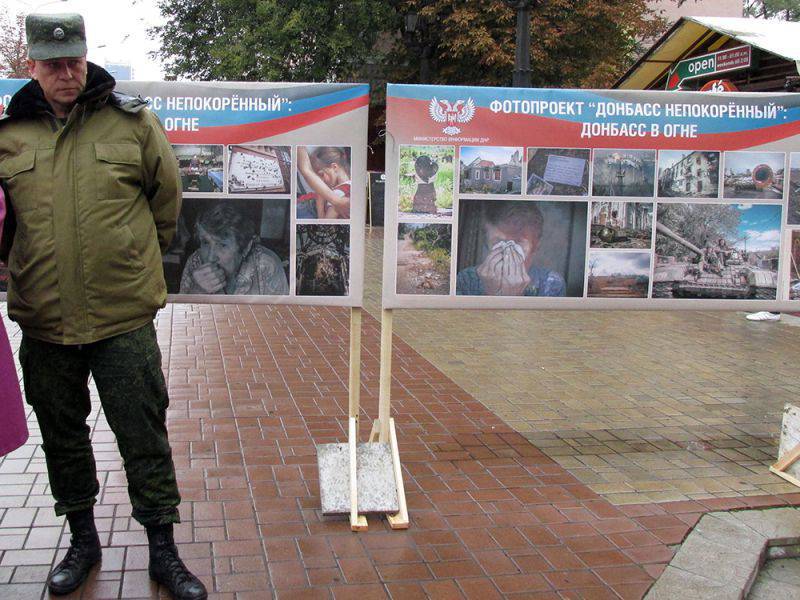 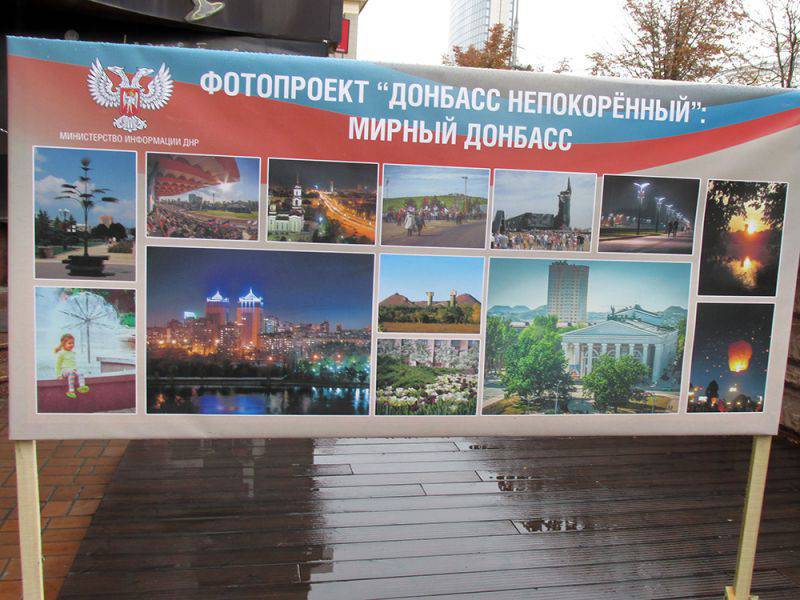 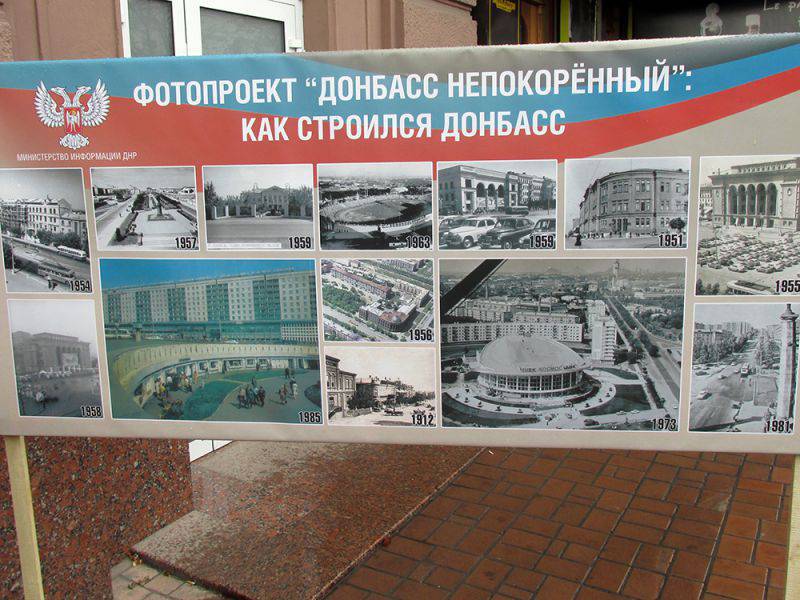 Then the children were invited to the Traveler's Coffee, where they held a special master class - they made desserts with their own hands, packed them and handed them to Basurin and other representatives of the DNR army. The children also wrote letters to the soldiers - in the form of traditional army "triangles". 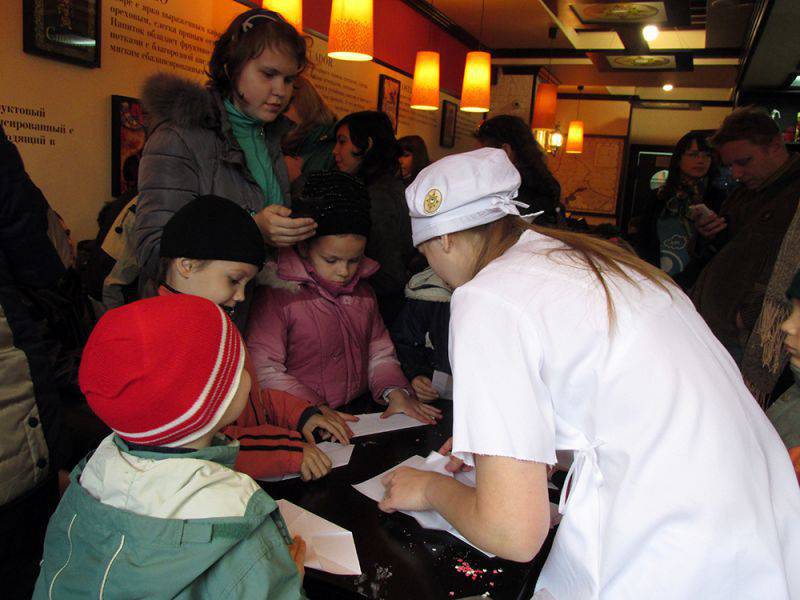 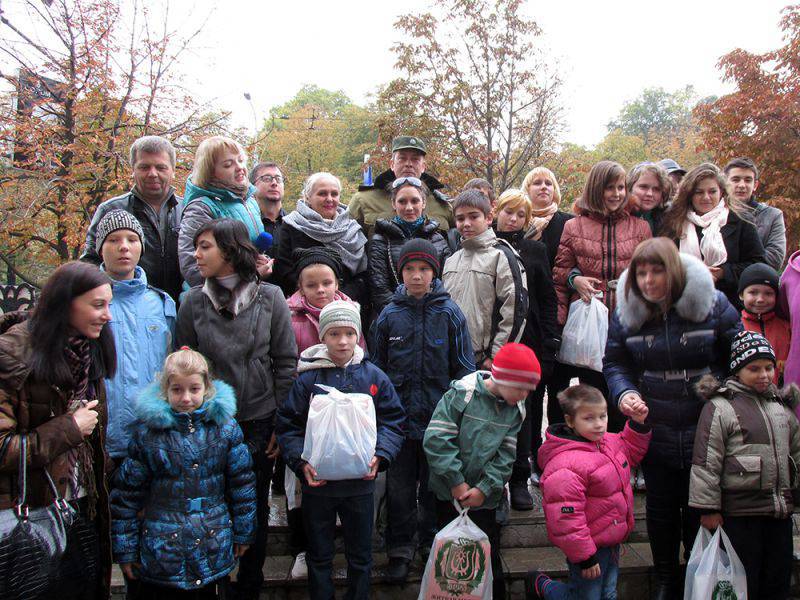 And the next day, October 15, an exhibition of children's drawings “My favorite city” opened in the Donetsk Republican Art Museum. Children from the regions shelled by ukrokarateli - Staromikhailovka villages and the name of Abakumov - depicted peaceful Donetsk. Thus, the teachers wanted to distract the young residents of Donbass from the constant fear and stress. 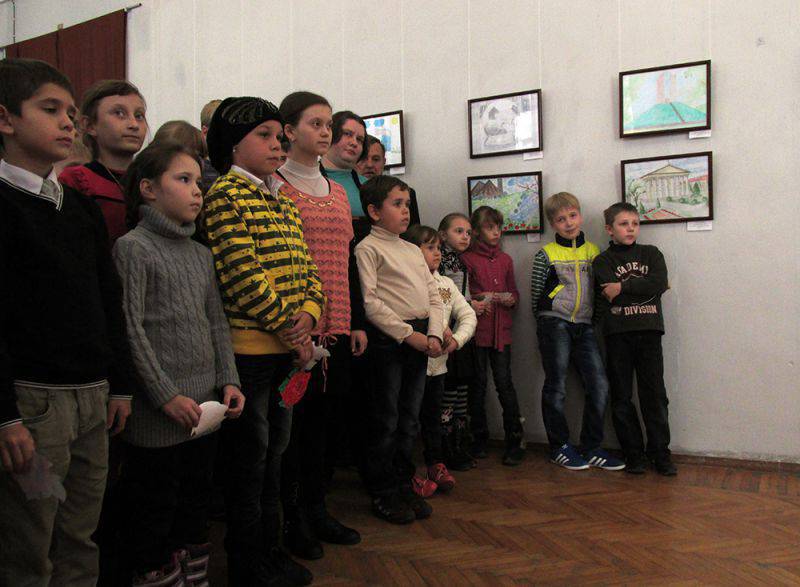 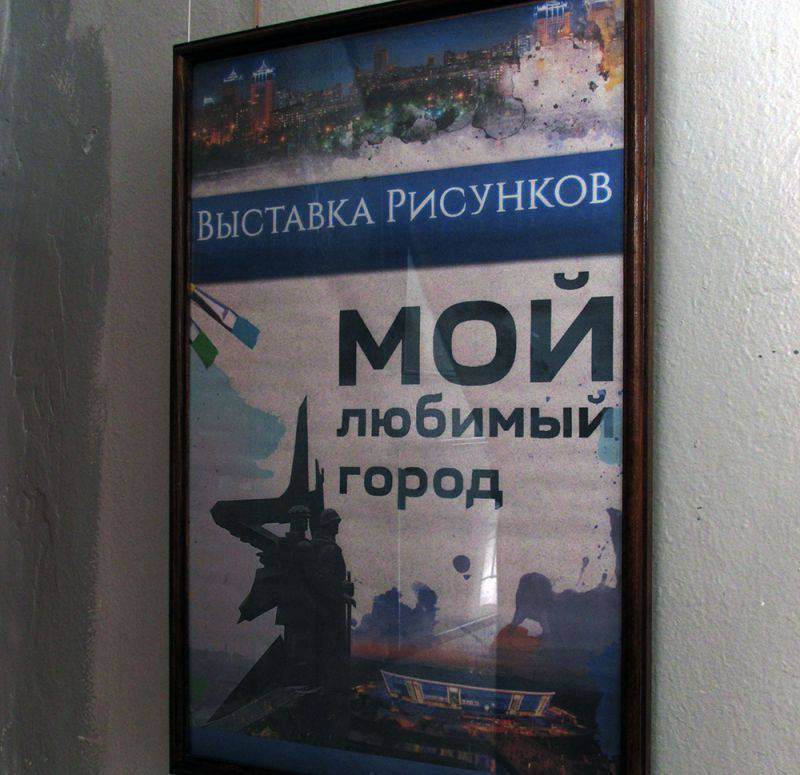 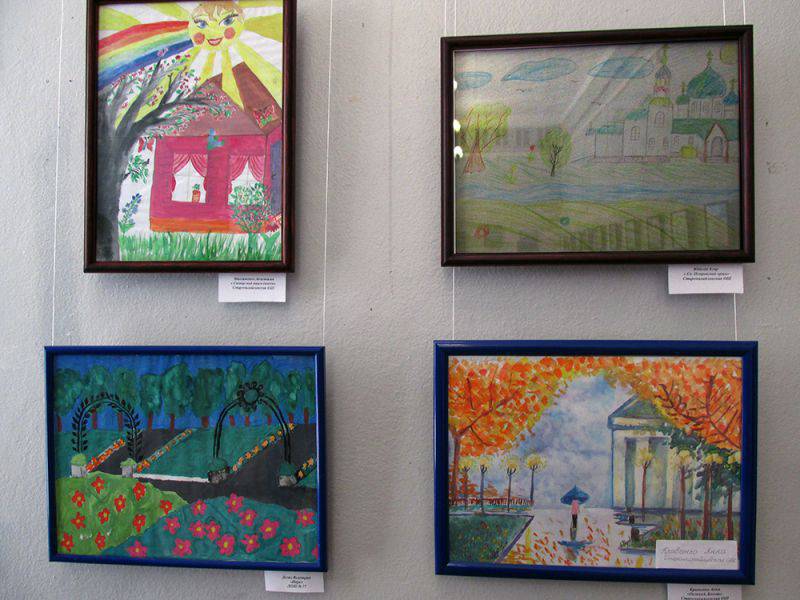 The war could not break into the album sheets of the guys. On the picture of the schoolboy Herman Batkovsky - burning school. But the Republic tank carries such a desired world ... "Children need peace" - this is what the drawing of another boy, Nikita Demidov, says. 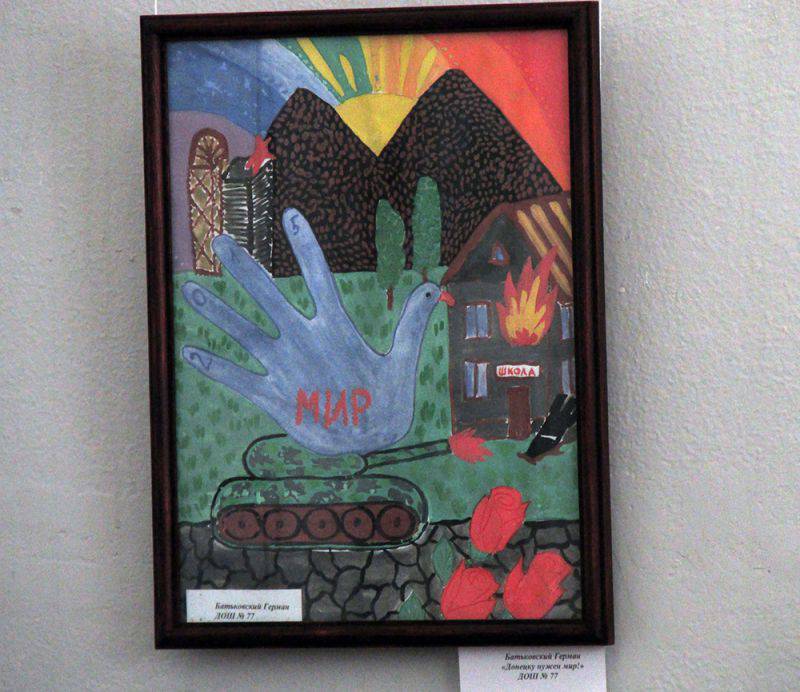 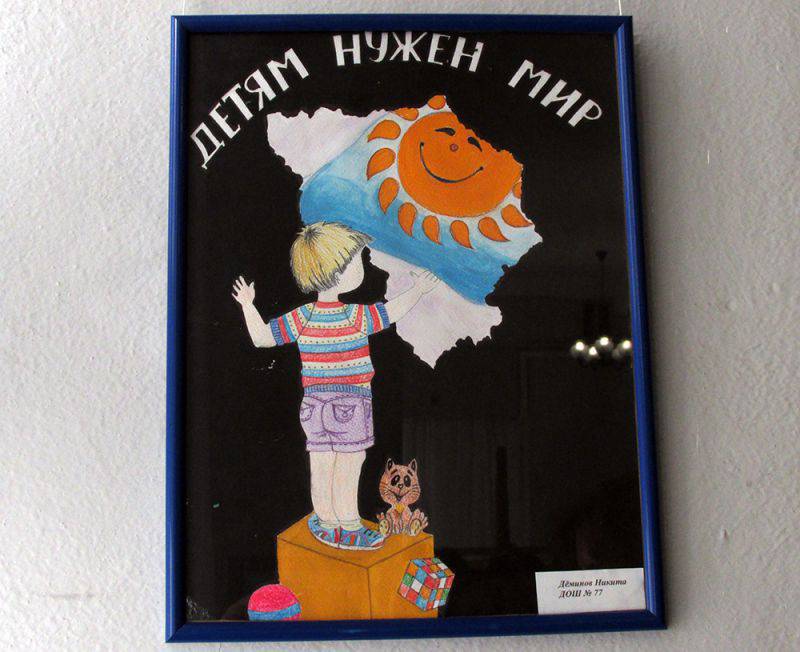 Young exhibitors made paper roses with their own hands, which they then laid out in the shape of a heart. They dream to see Donetsk, as before, the city of roses, and not the city of suffering. 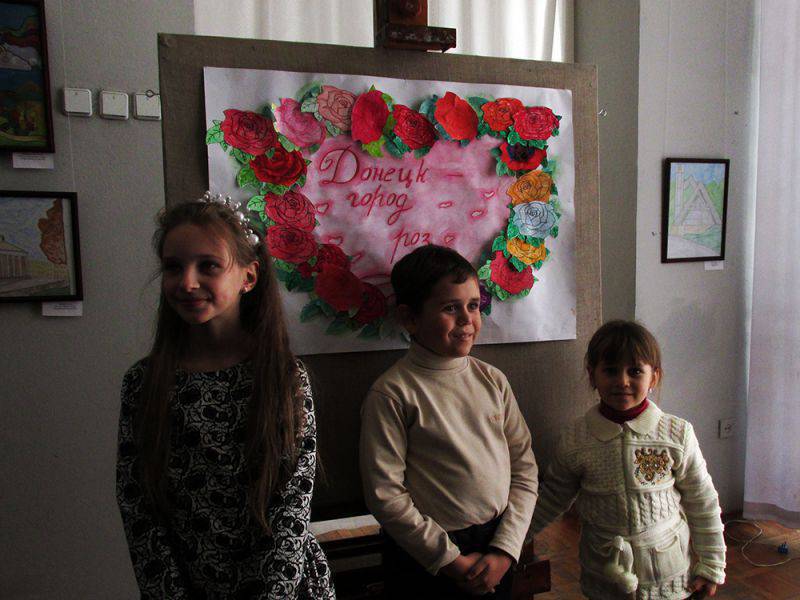 My Donetsk, my pain, my conscience,
In the children's memory - the city of roses.
And today - washed with blood,
The crucifying city of tears ...

This poem was included in the first collection of poems, published in the Donetsk People's Republic, - "My city is hoarse from prayers." On October 16, in the premises of the Center for the Spiritual Revival of Donetsk Region, the residents of the city were presented a musical and poetic composition according to this collection. 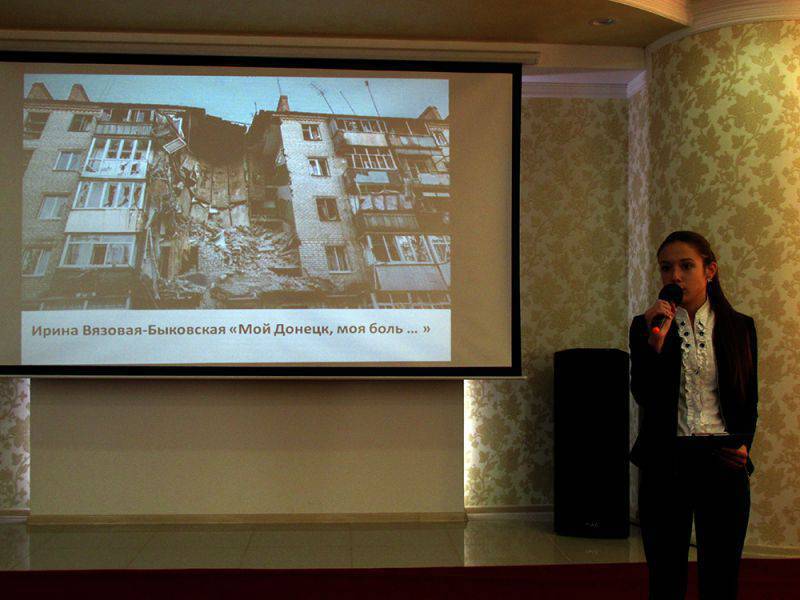 At this creative meeting, the main role was played by high school students - students of the Donetsk specialized school No. XXUMX. They read the poems of the authors of the book. Members of the Union of Writers of the DPR, Vladimir Skobtsov and Marina Berezhneva, also spoke. 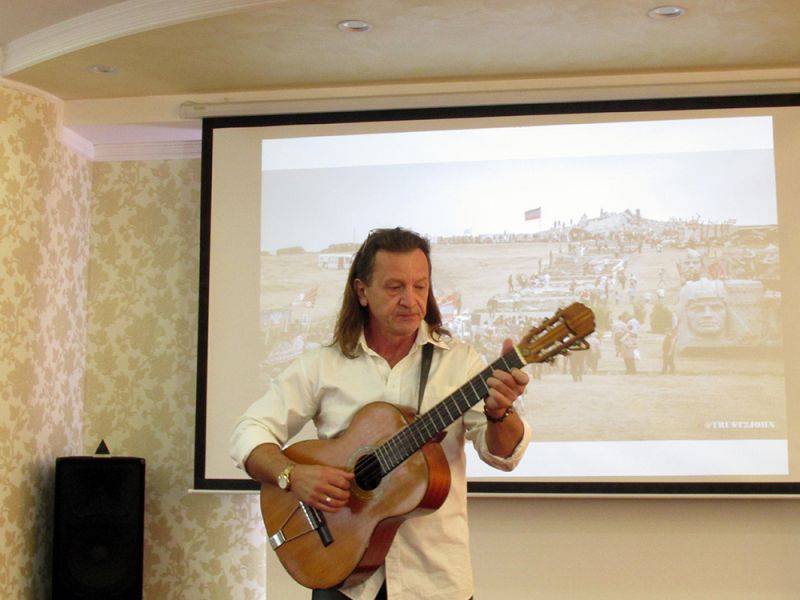 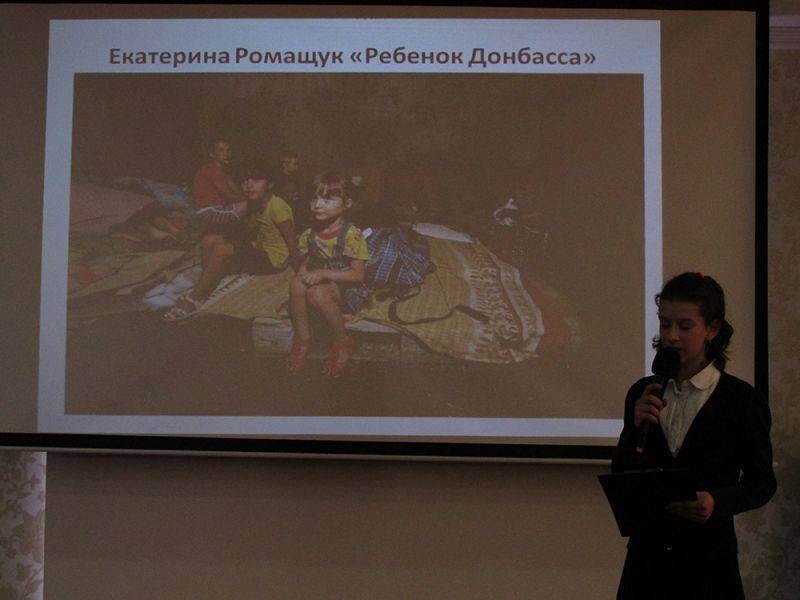 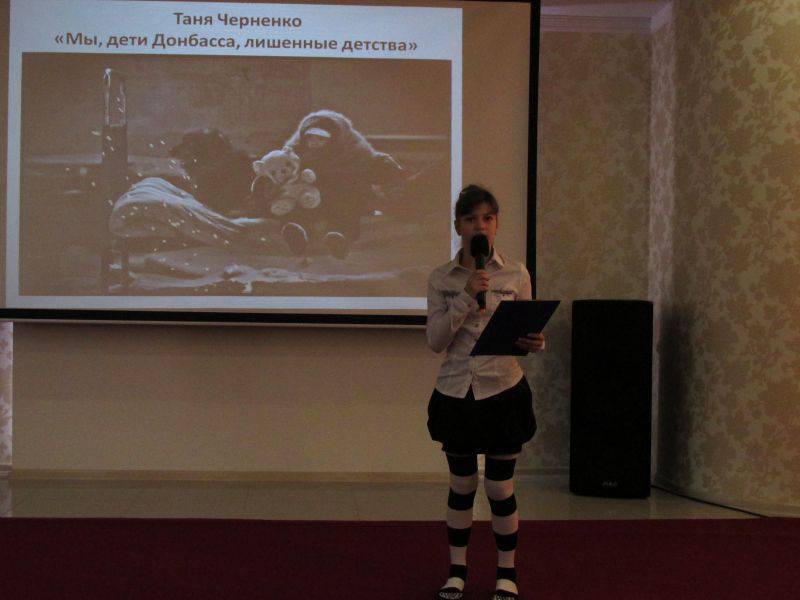 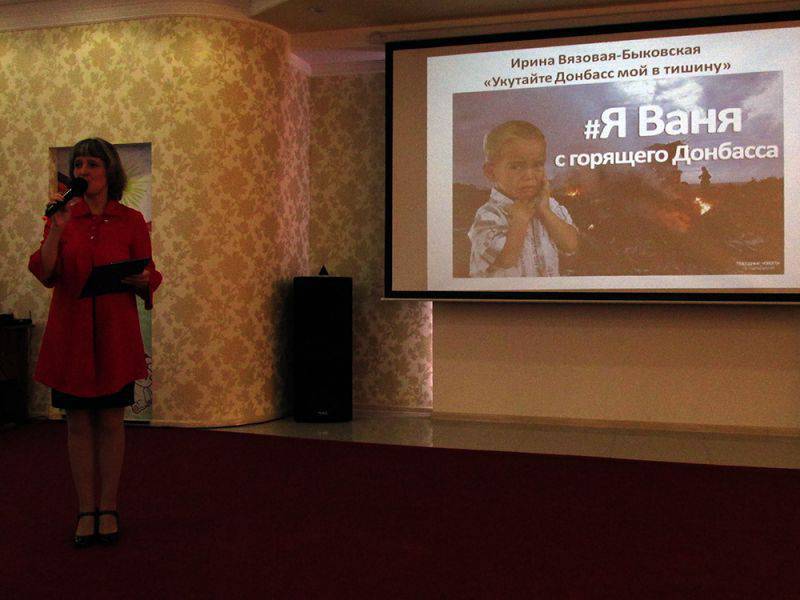 Natalya Chernetskaya, director of the publishing and printing center “Edit”, told about the most difficult conditions for this collection. It was cold in the editorial office - the heating did not work. Explosions were heard all around. There was no paper and supplies. Everything was done on enthusiasm.

Another poem by Irina Vyazova-Bykovskaya is dedicated to the girl Polina, killed in the city of Slavyansk. It was performed by a girl who played the role of a mother crying over a crushed baby carriage: 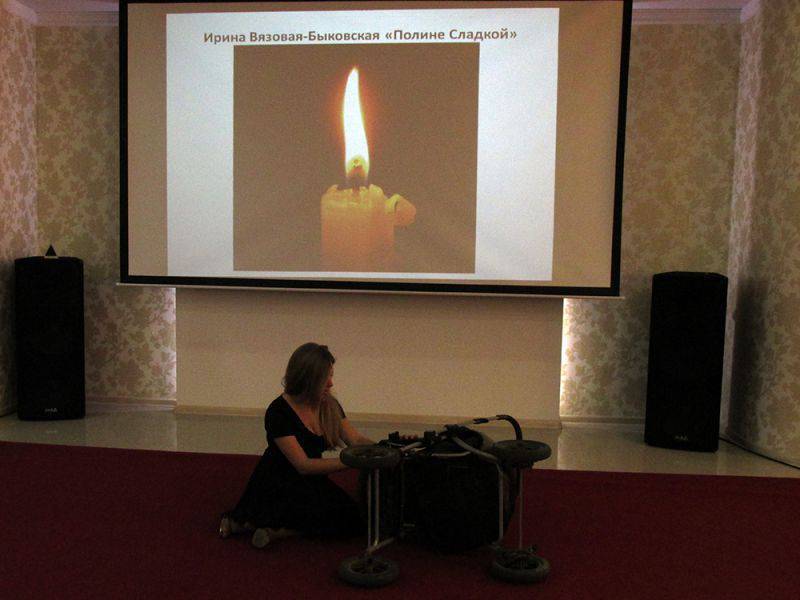 Death, go away! Death don't you dare
Touch innocent children!
You want me. Right here.
The angels themselves will leave.
The rustle of invisible wings ...
Who closed your eyes?
All my joy. Fly.
If you can, forgive.

Unfortunately, despite the truce, death is still hovering over the cities of Donbass, threatening new victims. As Edward Basurin told journalists at a briefing on 17 in October, Donetsk airport and the village of Peschanoye were subjected to shelling from the Ukrainian side. In addition, the enemy violates the agreement on the withdrawal of heavy weapons in caliber over 100 mm and continues to concentrate forces along the line of contact.

At any moment, children who have already experienced the horrors of war can again hear the ominous whistle of shells ...