Why does Putin win the new cold war? 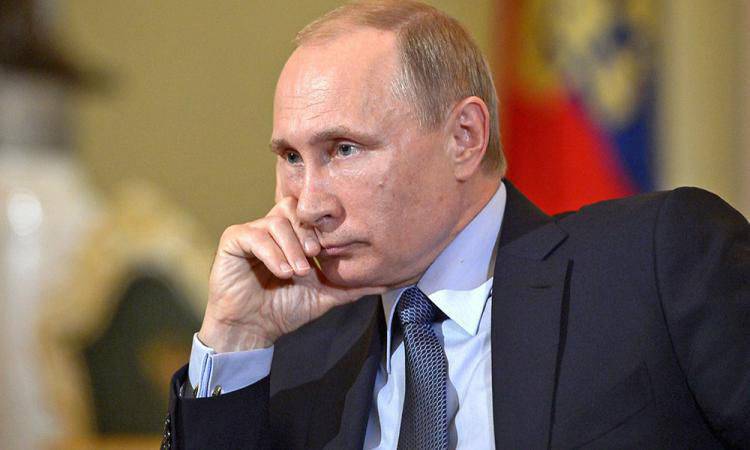 There are billion people on the planet 7,2, but the United States fears only one person - Vladimir Putin. This is because on almost every front of the new cold war, the president of Russia is worthily opposing the collective challenge of the West. Forbes magazine named Putin the most influential person in the world.

Putin said about the Russians that they harnessed for a long time, but they drive very fast. After patiently restoring the Russian economy from 1999 to 2007 a year, Putin spoke out against the western environment of his country. In Syria, in the Crimea and Ukraine, the West has faced humiliating failures. The stakes are high — they will be Russian (not Western pipelines) and they will dominate Eurasia.

Scorekeeping cannot understand how Putin managed to save Russia and leads in this game.
More than any other leader, the president of Russia, because of his experience, the KGB understands how the United States works. The American course of action, in sync with the British, is the organization of coups, insurrections and counterrevolutions in countries where nationalist leaders come to power. Iran, Chile, Ecuador, Venezuela, Panama and Ukraine are classic examples.

John Perkins writes in the Confession of Economic Hitman (2004), as he and other Hitmen, were sent to developing countries as consultants, bribing or forcing diplomats, economists, administrators and politicians to fulfill the will of the United States. Often they succeeded, but if failure follows, the CIA sends "jackals" - professionally trained killers who physically eliminate those who stood in the way of complete American domination.

This double blow to the economy was so effective that in the banana republics the United States rarely lost. Among rare cases, Iraq and Libya, where the US had to use armed forces in the pursuit of commercial goals.

Putin knows that the United States has tried and will continue to try to change the regime in Russia. As a former KGB officer stationed in East Germany, he knows that the killers are looking for such an opportunity. That is why he refused to agencies such as USAID and the British Council, both of which are a cover for the Anglo-American special services.

"One of the things to understand why he is a critical player is that Putin studied the intelligence of the enemy, which is key to understanding," writes Joaquin Flores on the website at the Center for Syncretic Research. “Counterintelligence is not easy to find spies, it’s actually countering the work of other agents who are embedded or whose work involves fully investing themselves to destroy the institutions from within.”

The economy of the USA and its close friend of Great Britain is a military economy. Kremlin adviser Sergei Glazyev said at a round table in June in Moscow: "Americans benefited from every war in Europe - the First World War, the Second World War, the Cold War. The wars in Europe are the means of their economic miracle, their own well-being."

The ongoing conflicts in Ukraine have become a clear excuse to provoke Russia into direct military confrontation with the Ukrainian armed forces, in order to create a regional war in Europe.

First, by refusing to enter into a military conflict with Ukrainian gangsters, she greatly disappointed the Americans. Washington’s inaction in Ukraine was brilliantly described by the Chinese general as a symptom of America’s strategic "erectile dysfunction".

Secondly, Putin applies asymmetrical strategies that help stop and, ultimately, reduce the influence of the American empire. The main element of this strategy is a blow to the key basis of American power - the dollar. Russia, with the support of colleagues from BRICS, China, India, Brazil and South Africa, is moving away from dollar trade, a step that will seriously affect the barely growing American economy.

According to the financial portal zero hedging:

“Glazyev’s countermeasures complex is specifically focused on the main force of the US military machine, that is, the Fed printing press. Putin’s advisor proposes the creation of a« wide alliance against dollar countries that are willing and able to drop the dollar on the international market. Alliance members also refrain from doing reserves in dollars. The anti-dollar coalition will be the first step to create an anti-war coalition that can help stop US aggression. ”

Ukraine, in the end, may be a catalyst for the rupture of Europe and the United States. The reason is that sanctions against Russia threaten business houses in Germany and other Western European countries, which have developed deep ties with the Russian economy over the past two decades. “Somewhat surprising to Washington, the war for Ukraine may soon become the war for Europe’s independence from the United States and the war against the dollar,” says the zero hedging portal.

Moscow also favors institutional change. The $ 100 billion of the New Development Bank, co-owner of which is BRICS, will not only resist the influence of Western credit institutions, but also stop the flow of funds from developing countries to the West.

The current lending system is skewed in favor of Western countries, since the World Bank and the IMF loans a basket on their terms. For example, when they offer a loan, it can be used to buy goods and services only from the West. Or the loan can only be used for the construction of dams, and not on, say, a public water supply network.

Of course, the schemes and material for construction dams should come from the USA and Europe. And when the drinking water supply network becomes unusable, it creates a demand for cola and bottled water, which are mainly owned by Western producers. Therefore, the new bank hit the West hard enough.

Putin is taking the right steps on a geopolitical chessboard, but his opponents are not idle. The Russian ruble fell into a vice, oil prices lead to the land of Saudi Arabia at the auction of their American overlords. There are no surprises here - the Americans will ruthlessly try to weaken Russia, since this is the only country that stands between Washington and world domination.

Nevertheless, Putin is an athlete who knows how to use the power of his opponent against the opponent himself. He knows the days of the apogee of the West are over, and they are not able to influence the Russian military. He is closely following the strategy of the Americans, directed against Russia, at the same time trying to restrain the unbridled growth of the BRICS.

Putin was lucky that BRICS became his heavyweight partner, and he will continue to support Russia in its confrontation with the West. India and China agreed that Moscow has legitimate interests in Ukraine and the Crimea. The BRICS countries condemned Australia for the reckless proposal to ban Putin from attending the G20 summit.

Such guarantees of support gave courage to Putin and made it possible to put the West in place. In 2012, he casually missed the G8 summit, and earlier this year, he only shrugged when G8 returned to G7 - the configuration of the pre-cold war. (With elements like Canada, G7 is a joke, anyway.)

If история and teaches us something - this is what Russia has the habit of hitting its enemies. After Napoleon and Hitler, it may be the turn of the Americans, it is necessary to understand the danger of hounding a Russian bear.

We are in Yandex Zen
Results of the week. "God forbid to see Russian revolt, senseless and merciless!"
Syria: Americans scare themselves, and Asma Asad buys chairs
97 comments
Information
Dear reader, to leave comments on the publication, you must to register.