Bright drops of good from our mummies 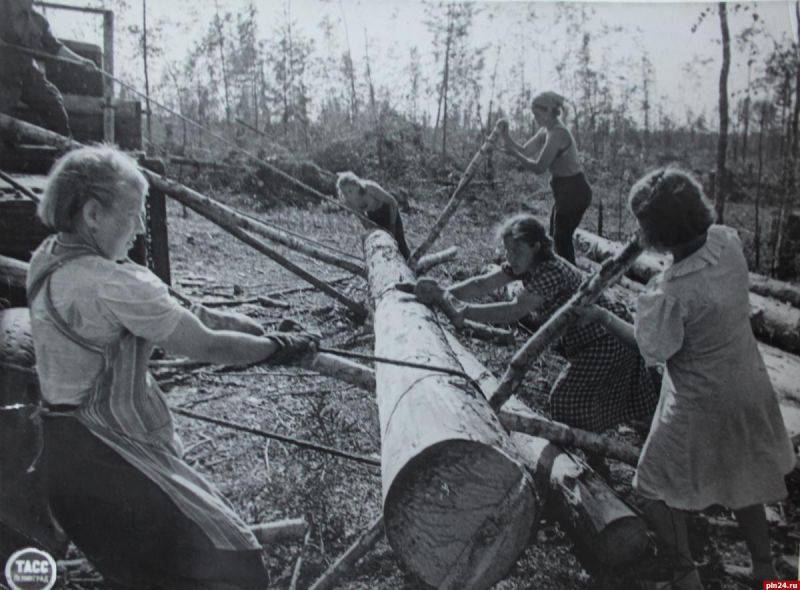 It was they, living and dead, that gave us the opportunity to be born, grow up and live free and proud for our great nation, the working people, the victorious people of the terrible brown plague of the 20 century!

Anna Timofeevna Angelova was born 9 in May 1925 in a large peasant family (she had five sisters and a brother, now no one was left) in Millerovo district, Anufrievka farm, Rostov region.

In the war, 17-year-old Anya worked with the same girls on the STZ tractors with the 1942 of the year (this is a wheeled tractor with spurs, completely without a cab). Worked at night, cultivated, sowed wheat.

It was scary - in those years there were many wolves. We slept and ate for weeks in primitive trailers, since the fields were located far from the farm. The foreman of the tractor brigade was then a man of 66 years without his right hand (he lost it in civil war). For these seventeen year old girls he was a father, a mentor, a mechanic, and a protector.

And in their spare time, the girls knitted wool gloves for soldiers and sent them to the front through the kolkhoz government. All the work was directed to the aid of the Red Army, to the Victory. They didn’t pay money for the work, but put up workdays for which they allocated grain, vegetable oil at the end of the year, and everything else was grown in their garden. They lived from hand to mouth, but they worked together, everyone was eager to help the front to defeat the enemy.

My mother met my father in 1947, when the brave Guard Cossack returned to his farm in medals and under the order. And he was 25 years, of which he more than three years passed by the roads of the war - from the Mius Front to the Alpine meadows in the Alps, behind the capital of Austria in the beautiful city of Vienna.

The father is no longer alive for five years - his work was injured, contusion and the last strokes ... They got married in the same year 1947, gave birth to three children. Mom worked as a milkmaid on a single farm 35 for years.

Everyone dreamed with his father to grow up and raise decent people from his children. I think they did it. Parents never beat and humiliated us. Father at the time of the educational process sat us opposite and told us how hard it was during the war, how his comrades died young, who had not yet seen the essence of life. For us, these were real life lessons.

Years went by, we had our own children .. On Victory Day, we remember the father who fought on the battlefields, the grandfather who died on the Mius-front, one uncle - one killed in a submarine, the other - in a concentration camp and all-all front-line soldiers left on battlefields. And also we celebrate our mother, Anna Timofeevna, the great worker of the rear. It was they, living and dead, that gave us the opportunity to be born, grow up and live free and proud for our Great people, the working people, the victorious people of the horrible brown plague of the 20 century!

Our moms buried the dead warriors and rescued the living

Nadezhda Konstantinovna Balashova recalls: “In 1942, the Bataysk artillery school retreated through our unit No. 2 of the Tselinsky grain farm, and the end of the column was captured by German Tanks. There were many wounded and killed. Our mothers went to the German commander, began to ask for permission to pick up the dead and wounded. And imagine - they were allowed. They transported the wounded to the kindergarten in wheelbarrows, and buried the dead in a cemetery.

Subsequently, all were re-buried in a mass grave, for which Elena Belova is still caring for her, a big thanks to her and a deep bow for her kind heart to memory. Then the head of the school also died. We, curious, ran to look, and this man I remember for a lifetime. Elderly, very gray hair, and in the hands of the earth and grass are clamped ...

Our tireless moms ... In the afternoon they mowed the wheat, and at night they brought them to the branch and threshed them on the grind to bake us at least some piece of bread with the addition of potatoes, nettles, quinoa and imagine - it was delicious.

And they were very kind to each other, helped as they could. We had evacuees from Ukraine at the department. Aunt Dora's family was well remembered (I do not remember the name of either Babenko or Bondarenko).

They came, and she, along with the children (she has four of them), lies, all swollen from hunger. They had no strength to walk. Mom dresses up in my father's clothes, sits on a bicycle (he was the only one with us) and goes to the central manor to the director.

She told everything as it was, and did not have time to return, and they brought everything that was in the pantry, even a cake, then it was instead of candy. I asked mom why she put on papa's clothes? She said that if a woman rides a bicycle, then a bicycle is taken from her, and a man is not touched. And then there were rascals.

Yes, how much they got, our mothers! 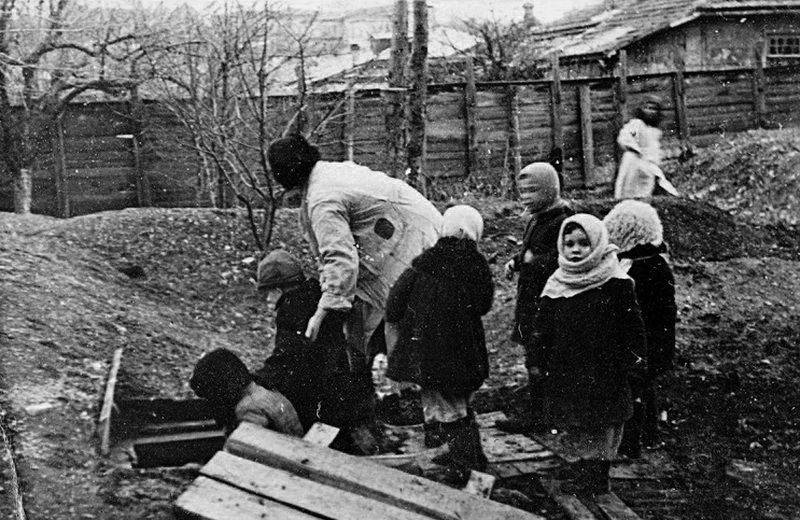 This short, modest woman is named Lidiya Illarionovna Emelyanova (the maiden name of Vengerov). Brown eyes, smoothly combed black, with gray hair, a close look. She is a wonderful mother, and an excellent hostess. And now, responding to the jubilee congratulations of relatives and friends, can not overcome emotional excitement. After all, after all, 75 years lived.

I remember the harsh years of the war, when she 6-year-old girl was already herding geese, helped her mother around the house. Often she could be seen on a collective farm poultry farm, where Lida was also the first assistant to the old poultry farmers, for which she sometimes received several eggs from them for her work. Father died at the front. There were five young children in the Vengerov family. To survive, it was necessary for everyone to work.

“Mom, left a widow, cried day and night, could not come to terms with so much grief,” Lydia Illarionovna says with tears in her eyes. - There was nothing to eat, fed us, five children, soup from quinoa. I still can’t believe that we were able to survive in that incredibly difficult time.

The girl did not have to go to school. After the long-awaited Victory, it was necessary to restore the economy destroyed by the war. And young Lida together with adults worked in the field from dawn to dusk. She took the grain from the combines to the current on the oxen, picked up the spikelets. And when she was a little older she took care of the calves.

Lydia Illarionovna didn’t forget that distant 1949 year, when, together with her older brother George, she came from the Millerovo district to the first branch of the Tselinsky state farm to visit her aunt. I thought to stay for a while, and I stayed here forever. For many years she worked as a pigman, a cook, a laborer, she treated any business with good faith, with a soul.

Lydia Illarionovna's husband was also caught from hardworking people. Nikolai Vladimirovich Emelyanov, despite his disability since childhood, was known as a first-class shoemaker in the whole district.

“We have had all kinds of things,” recalls Lidia Illarionovna. - But we lived together. We tried to forgive each other insults.

Spouses Emelyanovs not only worked diligently, but also raised children well. The eldest daughter Lyudmila, having married Oleg Kipshar, lived in Salsk with his parents for several decades. And now, living in Rostov, she maintains the closest relations with them. Mother-in-law and father-in-law for her are a worthy example. Under their supervision grew her daughter Helen. Grandmother and grandfather gave her all their love and affection, they always took care of her. And the granddaughter grew hardworking and kind.

Soon, death took Lydia Illarionovna husband. And she was left completely alone. But children and grandchildren do not forget about it. They often visit her, help in everything. The daughter and son created all the amenities for the mother in the house so that she could live comfortably, like in the city.

Although at one time Lydia Illarionovna was unable to attend school because of family difficulties during the Great Patriotic War, she always remembered the well-known saying that learning was light ... And because she tried to learn her children, "bring them to people." Daughter Lyudmila Nikolaevna Kipshara is now working as deputy chairman of the Rostov regional consumer union, and her son Valery Nikolaevich Emelyanov is the chief engineer of OAO Yuzhtruboprovodstroyproekt. Mother is proud of her children.

The children absorbed the science of the maternal heart, the warmth of her hands, they learned hard work from her, reaching considerable heights in life. In her difficult youth she had to be content with the smallest, to undergo severe tests.

During my many years of journalistic activities, I often had to tell in the press about many families, sometimes also dysfunctional ones, where the unwritten obligations of children to their old parents who need help are not fulfilled. But the Emelyanov family, which I have just told the readers, could have just served as a good example for others.

It is from such people as Lydia Illarionovna that the young people learn kindness and worldly wisdom from a living example.

Ctrl Enter
Noticed a mistake Highlight text and press. Ctrl + Enter
We are
The war is still a woman's face, or the life of farm girls from the Upper DonFather told
5 comments
Ad