Maidan in Montenegro ... and silence 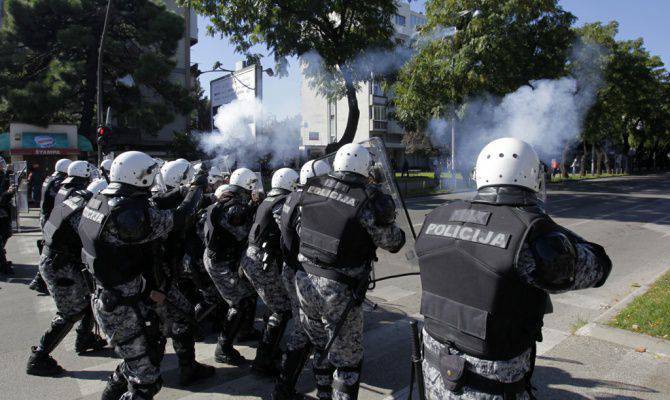 Indeed, strange things are happening in Europe. Almost in its very center, in Montenegro, Maidan was drawn, and everyone is silent. No cries for freedom and democracy, no cookies ... Why is this so?

Maybe because Montenegrins rebelled against the country's entry into NATO and anti-Russian sanctions?

But really rebelled. Indeed, they are small, but proud and independent.

How did it all start? It all started quietly and modestly.

On September 17, the Parliament of Montenegro adopted a resolution on supporting NATO integration, which was supported by 50 of 79 deputies. 26 people opposed (Democratic Front, Demos, Socialist People’s Party and independent candidates), three abstained. At the same time, one of the leaders of the Democratic Front, Milan Knezhevich, initiated the creation of the “Union of anti-NATO forces of Montenegro” as a broad socio-political and civil coalition.

September 27 in Podgorica in front of the parliament began a termless protest rally, initiated by the Democratic Front. The protesters demanded the resignation of Prime Minister Milo Djukanovic, the formation of a transitional government and the holding of free democratic elections. On the eighth day of protest, Metropolitan of Montenegrin and Primorsky of the Serbian Orthodox Church Amphilochius made a speech in front of the audience. At the moment, the protests are continuously continuing the eighteenth day.

October 12, one of the leaders of the Democratic Front, Andria Mandic, sent an open letter to the 28 ambassadors of NATO member countries in which he stated that “Montenegro’s entry into NATO, conducted by the illegitimate Djukanovic government, cannot be recognized as legitimate and legitimate, since the majority of the country's citizens are against joining NATO and this decision will never recognize. "

On October 14, an unprecedented NATO delegation headed by Secretary General Stoltenberg and the ambassadors of the alliance member countries 28 arrived in Montenegro.

Montenegrins responded this Maidan and a call for Russia.

October 17 near the Parliament of Montenegro began a protest rally. The police demolished the campground of the protesters. And it began in an adult way.

The demonstration was attended by several hundred activists. One of their main demands was the resignation of the president. Protesters tried all possible and impossible ways to get into the parliament building. To get there, you had to go through the police cordon. The "requests" of the security forces to stop the rally, the demonstrators did not respond at all, so the law enforcement agencies had to use tear gas against them.

Then the assault began, inflaming in no way inferior to Kharkov or Donetsk. As a result, six police officers were injured. They were injured and were taken to hospital for help. Police managed to detain 11 protesters who are actively opposing the current government in the country.

Also, two active members of parliament from the Democratic Front were detained. 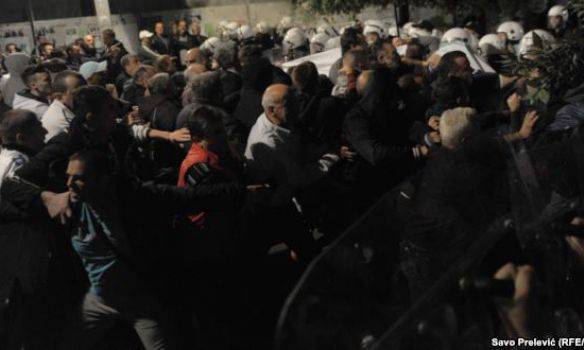 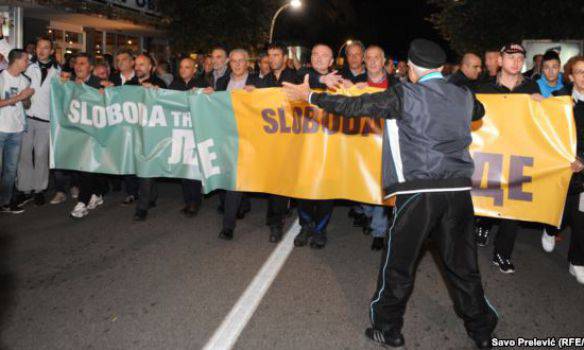 And all over the world - peace and quiet. Why does Nuland not hurry in Podgorica? The capital, in no way inferior to Kiev, except in size. Where are hundreds of journalists from all over the world telling how the police trample on the democratic aspirations of Montenegrin citizens? Why the OSCE does not express concern in connection with the arrest of the current deputies?

Yes, there you have European democracy.

Not go there express aspirations. Now, if against Russia - yes, in Podgorica, it would have been impossible to breathe from the Westernizers. And so ... they'll figure it out for themselves. The main thing - the deputies voted for joining NATO, and the rest - little things.

But the Montenegrins do not think so. If you look at the photo, then in the ranks of the demonstrators are not rabid youngsters who dream of Europe, like in Ukraine, but quite adults who understand what and how. Note.

Open confrontation, by the way, brought its results. BBC "noticed" was a report. And now the United States declared that they would give consent to the admission of Montenegro to NATO only if the leadership of Montenegro continues the course of reforms and tries to increase public support for the country's membership in NATO.

Despite the fact that the police and the authorities wanted “quietly”, it did not work out. But this only says that "there will be more blood." And undoubtedly, the continuation of the protest stories.

With all my heart I wish the Montenegrins victory in this difficult task. All of them are against NATO, but perhaps Russia is behind them.

We are in Yandex Zen
Montenegro took to the streets. The population against the country's entry into NATO
Armored vehicles of Yugoslavia. Part of 3. Yugoslav People's Army (1945-1980's)
76 comments
Information
Dear reader, to leave comments on the publication, you must to register.