Why "Boeing" Ukrainians shot down 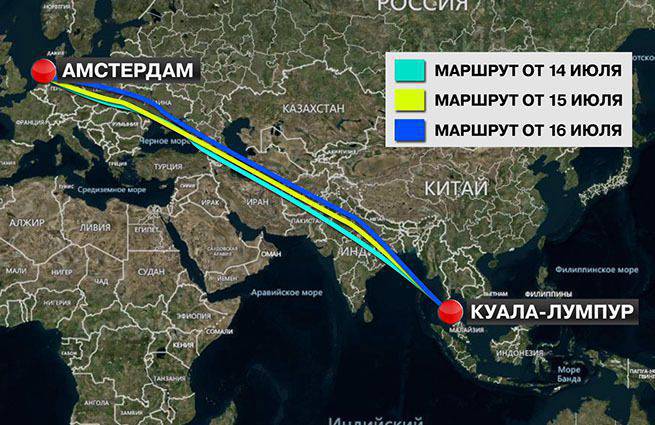 The question is quite interesting. Over the past year in the network appeared a lot of materials on this disaster. Endless photos, maps, schemes, comments. Disputes, discussions, smoothly turning into a friendly scuffle. Technical discussions on air defense related to this topic may well replace the corresponding theoretical course of a military higher educational institution.

However, disputes of this kind can last forever. There are no normal sources, everyone has different views and experiences. We will try to enter the target from another azimuth. Let us imagine a situation that everything was exactly as the Western media say: the militia shot down the plane.

Imagine a reasonable reaction of the Kiev authorities to this extraordinary event. First of all, you must withdraw suspicions from yourself. As they say, honest people do not wake up from every rustle. So, it is necessary to ensure maximum informational transparency of the actions of the Air Force and Air Defense of Ukraine at the time of the destruction of the Boeing.

Provide complete information on the deployment of Bukov, on the actions of combat aircraft, provide information on air-to-air and ground-to-air missiles. These rockets are few, they are expensive and numbered.

And so that everything grow together, the truth must be told all from the very beginning. Otherwise, nothing will burn out. War, speak? But at that moment the Ukrainian Air Force had already been beaten out by the militias, and the air defenses were inactive. They are useless against the Russian Air Force. It was necessary to give full access to any necessary information. Why not? There is nothing to hide.

It was necessary to submit to the press air traffic controllers. Immediately. The ones that led the Boeing. What are the secrets of honest people?

What would it give? It changed everything! Guilt with the APU was filmed immediately and completely, and the menacing pointing finger of general anger would be oriented towards the Kremlin. Sorry, but the cries and shouts of "and we said" do not mean anything.

The Ukrainian authorities immediately hid the dispatchers, pilots, Buki ... She hid everything. And she began to blame Russia loudly. Sorry, but if you are not to blame for the accident, do not hide from the accident scene.

Yes, all this information that I have listed usually constitutes a state secret. But here is a special case. The timely provision of this information, and this could easily be done, removed from Ukraine any guilt in the incident. Ukrainians, of course, will say that everything is clear, Putin shot down. No, everything is not clear. In this case, the word can not be trusted, the stakes are too high.

And in this case, I do not believe Putin for the word, I do not trust those who actively swept up their tracks, shelling the crash site. Honest people somehow do not need to do. Let the Dutch, the Malaysians, the Russians and anyone else look.

You know, the “Boeing’s political rally” reminds me of buying a Ferrari on credit from a representative of office plankton. Not with us, of course (with our interest), but somewhere in Switzerland. But all one - a person can pay, pay, pay. But he will not be able to pay - the loan amount is too large. But beautiful girls - all of it, definitely. So with the “innocently killed Boeing” - you can blame, accuse and once again accuse Russia, promising “clear and irrefutable evidence”. But it will never work out.

There is no evidence. If they were, they would be presented immediately upon detection. But alas, they are not. Therefore, Western politicians worked "on credit" - they loudly blamed Russia, promising the results of an "independent and objective investigation." These results are not, and will not. Never. Unless, of course, such a result is considered a bold conclusion: “the plane was shot down by a rocket”. That is, people have been digging land for more than a year, spending budget money, and this is the result.

In general, all this "investigation" looks rather strange, if not to say - stupid. Imagine the situation: there were two people at the crime scene - Mr. X and Mr. Y. What does the logic tell us? Logic tells us that the criminal is either Mr. X or Mr. Y. If it is too difficult, I can repeat it. That is, if the accusation is completely removed from Mr. X, it means that all questions to Mr. Y. If for some reason Mr. Y is innocent, it means that Mr. X is guilty. It's simple!

In the Boeing epic, there were only two possible perpetrators - either Russia or Ukraine. The Buk complex is not a tank or an artillery gun, everything is much more complicated. Accidental militiamen would never have been able to adequately control such a system. So Ukraine or Russia? It's very simple, if one of the two proves that it is clean, then all the questions to the second. It happens in detectives, in life it is usually more difficult. But the Dutch investigators were lucky: neither the Turks, nor the Americans, nor the Romanians (even the Romanians!) Could not make a hand here.

And honest Ukrainians are very lucky: if they prove their innocence and innocence, then all further questions will be addressed to V.V. Putin He really gets into a very, very unpleasant situation. Russia is an outcast and so on. Sweet revenge of a little Ukrainian, a totalitarian Asian monster. You see, any detective lover will easily confirm this to you - in such a case, you need to ensure maximum openness and accessibility. This is the worst blow to your opponent. He, being unclean, is forced to hide and hide evidence.

In short, the classic detective genre. The killer is the butler. But the Ukrainians did not look for easy ways, on the contrary, they classified everything that was possible. But honest people do not behave this way. Further, professional Dutch investigators "on the word" believe the Ukrainians and categorically do not believe the Russians, before the start of the investigation itself. That is, representatives of Ukraine (democratic, civilized state) are actively involved in the investigation, and Russian specialists are not allowed to come near him for a cannon shot. As I said, the killer is the butler. 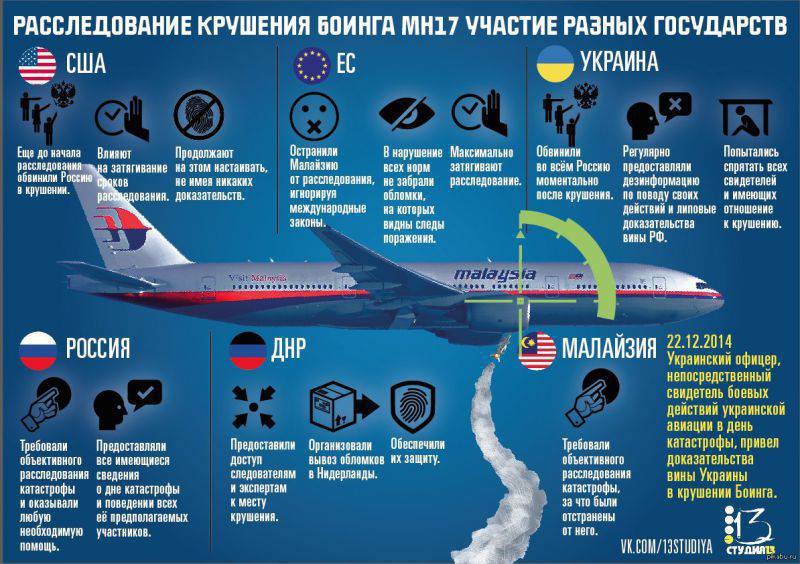 A year has passed. Sounded loud accusations. Dust settled. Journalist provocations about the suddenly seen results died down. And silence. And the dead are the Dutch along the road.

Yes, there is a “hanging” when a Makarov pistol was used, of which there are hundreds of thousands. Go find it. Here the situation is fundamentally different. There are not so many missiles for Beeches, as well as Beeches themselves. Individuals and even large official figures do not own them. It’s just impossible to find a random rocket on the side, it’s impossible to cut it in the garage too. All rockets have numbers, all counted. A sudden and complete verification of the air defense of Ukraine would remove all questions to it. But Ukraine did not publicly do such things.

Sorry, but one simple conclusion follows from the above: the plane of the Malaysian airlines was shot down by the Ukrainian Armed Forces. All other options (they are essentially one) fall off.

Well, it does not happen that Vova is to blame, and his opponent Peter convulsively hides evidence. What for? In this case, Putin may be the standard of the dictator and the Doctor Evil in one person, but this does not prove anything. Rockets, reconciliation of numbers, points of deployment.

Therefore, from my point of view, all further “investigations” and “search for evidence” have no sense. The guys from Almaz-Antey with their “parallel investigation” are very welcome here. Their task is not to reveal who was to blame, but to parry the dagger attacks of the Dutch.

I agree that what I am writing is quite elementary, but everyone is somehow addicted to “conspiracy theories”, they start to study “Hubble images”, draw possible trajectories, study damage to the Boeing body. Why is this all about? Why all these “jumps and grips”?

It begins to resemble the Kennedy assassination. Everyone in the course (except for American inhabitants), for which he was killed. But there are more and more new versions. New evidence. Although from the very beginning it was known that the US government structures were involved in this.

So with Boeing. Millions are interested. Hundreds of millions. They (abroad) are wondering - when is Putin caught red-handed? But in Russia there are no less “investigators”. Almaz-Antey great, professionals. But I would go further in their place: I would create an English-language forum with sub-topics. I would have a hot, round-the-clock debate there. Constantly, bit by bit would give out new information, fried facts. Do the Dutch want to cooperate with us and keep everything secret? No problem. We will have our own forum "with blackjack and corrupt fraulein." Drag the audience over.

It would be possible to create a shareware program for independent calculations of Boeing and rocket trajectories. A kind of crowdfunding. Help solve the crime! And hundreds of millions of juzverej download it from the site Almaz-Anthea, install. At night the system blocks are buzzing ... They are looking for. In short, connect to the search for the entire planet. So that on each monitor was the icon of the downed Boeing. We have nothing to hide! That the Dutch authorities are hiding something ...

Of course, all this sounds cynical, but organizing a political show against the backdrop of a human tragedy is even more cynical. Guilty could be installed in the first week after the disaster. Absolutely accurate and without options. NATO had full access to all information inside Ukraine. And full control. So the fact of “classifying” irrefutably indicates the fault of the Ukrainian Armed Forces.

This is indirectly confirmed by the fact that in the published report, in fact, part of the blame is placed on Ukraine, which did not close the airspace above the conflict zone. And the swift, but unsuccessful attempt of the Dutch to reach Lavrov immediately after the publication of the report. For the Dutch government, it is time to pay on a political loan.

17 July 2014 was shot down by Boeing, and by July 18 the European Investment Bank, on the recommendation of the European Council, stopped new funding for new projects in Russia. How it all matched. Or did not match? Or is it just points of one plan? A kind of "attack on the radio station in Gleijvice"? Or "arson of the Reichstag by the Communists"?

In the West, they like to talk about the democracy of their system of government. In principle, to some extent it is. But it is necessary to mention the skillful manipulation of public opinion. True, for this sometimes you have to sacrifice something or someone.

The man in the street had to explain why these sanctions were so necessary. He (the western man in the street) is lazy, cowardly, covetous and tolerant. And then suddenly Putin knocks down a Boeing, and the anti-Putin investigation begins. But sanctions are imposed immediately.

By the way, if someone does not know, the Germans had a complete fail on the radio station in Gleijwitz - the broadcast to a wide radio listener did not take place. God is not Mitroshka, sees a little.