October 19 2015
26
What Rudyard Kipling called the “Big Game” is unfolding today in front of us at two sites: the Ukrainian and the Syrian. Both the “Ukrainian” and “Syrian” crises arose after the intervention of the United States with its “democracy of chaos” in these regions. Behind the whole of American "democracy" in the world lies the banal goal of the "Big Game": to change the political regimes in the regions to anti-Russian ones. The rest of the "democracy" of the US State Department is not interested. 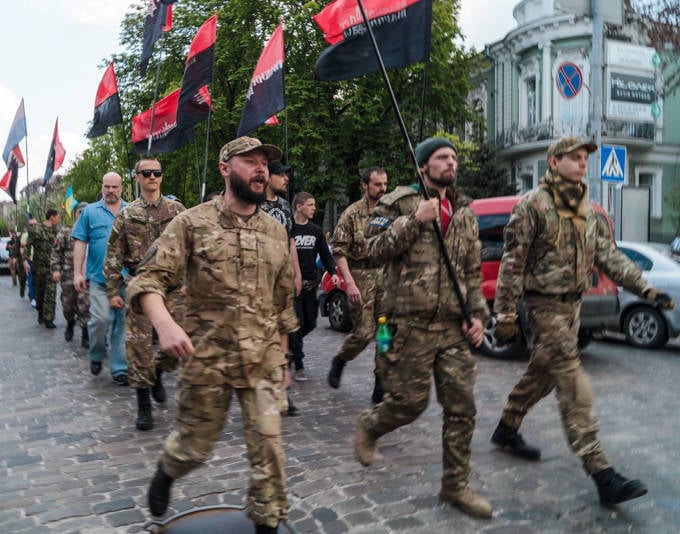 On one site, Washington openly manipulates Maidan, on the other, with ISIS, allegedly “fighting” with it, but who, whatever they say, armed themselves with American weapons, "Accidentally" captured in warehouses in Mosul (Iraq). Before the announcement of ISIS, these terrorists were supported by the US openly, as fighters for democracy in Syria, as recalled by the General of the Russian General Staff Antonov.

These are metamorphoses of “donkeys of democracy” or a special operation of the CIA - let everyone decide to the best of their gullibility. (In addition, the “caliph” of ISIL, Al-Baghdadi, and his comrades were in American prisons, but were released on time: an unexpected opportunity presented itself as an exchange of prisoners. ISIL is just a copy of Al-Qaida.)

However, the Maidan in Ukraine was stopped by Moscow in the Crimea and in the Donbass, and through joint efforts of Minsk and Berlin and Paris today is “frozen”. The truce in the Donbas has become a fact, and it becomes, therefore, a political factor in Ukraine. Thanks to the military support of the Russian Aerospace Forces and the Iranian Armed Forces of the legitimate government of Syria, Bashar al-Assad, ISIS in Syria is defeated, and squeezed out from where it came from - to Mosul (Iraq). That is, the conflict in Syria will also “freeze” in the perspective of three to four months, according to the Russian General Staff.

This is what the Washington player can do in such a situation to continue the pressure on Russia? Throw firewood in the dying fires of "managed democracy." Namely, to continue the development of "democracy" in these regions by inciting / continuing color revolutions.

Recall that Washington has already tried to arrange a “color revolution” in Turkey against Erdogan, and still maintains his best enemy theologian Gülen in Wisconsin, who managed to create a “parallel government” in Turkey. Then the charismatic Erdogan resisted, but the bell rang for him.

A few days ago, the Guardian reported that in Saudi Arabia against Prince Salman Al Saud, the de facto head of state, the Arabian Maidan is being prepared by local pro-American princes. They cannot forgive him the "hajj" to Vladimir Putin in Sochi, as well as disagreements on some theological issues with the US State Department. “Moscow and Riyadh confirmed the common goals for Syria,” said Sergey Lavrov after the meeting in Sochi. Such theology causes terrible allergies in the State Department.

And it so happened that ISIS also awakened a brutal appetite for Saudi Arabia, again, due to disagreements solely on theological issues.

In Saudi Arabia, the attacks became more frequent, the ISIL militants shot people already in mosques (!), Recently the media reported on the murder of five believers, and ISIL demonstratively takes responsibility for the killings. The situation is complicated by the fact that the CA is already fighting in Yemen, and Turkey is fighting the guerrilla movement of the Kurdistan Workers' Party, so ISIL can, at its discretion, open "second fronts". It looks like the “Arabian Spring” and / or “Turkish Spring” is on the way ... The “colored” bonfires in the Middle East may flare up with a new force! And the region will explode with the help of LIH.

Saudi Arabia may well repeat the fate of Iraq, there is also very little democracy, and a lot of oil. Especially when you consider that the backbone of ISIS is made up of officers of the army of Saddam Hussein, who have a huge grudge against the Saudi princes for their support of the American invasion of Iraq, and, probably, they are eager for revenge. In geopolitics, this is called the "domino effect", but in the people - do not dig a hole to your neighbor!

If ISIS, with the help of the fifth column of Maidan princes, captures the SA, then it will take possession not only of the enormous oil fields, but also of the Saudis' military arsenals, American, and very modern, such that they will be able to challenge the Israeli military machine. Then the apocalyptic page of the Middle East may begin. stories...

Turkey’s position is seen to be more durable, if only because it has no oil deposits. If only Erdogan does not do anything stupid for himself. November 1 in Turkey again elections, already marked by a major terrorist attack, the responsibility for which no one took over. The main suspect authorities announced LIH.

The “freezing” of the Ukrainian platform is also not in the interests of Washington, from the point of view of the “Big Game” in the geopolitical confrontation of Russia. Therefore, even a cute scandal with Yulia Marushevskaya, just a model, can become the straw that will turn Petro Poroshenko’s neck. "This is not that Yulia ..." - Poroshenko thought up a hoot, blessing her for the post of chief (!) Of Odessa customs. Right from the “harem” of Saakashvili. That Yulia, who is Tymoshenko, can, in response, say that Peter can arrange such a brothel at his chocolate factory, and he will answer for the brothel at the State Customs Office and to discredit the whole of Ukraine. In the October 25 election.

Igor Guzhva, editor of disgraced, relatively independent "Vesti", believes that Poroshenko is now trying to split the ranks of the Nazi-patriots, cleans the liberty "Freedom", and flirts with the "Right Sector". Perhaps this is so, but then God deprived Poroshenko of his mind for last. In fact, one of the three pillars of Euromaidan, its tribune face. And he already proclaimed, escorting his comrades for interrogation to the Prosecutor General’s Office: “This power survives the last days to its end.”

It is useless to flirt with the “Right Sector”, and it’s dangerous to attack him because he is under the umbrella of Ambassador Jeffrey Payette, and curated by the former head of the SBU-CIA Nalyvaychenko, who recently made threatening accusations of corruption against the presidential power. Poroshenko is simply trying to clear out those who can reach him with the help of the Prosecutor General’s Office. And he swung at the "Ukrainian holy": he accused Svobodovtsy Pyagnibok of the execution of Euromaidan. Revealed the terrible secret of the Nazi revolution!

This is a blow to the heart of Euromaidan, and the whole Ukrainian Svidomo! For far less sinning - just the postponement of the signing of the Euro-Association - Yanukovych was overthrown, and barely escaped his flight, thanks to Putin for that. What will the Nazi revolutionaries do with Poroshenko now?

Victoria Nuland herself, from across the ocean, collapsed with attacks allegedly against the Prosecutor General’s Office of Ukraine, that she was stuck up with corruption, and she needed to be urgently changed. And these are not empty words. Prosecutor General Viktor Shokin admitted that he was forced to live in safe houses, change traffic routes in order to continue to fight corruption. That is the power of corruption in Bandera Ukraine. The Prosecutor General is forced to save his life literally every day! ..

Ukrainian political analyst Rostislav Ishchenko said recently that, according to a hard scenario, Poroshenko "may have his neck turned in a few weeks." Judging by his behavior, and Prosecutor General Shokin, they finally decided to take a walk with Saakashvili's “models” and take revenge for something to Pyagnybok. The Washington Player is likely to choose a tough scenario, because then the new Ukrainian Nazi revolution will burn more brightly.

Ctrl Enter
Noticed a mistake Highlight text and press. Ctrl + Enter
We are
Results of the week. "And your American music is shit"Turkey: fighters for democracy came together
26 comments
Information
Dear reader, to leave comments on the publication, you must to register.