Two people with orders of Glory on the chest 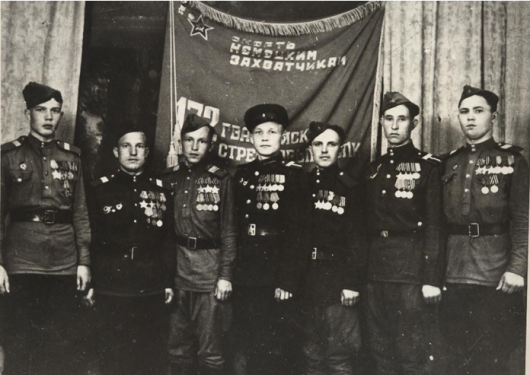 November 8 marks 72 from the day the Order of Glory was established. The Order of Glory 1, 2, 3 degrees was established on November 8 of the year 1943 to reward the rank-and-file sergeants of the Soviet Army, and aviation - junior lieutenants who showed heroism, courage and courage in the battles for the homeland. By that time, the Armed Forces of the USSR had come a long way from the banks of the Volga to the Dnieper. Soviet soldiers amazed the world with massive heroism. Thousands of soldiers who wholeheartedly loved their homeland showed military valor, courage, courage, defending their homeland, were awarded the Order of Glory. More than two thousand people became full holders of this honorable order, having performed a feat three times. Among these heroes, my two fellow countrymen Panteleimon Ivanovich Demin and Vasily Romanovich Anistratov are full gentlemen of the Order of Glory. Unfortunately, the heroes are no longer with us, but the memory of them should be preserved for a long time.

In February, 1943, the battle path of the farm boy Panteleimon Dyomin, who had not been nineteen years old, began. His soul was filled with hatred for the invaders, from which his native Verkhnedonsky region had recently been liberated. The guy rushed to the front, and in March he, a sapper of the 172-th Guards Rifle Regiment of the 57-th Infantry Division, was baptized in combat.

Guard Private Dyomin surprised his comrades with extraordinary fearlessness and courage. Already in December 1943 of the year, the deminer Demin accomplished his first feat. During the fighting east of the village of Loshkaryovka in the Dnipropetrovsk region, together with his comrades, they took off more than three hundred enemy mines, made six passes in wire obstacles, set about one and a half thousand minutes in front of our front edge. For courage and courage in battle, in February 1944, the young fighter received the Order of Glory of the third degree.

Forty-fourth year turned out to be rich in rewards for a brave sapper: in August he was awarded the Glory of the second degree. And many years later, Panteleimon Ivanovich remembered in great detail that hard battle when crossing the Polish Vistula River. Then, Sergeant Dyomin, the commander of the demining squad, guards the guard and sent the regimental soldiers to the opposite bank on the boat under the artillery bombardment and air bombardment until late at night, making 30 dangerous flights. And even if he miraculously survived after a shell hit his boat, he received medical assistance and continued transporting soldiers, ammunition and food. 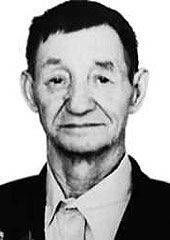 The enemy was successfully knocked out of the coastal line of trenches, but there were mine fields and wire obstacles ahead ... For the rest of the night, Demin’s demining squad made aisles in them, thanks to which our soldiers could gain a foothold in the bridgehead, which played an important role in the further advance of the division. Our fearless hero met the victory in the capital of the defeated Reich, in the last days of the war, having managed to accomplish his third feat. In the street fights in Berlin 16 on April 1945, Demin and his squad made six passes in the enemy’s fences, disarmed 70 mines. On April 24, the sappers blew up the 2 bunker and made several passes in anti-tank barricades.

Sergeant Demin was awarded the Order of Glory of the first degree for his heroic participation in the Berlin Battle of the Guard. The full holder of the Order of Glory was demobilized in 1947, he returned to his native land, where he started a family, raised children and worked in agricultural production at the Migulinsky and Meshkovsky state farms, was the chairman of the Meshkovsky village council and a deputy. Panteleimon Ivanovich Dyomin earned the respect and good memory of his fellow countrymen for his glorious military and peaceful deeds. 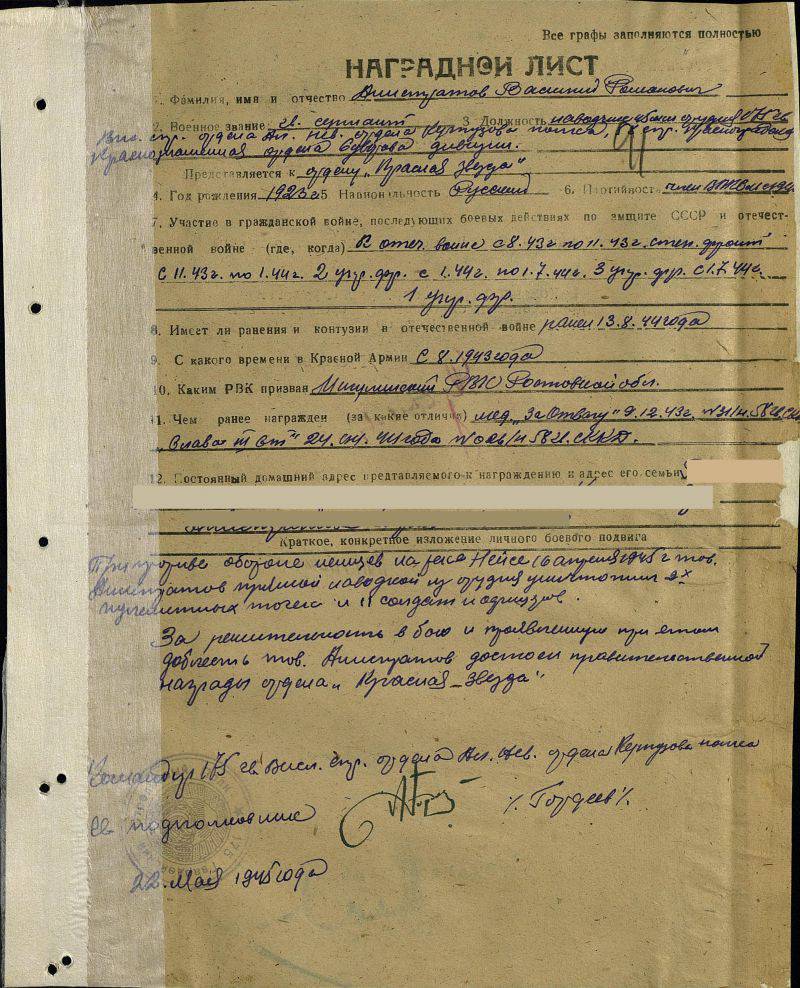 How many of them, modest, simple, not at all heroic guys, became heroes when trouble came to their native land. They did not think about rewards, but simply, overcoming natural fear, went into battle and, not hiding behind their comrades, honestly fought. Once in a conversation with the correspondent of the regional newspaper “Molot” A. Gritsenko, the holder of three orders of Glory, Vasily Romanovich Anistratov, shared his memories of the war, said: “In the first battle I was wounded in the back. In the field hospital a shard was dragged out. I lay there for two days and ran away. That was a fool, ran away from the hospital! Others sought to go there. I found my part. And in the hospital they rushed - there is no man. And they sent home a letter supposedly went missing. Then the whole история was - and there I am, and like I do not. And the rewards were afterwards. They came by themselves. I did not try to earn them. When caught up with his regiment, he was near the Dnieper. The foreman took me to ship to the right bank, to the bridgehead, groceries. So I did not return back. There, in the gun design of the forty-fi gun, soldiers died. I replaced them. So I became an artilleryman. ”

They called Vasily Anistratov into the army, who was born in the now defunct village of Popov in the Migulinsky district 5 in November 1923 of the year, like his peers, in the beginning of 1943. He fought as part of the 175 artillery regiment of the 58 Guards Division on the Steppe Front, on the third Ukrainian. In the battle guns, at first he was a podnoschik shells, loader, gunner, by the end of the war - the commander of the gun. Vasily bravely fought, death itself was afraid of him, bypassed even when enemy shells smashed a forty-five, and his comrades died. The first award to the brave soldier at the end of 1943 of the year was the medal "For Courage", which he received for crossing the Dnieper and taking the height near Kharkov.

Difficult roads of war led Vasily Anistratov to the west. Soon the Soviet Army crossed the border of the USSR. In the battles for the liberation of the European countries enslaved by Hitler, Vasily and his comrades mercilessly beat the desperately resisting fascists. They were beaten for their dead friends, for their fathers, mothers, for their homeland, paving the way for a long-awaited victory. For the liberation of Poland, the valiant warrior-artilleryman Anistratov was awarded the Order of Glory of the third degree in 1944, and in September of the same year he received the Order of Glory of the Second Degree for crossing the Oder.

“When the Germans broke through the Neis 6 in April of 1945, Comrade Anistratov destroyed two machine gun points and 11 soldiers and officers with direct fire from a cannon,” says the award list from the data bank “Feat of the People.”

Vasily Anistratov won his third Order of Glory (first degree) at the very end of the war in the battle for the liberation of the capital of Czechoslovakia Prague.

He became a full gentleman of the soldier's order. “While working as a gunner, Comrade Anistratov proved himself a courageous and courageous fighter. On August 10, 1944, in the battles in the vicinity of the village of Datos of the Glino-Patzan County of the Nenets Voivodeship (Poland), the enemy three times launched a counterattack with superior infantry forces and tanks. The gunner, Comrade Anistratov, shot at point blank range the Germans, seizing on our battle formations. In the same battle, Comrade Anistratov destroyed three enemy firing points, three observation posts and more than 30 enemy soldiers and officers, ”the order of the 58th Guards Rifle Division of the Krasnograd Red Banner says.

And the winning salute for Vasily Romanovich Anistratov and his comrades in arms sounded in Austria, from where in May 1945, he went home.

In peacetime, a former soldier worked as valiantly as he fought. He completed courses for tractor drivers at Meshkovskaya MTS, where he worked until 1958. And then he moved to the Krasnoarmeysky branch of the Melovatsky farm feed farm. Executive initiative worker Vasily Romanovich was always among the foremost production. For labor achievements in 1966, he was awarded the Order of the Red Banner of Labor. And here the warrior-order bearer did not shame his honor. Vasily Romanovich Anistratov passed away in 1999 year.

Ctrl Enter
Noticed oshЫbku Highlight text and press. Ctrl + Enter
We are
Military orders and medals of the Soviet Union. Order of GloryC George on the chest. Cavaliers of the Order of St. George on the fronts of the First World War
9 comments
Information
Dear reader, to leave comments on the publication, you must to register.