October 20 2015
205
In the evening of October 15. 2015, a monument to the Soviet Army in the Bulgarian capital Sofia, suffered another outrage. Only this time the Bulgarians had nothing to do with it. With the money of American NGOs, Nadezhda Tolokonnikova arrived in Sofia. Under the control of 54-year-old American director Kevin Bout, Tolokonnikova’s friends put colorful balaclavas on the heads of five bronze Soviet soldiers on a bas-relief at the base of the pedestal. Then Nadia Obokno, as she is known in queer, gender and LGBG circles, enthusiastically recited a text prepared by American documentalists in front of the cameras, mocking the memory of Soviet soldiers. 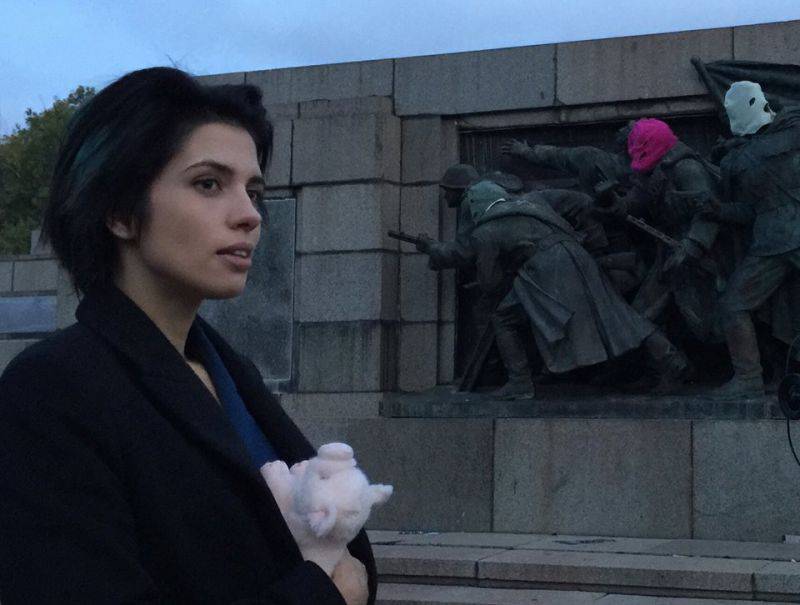 Nadezhda Tolokonnikova recites the text prepared by the Americans against the background of the cursed monument to the Soviet Army in the Bulgarian capital Sofia. 15 October 2015

Nadezhda Andreyevna Tolokonnikova was born on November 7 1989 in Norilsk. She was an excellent student at school, graduated from music school in piano. In 2007, she moved to Moscow, entered the Faculty of Philosophy of Moscow State University. Soon, she joined the anarcho-punk art group "War". 29 February 2008 of Tolokonnikov, being on the ninth month of pregnancy, engaged in group sex in one of the halls of the Moscow Biological Museum named after KA Timiryazev (in front of the cameras of journalists).

10 December 2011. This Nadia Oholokno spoke on behalf of the feminist and LGBT community from the rally scene on Bolotnaya Square. 21 February 2012 together with four other members of the Pussy Riot group Tolokonnikova participated in the so-called punk prayer service in the Cathedral of Christ the Savior, and 3 March was arrested on suspicion of hooliganism. 17 August 2012. The Khamovnichesky Court found Tolokonnikov guilty of “gross violation of public order, expressing obvious disrespect for a society based on religious hatred and hostility” and sentenced her to two years in prison in a general regime colony. The human rights organization Amnesty International (Amnesty International) immediately recognized all members of the Pussy Riot group as prisoners of conscience and called for their immediate release. Nadya Tolokno was liberated on December 23 2013 by an amnesty adopted by the State Duma for the 20 anniversary of the Russian constitution (as convicted under hooliganism). Tolokonnikova expressed her "gratitude" to the generous homeland a little later. 12 June 2015 she attempted to sew the Russian flag on Bolotnaya Square in Moscow, dressed in a prisoner uniform.

Nadya Tolokno made a good profit on the betrayal of Russia. In 2012, the authoritative American journal Foreign Policy (Foreign Policy) included it together with Ekaterina Samutsevich and Maria Alekhina in the number of 100 leading intellectuals of the world. The intellect of them is so rushing that only manage to shove it back in front of journalists' cameras in public places. In 2012, in the Russian version of the pornographic magazine Maxim, Madame Tolokonnikova took 21-e place in the 100 list of the sexiest women in Russia. This, so to speak, is an achievement already in the main profile. And in December 2012 of the year, the French newspaper Le Figaro chose Nadia Overnok as the woman of the year. Michelle Obama, the wife of the President of the United States, received only second place. The third took Meryl Streep. In March, Tolokonnikova 2013 took the 72-place in the 100 list of the most influential women of Russia, compiled annually by the Echo of Moscow radio station. And in January, 2014, the photograph of Tolokonnikova was placed on the cover of the newspaper The Times.

Purely human, we could sympathize with the psychopath (F65.2 code for the IBC-10 WHO, exhibitionism) and the shortage of Nadezhda Tolokonnikova. But it is impossible. We have no right. The Criminal Code of the Russian Federation has the chapter 25 “Crimes against public health and public morality”, Article 244 “Abuse of the bodies of the dead and places of their burial”:

1. Abuse of the bodies of the dead either destruction, damage or desecration of burial places, burials or cemetery buildings, intended for ceremonies in connection with the burial of the dead or their commemoration -
shall be punished with a fine of up to forty thousand rubles, or in the amount of the salary or other income of the convicted person for a period of up to three months, with compulsory work for up to three hundred and sixty hours, or correctional work for up to one year, or arrest for up to three months.
2. The same acts committed:
a) a group of persons a group of persons by prior agreement or by an organized group;
b) based on political, ideologicalracial, national or religious hate or enmity either based on hatred or enmity against any social group, as well as in relation to the sculptural, architectural structure dedicated to the fight against fascism or the victims of fascism, or burial sites of participants in the fight against fascism;
c) with the use of violence or with the threat of its use, -
is punished by restriction of freedom for up to three years, or by forced labor for up to five years, or by arrest for a term of three to six months, or deprivation of liberty for a term of up to five years.

How else can you qualify the acts of recidivist Tolokonnikova Nadezhda Andreevna?

Attempts to demolish and destroy the monument to the Soviet Army in Sofia have been going on since 1993. Bulgarian patriots have already protected 22 for the year and every day uphold the right to the existence of a monument to Soviet liberators. Every year on May 9 and September 9 (Day of the liberation of the country from the Nazis in 1944), Bulgarians lay wreaths and flowers at the monument. In the most difficult days, the brothers lived around the clock in tents near the monument and guarded him with a lively human chain from frantic fascists and Russophobes. And now - such a blow from behind!

It can not be denied that the monument has already become the object of vandalism several times. 18 June 2011. Unidentified persons repainted at night the statues of Red Army soldiers in the heroes of American comics: Superman, Joker, Santa Claus and the symbol of the network "McDonalds" clown Ronald Macdonald. 17 August 2012 on the heads of several bronze soldiers on the monument were put on multi-colored balaclavas - in support of the performance of the group "Pussy Riot" in Russia. Most likely, it was this moment that American director Kevin Booth wanted to re-create when Tolokonnikova recited the text prepared by him (or his co-workers) against the background of the insulted monument 15 in October 2015 in 21 in August 2013 the monument was painted pink, and it was written in Czech: “Bulharsko se omlouva !!!” (“Bulgaria is apologizing”) and “Prague 68”. 23 February 2014 was written on the monument “Glory to Ukraine” and spray painted the banner of Ukraine. But the Russians have never done this before. Especially since the thousands of kilometers that were specially flown by plane to make fun of the memory of their ancestors.

Bulgarian russophobes, which, unfortunately, are also found, are delighted. One of them writes: “The Russian girl freed us. When Bulgarians take action to protest against the Monument to the occupying Red Army, the Bulgarian police will arrest and hold them in tight handcuffed hands all night. Today on this very object a Russian action took place. True, the opposition, but still Russian. And what did the Bulgarian police do? Did not appear at all. This is after one day in a uniform aunt rushed with a stick alone against a crowd of more than a hundred people. Today, two guards retreated in front of a group of ten people. Sad but true. Again we will wait for the Russian liberators. This time - girls in balaclava.

The Bulgarian guards, of course, were not afraid of the size of the group. The Americans presented official certificates of journalists and said that there would be no harm to the monument. The guards had to leave. They will not beat journalists on the head with a stick. If anyone has a claim, let him present them in the manner prescribed by law. The guards did their little business - the names and identity of those present are known.

At the time, the USSR deprived unworthy persons of Soviet citizenship and expelled them for far less crimes. Under Comrade Stalin, Senior State Security Major Pavel Sudoplatov was in charge of working with a category of persons like Nadezhda Tolokonnikova. Those who have committed the desecration of the monument to the Soviet Army in Sofia must answer to the fullest extent of the law. At least, citizens of Russia, for whom the observance of its laws is obligatory not only in the territory of the state, but also beyond its borders. Otherwise, this precedent will undermine the twenty-year-old efforts of the Bulgarians to preserve the Russian historical heritage in Sofia and in general throughout Bulgaria. Russia cannot and has no right to take this spit in the face. If today it goes unpunished for Tolokonnikova and others like her, then tomorrow every liberal creature will stand in a queue, getting ready to spit on the memory of Soviet soldiers abroad, in pursuit of front-page American and French newspapers. 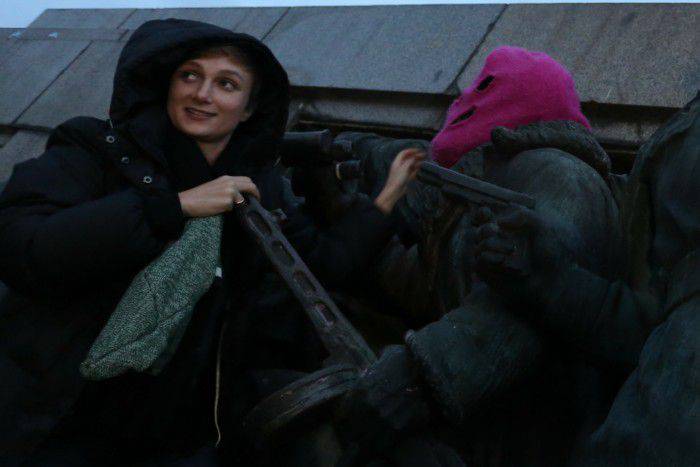 The smile of a traitor who earned dollars by defiling the memory of her ancestors. To the delight of customers and as an example to all Orthodox Slavs in Bulgaria

Americans just do not give dollars. We have to climb the pedestal

And yet the owners care about their minions. Americans take the most inaccessible places 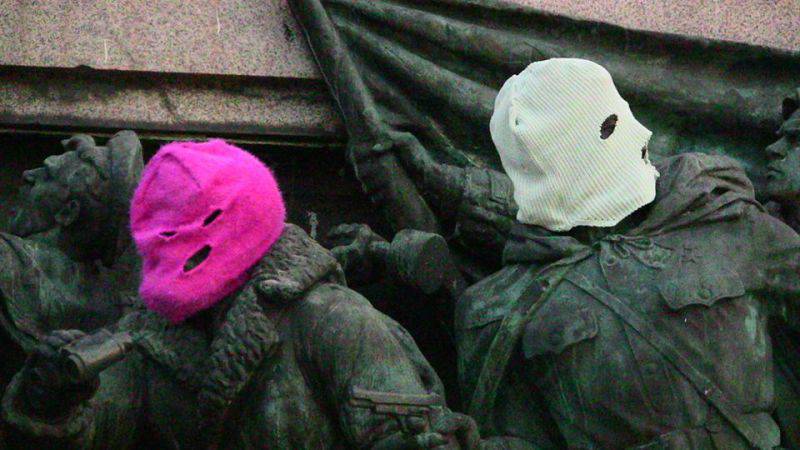 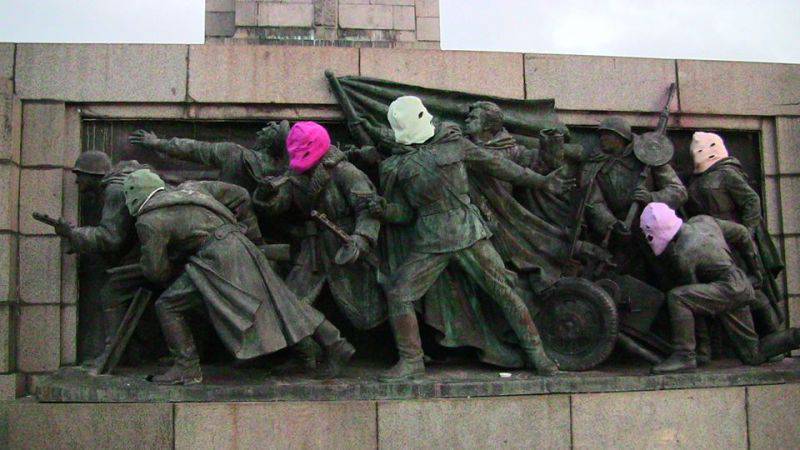 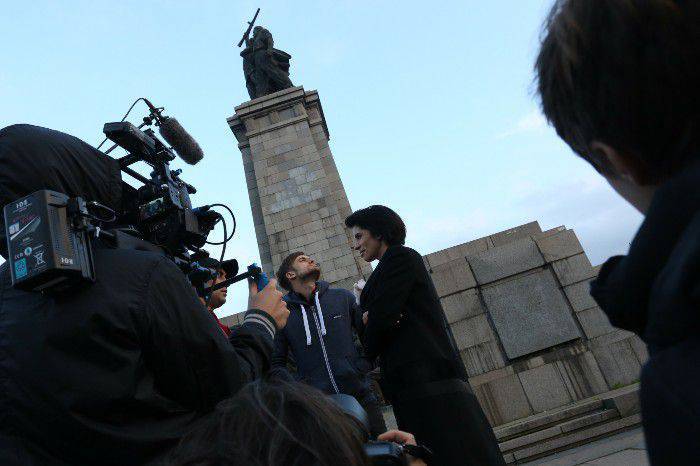 It is time to “expose” the USSR, and at the same time modern Russia and Putin. It's good that the Americans invented all the necessary “revelations”,
and do not "strain" the most 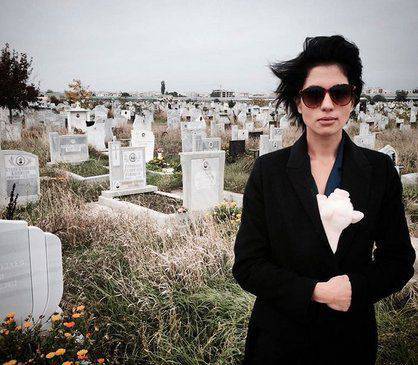 Nadezhda Tolokonnikova at the cemetery of the Bulgarian capital Sofia, October 15 2015 g. Unlike the Soviet soldiers, whose memory was outraged by Nadya Tolokno, she is very sorry for the war criminals and minions of the monarchist-fascist regime in Bulgaria executed under the decisions of the People’s Court (1944-1945). ) 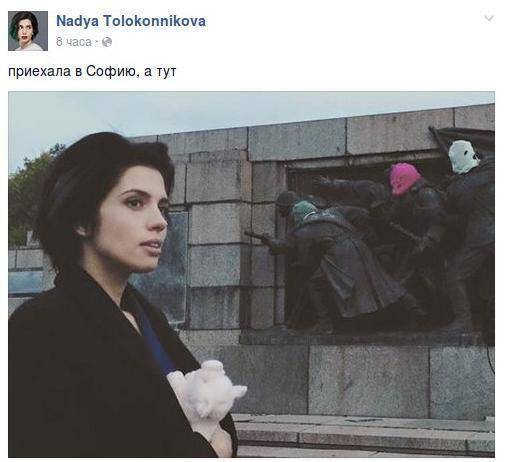 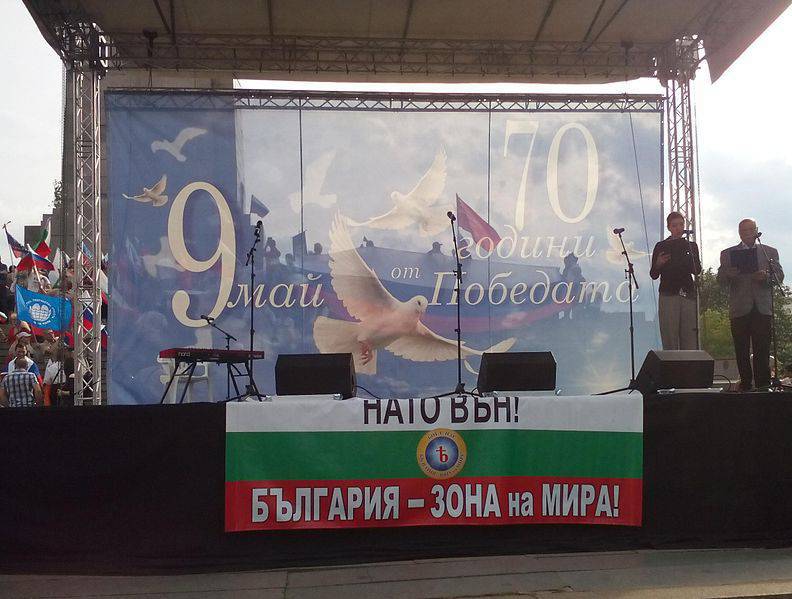 9 May 2015 g. Scene in front of the monument to the Soviet Army in Sofia. NATO is out! Bulgaria is a zone of peace! 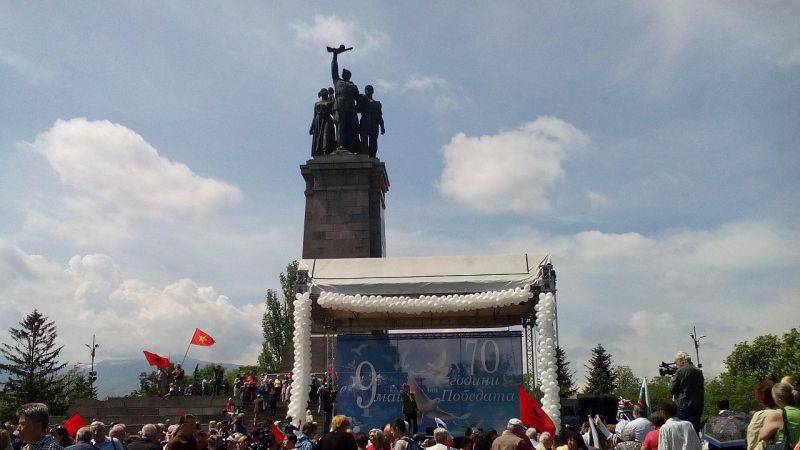 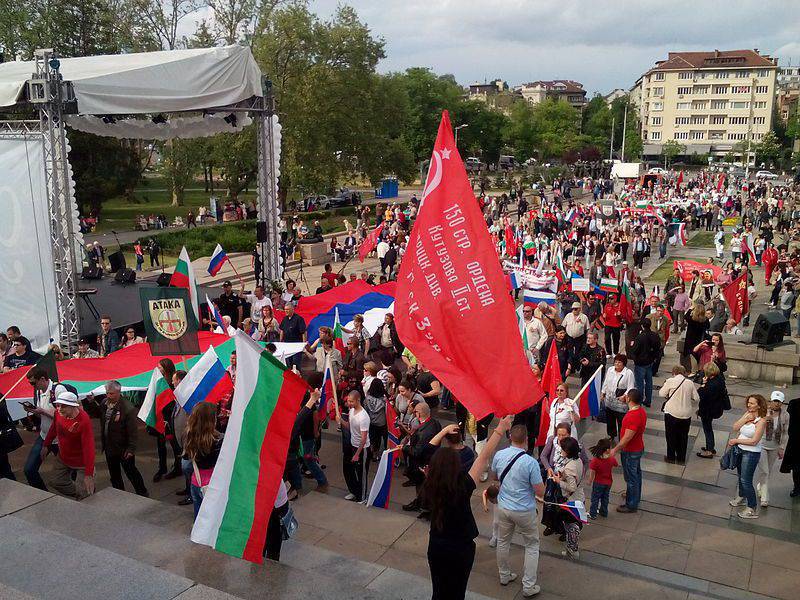 9 May 2015 g. The appreciative Bulgarians in front of the monument to the Soviet Army in Sofia 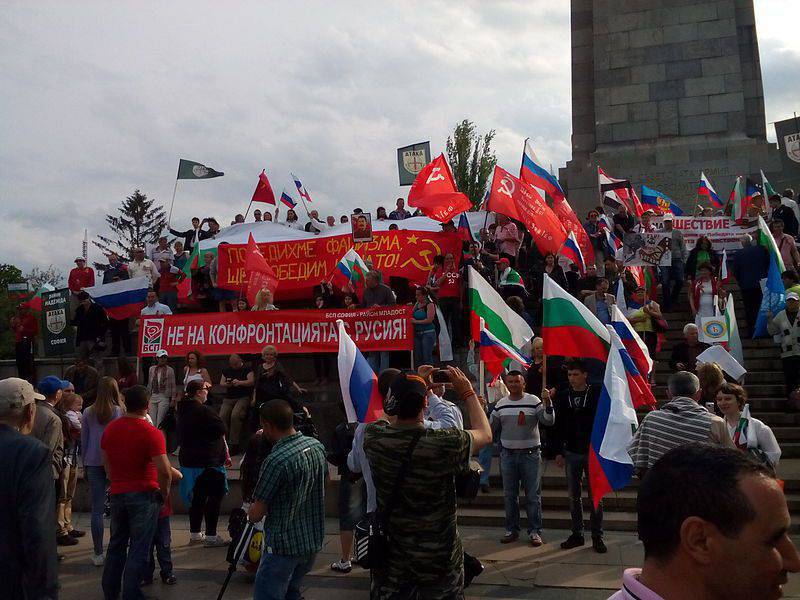 9 May 2015 d. Before pointing to a straw in the eyes of your neighbor
and shouting "Brothers betrayed!", it would be nice to remove the beam from your eyes

Ctrl Enter
Noticed a mistake Highlight text and press. Ctrl + Enter
We are
Results of the week. “Where will I grub?”History of the Bulgarian Air Force. Part of 2. The Bulgarian Air Force in World War II (1939-1945)
205 comments
Information
Dear reader, to leave comments on the publication, you must to register.