October 20 2015
35
Gas cartridges are on everyone's lips from the beginning of the 90s. But is it really such an effective means of self-defense? What are the types of gas cartridges, and in what situations should they be used? And also how to apply? How to choose a gas cartridge for yourself? We considered these and other issues in a new article in the cycle “For urban self-defense”. 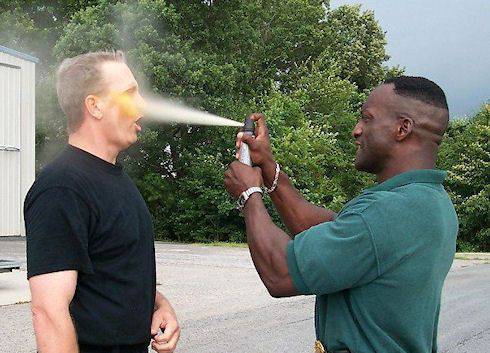 Plus gas cartridges are that they are a permitted means of self-defense, and they can be purchased at any specialty store. But there are also disadvantages that we will consider in this article.

Currently there are 5 types of gas cartridges:

- Aerosol - the classic version that allows you to create a wide cloud of annoying gas, a kind of "veil". In theory, effective against a group of attackers.

Disadvantages: when used in a limited, closed space, it will in the same way affect the defender as well as the aggressors. And not the fact that the defender will be able to better transfer the effects of irritants on your body. It will be very insulting.

- Jet - a narrow, directed jet, which can only be “filled in” by the enemy, without harming others (even in a subway car).

Cons: requires precision and firm hands, which automatically reduces the number of users. The average girl (if her last name is not Lotkova) is unlikely to be able to get a jet exactly on the villain’s eyes. In general, because of the stress of an untrained person, his hands will shake, which will also prevent him from getting into the eyes of the aggressor. Do not forget that the defender will most likely have only one attempt, limited to a couple of seconds - the enemy will no longer allow. Awareness of this, too, will give adrenaline that does not contribute to the hardness of the hands.

- Spray jet (directional cone; as a rule, a large droplet spraying) is the "golden mean" between the two species listed above. It is easier to get, but the respiratory effect is less than that of aerosols.

Cons: compared with other types of GB (gas cartridges) less.

- Frothy - refers to the new types of GB. Getting into the eyes of the aggressor, it closes them, making it impossible to see, which makes it possible not only to continue self-defense (to the extent permitted, of course), but also to escape from the swearing source of danger. The advantage is that it can also be used in a closed room.

Cons: the same as that of the jet spray - in an extreme situation, you need to have time to pull out, and even get into your eyes.

- Gel - The latest generation of gas cartridges, a miracle of engineering. Gel harder to wash away from the eyes. Can also be used with strong winds. The defeat distance is up to 3 meters.

Cons: the same as in the previous species.

Usually, only one irritant (tear-irritating substance) is included in the gas spray mixture, but there are also spray cans with two irritants. You should carefully read the label on which the composition. 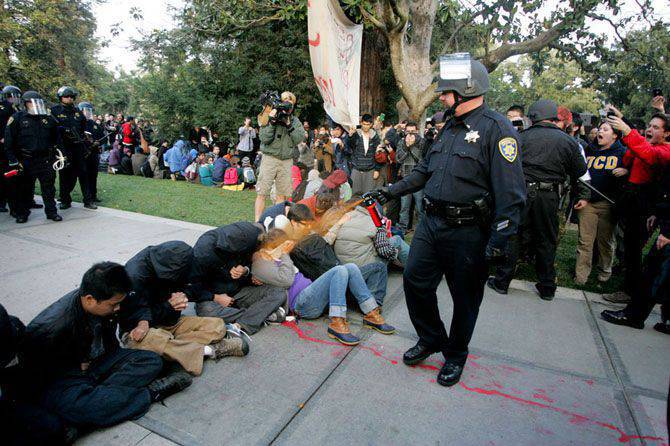 - 25 ml - the smallest, enough for 1-2 application. But you don’t need more, and such a can best fits in a regular pocket. In addition, in a small canister, the concentration of irritants may be higher.

- 100-650 ml - these are unlikely to fit in a handbag. Probably, instead of such a large GB, it is better to advise another means of self-defense. For example, an ax. Joke.

- First, you should buy a cheap gas canister, similar in its parameters to the one you want to use in case of danger. Or even buy the same. And experiment - to see somewhere in the fresh air how it will act. Extremists can even be advised to enter the edge into an aerosol cloud in order to feel the effect of the gas on themselves. And immediately go out.

- Secondly, the spray button should be pressed not with your index finger, but with your thumb. This will allow you to aim better and hold GB in your hand harder.

- Thirdly, when using a jet (gel, foam) spray can be sprayed on the target, also testing for a distance of use. It's one thing to read the instructions, another thing is to try it yourself, getting visual and other sensations. It is also worth spraying the spray in the wind to see the effect of the wind on the jet.

- Fourth, in our time, some manufacturers began to produce and training gas cartridges, which are identical to the present in appearance and volume, but do not contain irritating substances. Such training cans are very useful, you can do various exercises with them:

1. Just learn how to pull out a spray can and use it on a living person, since practice is needed everywhere, subjective sensations - while in safe conditions and without consequences. It's one thing to imagine how you are doing something, another is to do it.

2. Trying to use it against a partner who imitates an aggressively pushing / attacking “pompous” - many of the illusions about their skills will immediately dissipate, and perhaps this will make you think about a more thorough working out of pulling and aiming. Agree with a partner that if you do not have time to “fill” his training gas, he can “punch” you through the solar plexus - to create a stressful environment, excitement. 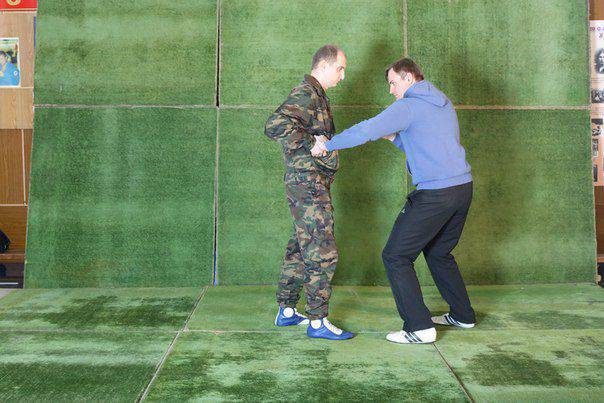 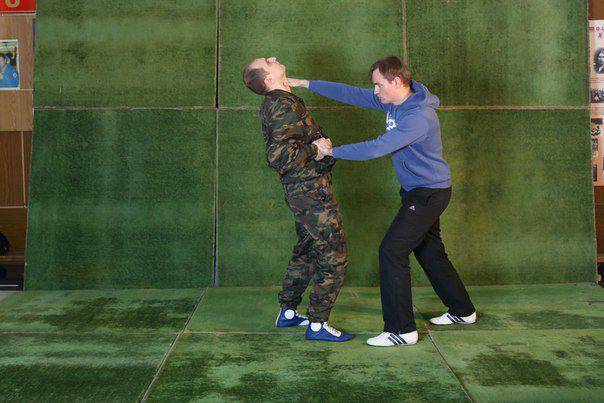 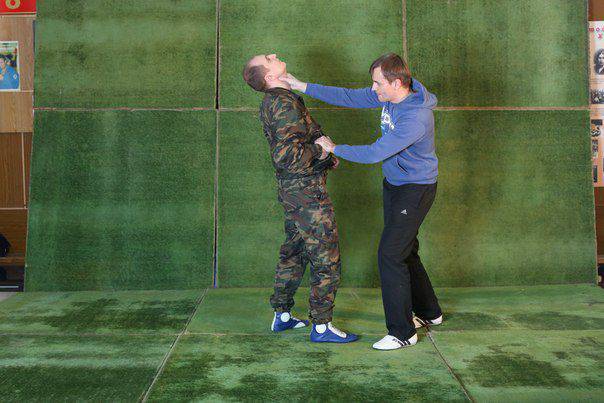 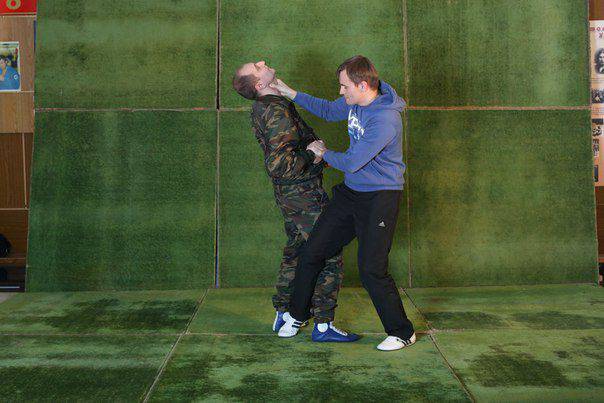 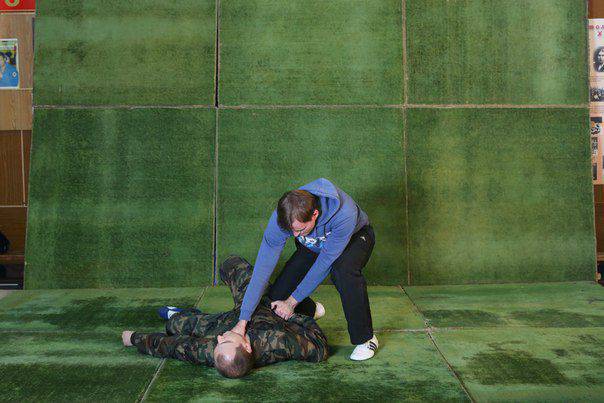 3. It can also be a mutual skill development - after all, anyone can be attacked with a gas canister. On assignment, two partners stand opposite each other. The first in the pocket GB. First, the distance is greater so that the pulling out can learn, then it is reduced. At the signal, the first one should as soon as possible pull out the training gas spray and try to spray it, the second first performs only one action - tries to fix the arm with GB. It further acts on the Adam's apple (punch, grab, back footstep), or groin (knee punch). Then the second, for example, tries to strike with all his strength on the lower leg (so that the first one feels real pain, which gives a sense of danger, heightens the desire to pull out the training gas spray quickly - in general, it creates motivation). 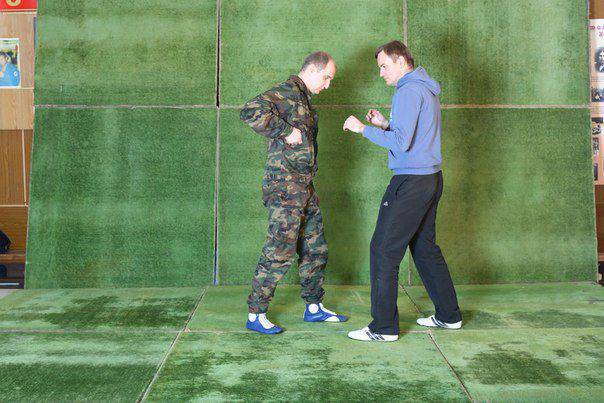 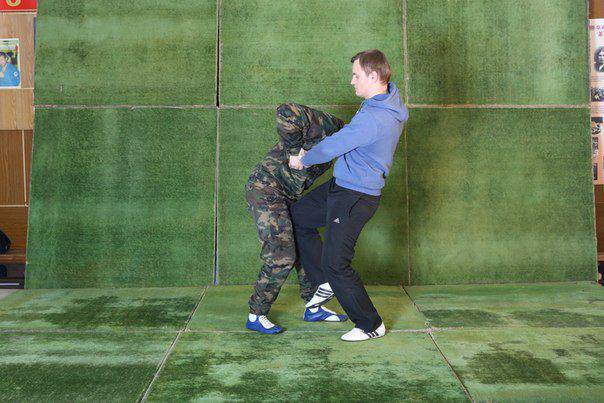 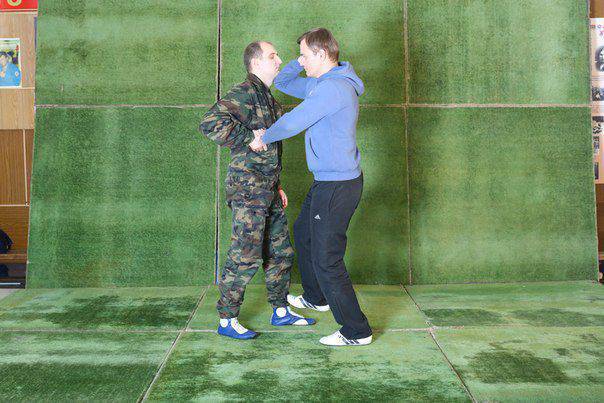 Neutralization of the effects of poisoning with tear-irritating substances:

1. If you just got into the room where someone sprayed gas, you must either leave it or open the windows and air out. You can even open windows in public transport. You can also wrap your face with several layers of clothing and breathe through this improvised "respirator." Breathing in this case must be superficial, shallow.

2. If the gas gets into your eyes, you need to sit down on a chair, bench, or just squat down. Due to the effects of gas, eyes close, and because of this, you can fall or hit something.
- remove residual irritant from the face with a dry napkin or cloth
- rinse thoroughly with warm water
- and it is even better to wash off the remnants of milk, or soak a paper towel and wipe eyes and face
- it is also possible to use vegetable oil - apply on face, and carefully wipe
- it is also possible to drip antiallergic drops into the eyes
- the irritant needs to be washed from the face with a dirty area of ​​the towel every time
- eyes and face must not be rubbed

Summing up, let's say, hand-to-hand coaches are usually skeptical about the use of gas cartridges for self-defense - this tool is too unreliable. Gas spray does not work with everyone - even the vaunted "pepper". It may not work on drunk or "stoned" aggressors. Gas spray works worse in winter due to lower pressure and thickening of the substance. In addition, in the winter he acts worse on people - sometimes irritants start acting only after half an hour. Even for effective spraying, aerosols need to be close to the aggressor - which is also fraught. As for the use of GB to scare dogs, it can help, but it also depends on the situation. Of course, dogs have a more developed sense of smell and a strong smell, they may not like it. But will the GB work against a trained border dog, for example? The conclusions and choices are yours.

Ctrl Enter
Noticed a mistake Highlight text and press. Ctrl + Enter
We are
Stick for city self-defenseMy humble experience (survival instruction)
35 comments
Information
Dear reader, to leave comments on the publication, you must to register.