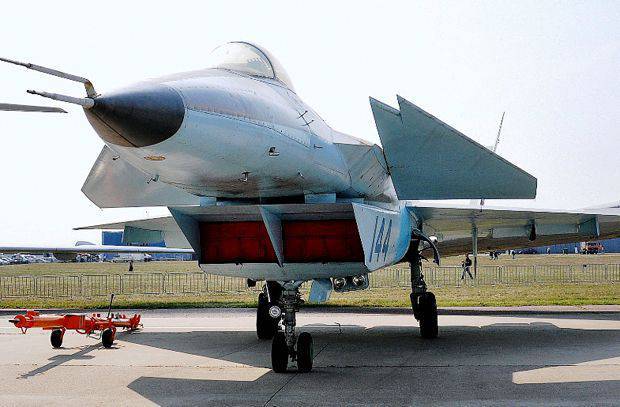 The fifth-generation multipurpose fighter MiG 1.44 MFI, in its characteristics, was not inferior to the American competitor F-22 “Raptor”, but lost in the undercover games

The lack of demand for the latest developments, ahead of their time, always evokes a certain feeling of regret and dissatisfaction. But it becomes extremely offensive when it is connected with the advanced domestic development of defense significance, which 15 was brought to the current full-scale sample years ago, in no way inferior to the foreign analog, but was not implemented for some unknown reason. And the result was a lag from a likely adversary and very significant material and moral costs.

In this case, we are talking about a prototype of a multifunctional front-line fighter of the 5-generation MiG 1.44 (project MFI). After two real flights at the beginning of 1999, according to other sources, the secret aircraft 2000, became an exhibit of long-term storage at the Flight Research Institute (LII). Gromov, and the promising project was closed. After years of neglect, the MFI was openly exposed for a wide view at the MAKS-2015 Moscow Aerospace Show, which aroused some interest in the MiG 1.44. What was this unique aircraft, which on 15 was years ahead of the X-NUMX-generation T-5 fighter created today?

Prospective 5 generation fighters began to be created in the 70s of the last century in the USA and the USSR. We have work on such an aircraft for the Air Force and Air Defense began in the year 1979 under the program and 90 ("1990-fighter" s). In 1981, the Central Aero-Hydrodynamic Institute (TsAGI) issued recommendations on which the OKB Design Bureau began working in 1983. A.I. Mikoyan. To this end, the “Integrated Target Program” was developed, which provided for a combination of work on the aircraft, power plant, avionics and weapons in accordance with the tactical and technical requirements of the Air Force and Air Defense. In 1987 and 1991, the avant-project and the draft design with the aircraft model, respectively, under the index of the MFI, a multi-purpose front-line fighter, were protected. At its base, it was planned to develop variants of a reconnaissance aircraft, a ship-based fighter and other modifications.

According to the project, the MFI should have super-maneuverability, fly at supersonic speed without afterburner, be hardly noticeable in the radar and infrared ranges, have a different architecture of on-board radioelectronic equipment (EIR) with a high degree of integration of all its systems and have improved take-off and landing characteristics compared to the existing ones by samples.

Difficulties in creating a promising aircraft began after the inclusion of the MAPO MiG in the 1999 in the Sukhoi Design Bureau and the transfer of work on the new project to the latter. The rationale for this was the allegedly high price of MFIs and the approval of MA. Pogosyan, head of the Sukhoi Design Bureau, about the superiority of their C-37 project over the IFIs.

Despite the official cessation of work on IFIs, according to some reports, in 1999, February 29 of the same or 2000, the first prototype took off. However, Pogosyan’s lack of interest in MFIs, which already had a high level of readiness for launching in mass production, and most importantly, the struggle for state funding for “their” company and its S-37 project, with obvious failures with it, led to the closure of the MFI project. And in 2002, a government decree was issued on the creation of a promising front-line aviation complex aviation (PAK FA) T-50, which finally and simultaneously “buried” both MFI and S-37.

Thus, a really flying promising aircraft with a high probability of adopting and launching into a series that met the requirements and in some cases surpassed the American counterpart, for reasons that were incomprehensible at first glance and quite understandable for specialists, was removed "on the shelf". And this is despite the fact that in the USA, work on the 5 generation fighter F-22 Raptor (Predator) continued and in 2001, it was adopted. 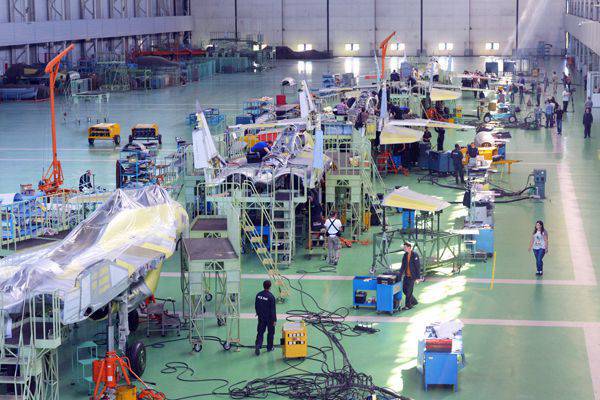 Workers in the final assembly shop at the enterprise of JSC RAC MiG. Photo: Mikhail Voskresensky / RIA News
Purpose and main characteristics of the MiG 1.44

The MiG 1.44 (IFI) is a pilot prototype of a multi-purpose front-line fighter (MiG-35 if adopted). The first flight, according to various sources, made February 29 1999 or 2000. For some characteristics surpassed the American fighter F-22 Raptor. The low-visibility was achieved by a special radio-absorbing coating and a special design of the vertical tail fin keels. One flight copy was created, and four more in varying degrees of readiness were at the Sokol aircraft factory.

The main features of the 1.44 MiG: duck design, high aerodynamic quality delta wing, variable thrust vectoring engines (planned to be installed), flying at supersonic speed without afterburner, radio absorbing coating, placing all or most of the weapons inside the aircraft fuselage, extensive use of alloys and composite materials, an air refueling system, two adjustable air intakes.

According to some information, on the basis of the MiG 1.44 at the beginning of the 1990-ies a lightweight fighter with one engine was created with the same aerodynamic configuration.

As can be seen from the above, the closure of the MFI project has become a kind of deep “moral wound” for our aviation, which has resulted in significant financial losses and more than the 15-year lag of Russia in equipping our Air Force with a 5 fighter. According to the current commander-in-chief of the Russian Aerospace Forces, Lieutenant-General Viktor Bondarev, serial deliveries of the T-50 fighter will begin in the 2016 year. To justify the situation with the creation of the Russian 5 fighter generation, the media have repeatedly reported almost deliberately delaying the development of the T-50 design bureau for the Sukhoi design bureau. This was due to the desire to take into account the shortcomings that are identified during the practical flights of the Raptor. But if we approach this more strictly, then the current situation cannot be explained otherwise than with the words “good mine in a bad game”.

In order not to drive the reader into black melancholy, it should be noted that works with the Russian 5 generation fighter of the T-50 generation are going quite fast and, most importantly, the aircraft already today shows high efficiency. And do not detract from the merits of its creators. But the lag exists, as well as those who doubt its superiority over the 1.44 MiG. At one time, the former chief of armament of the Russian army, Colonel-General Anatoly Sitnov, believed that the T-50 fighter did not have the potential that had been incorporated into the MiG version of the 5 fighter.

According to many aviation specialists, the work of both renowned design bureaus on an equal basis was a blessing and was in favor of our aviation. This practice should continue today. For healthy competition never stood in the way of progress, but, on the contrary, only stimulated it. The fact that all is not lost is indicated by the reports about the intention of the Migovans, which appeared in August 2015 of the year, to resume work on a light perspective fighter. Aviation experts believe that the basis of this work will be developments in the IFI project. If so, then I would very much like to wish them, as the sailors say, "seven feet under the keel."

Ctrl Enter
Noticed a mistake Highlight text and press. Ctrl + Enter
We are
Lightweight fighter. Different point of viewAn-12 in Afghanistan
142 comments
Information
Dear reader, to leave comments on the publication, you must to register.