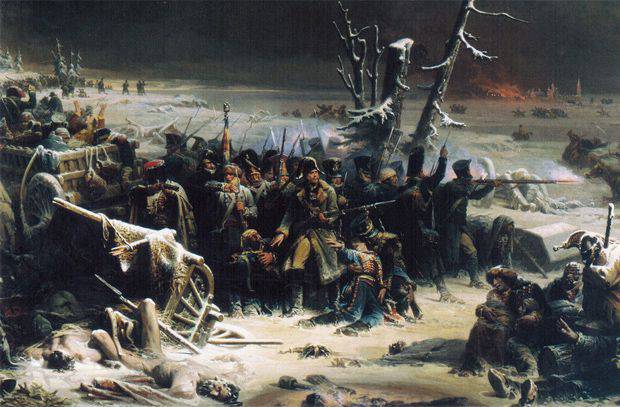 В stories There are frequent examples when a defeat in a war leads to reforms. It happens and vice versa - the won war gives the authorities reason to believe: since we won, it means that we have the most perfect state in the world and, therefore, no reforms are needed. The victory over Napoleon gave society hope for change, but at the same time made the ruling elite fight to ensure that there was no change. Under the sign of this contradiction, the entire nineteenth century will pass, and at the beginning of the twentieth century it will develop into destructive revolutions.

There is a people's war

The struggle with Napoleon was not easy for the country: it was conducted at the limit of human strength and economic opportunities. The demographic and economic results of World War 1812 of the year were regrettable. The Russian people paid for the victory of approximately 2 with millions of lives. Already in 1813, natural population growth stopped, and in the provinces where military operations were conducted, it began to decline rapidly: for example, the population of Smolensk province decreased by 57 thousand, and Tverskaya - by 12 thousand people. According to official data of that time, the treasury's expenses for the war amounted to 157,5 million rubles, the expenses of the population itself - about 200 million. It is believed that the total material losses of the Russian Empire amounted to at least 1 billion rubles. Many cities and villages were ravaged, about a third of the country's workers were mobilized. The war has exhausted the population's solvency, and already in 1815, in a number of provinces, payment of taxes ceased, which led to the devastation of the treasury.

After such a hard victory, the society was waiting for a change. If the eighteenth century and the early period of Alexander I's rule were characterized by a passive-optimistic mood of Russian society (Russia moves toward a better future under the just and wise rule of the monarch), then after the war, it was replaced by an active desire for reform. During the fighting abroad, officers and soldiers were able to compare the Russian reality with the everyday life of Europe and rendered a verdict against the Fatherland. The feeling of the power of Russia, its transformation into the European hegemon was characteristic of a wide circle of nobles - Pushkin expressed this feeling in his famous poem:

O predatory galls! and you have fallen in graves.

But what do I see? Ross with a smile of reconciliation

However, society also felt a striking contrast that existed between the foreign policy successes of the empire and the scarcity of its internal life. Reaping the fruits of victory at the Congress of Vienna, Russia at the same time could not restore order at home: the standard of living of a huge mass of the population lagged behind the European, as did civil liberties. In the decade that followed the war, publicists published articles about "how we can equip Russia," they submitted to the emperor drafts and notes. The officers, who returned from France, became distributors of liberal ideas among nobles and townspeople, and not only in the capital, but also in the provinces. Literary and educational circles arose among the noble youth, where the young men talked about politics and the historical destinies of the country. In 1814, the first secret organization was set up, aimed at establishing a constitutional monarchy in Russia, the Order of Russian Knights, established by Mikhail Orlov and Matvey Dmitriev-Mamonov. 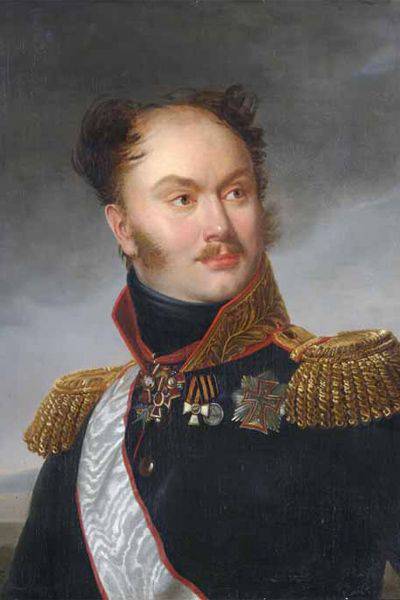 Portrait of MF Orlov by A.-F. Riesener. Photo: Wikipedia.org
The war years were marked by an unprecedented rise of patriotism, without which foreign invaders could hardly be defeated: half of the private funds spent on the war were voluntary donations. The war acquired a genuinely popular character, which was reflected in the formation of the militia and the appearance of partisan detachments. This rise of patriotism at the end of the war aroused in the nobles an interest in the past of the country, in which they began to look for answers to burning questions. Suffice it to mention that the first three thousandth edition of eight volumes of Nikolay Karamzin’s “History of the Russian State”, printed in 1818, was sold out in stores in three weeks.

Aware of public sentiment and being a staunch constitutionalist, Alexander I in 1818 ordered the Minister of Justice Nikolay Novosiltsev to prepare a draft constitution - a charter of the Russian Empire. The project provided for the transformation of the empire into a constitutional monarchy with a bicameral parliament - the State Sejm, whose lower house would be elected by the nobility assemblies. The constitution was supposed to secure basic civil liberties - freedom of speech, the press, the right to private property. However, the adoption of the first Russian constitution hampered the issue of serfdom - the most acute and complex of all those then facing the government.

The exploits of simple peasants forced society to take a different look at the role of the oppressed class. It is believed that the Patriotic War was an important milestone in the transformation of the Russians into a nation. The officers who saw the heroism of their soldiers could no longer treat the serfs as property, and serfdom became perceived by the most enlightened part of society as an ugly and amoral phenomenon.

The peasant militiamen who had returned from the war looked differently at their masters. Serfdom now seemed to be an anachronism and it really was. An almost anecdotal case is known, when in 1830-s a cook of one of the Russian princes, having quarreled with his master during their life in Paris, went to the police station with a complaint against him. According to the French laws of that time, he could have sought asylum and, having remained in France, become a free man and a full-fledged citizen there. However, after some reflection, the cook decided that he would be unbearable to live far from his homeland, and went to ask the Prince for forgiveness in order to return to Russia in his former slavish position.

After the expulsion of Napoleon, many peasants were waiting for the abolition of serfdom as a reward for participating in the war. However, in reality, there was no relief of the fate of the serfs, but, on the contrary, regress in the development of their relations with their masters. The fact is that a significant part of the nobles, whose property was heavily damaged by the war, decided to "sit on the ground": to intensify the exploitation of the estates belonging to them. The nobles in the agricultural provinces transferred the peasants back to serfdom, which they themselves had replaced with a lighter dues before the war. In the industrial gubernias this was unprofitable, and the landlords tried to increase their incomes by increasing the size of the dues, which also affected the position of the peasants. 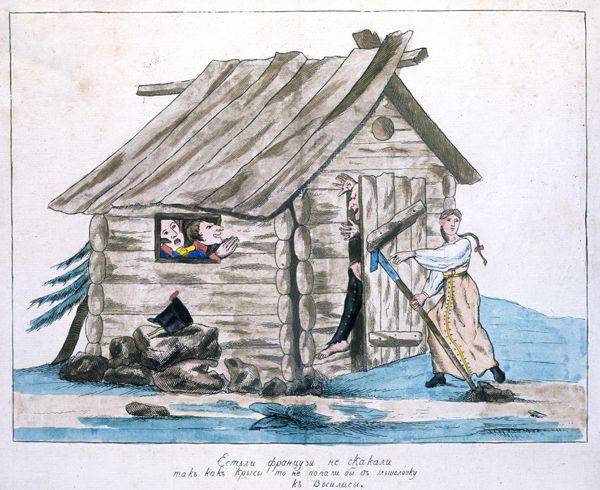 Reproduction of the drawing “Peasants-Partisans in the Patriotic War 1812 of the Year”. Author: I.Terebenev. Splint.
It is noteworthy that in society, even in its highest circles, the attitude towards the issue of serfdom was extremely confusing. For example, Alexander I initiated the publication in French of the course of political economy of Academician Storch, which the emperor readily read to the grand dukes, suggesting to them that any bonded labor was immoral and economically unprofitable. However, when this work was translated into Russian, it was immediately banned by censorship. And when the Kharkov professor Johann Shad published a course in Latin which expounded the same views, he was even sent out from Russia.

In general, the victory in the 1812 war of the year, one way or another, contributed to the disintegration of the serf system, but the process was long and difficult. Due to the fact that the abolition of serfdom, seriously discussed under Alexander I, was implemented only a decade later, Russia and by the beginning of the twentieth century could not cope with all the difficulties generated by this reform.

The Manifesto of Enlightened Conservatism

As you know, Alexander I confined himself to the liberation of the Baltic (Estland, Kurland and Livland) peasants. The decision to abolish serfdom throughout Russia was never made, and after the death of the emperor, it completely disappeared from the agenda. Both the position of the conservative-minded part of the nobility and the fear that the emancipation of the peasantry would lead to increased unrest in society prevented the abolition of the position. Waiting for nobles to abolish outdated sociopolitical institutions coexisted with fear of possible changes, because it was in the postwar decades that Europe experienced political upheavals that could not but cause the ruling elite of the empire and the broad circles of nobility to recur in Russia. A lot of frightened the new emperor Nicholas I by the Decembrists' speech, which forced him to strengthen the course towards the reaction, which marked the last years of Alexander's rule.

It is curious that the victory in the war, paradoxically, promoted the propaganda of the mindsets of conservative officials and publicists, who believed that Russia had won precisely because of the perfection of its institutions. Conservatives were looking for the origins of the power of the empire in a particular way of development of the country. Already under Nicholas I, the main features of this particular path will be formulated in the famous Uvarov manifesto: “Autocracy, Orthodoxy, Nationality”. The conservatives advised the government to put all the reforms on the brakes. Thus, Faddey Bulgarin, in a letter to the Third Division of His Own Imperial Majesty's Office in 1826, already after the Decembrist uprising, suggests skillfully turning public discussion into empty conversations unrelated to the current reforms: . Let them judge and rydyat, laugh and cry, quarrel and reconcile, without touching matters important. People will immediately find a subject for mental activity and will be calm. "

World War 1812 of the year became a certificate of maturity for the Russian nation: realizing its unity in the war, society dreamed about improving the position of the people, about liberal reforms. It can be said that the entire civil movement of the XIX century grew out of the social uplift that occurred during the Patriotic War. Alexander's disappointment in the course of the Nicholas era already grew into a deaf annoyance of government policy, from which it was within easy reach of the real, truly radical opposition — the revolutionary organizations of 1860 – 1870.

If you managed to solve the main problems, which were well recognized by the advanced part of society, Russia could still be a constitutional monarchy like the British. However, it turned out differently: due to the fact that these problems were not resolved and over the next hundred years, the cudgel of the people's war, which the Russian peasant bludgeoned Napoleon, would eventually hit the throne of the Romanovs themselves.