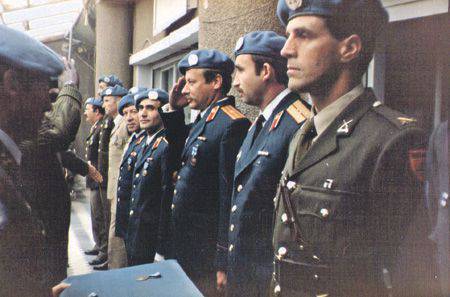 In recent years, the world community is increasingly confronted with problems that have a negative impact on the maintenance of peace and security on the planet. Increasingly, in various regions and individual countries, the resolution of these or other contradictions by force becomes a priority, which leads to the emergence of intrastate and international conflicts, and often - serious local wars. That is why international institutions such as the United Nations are becoming increasingly important in world politics, the 70 anniversary of the formation of which all progressive humanity will celebrate October 24 this year.


This event will be celebrated in our country, especially among Russian peacekeepers. In 1988, the UN peacekeeping forces were awarded the Nobel Peace Prize. This is the merit of our peacekeepers.

The first UN peacekeeping mission was established on 29 on May 1948 of the year and was called the Armistice Monitoring Organization (UNTSO).

Russia has significantly lagged behind the world community in the field of peacemaking, both in theory and in practice. Only after 25 years, in 1973, by the decision of the USSR government, in accordance with a UN Security Council resolution, the first group of Soviet officers was sent to the Middle East to serve in UNTSO at UN military observers. Their tasks included monitoring the cease-fire in the Suez Canal zone and the Golan Heights after the end of hostilities.

Beginning in 1991, Russia's participation in peacekeeping operations has intensified. In April, a little more than a month after the end of the Persian Gulf War, a group of Russian UN military observers were sent to the Iraqi-Kuwaiti border area, and in September of the same year - to the Western Sahara. Since the beginning of 1992, the scope of our military observers has spread to Yugoslavia, Cambodia, Mozambique, and in January 1994, to Rwanda. In October, by UN decision, our observers were sent to Georgia, in February, 1994, to Angola, in March, 1995, to Guatemala, in May, 1997, to Sierra Leone, in July, 1998, to East Timor, to November - to the Democratic Republic of the Congo. In order not to list all the missions, I’ll say that all our officers took part in 1999 UN peacekeeping missions as military observers, who are called “blue berets”.

Blue berets are officers in the rank of captains and majors. They traveled from Russia with green diplomatic passports (now mainly began to give regular service) and, arriving in the mission area, received the so-called white cards - documents certifying that they are UN employees.

Blue berets are essentially military diplomats. They do not have weapons and are protected by diplomatic immunity and the UN flag.

The working language of military observers is English. Knowledge of other languages, especially the language of the host country is encouraged. Before being sent to a mission, they undergo a rigorous selection and special training courses. From 1973 to the present, about 2000 Soviet and Russian officers served as UN military observers. Currently, they have become officially called military experts of peacekeeping missions.

Our officers have proven themselves so well in all missions that, having gone to the reserve and becoming veterans, they are still in great demand. Our Interregional Public Organization of veterans of UN peacekeeping missions in cooperation with the Ministry of Foreign Affairs of the Russian Federation and the OSCE Secretariat sends candidates from its ranks to compete for the post of observer of the OSCE Special Monitoring Mission (SMM) in Ukraine. Seven people have already been officially credited to this position. Work with veterans - blue berets continues.

Since April, 1992, in the history of Russian peacekeeping, a new stage has begun, when Russia began to take part in peacekeeping operations as blue helmets. I want to stress right away that since the topic of this article only applies to UN peacekeeping operations, I will not dwell on other peacekeeping operations in which Russian blue helmets took part. I will only note that our peacekeepers acted in Abkhazia and Tajikistan under CIS mandates, and in Moldova and South Ossetia under bilateral agreements. As for the operations under the auspices of the UN, the events developed as follows. On the basis of UN Security Council Resolution No. 743, after completing the necessary domestic procedures, a Russian infantry battalion of 900 men was sent to former Yugoslavia, which was reinforced by personnel, armored personnel carriers BTR-8, anti-tank weapons, other weapons and military equipment in January 1994. Later on, our blue helmets took part in the UN mission in the former Yugoslavia in 80, where our paratroopers served with their colleagues from NATO.

We all remember and are proud of the march of our paratroopers, peacekeepers to Pristina. It can be said that it was a march of Russia in an attempt to enter the club of peacemaking on an equal footing, to demonstrate its national interests and potential capabilities, to increase its influence in the world community. It is a pity that instead of developing and building on success, the participation of our blue helmets in UN peacekeeping operations began to decline sharply and faded away. Despite the fact that the number of UN peacekeeping operations on the contrary increased. So, if in the first 40 years of the UN's existence, the entire 13 OPM was conducted, then, starting from the 1988 year, 58 new operations were initiated. The number of peacekeeping personnel also increased. While in the first UN missions from a few dozen to a few hundred military personnel, in 2015, the total number of contingents reached 106 245 people in 16 current UN missions. Russia, having withdrawn from the supply of military contingent for the UN peacekeeping forces, as of 1 in October 2015, remains on the sidelines.

Summing up, we get a disappointing conclusion. On 31 August 2015, Russia ranks the overall 75 in terms of the number of contingents supplied, taking into account the military contingent for peacekeeping forces, military observers and police officers. For comparison, it would be appropriate to say that Bangladesh ranks first, which, in 2015, allocated a total of 9432 military personnel to participate in UN peacekeeping operations. At the same time, the United States singled out 82 military personnel, Great Britain 289, France 909, China 3079, and Ukraine 546 military.

The non-participation or limited participation of Russian peacekeepers in the PKO adversely affects not only the ability of the Russian military to obtain real peacekeeping experience, but also the ability of Russia to influence the solution of crisis situations in different parts of the globe, actively defend their point of view on current international problems, determine the future system of world order. However, Russia does not show due interest in the evolution of peacekeeping. Another confirmation of this is the fact that on September 28 of this year, a Summit on Peacekeeping was held at UN Headquarters, where 43 countries signed the Declaration of Peacekeeping, and Russia is not on this list. Interestingly, immediately after the summit, the US President issued a Memorandum on Peacekeeping, which gave instructions to the Department of Defense, the State Department and the US Mission to the United Nations.

A reduction in participation in peacekeeping operations occurs despite the fact that in February 2013 of the year the Russian Foreign Policy Concept was published, which states that the Russian Federation, “considering international peacemaking to be an effective tool for resolving armed conflicts and solving state-building tasks at the post-crisis stage, intends to participate in international peacekeeping activities under the auspices of the UN and in the framework of interaction with regional and international organizations; will make an active contribution to the improvement of the preventive anti-crisis potential of the UN ”(p. 32: m, n, o). Much the same is said about peacekeeping in the Military Doctrine of the Russian Federation.

CONSENT IN MINISTRIES NO

Of course, a few quoted words are not enough to raise peacekeeping in our country to the proper level. Back in 2001, the “Independent Military Review” published an article entitled “Doctrine and Possibility”, which substantiated the need to create a national concept of peacekeeping and a special body under the President of the Russian Federation supervising, controlling and directing the activities of all state and public organizations involved in peacekeeping. Here is a small example of what problems such a body could solve. Russia sends its peacekeepers on a compensation basis. This means that the UN for its participation in peacekeeping operations transfers money to the Russian budget, where they remain, and are not transferred to the accounts of the Defense Ministry of the Russian Federation. In this regard, the military department is not interested in preparing and sending peacekeepers at its own expense, and it has not been possible to resolve the issue of obtaining compensation for many years. Our ideas were approved by the relevant government agencies, but things are still there, and 14 years have passed. One can only hope that the Foreign Ministry and the Defense Ministry of the Russian Federation will move from words to deeds. And for this now there is a very good reason.

The fact is that in September of this year, the report of the UN Secretary-General Ban Ki-moon “The Future of United Nations Peacekeeping Operations: Implementation of the Recommendations of the High-Level Independent Panel on Peace Operations” was published. In this report, he suggested the creation of the United Nations Rapid Reaction Force (SSR) on an ongoing basis to quickly resolve emerging issues. After all, in order to deploy a mission, it usually takes about six months. If the UN has its own special forces, this will dramatically improve the current state of affairs in UN peacekeeping. In this regard, Russia has a chance to reach the front lines of modern peacemaking. Russia has a special 15-I peacekeeping brigade, and it could take the initiative to create future Rapid Reaction Forces at its base, or at least suggest using the 15 Brigade and airborne units undergoing training in the UN peacekeeping system. The same applies to the CSTO peacekeeping forces.

AND A LITTLE ABOUT POLICE

Separately, I would like to say a few more words about our peacekeepers - the policemen. The systematic use of police in peacekeeping operations (PKO) began in 1989, and by the middle of 1990, virtually no POM was conducted without the participation of the UN Civilian Police, which is now called the UN Police or the International Police Force. By the beginning of the XXI century, the total number of international police forces under the auspices of the UN exceeded 7000 people, and in 2015 year reached 13 550 people. MPS play an important independent role in the PKO and are no longer subordinate to the military component of operations, since they are usually introduced after the end of hostilities and the elimination of military conflict to establish a peaceful life.

Since 1992, representatives of the Ministry of the Interior have served in UN, OSCE and European Union missions in Croatia, Bosnia and Herzegovina, East Timor, Kosovo, Macedonia, and Haiti. As already mentioned, 15 Russian police officers, including three women, are currently serving successfully in UN missions. I would like more. And women, too, given that only 13 550 police are in UN missions now.

We are in Yandex Zen
Hybrid War: Problems and Prospects for Post-Conflict Settlement
Military reform as an integral part of the security concept of the Russian Federation: Systematic dynamic assessment
54 comments
Information
Dear reader, to leave comments on the publication, you must to register.