The Emirates showed a second prototype of their Enigma armored vehicle. 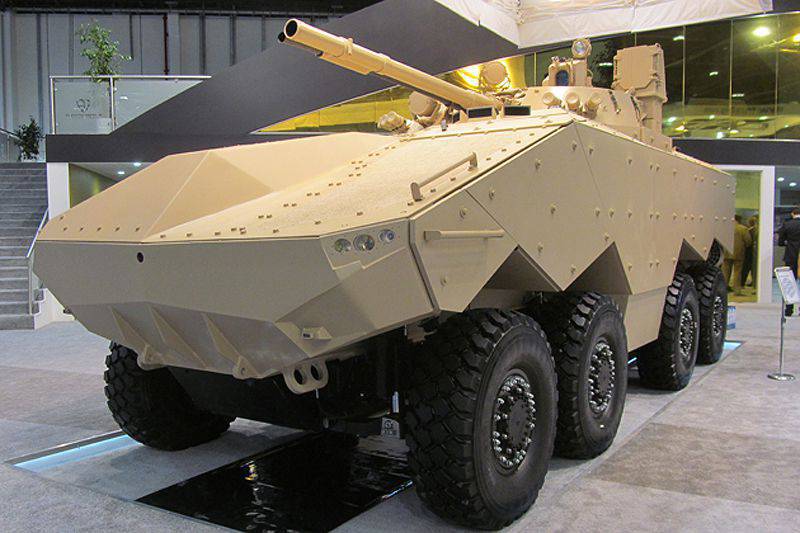 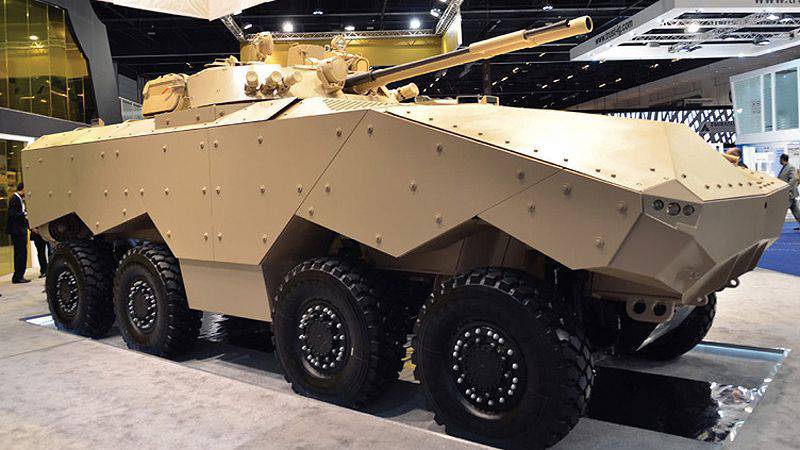 The first Enigma machine has a full mass of 28 tons, and its modular reservation kit will simplify upgrades when changing types of threats or the emergence of new technologies. 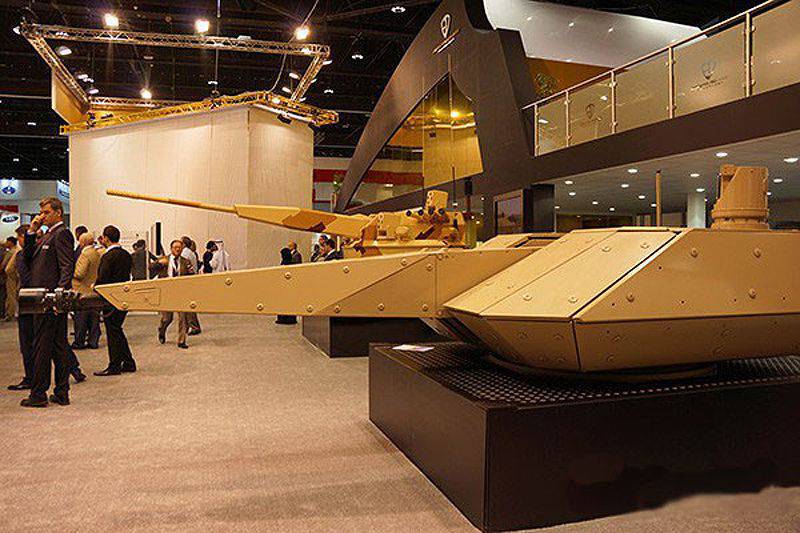 The Enigma AMFV armored vehicle is capable of accepting armaments weighing up to 5 tons, including the Russian AU220M turret with the 57-mm cannon (in the background) and the remote-controlled 35-mm Skyranger tower of the Rheinmetall Air Defense (in the foreground)

Emirates Defense Technology presented the second model of its Enigma 8x8 AMFV (Armored Modular Fighting Vehicle) modular armored vehicle, which was developed over three years in close cooperation with a number of foreign defense enterprises. The first Enigma (riddle), built in February 2015, is currently used for further development work. The second car before the end of this year should pass the extended tests in the United Arab Emirates.

One of the developers, Enigma AMFV, said that the machine “was designed specifically for the needs of the Middle East” (unlike most 8x8 machines in this market, which were modified to fit the region’s natural conditions and industry standards) and has significant potential for growth.

In order to simplify production, the hull is made of armor steel with a minimum number of complex welds, it is possible to install additional sets of reservation on it. The first car has a set of passive modular armor, but its considerable structural flexibility means that protection can be enhanced by lattice screens, mesh screens or dynamic protection units.

The hull can withstand the explosion of an improvised explosive device (IED) with a mass of 50 kg at a distance of 5 meters from the vehicle. According to Emirates Defense Technology, Enigma guarantees ballistic protection in accordance with the 4 level according to the STANAG 4569 standard and mine protection in accordance with the 4a and 4b levels.

The layout of the car is quite familiar, the power unit is located in front of the right, the driver to the left of it, the rest of the armored vehicle volume is intended for the landing, armament and various systems. Engine Caterpillar C13 power HP 711 (by adjusting it can be increased by 10%) mounted in a single unit with a seven-speed CAT CX31 transmission and a two-stage transfer case from Timoney Technology. The entire power unit can be removed entirely, which speeds up its replacement and maintenance in the field.

The gross weight of the machine is currently estimated at 28 tons, which gives a good power density of the 25 hp / t. The car accelerates in 16 seconds to 60 km / h and develops a maximum speed of 130 km / h.

All bridges have transverse locking differentials; Timoney Technology has also designed a new independent suspension with double wishbones, which, in combination with the hydraulic pillars Horstman Hydrostrut, allow you to adjust ground clearance and control the ride, depending on the type of terrain.

Future vehicles can be equipped with active suspension to further increase cross-country traffic, as well as to increase the stability of the weapons platform.

Like almost all modern 8x8 armored vehicles, the Enigma project has a standard centralized swap system for the Michelin 395 / 85R20 armor wheels.

The suspension and running gear are mounted on three subframes attached to a single-volume body. Subframes allow you to remove the suspension and differential units as separate assemblies, which simplifies and speeds up damage repair and maintenance.

In the configuration of an infantry fighting vehicle on Enigma, various turrets and weapon systems of up to 5 tons can be installed. The first copy has the same twin turret installed on the BMP-3, armed with an 100-mm rifled 2A70 gun, 30-mm 2A42 automatic gun with selective power and a paired 7,62-mm machine gun.

This tower, installed on the Emirates BMP-3, is the most powerful in its category; its gun, along with traditional ammunition, can fire laser-guided munitions at a distance of more than 4 km.

Other weapons systems can be installed on the machine, for example, the Uralvagonzavod’s newly developed AU220M turret with an 57-mm cannon or the remote-controlled Skyranger turret with an Rheinmetall Air Defense 35-mm cannon, firing Advanced Hit Efficiency And Destruct (AHEAD), which can be programmed ammunition (AHEAD), with a programmable ammunition. destruction).

Alternatively, you can install a lightweight howitzer M777 155-mm / 39 caliber BAE Systems, which in towed configuration is currently in service with Australia, Canada and the United States. In this case, a howitzer is installed at the rear of the platform and firing at the rear arc. Guidance, loading and shooting howitzers with this arrangement is carried out by a dismounted crew. 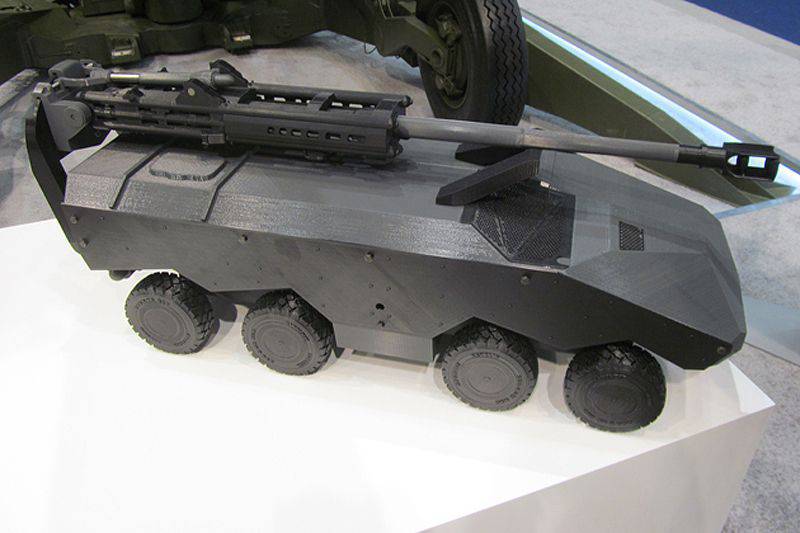 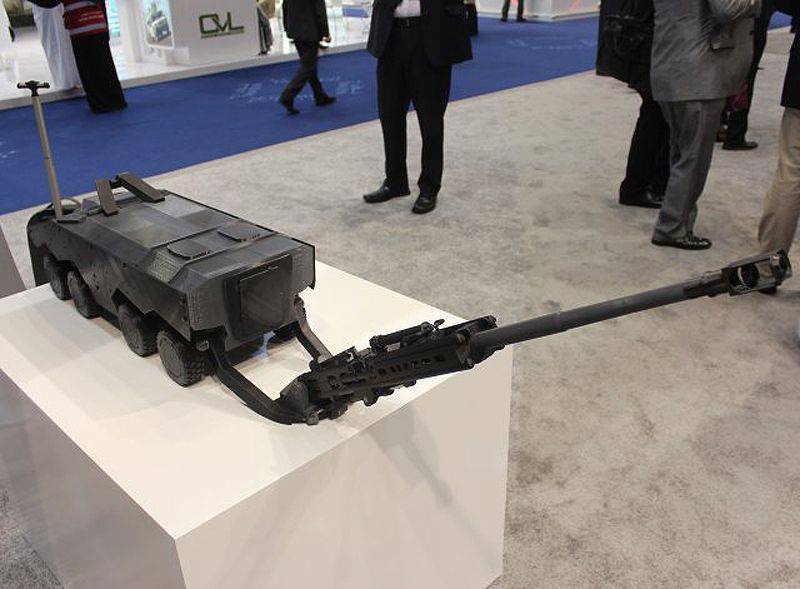 In the configuration of the BMP, the crew of the vehicle consists of a commander, an arrow and a driver; they and eight paratroopers are sitting on energy absorbing seats. However, when mounted on the roof, instead of a turret, a remote-controlled combat module armed with an 7,62-m or 12,7-mm machine gun or an 40-mm automatic grenade launcher, space is available for another two paratroopers.

The two front and rear axles have an electro-hydraulic steering gear that provides the turning radius of the Enigma 18 meters. When the machine reaches the 20 km / h speed, the rear axle control is blocked to increase stability and more predictable front wheel control.

The first Enigma machine is equipped with all-round cameras. The video image is displayed on the display of the commander, shooter and driver. Additional screen in the troop compartment allows you to increase the level of situational awareness of the landing force.

Standard equipment includes a life support unit consisting of an air-conditioning system and a system for protecting against weapons of mass destruction. The electrical system has a voltage of 28 Vol, the machine is equipped with a generator on the 630 Amp and a CANBUS communication bus. An auxiliary power unit can be installed to ensure the operation of specialized options with increased power consumption, for example, a control center or an electronic warfare station.

Enigma can overcome water obstacles to a depth of 1,8 meter, but its design allows you to optionally get a completely floating machine despite the full mass of 28 tons. On the first prototype, shown in February 2015, two water jets were installed on each side of the stern. The preparation for the float consists in setting up the hatches and doors, raising the wave-reflector shield, turning on the bilge pumps and water jets.

The UAE is planning to purchase a large number of 8x8 BMPs along with more specialized options and local manufacturer Emirates Defense Technology hopes that Enigma will be able to meet these needs.

The UAE is seeking to produce more and more military equipment and weapons in their own country. An example is the Nimr 4x4 and 6x6 armored vehicles for the domestic and foreign markets, as well as small weaponguided weapons and various types of ammunition.

Emirates Defense Technology is responsible for the design, development and production of original Nimr 1 and Nimr 2 variants and is to produce 750 machines of this type today. 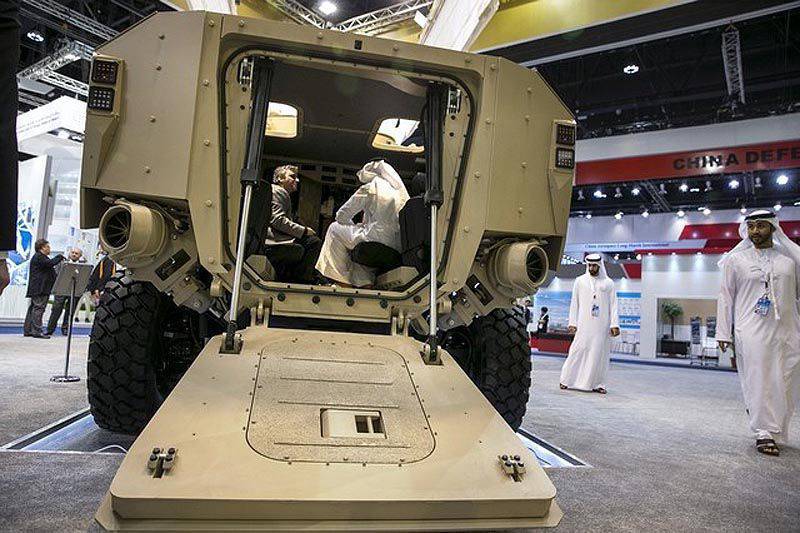