Tactical advantages of the "hypersonic drone" for "Tornado" 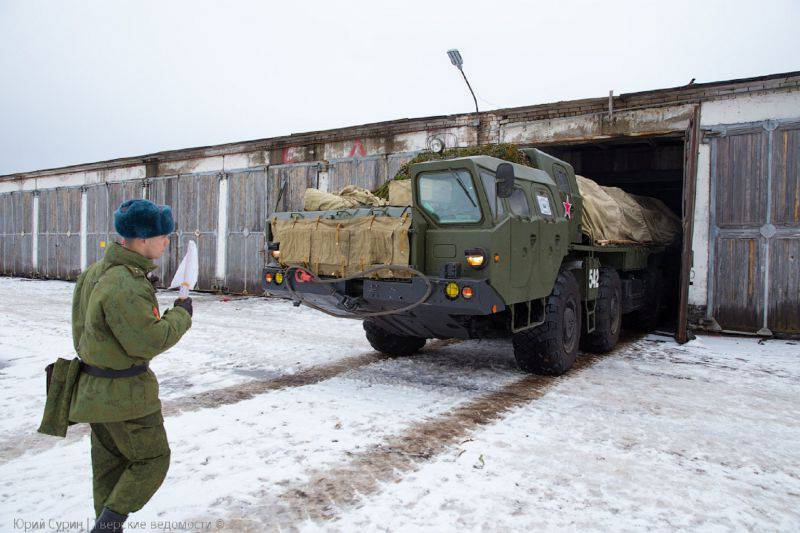 Self-propelled launcher MLRS 9K58 "Smerch" leaves the garage of one of the military units near the city of Tver. The system is one of the most powerful in its class, however, it needs to be upgraded as soon as possible in the missile part. The lack of adjustable or guided missiles creates significantly more risks in a difficult tactical situation in the theater: due to the decent spread of the NURS over the affected area, friendly military units may be affected, and at worst - civilians, as shown by the escalation in the Donbass Photo Fishki .net

Medium-range and long-range rocket launchers are becoming increasingly relevant today. Meanwhile, in the modifications used today by the modern MLRS, there is a huge technological contrast in the designs and methods of targeting unguided, corrected and cluster missiles: the standard systems BM-21 "Grad", BM-27 "Hurricane" do not differ by the introduction of something in common with high-precision rocket weaponsthat we saw during the use of these machines in the battles in Novorossia: the thoughtless use of systems by the Ukrainian side led to enormous destruction and casualties in the DPR and LPR, making the Kiev authorities a criminal formation. 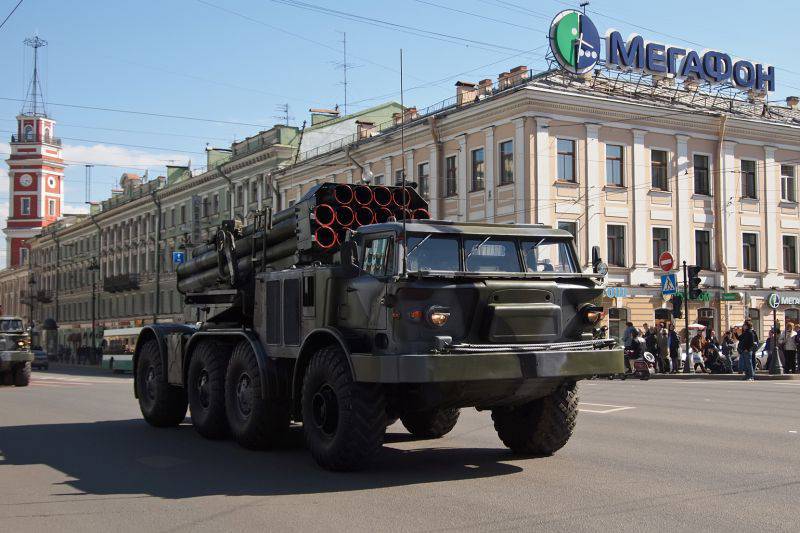 Fighting vehicle MLRS 9K57 "Hurricane". It has a sufficiently long range, at the same time, low accuracy of combat (+/- 1,3 - 1,4 km), in comparison with the guided missiles of the “Polonaise” system, make unguided 9М27К cluster shells a real weapon of mass destruction Photo Voennoe-obozrenie.ru

At the same time, Russia, China and Belarus achieved significant success in the formation of a new image of rocket artillery as a whole. In China, in 2010, one of the most advanced long-range MLRS systems, AR3, was developed, in which 300-mm unguided and corrected missiles and 370-mm guided missiles boldly belonging to the class of operational-tactical ballistic missiles are used to accurately attack enemy strategic objects. , the range of the first confidently reaches 130 km, the last - 220 km. The projectiles have a satellite INS that controls small aerodynamic rudders, allowing you to implement a CEP (circular probable deviation) of no more than 50 m, which turns the previously most ruthless and deadly missile weaponry into a complex and quite humane, high-precision complex of “smart war”.

Quite recently, with the support of Chinese military corporations, Belarus was able to boast of the successful development of a promising MLRS system. High-precision MLRS “Polonez”, equipped with an analogue of the Chinese guided missile A-200 caliber 301 mm, is capable of 8-rocket salvo at the same time hit various fortifications and enemy strongholds at distances around 200 km. But it was the Celestial Empire that became the main “forge” of this kind of weapons, because with Chinese population density and such powerful and not very friendly neighbors like India, the accuracy of the MLRS is put in the first place, and foreign customers look at unmanaged projectiles of standard MRLs as “archaism ".

In Russia, where a special focus of the defense industry is on more sophisticated and sophisticated weapons - the Iskander-E / M OTRK, the modernization of long-range MRL systems is carried out mainly in the key to reworking the warhead (rocket equipment). One of the firstborn of this direction is an unguided rocket projectile 9М55К1, equipped with self-targeting combat elements "Motive-3М", designed to effectively defeat heavy and light armored vehicles in the upper (most weakened) projection. The projectile was brought to the level of readiness by the middle of the 1993 year, and in 1996 entered the artillery units of the Russian army. But work continued in this difficult area, which ultimately led to the emergence of fundamentally new hybrid-type combat subsystems.

September 9 2015 became aware of the advancement of the most interesting project - a missile with a reconnaissance T-90 unmanned aerial vehicle on board an 300-mm NURS 9М534 of the BM-30 Smerch system, as reported by RIA "News»Deputy General Director of Tekhmash D. Rytenkov. From the Russian side, the enterprise NPO Splav is developing the promising projectile, but the Chinese side is also involved in the development of the product.

The details of the development of the 9М534 missile with an unmanned drone on board began to become clear already in the middle of 2011. In particular, it became known that the T-90 UAV installed in the projectile warhead has a fairly compact size and low weight: its length is only about 1,5 m, its wingspan is up to 2,5 m, its weight is 40 kg. Also, some flight parameters of the experimental product 9М61 (Т-90-11) developed by Kazan Enix CJSC are also presented. It is known that after the separation of the container with the UAV from the NURS at a high supersonic speed, the braking parachute opens, the container opens and the drone descends. The small-sized pulsating WFD provides the locking flight of the vehicle at a cruising speed of the order of 130 km / h for 20 - 30 minutes over enemy territory, while the flight height approaches 3 km. The diameter of the fuselage of the UAV - 0,2. The T-90 can be assembled entirely from composite materials, and in the area of ​​the attachment of the HRVD is covered with an additional layer of radio-absorbing materials to minimize the EPR (radar signature). The estimated EPR of the aircraft is about 0,05 m 2, which complicates detection even by powerful radar systems and the MRLS of the Patriot AN / MPQ-53 air defense system, especially if the drone is in low-altitude flight. 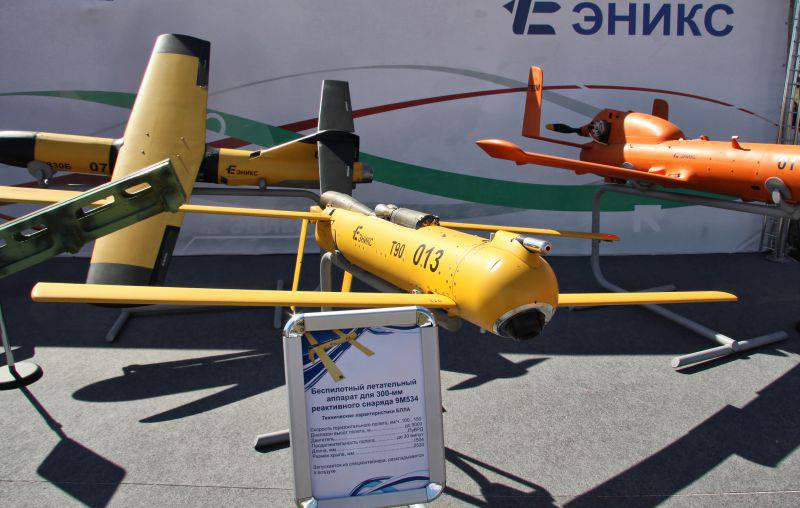 The T90 UAV has a double straight wing of a large area, which allows the device to be planned at altitudes up to 3000 meters. Despite its small size and low EPR, the drone is vulnerable to anti-aircraft artillery complexes optical-electronic guidance systems and for Stinger, Strela, Igla because of the work of the RRDD Photo Rbase.new-factoria.ru

As is known, before conducting artillery preparation or any other attack from artillery systems, near or far territorial reconnaissance should be promptly carried out. MLRS "Smerch", designed to defeat the enemy at a distance 70 - 120 km (depending on the type of NURS), needs a more high-speed means of aerial reconnaissance, because during the approach of a conventional UAV-type "Orlan-10" in the combat area to confirm the coordinates the operational and tactical situation can change dramatically, since it will take him from 35 to 45 minutes (speed 150 km / h). The T-9 drone, installed in NURS 534М90, immediately after leaving the Smerch combat vehicle, picks up a hypersonic speed over 1200 m / s (about 4500 km / h), due to which the drone will be above the target in only 1,8 - 2,5 minutes (considering rocket slowing down on the trajectory). Such flying time will make it possible to most quickly and clearly identify the coordinates of the necessary targets, which will not exactly have time to leave the Smerch MLRS aiming field. A high-resolution gyro-stabilized TV camera with a telemetric image transmission unit over a radio channel will do its job. The use of high-speed NURS as a carrier of reconnaissance UAV also solves another, no less important problem. 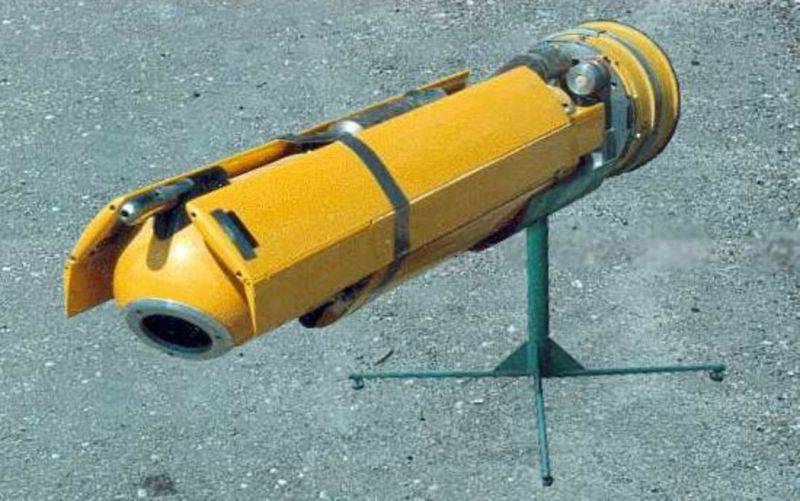 General view of the T90 UAV in a transport and launch container with a parachute compartment. The container is installed at the site of the BSN NURS 9М534 Photo Commons.wikimedia.org

Very often, for reconnaissance of ground targets located at a great operational depth of territory controlled by the enemy, operators of unmanned reconnaissance aviation complexes are forced to "blindly" guide the apparatus over enemy zones, which are "stuffed" with a huge number of highly effective short / medium-range air defense systems, including those with a passive guidance method (IKGSN), it is not so easy to calculate and identify the deployment sites of such complexes, even with the involvement of optical and radio-technical reconnaissance aircraft of the Tu-214R type. The use of the 4-fly projectile 9М534 allows you to solve this problem easily and efficiently. Firstly, its marching section of the trajectory passes at altitudes above 20 - 25 km (an unattainable ceiling for most medium air defense / missile defense systems), and the speed does not at all fit into the framework of "easy" interception of air defense systems such as Buk- М1 "," Spider ", etc. The drone will be able to reach the place of combat use without hindrance.

In addition, I note that the use of such radically improved operational reconnaissance-strike methods leads to a general progress of rocket artillery. As a "equipment" of unguided rockets of the 9М55F family or more long-range 9М542 (export version of the Smerch missile with a 120 km range) can be used not only a small T-90 drone, but also more serious means of aerial reconnaissance can: be a special compact hypersonic aircraft with a large sweep delta wing, capable of conducting optical and electronic reconnaissance at a height of 30-35 km at speeds up to 5M using a compact ramjet There may be a specialized combat stage with a small warhead for hitting remote sea and land targets, or a high-frequency microwave generator for damage to the onboard radio electronic equipment of the strategic and tactical aviation of the enemy. Such combat stages can significantly increase the range of the Smerch known to us from 120 possible kilometers to 200 - 250 km, which will be quite comparable with long-range tactical cruise missiles. 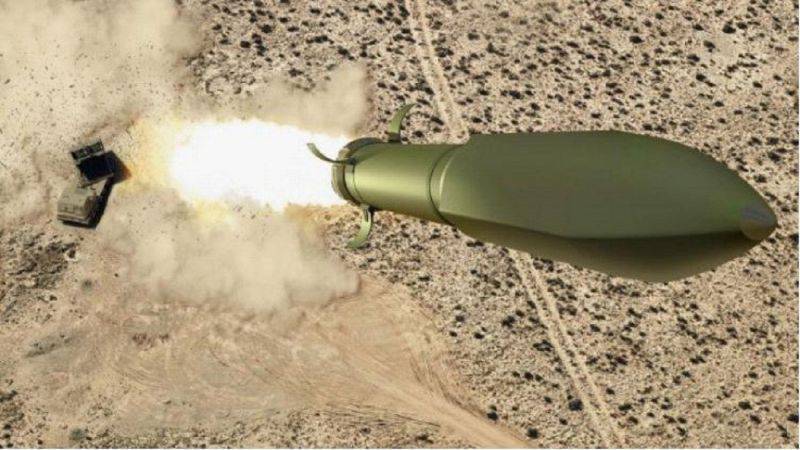 Image of the start NURS М26 with a small-sized GBU-39SDB aerial bomb in the head section. GLSDB project is under development Photo by Janes.com

In the West, the well-known company Boeing and Swedish SAAB are engaged in similar programs for improving the MLRS of the MLRS family. The most recent ambitious project of the company is considered to be an upgraded version of the MLRS MLRS - GLSDB. The system is a standard M270 launcher with a M26 rocket, which is not equipped with a standard M26A2 warhead, but with a special container with a planning GBU-39SDB “Small Diameter Bomb” bombs. The launch stage accelerates the bomb to speeds in excess of 850 m / s and takes them to a height of more than 25 km, where the combat stage is separated and the SDB continues the controlled flight at a given course.

Our Tula NPO Splav together with the Chinese NORINCO and SCAIC are currently working on fine-tuning the already developed auxiliary tactical reconnaissance system for the 300-mm MLRS, which will give a different look at the use of this formidable weapon.