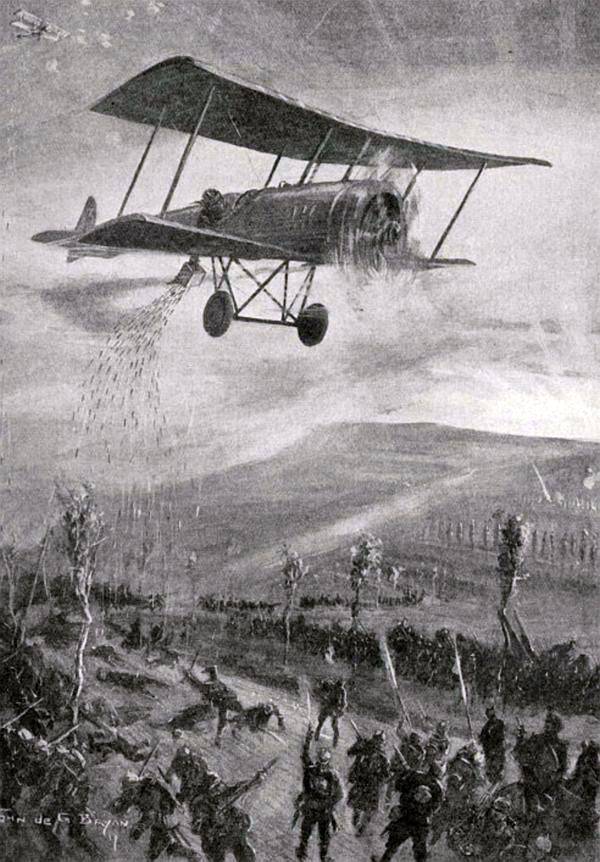 The First World War was, perhaps, truly the first war of the XX century. On this war, humanity had to face such advances in technical thought as airplanes, airships, submarines, machine guns, rapid-fire cannons, explosive bullets, poison gases, armored cars, Tanks... But in addition to these modern types of weapons in World War I, other means of attack and defense were also used, which seemed to come from another era - the Middle Ages. 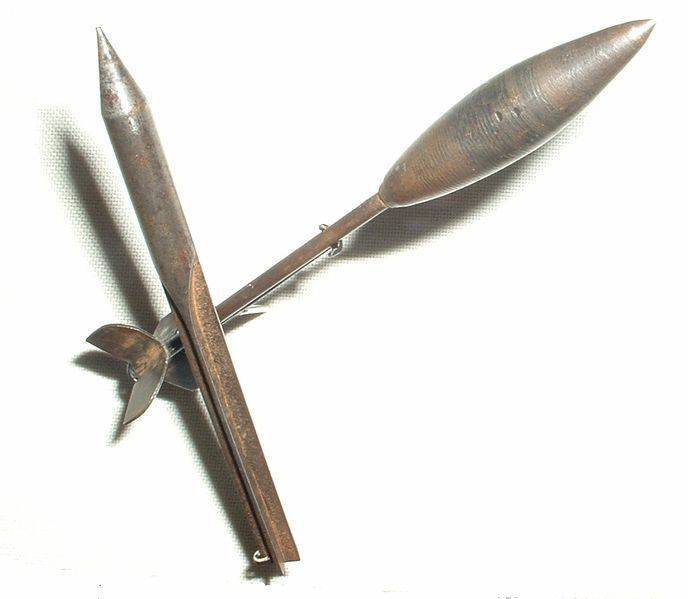 One such exotic species weapons steel fléchette - pencil-sized metal dart arrows that dropped aviation to large concentrations of enemy manpower - infantry and cavalry. Since 1914, Russian newspapers reported cases of the use of this weapon by the Germans, provided photographs of enemy arrows and colorfully described the consequences of using such weapons. So, in the popular Suvorin newspaper “Evening time” exactly 100 years ago, on April 4/17, 1915, an illustration was published on the first page that clearly demonstrates the appearance of the flash drive and how to use them in battle. 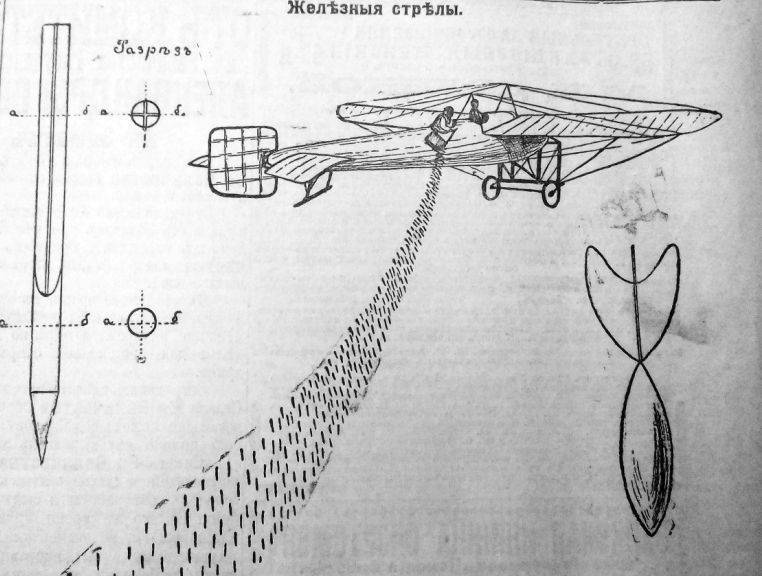 In the note accompanying this illustration, the Iron Arrows report: “Before the war in France, iron arrows were invented to drop them from airplanes. This invention, given brilliant results in experiments, was kept a secret, however, during the very first actions of German air fleet it turned out that the Germans are using these arrows. In the telegram hall of “Evening Time” (52 Nevsky), an arrow is delivered from the Prussian front. The arrow is made of iron, 3 inches long (approximately 13 cm - A.I.) and has the form of a pointed pencil. It is made in such a way that when dropped from a height, it always falls with its tip down. For this, the top two arrowheads are made not round, but tetrahedral, i.e. lightweight on the weight of sawed longitudinal strips. Arrows are suspended to the pilot’s device in special boxes, 1000 pieces each with a retractable bottom. Falling from the height of one verst, such an arrow acquires the strength of a gun bullet. An inscription is inscribed on the boom in the telegram hall: "Invention française, fabrication allemande", i.e. French invention, German production. "

“Even the great-grandfather of our aviators, the famous French inventor Ader, who was not recognized by anyone at the time, invented that metal arrow, which is now widely used as an instrument for aviators,” wrote Nature and People magazine. - Now this arrow has been improved in this way: the aviator takes a metal box, opened from above, in which the 50 arrows are set with the tip upwards. As you know, these arrows are designed so that when falling, they point with a tip down. They fly out of the box, turn and push apart between themselves, thereby automatically scattering rain over a wide area. Each aviator carries with them 5.000 such arrows. (...) The Germans, too, are now throwing such arrows. But for some reason, exclusively on the Russian front. ” 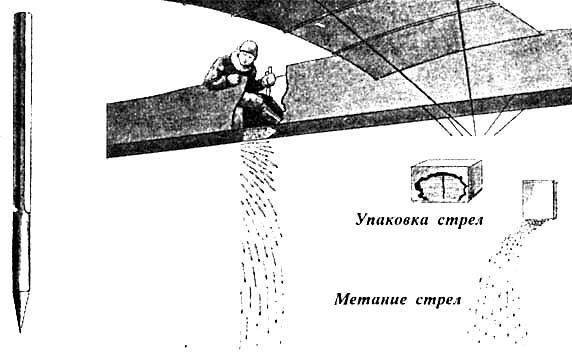 The reason for the use of steel arrows in the era of rapid-fire weapons was the fact that the airplanes of the initial period of the war had no weapons, since they were mainly used for reconnaissance, while the idea of ​​hitting the enemy from the air excited the minds of the military. It was not effective to throw off hand grenades from an airplane or shoot at the enemy from a revolver, therefore such a cheap and most important weapon with a large radius of action, like flashsets, seemed to be very promising in the absence of the ability to conduct aimed fire from the sky. However, the French who invented this weapon themselves used it rather infrequently, while the Germans, having significantly improved the French invention, took it into service, mockingly emphasizing this in the French inscriptions above that “decorated” steel arrows. Awesome sound (sharp whistle), arrows falling from the sky and their striking ability had a strong psychological impact on the soldiers who had been victims of such bombings, as they picked up the speed of a flashet with ease pierced wooden planks up to fifteen centimeters thick. 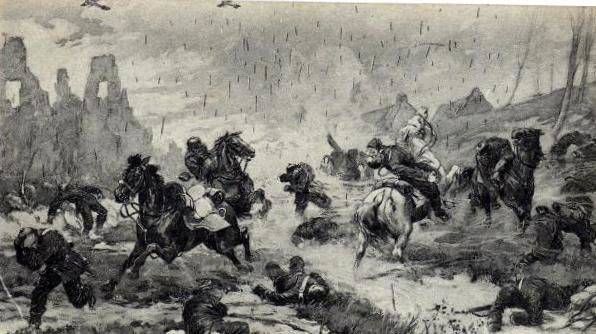 However, the Germans themselves also battered by this type of weapon. You can learn about the impression this weapon made to the troops from the story of the Austrian writer Robert Moosel, who served as an officer in the Landwehr during World War I and almost died in 1915 from a flashset dropped from an Italian plane:

“Above our calm position, an enemy pilot appeared once. (...) ... I heard a sound, and then I only realized that danger was approaching. But at that very moment I already knew: this is an aircraft arrow! There were then such sharp metal rods, not thicker than a carpentry plumb, which the planes dropped from a height; getting into the skull, they probably pierced the person to the soles, but they did not often reach the goal, and they were soon abandoned. That is why I was the first to encounter such an arrow; but since there is a completely different sound from bombs and machine-gun shots, I immediately understood what it was. I was all tensed up, and the next moment I had an amazing, not based on anything real feeling: it will fall! (...) For quite a long time, I alone heard the approximation of this sound. The sound was simple, delicate, melodious, high — the edge of the glass so rings when it is tapped; but there was something unreal about him; you haven't heard anything like that, I told myself. And this sound was directed at me ... ... The sound approaching from above, gained flesh, grew and threatened. "

(Fragment from "Death of the Empire" (2004). Flash footage shown in the film is much larger than real steel arrows from the First World War) 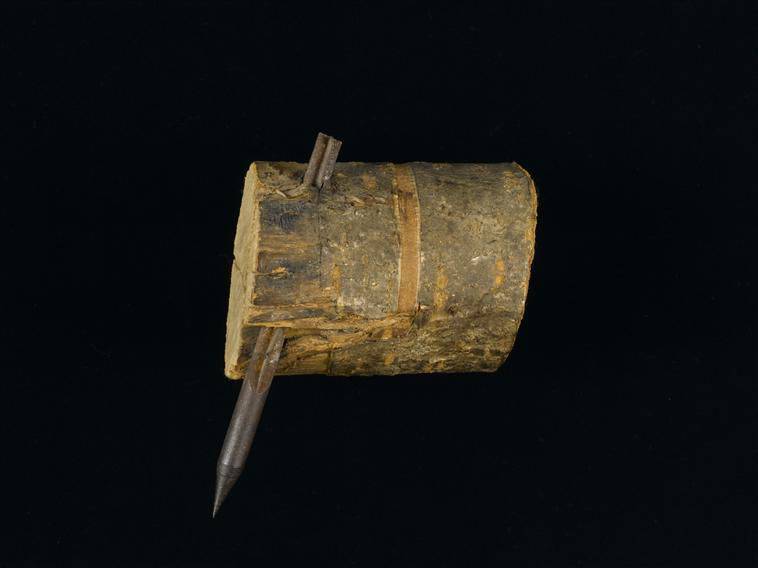 However, pretty soon, due to the rapid development of methods of conducting air combat and bombing the enemy, flashsets began to be supplanted by more effective methods of attack - air bombs, the consequences of ruptures of which were several times greater than the damage inflicted by steel arrows. But flashsets continued to be used at a later time. The Soviet pilot, Lieutenant General of Aviation P.P.Ionov, recalled how this type of weapon was used by red aviation during the Civil War: “The pilots of our detachment conducted continuous aerial reconnaissance and flew several times to attack enemy troops on the march. In these cases, we dropped fragmentation bombs and special arrows and fired machine guns. (...) Lead arrows about ten centimeters long were thrown from a small wooden box. The box had to be kept standing in the cabin, then at the right time turn over and shake out the arrows from it. Shooting was not adjusted. The fact that the arrows hit the target, could be judged by the fled enemy soldiers. From the experience of the First World War, it was known that the invisible and almost inaudible fall of arrows produced a great demoralizing effect on the troops. ” This experience was not forgotten in the years of the Great Patriotic War, at the initial stage of which, not having enough bombs, Soviet planes dropped on the positions of German infantry ... railway crutches. 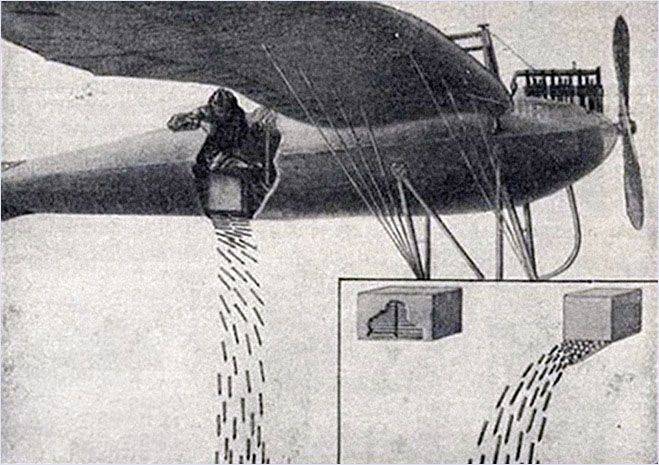 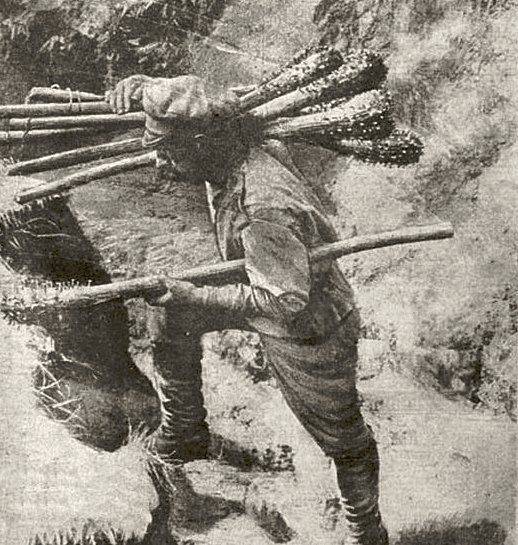 The other “medieval” weapon of the First World War was the Morgenstern (Morgenstern), used by Austrian and German soldiers to protect their trenches. Since pistols and revolvers were relied on only by officers, there were no short-barreled automatic weapons, and it was extremely inconvenient to fight back in a narrow trench from an advancing enemy with long rifles with bayonets attached to them, but the German and Austrian soldiers remembered the same began to produce, enhancing their striking effect with sharp nails. Pictures of such trophies were published more than once in Russian periodicals, surprising the reader with the “wildness” of these “military innovations” of European nations. 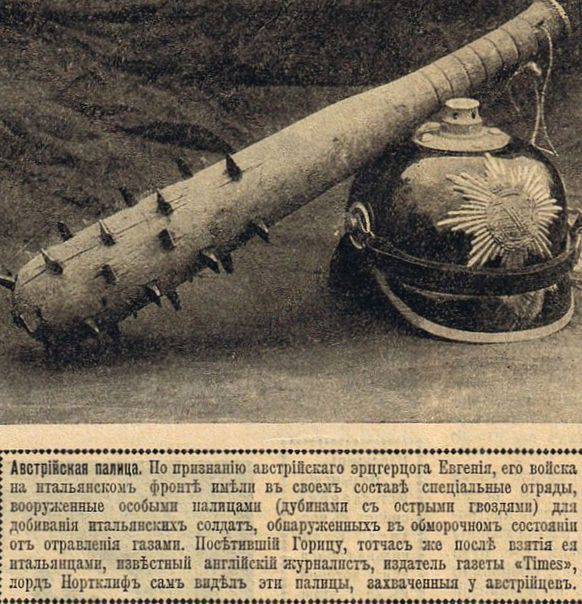 We are in Yandex Zen
Magnum .44, Clint Eastwood and other big
Victory weapons. "Degtyar Infantry" - machine gun DP 85 years
18 comments
Information
Dear reader, to leave comments on the publication, you must to register.