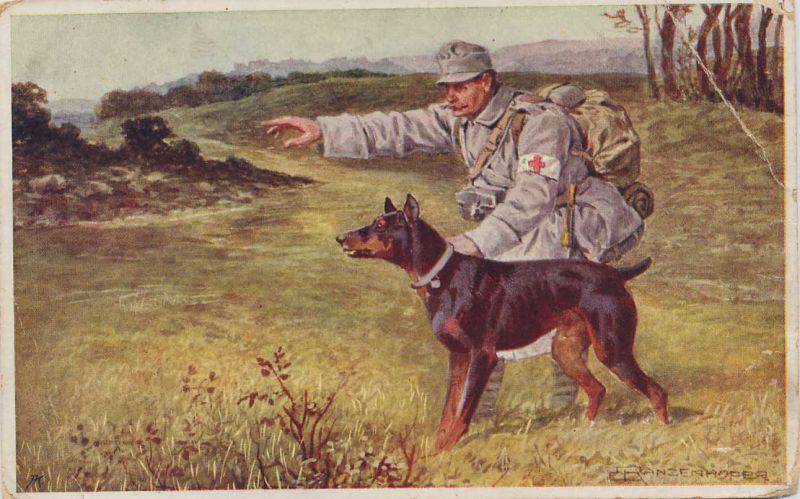 In the First World War, in addition to the millions of people who participated in it, animals were also drawn into it. In addition to horses, thousands of mobilized in cavalry and pigeons that convey valuable messages, dogs became the compelled participants of the war, whose share in the first place was the sanitary service. Moreover, unlike the opponents - Germany and Austria-Hungary, who widely practiced dog-orderlies, the use of dogs at the front for the Russian army was an innovation. 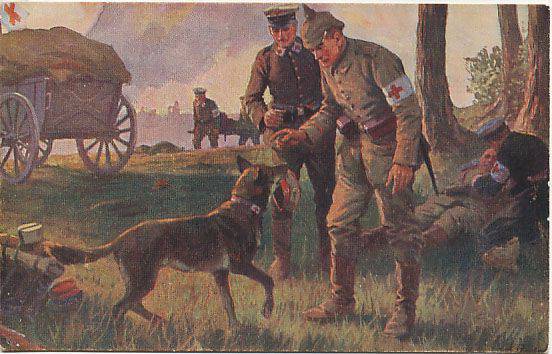 Exactly one hundred years ago, in 1915, in the capital of Galicia-Lviv, liberated from Austro-Hungarian troops, a “School of military guard and sanitary dogs” was created, headed by the former head of the evacuation department in the military health department of the South-Western Front, state councilor Lebedev, who had experience training police dogs. True, in connection with the imminent loss of Lviv, the school had to be moved to Kiev, where the head captain, Prince Shcherbatov, became her chief. In the autumn of 1915, the school staff was officially approved and the first Russian instruction on the use of dogs in the army was published, which, as historian Pavel Aptekar reports, said: “With proper treatment and good training, a dog can become an indispensable assistant secretly at the forefront to detect of enemy reconnaissance and subversive parties, for transmitting reports in the event of a rush of telephone communications under heavy enemy fire, and for searching and retrieving wounded soldiers from the battlefield. And since September, 1915, specially trained instructors and dogs, distributed on the regiments of the Russian army, began to serve. As a rule, these were shepherd dogs, airedale terriers, Dobermans and hounds.

And soon the first responses appeared on the service of new recruits. Petrogradsky monarchical newspaper "Zemshchina" in a small article "Dog-orderlies at war" informed its readers:

"In the" voucher "of the vanguard profit new" staff ": five health dogs. It was as if the dogs immediately sensed the fighting atmosphere, and with each new line of the gun they were spinning the guard with their ears, trying to rush forward. Somehow a quiet, strangled scream, they ask for freedom.

“They never bark,” explains a medical orderly accompanying the dogs. “Even when they are separated among themselves, this will be secret.”

After the fight, when the work of orderlies began, the dogs were released. With some special seriousness and peace of mind, they gave easy carry-over bags to wear, waiting for a sign to rush forward. After jumping the wire barriers that remained here around the farm, after the Germans, the dogs disappeared into the darkness of the night. Twenty minutes later, appearing from somewhere out of the darkness, Buf returned, persistently pulling the orderly and demanding that he follow him. 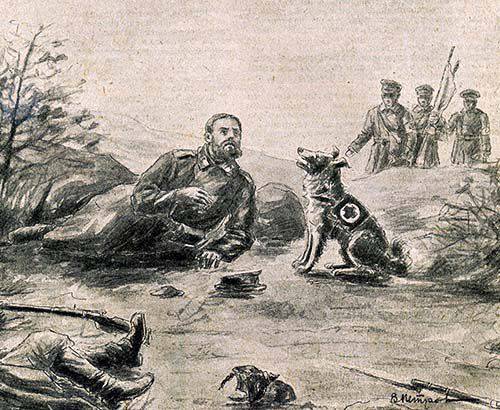 “I follow him,” says the orderly. Over bumps and gully just keep up with him. It leads to the forest itself. He shouted at the voice: 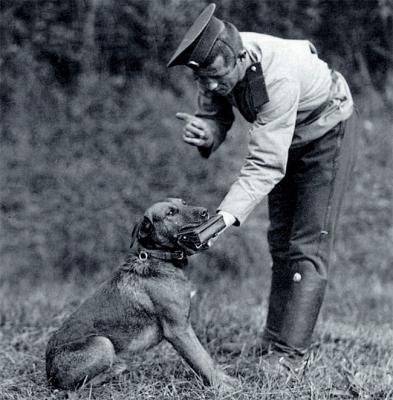 I hear: someone moans, sighs. Illuminated flashlight, I look. Three of the wounded are almost nearby. He gave them a drink from a flask, began to dress up, and I myself think: how can I be with them? I wrote a note to send a gig, put it in a bag to the dog and let it loose. Turned around, turned around near me, and she herself looks at me like that.

A few minutes later, Buff came running again to the dressing station. Come running and waiting. They read the note, took him on a leash again, and in his tracks sent two gigs.

The other dog, who had returned from the battlefield, had suede gloves in his transfer bag. Rushed in her wake. The dog led on a dark plowed field, to the ditch, where the wounded officer lay. He tried to get himself to the dressing station, but lost power and fell. When the dog came running, without being able to write a note, he shoved blood-filled gloves into her bag. 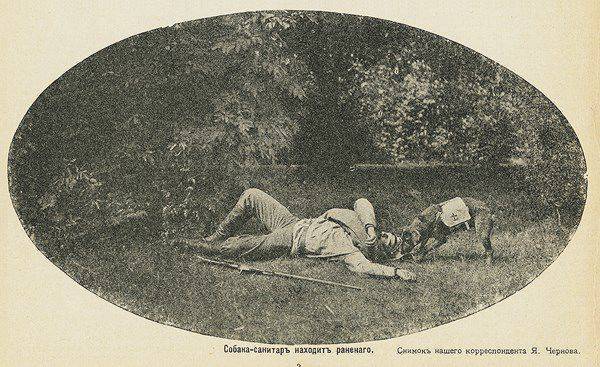 During the night, only these two dogs tracked down nine wounded. Three other sanitary dogs worked directly with the orderlies. Thanks to them, continuous communication was maintained between the battlefield and the dressing station. They constantly resorted to the point, bringing notes: "Send iodine", "Send dressing material", "Send gigs for so many wounded", "Do not forget to send water for drinking". One of the rescued soldiers wraps a dog around the neck and kisses her firmly on the face. The dog flounders in unexpected hugs. He says: “My death would have come. I would lie and lay in the forest, - sometime ours would have found me ...” 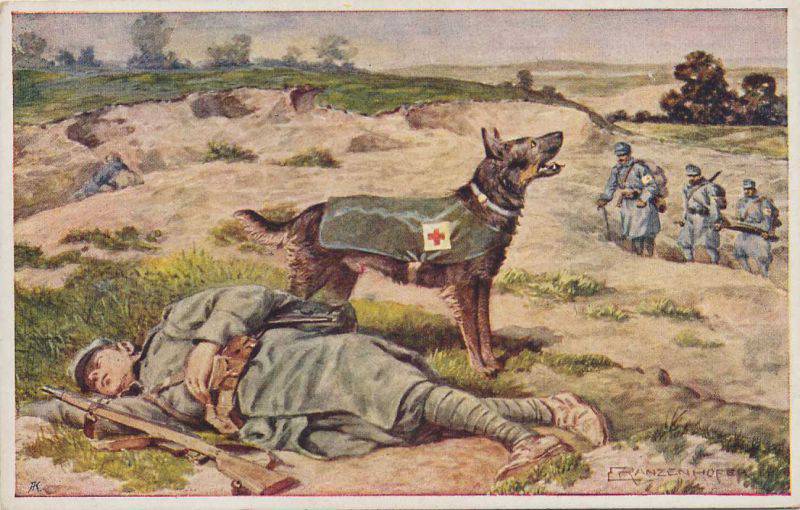 In another Petrograd edition - the magazine “War” - the story of a wounded soldier was placed, who for the first time had a chance to run into an orderly dog: “I lay on the field late at night and moaned. I hear a rustle, I look around: a dog stands beside me and looks at me. Then she approached, lay down on the ground and froze. I wanted to get a bandage, but my hand was badly hurt, and I could not do anything. Then the dog began to bark, at first quietly, then louder and louder, and finally, howled. When the orderly approached, she shook her head in my direction and fell silent. The orderly made a dressing for me, uttered a word and told me to go after the dog, which led me to the dressing station. ”

The fact that the experiment was a success was also written in official communications. So, the commander of 3 of the Life Guards Rifle Regiment, Major General AVUsov, at the beginning of 1916, noted: “In view of the undoubted benefits brought by dogs when performing communication services, I ask you not to deny sending six dogs to me. Over the past period, dogs have been used repeatedly and always with success and benefit in delivering reports. But now the number of dogs has decreased due to the loss in battles. ” And since such reviews were not unique, the command of the divisions and armies of the Southwestern Front stated: "dogs sent from a special school of guides bring undoubted benefit." They decided to transfer the experiment to the whole army, deciding to create special regimental teams for 8 dogs for the infantry regiment and 6 for the cavalry. But the collapse of the front, which occurred in 1917, did not allow the introduction of the practice of using dogs in the entire Russian army.

Ctrl Enter
Noticed a mistake Highlight text and press. Ctrl + Enter
We are
The most faithful friend. Dogs in the service of people from antiquity to our timeDogs on the fronts of the Great Patriotic
6 comments
Information
Dear reader, to leave comments on the publication, you must to register.