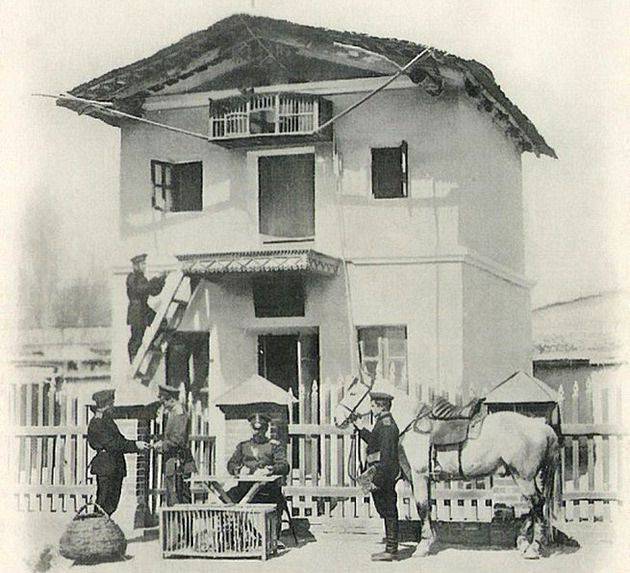 In the First World War, as we have already written, in addition to the millions of people who participated in it, animals were also drawn in: horses, dogs and pigeons. Moreover, the role of birds was not the last. Despite the fact that by this time progress had given mankind such technical means as radio, telegraph and telephone, the role of the military post pigeon service was still high.

Pigeon stations were introduced into the Russian Army by order of the Minister of War, P.S. Vannovsky, in the 1880s. It was assumed that the main task of the feathered postmen would be to maintain contact with the besieged fortresses. In this regard, the post-pigeon stations were arranged in the fortresses and in other locations under the instructions of the main engineering department. To maintain the appropriate breed of pigeons, a pedigree depot was established at the pigeon station in Brest-Litovsk, each station had special pigeon guards, and each pigeon had a military pigeon postmark, since the birds who were in the army service were considered state property.

In 1895, one of the first such stations was created by a lieutenant from the Turkestan Military District, Grigory Lalekin, whose feathered creatures delivered information from Tashkent to military units and to headquarters. An especially wide communication by means of pigeons was during maneuvers: the troops coming out of the city took the birds with them and sent messages with them as needed. 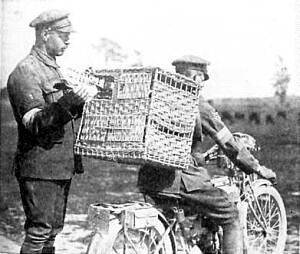 During the Russo-Japanese War, the pigeon connection also continued to be actively used. A military pigeon station with more than 70 trained pigeons was set up in Port Arthur. Since the beginning of the war, these pigeons were taken from Port Arthur to the pigeon house of the Zaamursky district of the border guard to communicate with the besieged fortress. And after the end of the war with the Japanese, two more stations were built near Vladivostok to keep postal pigeons and a service company barracks. Thus, before the start of World War I, the Russian army had already gained some experience in using mailing pigeons for military purposes, and pigeon stations were erected at many locations of our troops and especially fortresses: in Kovno, Warsaw, Ust-Dvinsk, Libau, Osovets , Novogeorgievsk, Brest-Litovsk, Baranovichi, Ivangorod, etc.

During the First World War, both allies and opponents of Russia actively used doves. And one of the British postal pigeons who had the number 888, delivered several hundred messages and fell during the execution of the next task, even was posthumously awarded the rank of colonel of the British army. 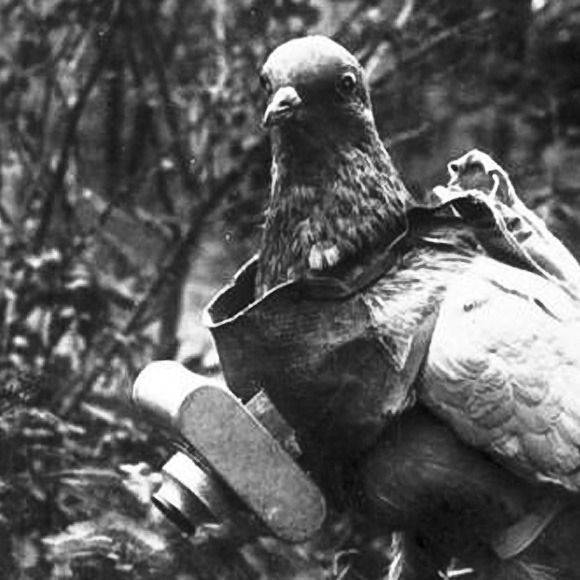 Pigeons were also used for espionage. Back in 1903, a pharmacist from Bavaria, Julius Neubronner, developed a method of using pigeons for aerial reconnaissance. A miniature camera was attached to the bird’s rib cage, the shutter of which worked automatically every 30 seconds. This invention, naturally, became interested in army intelligence, and soon a “Bavarian pigeon corps” appeared in Germany, using pigeons for military purposes. However, since the flight path of the bird was far from always predictable, in this capacity it was soon replaced by aerial photography and airplanes. But the pigeons continued to "spy", as far as the front line from the enemy's territory was important information.

In this regard, a note a hundred years ago from the “Stock Exchange Gazette” is noteworthy, in which it was reported that “espionage adapts this symbol of purity and innocence for its vile purposes and pigeon”. “The telegraph has already announced that over 200 delivered pigeons have been delivered to Kiev,” the article said. - These pigeons were taken from the Galician "peaceful" inhabitants, who through their means had been tied down with Vienna and other cities for the purpose of espionage. The role of pigeons was revealed by our detective department. ” 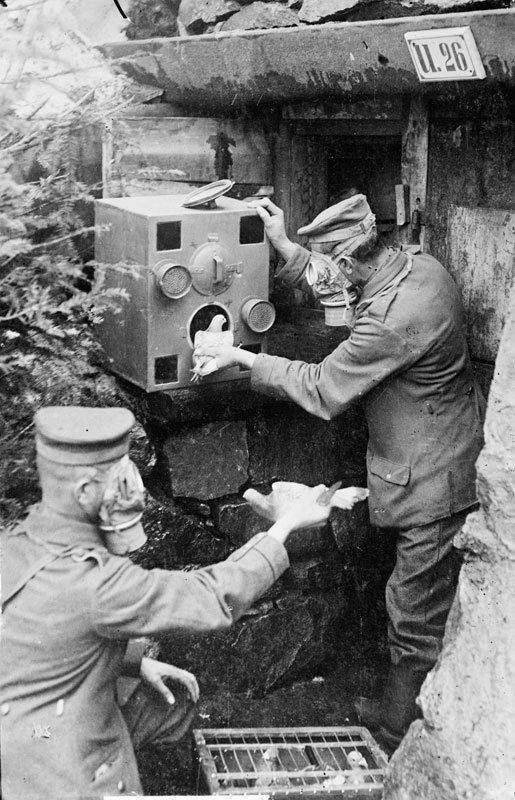 Wanting to find out what role the pigeons play in the conditions of the First World War, the publication turned to a military officer for pigeon mail for a comment: “With the advent of new improved ways of transmitting messages, some were inclined to think that the role of pigeon mail was played. It was thought that the radio and telegraph would kill the pigeon mail. In fact, it turned out quite differently. No matter how the technology has been improved, the device of a wireless or field telephone, however, requires well-known technical devices that can be easily discovered and are irrefutable evidence for a spy. The pigeon is another matter, the bird is meek and peaceful. How do you know that this particular pigeon, unlike its other relatives, carries its treacherous service under the guidance of a "peaceful" inhabitant? For pigeon mail, only some breeds of English pigeons are suitable. Usually, pigeons unmistakably take a distance of 80-100 versts, rarely more. The news, which one wishes to send with a winged postman, is embedded in a light metal tube (most often aluminum) and is attached by means of a ring to the bird's foot so as not to hamper its movements. During the maneuvers, military pigeons were tested many times and gave excellent results. ” 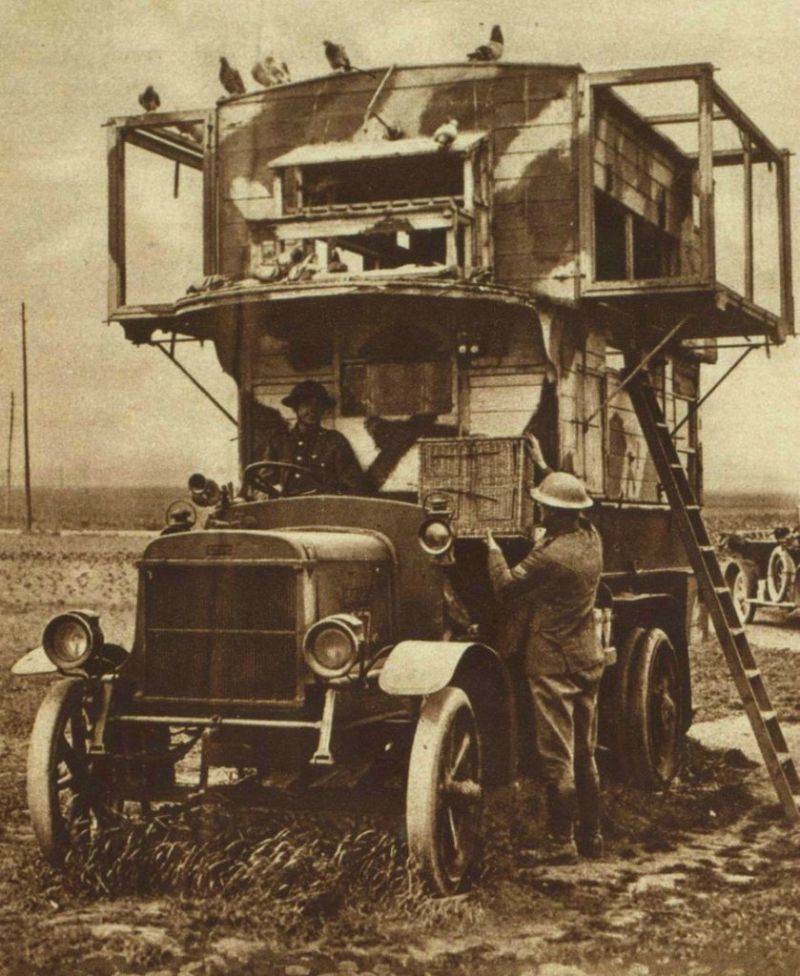 Our British allies also used doves for reconnaissance purposes. General N.S.Batyushin, a well-known Russian counterintelligence officer, recalled: “In May 1915 for the first time, the Germans set up a landing of military spies descended in a staging area of ​​the army, equipped with postal pigeons to send messages. They were senior French officers who wore French and German uniforms under civilian clothes. The first is in order to pass for a prisoner of war, and the second is to mislead the Germans. In 1915, nine air spies fell into the hands of the Germans in this way (...) Usually each such spy was equipped with six post pigeons. ” 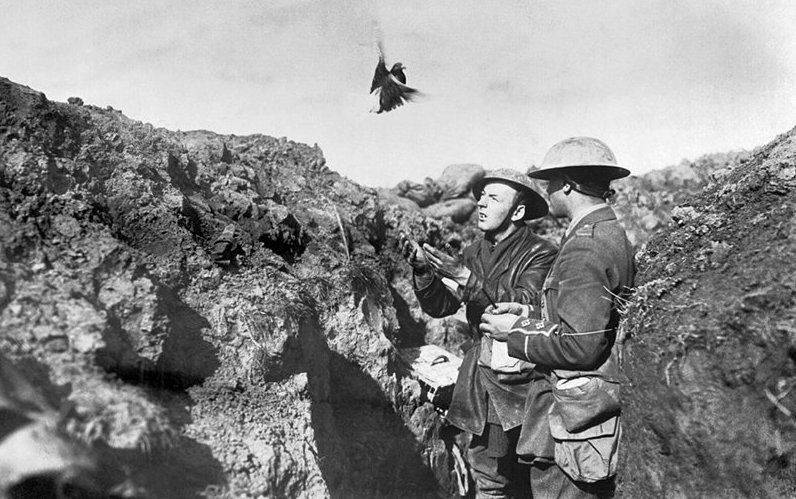 It is also known that by the end of the war, the British threw baskets with specially prepared pigeons into the German rear, containing instructions on how to handle pigeons, food for them, money, a questionnaire, a sample report and an appeal to the local French who found themselves in the occupied territories: " The Bosch resistance to the Allied offensive comes to an end. The Allies have already cleared part of the French territory. To continue the offensive, it is necessary that the allies be well aware of the enemy’s disposition and his intentions ... By sending reports you will render your country a valuable service and bring an end to the war. ” 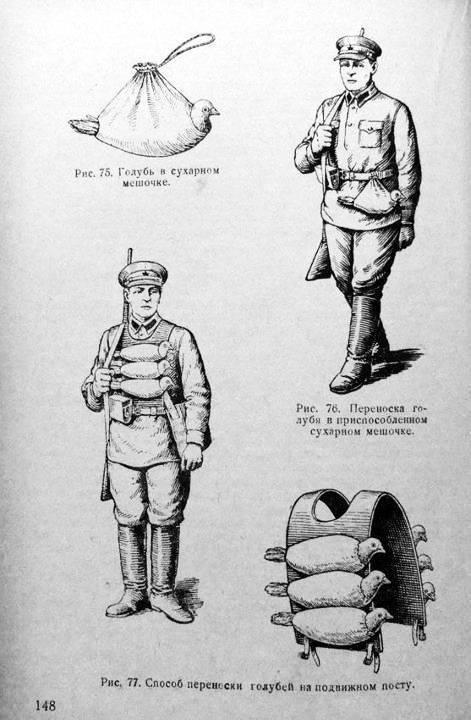 As for Russia, the military-pigeon post survived the revolution, and then continued to be used during the Civil War, both white and red. After the victory of the Bolsheviks, this experience of Tsarist Russia was also not forgotten, and the sweat pigeons continued their service to the Fatherland. Establish military-post pigeon communications in the Red Army happened to old specialists. Among them was the former colonel of the tsarist army, ND Andreev, who was engaged in pigeon communications in the First World War and was assigned by the new government in 1929 to the Higher Courses of Poultry Breeding at the Zootechnical Institute, and later became Deputy Head of the Red Army Scientific Plowing Institute.

We are in Yandex Zen
To the 300 anniversary of courier mail service of the Armed Forces of the Russian Federation
Military pigeon connection in the Red Army on the eve and during the Great Patriotic War
4 comments
Information
Dear reader, to leave comments on the publication, you must to register.