October 17 2015
5
The use of air forces on the eve and at the beginning of the First World War confirmed the limitations of the effectiveness of light field and heavy artillery fire on aircraft. For effective fight, first of all with aerodynamic means of air attack, the special tools installed on automobile platforms were required. 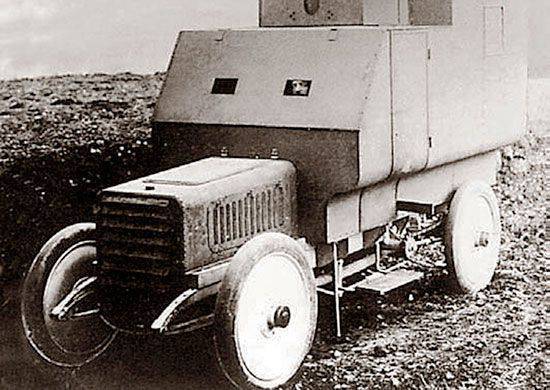 Anti-aircraft armored car "Ehrhardt", Germany. 1908
The first to create such mobile tools, started the German and French experts. If in France for the anti-aircraft fire adapted 47-mm cannon Schneider system (sample. 1897), then Germany began to design tools of various calibers. Within the walls of the Rhine Metal Plant, the development of automotive anti-aircraft installations was carried out simultaneously in three versions: armored, semi-armored and unprotected armor [1]. 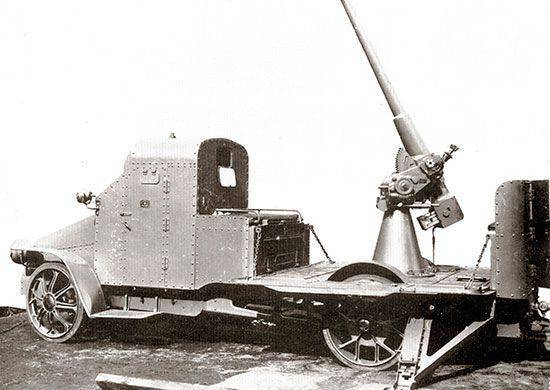 Automotive anti-aircraft gun model 1914 g.
According to experts, an increase in armor weight directly reduced the ballistic characteristics of the guns. Thus, bringing the total weight of an automobile installation equipped with a Schneider 47-mm cannon and weighing up to 6 tons using armor made it ineffective when firing air targets. A semi-armored car setup with 71,1-mm Krupp system guns turned out to be a big winner here, but during the shooting it was not able to protect the servants who were vulnerable on the battlefield.

In Russia, the main focus was on the creation of an armored vehicle installation with an anti-aircraft gun caliber 76,2-mm. It was developed by the Officer Artillery School in the person of the officer of the permanent staff of the Guard Staff Captain V.V. Tarnowski, who in 1912 defined the basic requirements for this type of gun [2]. But, not having received the approval of his invention from the Artillery Committee of the Main Artillery Directorate (Artcom), he turned for help to the Society of Putilov factories. The plant management agreed with the designer’s arguments and united previously independent work on the production of a special anti-aircraft gun into a common project, later called the “Tarnovsky-Lender Tool” (by the names of its developers). The basis of the newly constructed guns continued to be 76,2-mm lightweight field gun mod. 1902 d. Later, having received full approval from the Commission for Testing Field-Firing Artillery, the design of this anti-aircraft gun was approved at the Main Artillery Directorate (GAU). In June, Artcom's 1914 ordered the Putilov Plant to manufacture the first batch of such guns in the number of 12 units [3]. In August of the same year, the plant began to assemble them. The instrument in question was constructively a thumbnail installation, which could be mounted on various platforms (road, rail and stationary). Reach in height (up to 5 km), horizon (up to 8 km) with practical rate of fire (12 - 15 shots per minute) and circular shelling made the anti-aircraft gun quite suitable for successful combat with low-speed aircraft at heights up to 4 km. 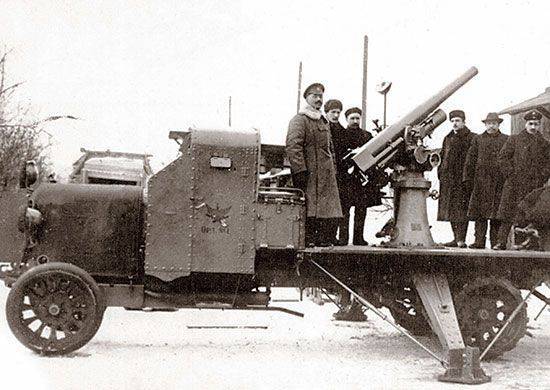 The creators of the anti-aircraft gun model 1914 g. (Leftmost captain V.V. Tarnovsky).
The first four guns, officially named "3-inch anti-aerostat gun mod. 1914 Putilov factory on an automobile installation ”, were assembled at the end of 1914 and installed on 5-ton cars of the American company“ White ”, specially made for them by the Russian-Baltic Carriage Works. At the same time, on the proposal of the General Directorate of the General Staff (GU GSH), the Military Council under the Minister of War approved the staff of the Separate Car Battery for Aerial Firing the fleet and determined "to form (according to the aforementioned state and the calculation of the number of ranks of the war time battery) [4] one automobile battery and contain it for the entire time of the present war" [5].

The proposal to lead the battery to be formed was received by guard staff captain V.V. Tarnovsky. This assignment was justified by the need to “further improve the system based on combat experience” [6].

6 (19) March 1915. He reported on the formation of the first 4-x Cannon Separate car battery in the Russian army for firing on the air fleet:

“5 of this March, the batteries from the Putilov 4 plant, mounted on the vehicles for firing at the air fleet, came to the battery.

These guns have already been tested at the main artillery firing range for shooting and the tests went well. Speaking of this, I ask you to give the order for the school and to report to the General Directorate of the General Staff that:

The 1 / battery should be considered formed by this 5 of March;

2 / landing on the railway to perform at the theater of military operations can be made 10-th March;

3 / that a battery consisting of one class I or Class II car, two heat cabs on the number of 78 lower ranks, 12 platforms on the number of 12 cars and one covered freight car for motorcycles and luggage, the total 16 cars and platforms will be required for loading the battery.

The composition of the echelon: 3 officer, 1 class rank, 78 lower ranks, 12 cars and 4 motorcycle. 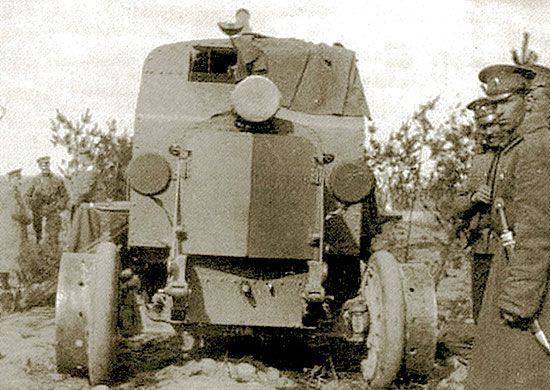 Separate automotive anti-aircraft battery captain V.V. Tarnovsky at the front.
During the formation of the anti-aircraft unit and during the practical activities of V.V. Tarnovsky developed and issued a number of guidelines (manuals on anti-aircraft artillery): “Battery Training Ordinance”, “Automotive Battery Firing Rules for Air Fleet Shooting” and “Field Shooting Tables” on rubber and transferred them to the General Directorate of the General Staff and Main artillery control for use [7].

For the first time, it was proposed to hit enemy aircraft with not single shots, but with breaks of several shrapnels at the same time, forming a whole sphere of damage. In the explanatory note to the specified documents V.V. Tarnowski described in detail and analyzed up to ten different cases from the experience of shooting at aircraft for the first time months of the war. In the future, GAU ordered to publish the works of V.V. Tarnovsky separate circulation [8].

During the combat use of mobile batteries, these rules were substantially supplemented. So, a corrective shot was fired at the airplane entering the affected zone at the maximum range, and then a quick fire was fired (to kill). Correction of fire and determining the accuracy of shooting was carried out by observation from a position through binoculars (pipe), as well as using side observers sent from the battery to a considerable distance and having constant telephone communication with the command. On certain days when aviation the enemy was most active, the consumption of battery shells exceeded 150 rounds. 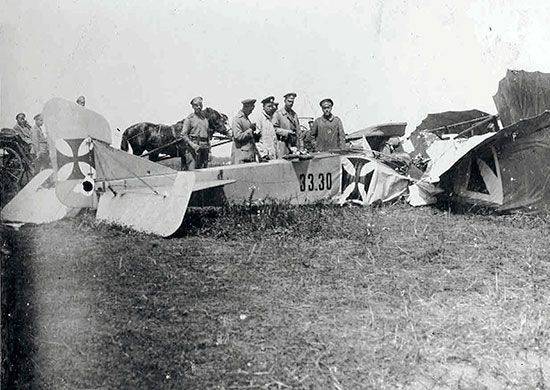 Downed German aircraft
12 (25) June 1915. The first downed air target appeared on the account of mobile anti-aircraft batteries. The personnel of the “Separate car battery for firing at the air fleet” in the area of ​​the town of Pultusk (Kingdom of Poland) in a short-term battle shot down a German aircraft [9].

On the basis of the order of the Supreme Commander from 17 (30) of August of the same year, the unit No. 704 of Captain V.V. Tarnowski was transferred to a new temporary staff. The total number of personnel brought to 88 people (including 5 officers). The rolling stock of the battery has been increased to 14 cars and 4 motorcycles [10]. 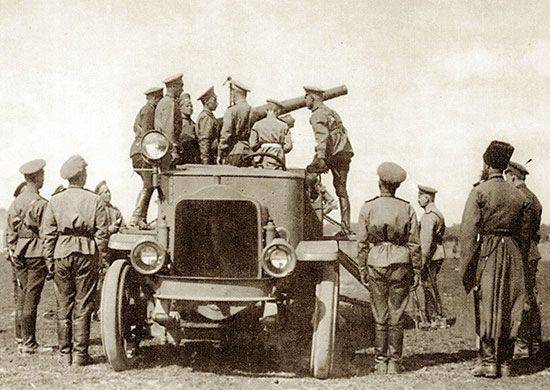 Inspection of anti-aircraft guns by Emperor Nicholas II. Summer 1916
In the autumn of 1915, the order of the Chief of Staff of the Supreme Commander for number 172 took place:

"At the time of hostilities:

1) To form the 2-th separate car battery for firing at the air fleet, assign to it the staff declared in the order of the Supreme Commander from 17 of August of this year as 704.

2) Assign the name “1 separate car battery for firing on the air fleet” to the existing same battery. 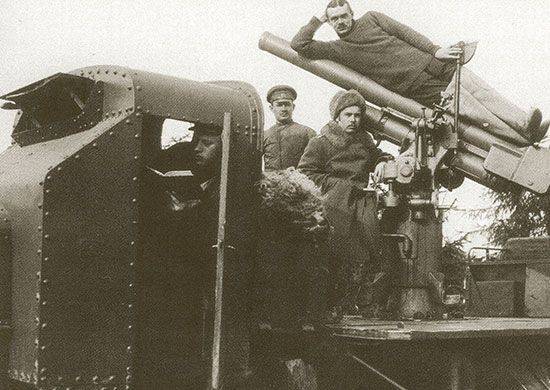