In Syria, destroyed the leader of a terrorist group Abu Bakr Ash-Shishani

October 15 2015
74
Various sources of information, including Syrian, report that in the province of Homs, a point strike inflicted aviation VKS of the Russian Federation, a group of militants of the odious movement "Ahrar al-Sham" was destroyed. In the message RIA News and correspondents "Komsomolskaya Pravda" it is said that among the liquidated are the leader “Ahrar al-Sham”, a native of Chechnya, Abu Bakr Al-Shishani. 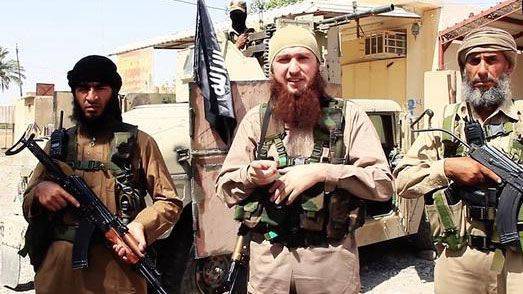 RIA News:
On October 14, as a result of a strike by Russian aviation in the province of Homs, a militant group was liquidated along with the leader of the terrorist group Ahrar Al-Sham, a native of Chechnya, Abu Bakr Al-Shishani.

It should be noted that Al-Shishani was appointed the leader of this group relatively recently - after the destruction of Omar Mustafa, formerly head of "Ahrar Al-Sham", by divisions of the Syrian government army. In addition to Omar Mustafa, the Syrian special forces also liquidated his closest ally Abu Anas.

For your information:
“Ahrar Al-Sham” is one of the wings of the terrorist group “Jaish al-Fatah”. Militants of this wing were the most active terrorist activities in the provinces of Homs and Idlib. Last year, the Pentagon reported that air strikes of a “coalition” led by the United States were attacking the militants of the grouping. However, for some unknown reason, after these airstrikes, the militants took control of all new territories.
Ctrl Enter
Noticed a mistake Highlight text and press. Ctrl + Enter
We are
ARMY-2016. Cluster VCS. Part of 2. Space is space!
74 comments
Information
Dear reader, to leave comments on the publication, you must to register.