October 16 2015
106
Having discussed the current situation in the Russian economy, today it is worth paying attention to the state of affairs in the economy of the Ukrainian neighbors. The main reason is that the Ukrainian neighbors, or rather those who call themselves the country's authorities, having lost all sense of proportion, are already beginning to threaten Russia if the Russian Federation does not decide on the restructuring of the Ukrainian billion-dollar debt before October 29. Here it is immediately worth clarifying that if the position of Russia turns out to be unshakable, and it’s still in the matter of Ukraine’s returning its debt on Eurobonds, and if none of the external “investors” help Ukraine financially to repay the debt to the Russian Federation, then the Ukrainian economy faces a festive New Year default. Moreover, the period December 3 - January 2015 accounts for the payment of debt obligations for gas, about which Kiev lately tries not to talk about at all. So, will Kiev be able to repay 2016 billion dollars to Russia and avoid a default with fireworks without regular (or extraordinary) external borrowings?


It would be possible to immediately answer “no”, but here specific facts are important, which should be presented to understand the situation. Such facts (facts of the state of affairs in the economy of Ukraine) partly publish the Ukrainian Goskomstatwhich, there is an opinion, even what is indicated in his report, is trying to somehow embellish it so as not to frighten the people with truly nightmarish indicators. Indicators (for January-September 2015 of the year, including comparative data for previous periods of time) are presented below, and it is unlikely that there is anything at all possible to somehow retouch in pink tones, which would be so desirable for ukrovlasts ... 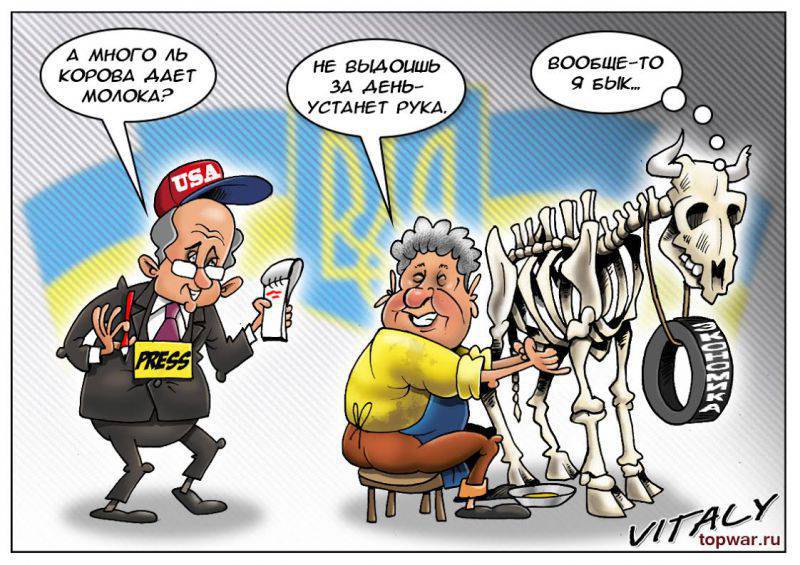 The first thing that strikes the eye of the State Statistics Committee of Ukraine is the degree of depreciation of fixed assets. In 2013, depreciation was 77,3%, and 2015 had time to pass for 83,5%. This is not just a critical value, it is already something Zakriticheskogo, because with this level of depreciation of fixed assets, including, primarily production, no economic attempts (even if they are carried out by brilliant economists, and this is clearly not about Ukraine) will not give the result by definition . The production system, as they say, is outdated through and through, and at least partially recovering it will take a) years, b) multi-billion investments. Neither one nor the other in the current ukrovlastee not.

To compare with what - the degree of depreciation of fixed assets (funds) of the Russian Federation, according to Federal State Statistics Service, is about 48%. The percentage, of course, is also impressive, but in recent years the figures reflecting the aging process of the main industrial tools have stabilized.

Ukrainian Industrial Production Index (for the first 9 months of the year) compared to the same period last year fell by 18%.
GDP fall rate (data for the second quarter) - 14,6%.
Index of agricultural production - minus 5,8%.
Construction Products Index collapsed on 24,6%.
Freight volumes decreased by 16,2%.
Passenger traffic fell by 13%.
Real disposable income (again, in comparison with the 9 of the first months of 2014, of the year) it fell by as much as 34%.

The State Statistics Committee of Ukraine provides data on the reduction livestock of all types of livestock, including cattle (on average 4-5%), falling production levels main crops: potatoes - by 12,6%, grains - by 1,2%, sugar beets - by 56%! The only crop for which production growth is demonstrated is sunflower seeds (3,6%).

Against this background, a frank mockery is the statement of the representatives of the American delegation, which arrived for consultations at the Ministry of Economic Development of Ukraine. The American guests (and these were representatives of the American companies "Cargill", "NCH Capital", "Citibank", "John Deere Ukraine", "DuPont Pioneer") stated that they were "completely satisfied with the progress that has been observed in Ukrainian agriculture" . If the Americans talked exclusively about sunflower seeds, then it is understandable ...

The delegation also included representatives of the Westinghouse company, which transparently hints that Ukraine seriously intends to switch to the use of American TVELs for nuclear power plants built in Ukraine according to Soviet projects. It is worth recalling that the series of tests of fuel rods produced by Westinghouse at Ukrainian NPPs has repeatedly led to emergencies.

A special “positive” is added to Ukraine by the World Bank, which took and, as a last resort, worsened the outlook for inflation. If you believe the analysts of the World Bank, inflation in annual terms in Ukraine will be at the level of 50%. This is the level at which it is not at all necessary to talk about any productivity of small and medium-sized businesses, but we have to say that for the USA everything goes according to plan in Ukraine - fixed assets are aging, the purchasing power of the population is falling, enterprises are becoming cheaper, which means , they can actually take for nothing the American "friends of Ukraine".

Naturally, such "success" dictates the same Poroshenko the need to urgently raise his rating from the floor. Forgive my God, image-makers have guessed: “let's, Peter Alekseevich, you, like Putin, will sit in the fighter's cabin - suddenly this is some kind of secret magic ritual, after which the president abruptly becomes successful, and the economy rushes up ...” And on what aircraft plant Yatsenyuk? ..

By the way, Ukrainians need to watch their president more closely - otherwise the “ritual” in his case will not work, and the next time Pyotr Alekseevich, having made a farewell circle over the airfield, at a low-level flight will fly away for a cordon for permanent residence ...

Ctrl Enter
Noticed oshЫbku Highlight text and press. Ctrl + Enter
We are
Situational analysis of the death of the MH17 flight (Malaysian Boeing 777), made on the basis of engineering analysis from 15.08.2014Results of the week. "Who you are lucky, in fact, and will carry a cock, and such a bird as you, I, too, will rush!"
106 comments
Information
Dear reader, to leave comments on the publication, you must to register.