John Kerry, the liberator of Russia

October 16 2015
58
American Secretary of State John Kerry, speaking at a meeting with teachers and students of Harvard, said that the United States is not happy about the negative impact of low oil prices on the Russian economy. He also noted that sanctions against Moscow could be lifted, since the fall in oil prices, combined with sanctions, created difficulties for the Russian economy. What a touching concern! 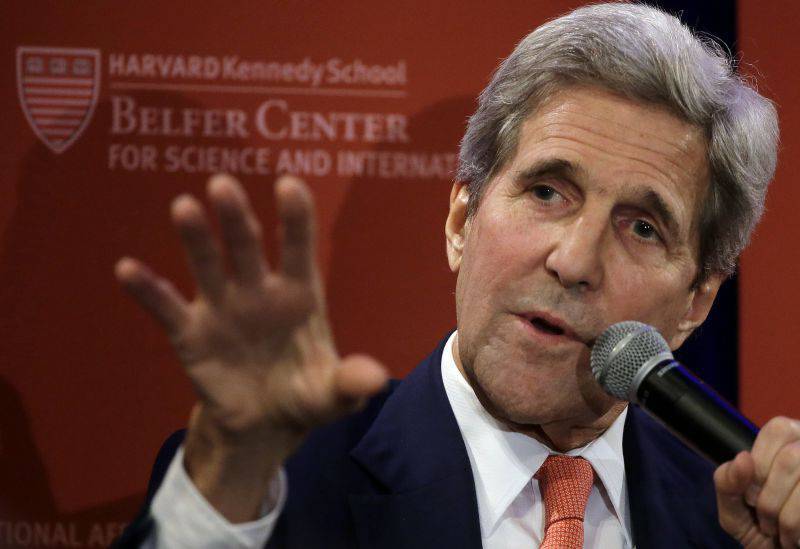 As reported from New York correspondent. TASSUS Secretary of State John Kerry, speaking at the John F. Kennedy School of Management at Harvard University, said that the decline in world oil prices is affecting the Russian economy, but the United States is "not happy."

“In Russia, the fall in oil prices combined with the sanctions imposed created difficulties in the economy,” said Kerry. - We can not rejoice at this, because we do not want the Russians to suffer. Of course, we are trying to ensure that changes are made in regard to Ukraine, and, as I see it, in the next month we will see if this has been possible. ”

“Ukrainian” replica Kerry was not accidental, we add from himself. Next, the Secretary of State hinted at a likely change in the US position on sanctions against Russia.

“I think we will be able to ascertain in the coming months whether the Minsk agreements are being implemented, as after the last meeting of the Norman group in Paris, whether the cease-fire is observed and whether heavy weapons are being withdrawn. Then, ultimately, the position regarding sanctions may be changed, ”Mr. Kerry quotes. RIA News".

In addition, the US Secretary of State said that Washington is seeking a change in Moscow’s attitude towards Kiev and will be able “to prove in the coming months whether this has been done properly”.

Apparently, there were no clarifications on the application, since the agency’s quotation ends here.

Recall that Washington, through the mouths of its high-ranking politicians, has repeatedly pointed out to the Kremlin that sanctions could be lifted if Moscow fulfills the Minsk Agreements. Washington sees this performance very peculiarly, which hardly allows all the parties involved to understand what is meant by the observance of these agreements. At least, the members of the “Norman Four” cannot at all reach a consensus, but even a compromise.

The most curious thing in the statement of John Kerry is his touching concern for "suffering Russians." At Harvard, of course, there is a suitable audience for such propaganda — not only teachers, but also students, future corporate executives, and future politicians who need to learn not to say what they think.

Even Senator McCain confessed his time to the love of the Russian people. Why shouldn't the Secretary of State feel sad about the fate of the unfortunate Russians? Especially in the USA there is a tough pre-election competition between Democrats and Republicans. There is no other explanation for the pompous speech of John Kerry. After all, that there is no particular advancement in the execution of the notorious Minsk agreements.

It is unlikely that the United States will suddenly lift sanctions against Russia in the coming months - Republicans in Congress will simply howl like wolves and arrange B. im. Obama an impeachment.

That is why the Secretary of State made his “joyless” passages about the Russian people at the John F. Kennedy School of Management at Harvard University, and did not call a colleague Lavrov or did not make a special statement to the press. Future managers should learn the basics of rhetoric and propaganda by listening to the source. Listening to someone who makes international policy every day and controls the whole State Department.

Does Washington intend to lift sanctions from Russia? Or does he even intend to admit that the Russians are fulfilling all the five agreements with a plus, and the way to the lifting of sanctions is open? Not. There are no prerequisites for this. Otherwise it would be Washington from a fantastic parallel reality.

Difficulties for the Russian economy, which have arisen because of low world oil prices, “do not please” the United States because Russia, having understood the aspirations of the West, gradually, step by step, reorients the economy towards the East. Months go by, then years will pass, and Western business will miss the huge sums that will settle in the pockets of dealers from Asia, Latin America, the Middle East, and Africa. Not everything can be replaced, but part is possible. At least, Polish apples or Greek oranges of Russia come to nothing. Yes, and products from the Baltic States - too. It is very difficult for the West, that is, the European Union, to replace Russia as a gas supplier. Yes, and Russia needs something from the EU countries, in particular, equipment from Germany.

In short, we can assume that the West is preparing to back down. But not because of the "suffering Russians" and not at all in the near future. The State Department has nowhere to hurry: the Obama administration has more than a year to rule.

What do Russian international experts think of Kerry's Harvard speech?

“Such statements have been made many times before,” said "Free Press" Researcher at the Institute of US and Canadian Studies, Russian Academy of Sciences; Candidate of Political Sciences Gevorg Mirzayan. - That is, this is the principled position of the West, which he always voices. The fact that sanctions are not an end in themselves. And that the sanctions will be lifted as soon as Moscow fulfills the Minsk agreements. Kerry didn’t say anything new. But he only repeated what he himself had said before many times. And what Obama said. That the sanctions will be lifted the field of execution of the Minsk agreements - everything. And there is no progress and there can not be. "

But how long can the notorious Minsk agreements be inclined?

According to the expert, as long as the United States wants to maintain the sanctions regime, they will reiterate that Moscow has implemented the agreements mentioned. Despite the fact that it is Russia that does much to ensure that these agreements are implemented; Ukraine impedes their implementation. But in the West, no one publicly recognizes the latter.

Head of the Department of Regional Policy at the Institute of Public Administration and Management at the Russian Presidential Academy of National Economy and Public Administration Vladimir Stol believes that even if we are talking about some kind of easing of sanctions, it is only in the areas of increased interests of the western side (for example, which is necessary for the French to continue their space program).

“It would be extremely naive to expect that some kind of easing of sanctions against our country is coming,” the expert noted. - Of course not. And in the near future, it seems to me, is not expected. ”

Experts, as we see, also do not think that the United States suddenly went back down and decided to “do much good” for Russia. There’s really no reason to think. Moscow, which had to go through the hell of shock therapy tests and subsequent capitalist crises, and now also through sanctions, knows the value of American promises and gifts.

Very, of course, touchingly sounds: "We can not rejoice at this, because we do not want the Russians to suffer." And who can say this if not John Kerry! Politics that in the United States earned reputation of "pathological liar."

We are in Yandex Zen
Situational analysis of the death of the MH17 flight (Malaysian Boeing 777), made on the basis of engineering analysis from 15.08.2014
Syria: Americans scare themselves, and Asma Asad buys chairs
58 comments
Information
Dear reader, to leave comments on the publication, you must to register.