When will the atomic grenade explode in the hands of the president of Ukraine, Petro Poroshenko? 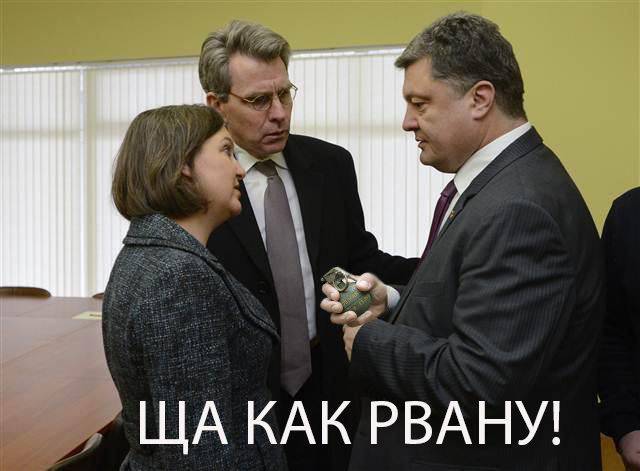 Under the cover of talking about combating “Russian aggression”, Ukrainian politicians and oligarchs under the direct leadership of the United States clashed in the desire to “saw” the nuclear industry of an “independent” power as quickly as possible, which led to another political scandal with a characteristic financial and corrupt “tinge” from of which all of Europe has become uneasy, since it is precisely her that is threatened with the fate of becoming one huge Chernobyl.

Analyzing the activities of the current Ukrainian government, the phrase that idealists are preparing a revolution is being recalled more often, fanatics are realizing, and frank scoundrels are using its results. Indeed, even making a discount on increased revolutionary nervousness and military hysteria, it is simply impossible to explain some decisions of President Petro Poroshenko and Prime Minister Arseniy Yatsenyuk from the point of view of logic.

However, everything falls into place, given that many of the actions of Ukrainian politicians are not at all explained by the revolutionary necessity and concern for the welfare of the Ukrainian people, but by the trivial intraspecific struggle and opposition of financial clans.

So, for example, the ban on passenger air transportation between Ukraine and Russia seems surprising at first glance. It would seem, what a ban on flights can annoy Putin or his entourage? That's right, nothing. On the contrary, ordinary Ukrainian and Russian citizens will suffer, and Dmitry Kiselev, Vladimir Soloviev and Alexander Gordon will receive a new reason to criticize (and this time is very fair) the Ukrainian authorities.

However, if we consider that the Ukrainian airlines belong to the famous oligarch Igor Kolomoisky (the enemy of Poroshenko and Yatsenyuk), then everything will fall into place. By blocking flights between the two countries, the Ukrainian authorities cause economic damage to their political rival, and the fight against “moskaly” is only a cover for covering the squabbling of Ukrainian bulldogs under the carpet. Something similar is happening in the field of nuclear energy.

Under the cover of talking about combating “Russian aggression”, Ukrainian politicians and oligarchs clashed in a desire to “cut” the nuclear industry of an “independent” power as quickly as possible, which led to another political scandal with a distinctive financial and corrupt “smell” that didn’t imagine all over Europe. .

It all started with the fact that journalists dragged into the light smelly historyassociated with the financing of the party Yatsenyuk "Popular Front" at the expense of funds obtained from the transactions of Ukrainian power engineers and atomic lobbyists.

How did the media manage to establish that the transactions of the companies of Energoatom GP, Atomkomplekt, and a number of NPPs (South Ukrainian, Khmelnitsky, Zaporozhskaya, Rovno) were initially laid down by a rollback of 15 − 20% of the value of contracts for maintenance, supply equipment or services.

The Chairman of the Committee on the Fuel and Economic Complex, Nuclear Policy and Nuclear Safety N. V. Martynenko was put in charge of the process of replenishing the party treasury.

Thus, the journalists turned out to be a whole company of “doylshchikov” adhering to the nipples of a large financial “udder” of the Ukrainian atomic energy industry. It is customary to laugh at such hapugas in the "Nezalezhnaya", but this time the Ukrainians are not amused ...

The opened picture of financial frauds clearly demonstrated that the citizens of the country, in the conditions of the growing budget deficit, for a long time financed from their own pocket a party that was far from being the most popular prime minister in the country. The leaders of the “Maidan” themselves were embroiled in the very same corruption schemes, in which they had only recently accused Yanukovich and his entourage.

However, the scandal involving Arseniy Yatsenyuk fades in front of the scale and scope of the actions of President Petro Poroshenko, who is not only experiencing combat fighters, but also managed to become a great expert in the field of atomic energy in his free time.

While the “Popular Frontists” pinched off some hundreds of millions of dollars from the budget, the head of state decided to act where much bigger. Under the cover of talking about the diversification of the economy and the fight against Muscovites, Poroshenko decided in one fell swoop to reorient the country's nuclear power plants to nuclear fuel of the American company Westinghouse, violating not only all the agreements signed earlier with the Russian company TVEL, but all conceivable and inconceivable standards nuclear safety.

The desire to subjugate the entire nuclear industry in one fell swoop and, accordingly, to switch all cash flows from the “Popular Front” of Arseniy Yatsenyuk to his own pocket Poroshenko’s Block and to his beloved — this is actually the explanation for this “strategic” operation of the Ukrainian president the oligarch

In addition, decisive factors are, on the one hand, the need to continue to fill their pockets in the face of a shrinking pre-default Ukrainian budget, and, on the other hand, to fulfill all the desires of the overseas Big Brother, which is seeking to get bigger and faster in the run-up to the collapse of Ukraine.

The project is so important for American businessmen that the American ambassador to Ukraine, D. Pyatt, joined the "solution of the issue". The process of coordination so fascinated to the conductor of the “revolution of hydration” with the diplomatic passport of the United States that he even began to personally indicate to Ukrainian officials the specific dates for the introduction of American fuel cassettes and to declare penalties for sluggishness.

Naturally, this situation caused an outburst of indignation among specialists in the field of nuclear energy, who rightly noted both the technological incompatibility of equipment and the incompetence of decision makers on such complex issues affecting the safety of tens of millions of people.

The answer of the authorities was extremely simple. Professionals were silenced, imposing a security stamp on all key documents of the project, and nuclear experts were simply excluded from the preparation of basic contracts.

This situation creates a new threat to European security, which is already in a critical condition due to the influx of migrants and the crisis in the Middle East. And this time this threat emanates from the administration of the Ukrainian president himself.

A monkey with a grenade is funny and scary. And when professional corrupt officials are engaged in the nuclear industry of a huge country, it is not even funny.
Moreover, there is another example of glaring outrages, negligence and irresponsibility associated with the nuclear industry. And here we will talk about Chernobyl ...

Recently, the Ukrainian president and other officials of smaller rank enthusiastically report on the Ukrainian army as the “strongest army of Europe” and report thousands of pieces of equipment entering its armament.

At the same time, some media in Ukraine began to talk about the restoration of military equipment, which was used in the aftermath of the Chernobyl disaster, and its transfer to the part of the APU, taking part in hostilities in the ATO. And not only there, but also, of course, after appropriate “pre-sale preparation” and painting, some samples are even offered for export to foreign countries.

Moreover, until recently, thousands of units of civilian equipment — trucks and cars, buses, road-building equipment, etc. — were in the exclusion territory.

With the full economic gap with the Russian Federation, supplies of spare parts and components almost completely ceased there, so fraudsters now use all this huge fleet of equipment as a donor for the supply of engines and other spare parts to Ukrainian enterprises that manufacture, repair and restore machinery.

In order to conceal these facts from the world community, Ukrainian businessmen themselves organize large-scale fires in the exclusion zone, as a result of which it is simply not possible to confirm or deny the facts of the removal of military equipment from the infected territory.

The Ukrainian authorities need Chernobyl fires in order to convince the public that, despite the casualties, the Ukrainian army is still equipped with equipment (restored and decontaminated), efficient and mobile, and, on the other hand, the media of the “Russian aggressor »Thus affecting the morale of servicemen of the Armed Forces of Ukraine who allegedly use radioactive equipment with all the ensuing consequences.

However, the main cause of fires in the exclusion zone are deliberate actions of the units involved in its protection. Alcoholism and drug addiction reign in these units, there is practically no discipline and control over the situation by the management, which avoids being in the contaminated area. From idleness, the fire brigade carrying service in the zone for the corresponding bribe from persons engaged in theft in the territory of alienation organize fires.

Moreover, they “set fire” for the whole villages, demonstrating their knowledge and skills in the field of fire spreading and extinguishing. Often, fires go out of control of the firefighters themselves and lead to burnout of large areas.

Such fires allow you to write off huge funds to extinguish them. There are cases of cancellation of illegally sold units of special and other official equipment, allegedly affected by extinguishing fires and therefore not recoverable.

Thus, it should be concluded that in the conditions of uncontrolled decay and decay of the Ukrainian state, anarchy reigning there and widespread corruption, the risk of catastrophic accidents at Ukrainian nuclear facilities, as well as the uncontrolled spread of technology from the Chernobyl exclusion territory increased many times. As always, new disasters fall upon Europe, and the United States will be left behind. Poland will be affected by such shocks first ...

We are in Yandex Zen
About Stalin and Khrushchev
What you didn't want to know about England
35 comments
Information
Dear reader, to leave comments on the publication, you must to register.