October 16 2015
13
These two nationalistic phenomena are united by the fact that these are berries from one American field, they also put their “enemies” on their knees in the same way, then some like to burn, others prefer to cut their heads, is there a big difference? 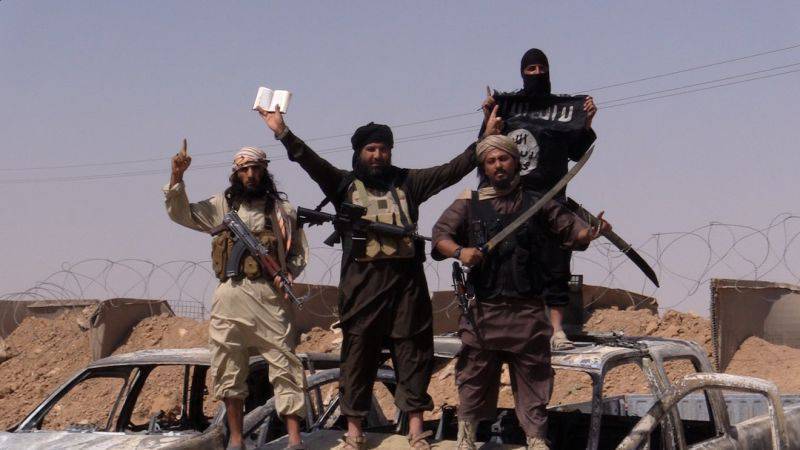 After the start of the Russian military air operation without modern air defense systems, ISIS in Syria may receive a full Maidan. Mercenaries, of which a significant number in the terrorist caliphate do not like to fight, when they are bombed from the sky, they like to kill with impunity, feel the difference. There is information that the entire mercenary divisions began to leave the caliphate, so the Igilovs went to the Maydanovites with requests to supply them with modern air defense systems.

Given the closeness of these phenomena, publicly supported by Anton Gerashchenko, adviser to the head of the Ministry of Internal Affairs of Ukraine Avakov, who called for helping igilovtsam avenge pilots of the Russian Aerospace Forces by publishing personal data on the Peacekeeper killer website, supplying modern air defense missile systems to Bandera Ukraine (Bukov?) .

But if the Nazi-Ukrainians put the air defense missile system to the LIH, the Maidan can repeat the fate of the LIH, that is, Moscow will have the right to talk with it as with the LIH, through VKS and winged Calibrov. Very point, in some places, warehouses, and military units.

There is a hope that the matter will not come to this, Berlin will give Kiev on time, as it was done on 24 of August. However, if another revolution of “Bandera dignity” occurs, then a complete Maidan will come, and then everything is possible ...

“I think everything is possible with us. It seems to me that there will not be such a big Maidan as it was before. I think the next Maidan will start early and end in the evening. Now many of our warriors are returning from the front line. They will run to the Verkhovna Rada, "break" all politicians, put them on the wall and shoot them. And this will end the third Maidan, ”said a whole people's deputy from the Nazis, Mikhail Gavrilyuk, the other day.

Today, the operation of the VKS of Russia and the Syrian army with ground support from Iran against ISIL has every chance to end successfully. Moscow is talking about terms of three to four months. This will lead to the extrusion of ISIS militants to Mosul (Iraq), from which they, in fact, came to Syria with American heavy equipment seized in warehouses in Mosul. (The Americans seem to have specially stockpiled huge stocks of weapons there.) But what will happen next?

Directions to the Caucasus, Central Asia and China, which are widely discussed with us, are not yet relevant for ISIL: there is no common border and just far away. According to Syria, they well understand how they will be met there. The operation of the Russian Aerospace Forces in Syria warns of possible ISIS aggression on Russia and its allies. "Moscow launched a complicated military campaign in the blink of an eye," said Alistair Kruk, an ex-employee of the British MI-6, "these actions of Russia may initiate a military alliance of the SCO countries to pre-empt NATO regime change projects." In the East, with the help of ISIS, we will add from ourselves what the Englishman cannot say.

Of course, the ISIS emissaries, the catchers of human souls, will go in all directions, but where will the militants from Mosul go? “They are cruel people, but not stupid,” Vladimir Putin reminded the Americans from the rostrum of the UN General Assembly.

Most likely, ISIS will go where it is easier to go. Baghdad, where the Shiite government is in power, protects Iran, Damascus protects Russia with the support of Iran. Therefore, from Mosul for ISIL are more attractive destinations in Saudi Arabia, or Turkey, and then to Europe. In fact, they have already arrived in Europe, by a Trojan migrant horse. With the threat of destabilizing Europe, if the West does not stop bombing ISIS.

By the way, the Saudi Minister of Defense recently urgently flew to Sochi to Vladimir Putin. Did he invite you to make a hajj to Mecca? Vladimir Vladimirovich himself opened the veil over this visit. According to him, the Gulf monarchies confidentially say that various Islamic extremist terrorists pose the greatest danger to them. The fact is that Saudi Arabia has a very long northern border with the igilovskoy part of Iraq, in the south of Riyadh had the folly to get involved in the conflict in Yemen, and now has every chance to get a war on two fronts.

Turkey is in a similar situation, which, according to the Prime Minister of the Euronews channel, “is fighting on two fronts at once, against ISIL and the Kurdistan Workers' Party”. Washington has always had serious disagreements with Turkey Erdogan (tried to stir up a revolution against Erdogan, and supports the “parallel government” of Turkey), and recently he has developed contradictions with the Saudis. Therefore, it is likely that after Syria, Saudi Arabia and Turkey will end up under ISIS attacks. Especially if the suspicions are true that ISIS is a tool of the United States, as previously al-Qaeda.

Then, after the Syrian campaign, terrorist attacks are possible in Saudi Arabia, Turkey and Europe. It is possible to destabilize Europe, since ideologically it is the weakest link before the onslaught of ISIS emissaries. Syria, having freed itself from ISIS, in a certain sense, will nevertheless “fall”, turning into a federation or even a confederation of three enclaves: the Alawite, the Kurdish and some Sunni.

We are in Yandex Zen
ARMY-2016. Cluster VCS. Part of 2. Space is space!
Situational analysis of the death of the MH17 flight (Malaysian Boeing 777), made on the basis of engineering analysis from 15.08.2014
13 comments
Information
Dear reader, to leave comments on the publication, you must to register.