October 17 2015
109
Experts cite the statement made by the representative of China at a meeting of the UN Security Council. Chinese Foreign Minister Wang Yi said that the world should respect the independence of Syria and its territorial integrity. These words gave some analysts a reason to talk about a “small” world war, to which China’s intervention in the Syrian conflict would lead. Other experts criticized the Russian-Chinese strategic alliance, questioning the "inviolability" of Beijing's loyalty. So what to expect from the Celestial?

According to Comrade Wang Yi, Beijing advocates respect for the basic principles of international relations and opposes constant interference in the internal affairs of other countries. The decision on the fate of Syria should be taken by the Syrian people, said the Chinese diplomat.

On the same day, October 13, the English site of the Azerbaijani agency News Trend quoted Wang Yi’s statement at the meeting of the UN Security Council concerning Syria.

According to him, the world must take control of the humanitarian crisis in Syria and "promote the peace process."

Thus, from the statements of the diplomatic circles of China it is impossible to draw any conclusions about the desire of the PRC to “get involved” in the Syrian conflict and to arrange a new “world war”.

He told Trend that China’s intervention in the Syrian conflict could lead to a small world war.

According to the analyst, the interests of many countries are intertwined in Syria. Someone supports President Bashar Assad, and someone supports terrorist organizations. Different "interests" of all the "parties involved" will completely change the regional boundaries, the expert believes. He also allows the creation of "new small states" that will gain control "over energy resources."

But, let me add, is China really going to support someone in the conflict in Syria? Assad? Not. Maybe terrorists? Or “moderate oppositionists,” as the US does? Not. Recall the words of a diplomat: "China has no personal interest in the Middle East ..."

Journalist "Independent newspaper" Vladimir Skosyrev writes: “The fiercer the war in Syria, the more China follows the parable of the monkey watching the tigers fight from the mountain. Beijing, the strategic partner of the Russian Federation, is not going to support it in this conflict. ”

The journalist also considered the speech of the Minister of Foreign Affairs of the People's Republic of China Wang Yi at a meeting of the UN Security Council. After quoting the fragment, the reporter asked himself a question: “But what exactly is the head of Chinese diplomacy thinking about the Russian military intervention in Syria, which has become almost the main topic of comments in the world media?” And he answered: “It’s not clear from a speech.” But Western leaders, beginning with Obama, blame Moscow for expanding its intervention in the Syrian conflict. And what is China? The dragon is silent.

“However, the Xinhua news agency, the official mouthpiece of Beijing, regularly sets out statements by representatives of the Russian Defense Ministry about the raids of our pilots and targets hit. Outlines, but refrains from commenting. This position recalls the famous Chinese parable about the wise monkey, which is watching the tigers fight from the mountain. ”

Meanwhile, other foreign analysts questioned the strength of the Russian-Chinese strategic partnership.

The site Eurasia Review An article was published by Ph.D. Subhash Kapila, an Indian analyst who graduated from the British Royal Military Academy in Camberley and served for a long time in the Indian army and later worked in the office of the Cabinet of Ministers and in diplomatic posts in Bhutan, Japan, South Korea and the United States.

In his opinion, Beijing’s “unpredictability” hinders the Russian-Chinese strategic alliance. The expert is convinced that the desire of the Celestial Empire is obvious: to become “the next global superpower”. Such a goal goes against Russian and American strategic interests.

Beijing is not loyal to either Moscow or the United States. Historical examples are known to everyone: even over the past few decades, the PRC has moved from a strategic proximity to the United States to an equal proximity to Russia. China "was never completely loyal" even to its former "ideological mentor and strategic patron" - the Soviet Union.

Russian-Chinese partnership - this is just so-called. a multi-year strategic agreement that emerged at the end of the 1990 era, which replaced the Cold War times.

The analyst does not consider such a partnership "strategic." This is only a reaction to the "rampant manifestations" of the strategic dominance of the United States in the past two decades.

The expert shows a lot of contradictions in the international politics of Russia and China.

Russia and China have different views on Japan. China regards Japan as an “irreconcilable enemy”: Beijing is attributed to historical experience and fears associated with a reappraisal of military priorities and defense philosophy by Japan.

Russia, despite the well-known territorial dispute with Japan over the islands, on the contrary, is seeking to establish good political and economic relations with Tokyo.

Another regional factor by which China and Russia differ is Vietnam. Russia has long been a strategic partner of Vietnam and had an ideological connection with it. Today, Russia has received a contract for the supply of six submarines to Vietnam, as well as missiles, combat aircraft and anti-ship missiles (anti-ship missiles). Russia is interested in seeing Vietnam “drop out” of the partnership with the United States.

China, which “aggressively balances on the brink of war and military aggression against Vietnam because of disputes in the South China Sea,” marks Vietnam as an “enemy”, despite its ideological proximity. China continues to escalate the conflict and ignores international norms and conventions, the expert said. Such unfriendly actions against China have aroused in the Vietnamese "strong anti-Chinese sentiment."

According to Subhash Kapila, Russia perceives China as a “long-term strategic threat,” especially in relation to the security and integrity of its Far Eastern regions, which “China licks” (there are already thousands of illegal Chinese immigrants, ”the author writes).

As for the Middle East, this region is the "decisive basis of Russian national security interests." And here, China, in addition to "rhetorical support of Russia in Syria," did not do anything substantial. The only thing is joint Russian-Chinese naval exercises in the Eastern Mediterranean this year.

In his previous articles, the Indian raised the topic of a possible reaction of Russia and China to engaging a bear or a dragon with the United States “in direct confrontation”. What will happen in this case? How will Moscow or Beijing behave if one of them turns out to be an opponent of Washington? The expert’s answer was this (and it has not changed now): neither Russia nor China will go “beyond rhetorical support”.

Finally, in Russia itself, according to analysts, there is a “strong opposition” opposing a strategic alliance with China. The argument of opponents of rapprochement with the Middle Kingdom is clear: the delivery of a colossal amount of energy resources to China and the sale of arms to it will strengthen its military potential. The latter, in turn, will greatly complicate Russia's relations with its friends (for example, Vietnam). Moreover, “one day” China can include Russia itself in the list of military enemies. Finally, doing business with a partner like China, Russia will weaken its strategic position and spoil its image. 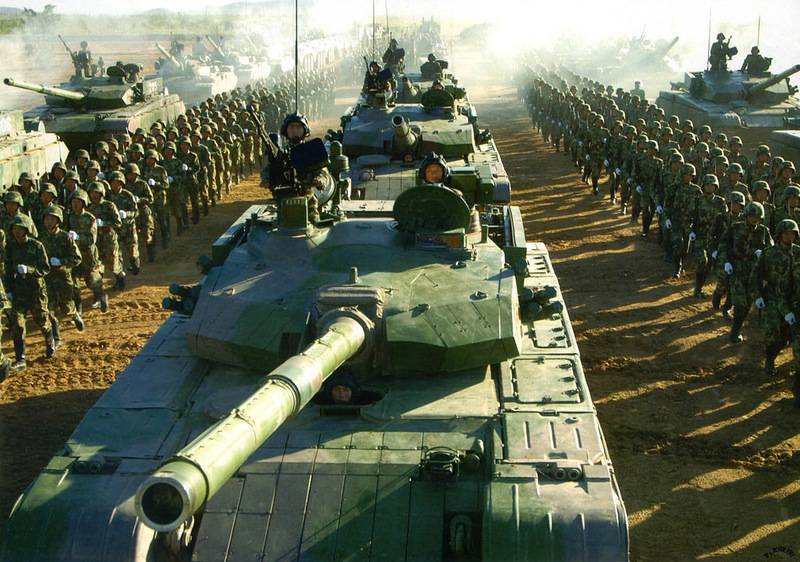 Thus, we will add in conclusion that foreign experts believe that Russia and China cannot have a strategic partnership, and even a limited alliance with the “dragon” can damage Moscow in strategic terms.

In addition, experts believe that in the event of a conflict between the US and Russia, the Chinese “dragon” will simply watch the dispute, confining itself to the same rhetoric. In turn, the Russians will not go to war for the Chinese brothers.

Also, experts doubt that the PRC will take any part in the campaign in the Middle East, except for the "rhetorical". The PRC has no “personal” interest in this region, official representatives of the Middle Kingdom say.

Bottom line: alarmists, leading the talk about the coming "small" world war, which will begin with the actions of China in Syria, in vain shake the air.

Observed and commented on Oleg Chuvakin
- especially for topwar.ru
Ctrl Enter
Noticed oshЫbku Highlight text and press. Ctrl + Enter
We are
Geopolitical mosaic: Syrian rebels criticized Washington for measuring the length of their beards, while Lithuanians were outraged by the British contest "Miss USSR"Syria: democracy or peace?
109 comments
Information
Dear reader, to leave comments on the publication, you must to register.