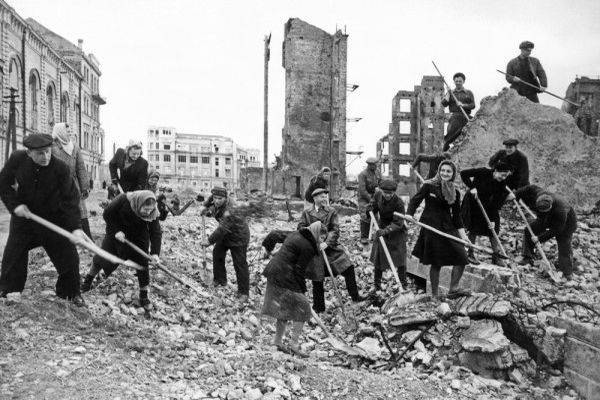 During the Great Patriotic War and in the post-war years, the work of ex-prisoners of war and prisoners who were tested in special camps established in the structure of the Directorate of Prisoners of War and internees (UPVI) of the NKVD of the USSR was widely used at the restoration work. Since February, 1945-th such camps were called test-filtration. Repatriated civilians were also sent here. Despite the fact that the former prisoners of war were not convicted, they had a limited degree of freedom and worked forcibly1. How was the restoration of the destroyed city on the Volga organized by the special contingent?

In the spring of 1943, at the end of the Battle of Stalingrad, a special camp N 0108 appeared on the territory of Stalingrad. The contingent of the camp was actively involved in the restoration of industrial enterprises of the city, the products of which the front needed. The main area of ​​the camp in which the 3000 people were located was located in the workers' village of the Stalingrad Tractor Plant (STZ), and the 1943 branch of the camp for 1500 people created in July was attached to the machine-building plant N 221 Barricades. The special contingent was used by the NKVD (NKVD) office in the Stalingrad region, at the Red October metallurgical plant, at the Stalingrad district power station 2. His work was led by special construction organizations. At the FCZ, such an organization was called a special construction and assembly part (OSMCH) N 14 ("Traktorostroy"), at the N 221 plant - AOMC N N 25, at the Red October plant - a specialized trust (special trust) N 1. In June, 1944, 600, special contingent personnel were transferred to housing3.

The labor of former prisoners of war was regulated by the order of the NKVD of the USSR of 6 on April 1943. Workers were to be used in accordance with their specialty, qualifications and physical condition, to work only as part of teams under the control of technical personnel. Frequent redistribution between sites was prohibited. Even the passage to the enterprise had to be made through separate gates - in order to exclude the possibility of communication with civilian 4.

However, the reality of 1943, did not allow to fulfill all the requirements. So, in the report of the chief of the special camp N 0108 engineer lieutenant colonel F.S. Yemelyanov for 2 of 1943 was indicated that the convoy provided only 500-600 people at the FCZ, and the rest, due to the lack of escorts, were taken to work only "under the supervision of company and platoon commanders". "The work is done on the 24 sites together with the workers of the tractor plant, which makes it extremely difficult to protect the special contingent" 5. The report for 1 quarter of 1944 noted: "The difficulty of protecting the special contingent lies in the fact that many workshops of the plant are simultaneously being restored and in operation. In many workshops, civilian workers work and live, therefore isolating the special contingent from the workers of the plant and OSMC workers N 14 is not possible "6.

A significant part of the special contingent did not own construction specialties and had no experience in the factories. Poor work organization, difficult living conditions, the suppressed psychological state of people whose freedom was limited, and correspondence was forbidden - all this affected productivity. Products were sometimes given less; there was a lack of clothes, the living quarters were not cleaned, there was no glazing in them. The dining room and the medical part of the 7 were in unsatisfactory condition. The report for 2 quarter of 1944 noted that “since the organization of the camp, the special contingent has been sleeping on bare plank beds, which leads to a deterioration in the physical condition of people and an increase in the incidence. The special contingent has not been provided with bedding, it is unsatisfactory, the outfit is shabby which has been subjected to repeated repairs and has come almost completely unsuitable for wearing "8. The high incidence in the camp, especially gastrointestinal diseases, was caused precisely by the poor conditions of 9.

In July, 1943 was taken from construction sites by 7, and in August, 8 shoots, 10. In order to prevent them and to increase labor productivity, political work was carried out in a special camp: conversations on various topics, a combat leaflet was issued, reading fiction, watching movies. In 1, 1944 was shown 24 motion pictures (“It protects the Motherland”, “Pig and the shepherd”, “Member of the government”, “Battle for Soviet Ukraine”, “Leningrad in the fight”, “Death of the Eagle”, “Suvorov "," Daughter of the Motherland "," Victory in the desert ") 11. Tried to hold socialist competition. Only in July 1943, "special contingents were declared 62 thanks, most of them for their conscientious attitude to work and exemplary military discipline in the camp" 12. 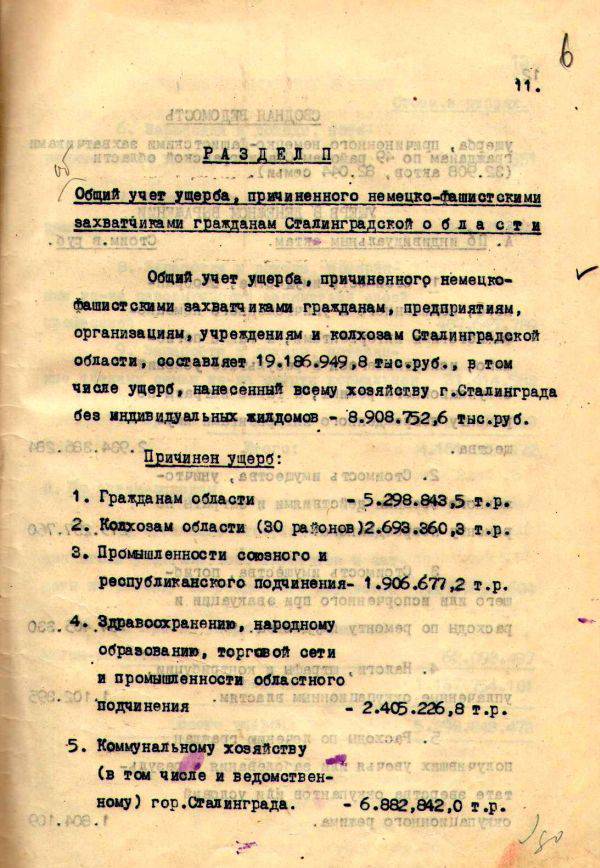 Fragment of the document, which indicates the extent of damage caused to the city and region by the German invaders. A photo:

"From now on, we must consider ourselves Stalingrad"

In 1944, tested prisoners of war were transferred to the states of Stalingrad enterprises. However, UNKVD was in no hurry to part with them. In February 1945, the special camp N 0108 was disbanded, the remaining untested were concentrated in the camp department at the construction department of the economic department of the NKVD. The number of special contingents did not exceed 1200 people, and by the end of the year it was only 345 people 15. They worked as carpenters, porters, laborers at the Stalingrad Power Plant, a prosthetic plant, a FCZ, a confectionery factory N 4, in urban schools, at the Dynamo Stadium.

In 1944, the repatriation of Soviet citizens from abroad began. Formally, they were guaranteed the preservation of all the rights provided for by the USSR Constitution, they could independently choose their place of residence and work. However, in practice such persons were sent to the NKVD check-filtration points for inspection; officers who were in captivity and were suspicious - in the special camp of the NKVD; former prisoners of war of ordinary and non-commissioned officers of the ages to be demobilized were released to their homes, and former prisoners of war and civilians of the ages who should have served in the army were enlisted in the workers ’battalions of NKO 16. By a decree of the State Defense Committee on 18 in August 1945, the use of labor of Soviet citizens released from captivity at the enterprises of the coal and timber industry and ferrous metallurgy was legalized. Those who passed the state inspection were to be transferred to the states of the enterprises where they worked. They did not receive the right to choose places of residence and work.

By August, 1945 in the Stalingrad region turned out to be about 7000 repatriated. By order of the Stalingrad regional party committee of 29 in May 1945, all of them should be “sent to agricultural areas, explaining that this measure is due to economic expediency, as well as the lack of housing stock in the city” 17. Thus, "a large group of citizens who lived before the war in Stalingrad, after their liberation, was sent to Rudnyansky, Solodchensky, Gmelyinsky, Staropoltavsky and a number of other districts" of the Stalingrad region18.

The consent of the repatriates to the resettlement was not required. It was not required for sending it to the enterprises. The worker 85 of a separate working battalion complained to the Chairman of the USSR Supreme Council 28 on April 1946: "I lived in the Stavropol Territory ... In 1941, I was drafted into the army, where I was captured at the front. After being liberated ... we were called upon to After working there for 3 of the month, we received documents from the filtration department and sent them to the place of residence. Then we took the documents, transferred them to 85 ORB19 and sent us to work in the Stalingrad Residential Trust ... After the ORB was disbanded, the trust administration stated us that from now on we we must consider ourselves Stalingrad. We were given passports assigned to the trust by an early number ... I ask you to clarify whether we will be released at home in at least 1946 or should we work in Stalingrad? "20 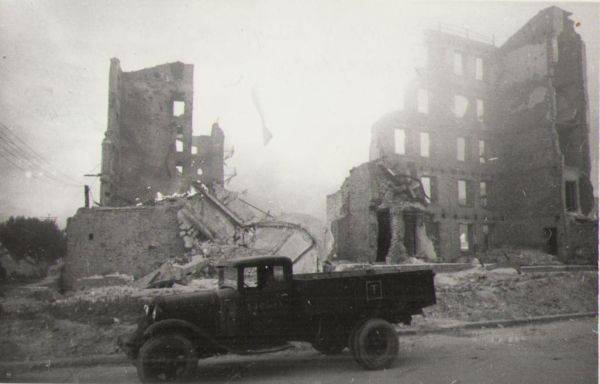 Restoration work in Stalingrad began in February 1943 of the year - immediately after the end of the fighting, and lasted almost 10 years. A photo:
"For us, there was only dirty work"

By order of the Council of People's Commissars of the USSR 22 on August 1945, repatriates were used to restore Stalingrad, by the end of the year there were about 25 000 people. These people were divided between building trust N 4 factory "Red October" (860 people), trusts General Directorate for the restoration of Stalingrad (Glavstalingradstroya) (12 000), OSMCH N 25 (2000), Building Trust N 4 (700), Traktorostroem (2000) , Spetsstroytrest N 1 (1000), Spetsstroyuvravleniyu N 1 (2100), STZ (2600), Red October Plant (800) and OSMCH N 3 (500) 21. They restored houses, central water supply, garages, schools, kindergartens, institutes, cinemas, a children's tuberculosis sanatorium and other objects of the 22. Worked as carpenters, bricklayers, carpenters, plasterers, laborers, tailors, and more often than not in the specialty23.

In post-war Stalingrad and the region, acceptable living conditions could not be ensured even with civilian 24, what can be said about repatriates. Only in 1946 the life of the workers began to improve, people gradually moved from the basements to the Finnish houses of 25. The repatriates were initially placed in unsuitable for winter premises, where there was not even minimal living conditions. Head of the construction department of the Stalingrad Regional Committee of the CPSU (b) K.A. Ukhanov stated: “Dormitories, dirt, cold, stale air were installed in hostels, 2 and 3 tiers of raw wood were installed, boards weren’t cleaned, no dormitories had bedding, among workers there was a lumpiness, no drinking water, barrels, buckets, basins, circles and washbasin hostel is not provided "xnumx. There was a shortage of food, there were no 26 medicines.

The difficult situation was aggravated by the forced isolation from families, by the cautious attitude of the population and the authorities. One of the former prisoners of the concentration camp wrote: “After what we had experienced, it seemed that our torment was over. It turns out — no. Our motherland accepted us as an evil stepmother. The NKVD officers determined our destinies, called us in for several interrogations, some people could not stand it and fainted. For us there was only dirty work "28. According to the memoirs of another repatriate, "the test passed with passion ... Our answers were accompanied by very offensive comments, there was a great distrust, and sometimes a direct accusation of treason of the Motherland. It was a terrible time. After such conversations, we didn’t want to live. We couldn’t protect anything yourself from such charges "xnumx. All this contributed to the growth of desertion from the 29 construction sites.

The authorities carried out ideological work among the repatriates. The local press published articles about the horrors of captivity; regional publishing houses published brochures on the exploits of Soviet citizens; group and individual conversations with repatriates were held; wall newspapers were produced. In 1947-1950 repatriates in Stalingrad and the region has become much smaller; they no longer constituted the bulk of the labor force. There have been changes in their status. Repatriated were transferred to the staffs of enterprises, received new professions, occupied more prestigious positions.

The maintenance of former prisoners of war and repatriated under regime conditions helped to ensure the national economy of the USSR with human resources. The authorities also subordinated their stay in Stalingrad and the Stalingrad Region to the main task of ensuring the earliest possible restoration of the region destroyed by the hardest war.

We are in Yandex Zen
Prisoners of war as losses and trophies on the Russian front of the First World War.
Special contingent. Part of 3
39 comments
Information
Dear reader, to leave comments on the publication, you must to register.