Tricky comments. How the Cossacks taught the world to live

October 15 2015
69
It is boring to live without our merry and headless little brothers. Not in the sense, of course, pets. And globally. Without the "brotherly people" from the southern outskirts of the Russian Empire. Of particular interest are discoveries in the field of stories. 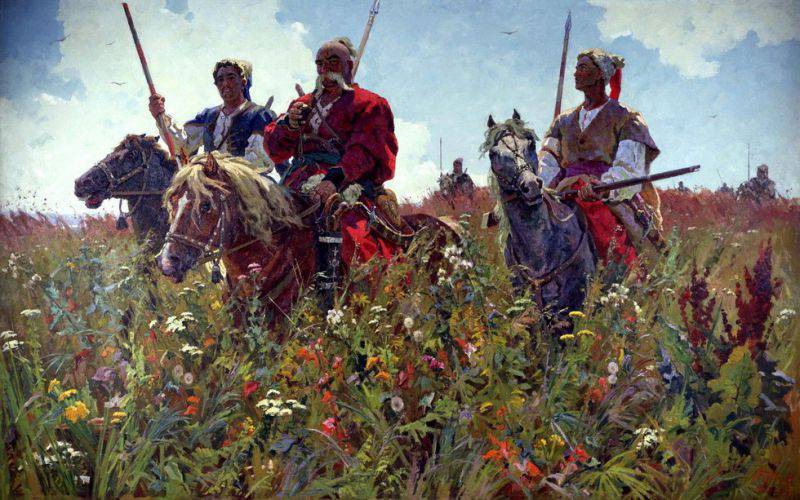 So on the eve of the new holiday, the Day of Defender of Ukraine (only it is not clear from whom the defender), the historians of the Square once again raised the self-esteem of the Ukrainian people to an unprecedented height. Where are there spaceships or Olympic gods! Landed them in full. Like bumblebees. They fly like, but somehow it is very low. More buzzing.

October 14 in Ukraine celebrates several holidays at once. First of all, this is the Day of the Ukrainian Cossacks, timed to the Day of the Protection of the Most Holy Theotokos, for it is the Mother of God who is considered to be the protector and patroness of the Cossacks. Secondly, October 14 is celebrated with UPA Day, since it is believed that the Ukrainian Insurgent Army was created on Pokrov in 1942 year.

In 2014, by decree number 806 / 2014, President of Ukraine Petro Poroshenko defined October 14 as Defender of Ukraine Day, making it a weekend.

The study is intended to show people that for Ukrainians building a state of their own and war is common. Ukrainian men seem to be genetically sharpened on this state-building. That's the way from birth. Only his eyes opened, right behind the Sabers and - to build their own state! The only thing that somehow spoils the picture of the all-Ukrainian construction and, moreover, the all-Ukrainian Cossacks, is the absence of Cossack blood in the absolute majority of Ukrainians. Well, the snout did not come out, you know. All sorts of peasants, workers, and even Muscovites generally, sent by the Russian tsars or the Communists there. To undermine and spread rot.

So, dear readers, now I will enlighten you on the "Cossack" topic. And after all, so and live the life of illiterate. With the wrong understanding of history. Especially Ukrainian. Just the facts! And only from Ukrainian sources.

1. Zaporizhian Sich is rightfully called the world's first democratic union. If we take into account that many came here because of social injustice, then this is not surprising. All questions relating to the life and work of the Cossacks were decided by a vote on the councils. Decisions of the Rada were binding for each Zaporozhets.

And you remember some kind of Greece there ... Here is the cradle of democracy - Zaporizhian Sich! Eh, and all kinds of anti-Ukrainian historians have powdered the world. And, characteristically, they started puffing even before the word "Ukraine" appeared. And before the word "Cossacks" (along with the "Cossacks"). Well, how was it necessary not to love Ukraine already at that time, so that even before the appearance of it, it was already spoiling her in all sources?

Yes, and the chiefs, there was a Gulkin nose. In the sense of little at all. From 49 to 149 people. The rest are democrats. What we want is democracy. Freemen, in one word. True, the chieftain could live and bury, if that. But to bury a free man. Here!

2. The Cossacks used not only their own knowledge, but also borrowed fighting techniques from other nations. They say that not only Ukrainians, but also representatives of 20 of various nationalities lived on the Sich: Russians, Poles, Moldovans, Belarusians ... In addition, the Cossacks and hetmans themselves often traveled the world, familiarized themselves with the cultures and customs of other countries.

Especially touches the word "say." And why do we need all these foreign notes and other documents? In Ukraine, everyone knows everything. They say ... And the composition of the Cossacks. That's because, and here Muscovites. Although, on the other hand, besides the Russians and the Poles, at that time, the other listed peoples were not born somehow either. No, their ancestors had already been born, but they were called differently. Probably in order to save this incognita.

And whose methods would the Cossacks use if they don’t have their own? Of course those who "ran" to the camp. And they resorted, of course, to confess, most often, those who had done their homework in such a way that the local men could break off on the birch for parts. Bandits, in a word. Rogues, tati. And their gangster practices included Cossack freemen in the arsenal.

3. The original ship, which the Cossacks used for military campaigns, can even be called the "progenitor" of modern submarines. It consisted of two bottoms, between which they placed the cargo in order to immerse the vessel in water. So the Cossacks imperceptibly swam to the enemies. Before the onset of the offensive, the cargo was thrown away, and the vessel suddenly rose to the surface. Of course, this was a surprise to the enemy, because no one expected that the Zaporozhye army could appear from the depths of the sea. For the same purpose, inverted gulls were used - the famous Cossack boats, who were not afraid of storms or enemy warships. They were often turned upside down to sneak up on the enemy unnoticed.

Divers, are you alive? Drink urgent water, and then, they say, you can also die of laughter. I just do not understand one thing, but the Cossacks didn’t think of sticking a straw somewhere to breathe? Why? Aah, they are afraid to butt with the Chinese for priority. It is right. Although the powder seems to be already butting ... Well, it doesn't matter. Go ahead.

4. Cossacks were respected even by knights. It is known that in the main temple of the Hospitallers in Malta there is a sculpture of the Zaporozhye Cossack, which is located on the tombstone of the Grand Master of the Maltese Knights. It symbolizes the brotherhood of arms and the friendly relations of the Order of Malta with the Orthodox spiritual and knightly brotherhood of the Cossacks.

And nothing to curse. Have you been to the grave of this master himself? Were not. So, they have not seen. And if they were not seen, then ... you are not specifically shown. Because you moskalsky agent. This is the great secret of the knightly order. Well, the knights alone could not cope with enemies! And here time - Cossacks. And that's it! Enemies are defeated, and a figure is attached to the grave.

5. There was a special category among the Cossacks - they were called the character. It was believed that they originate from the ancient Pagan Magi, who possessed secret knowledge, were able to predict the future. They said that "neither fire, nor water, nor saber, nor the usual bullet, except for silver, took" and that they "could open locks without keys, float boats on the floor, like on sea waves, cross the river on mats from the vine, take the heated kernels with bare hands, see for several miles around you, be at the bottom of the river, climb and crawl out of tightly tied and even wired bags, turn into cats, turn people into bushes, horsemen - into birds, climb into the usual bucket and swim hundreds of thousands of miles underwater in it ... "

Here are some people! And you think that someone could defeat these monsters? Dudka. No one. Well, not people, cyborg! Who is very clever - march into the bath. Bucket on the head, and sit under it for at least five minutes. Look at your attempts.

By the way, this story from the category of "say" is confirmed by official sources. Even in the Bible. Remember: "all power is from God"? Vooot. Only, given the antiquity of the great ukrov and great kozak, had to reveal a secret. All power from the ancient pagan gods. Cossack Colonel is much more worthy of power than any hereditary monarch in some kind of tribe. It is from God or Allah. And they will be younger than the Ukrainian Magi ... Hmmm.

6. For the murder of one Cossack, another brutal execution awaited the criminal - he was buried alive along with the dead. Nevertheless, theft within the Sich was considered the worst crime. Even the smallest theft was punishable by execution.

This point I have cited specifically for all the nonsense there. Well, those who believe that when the crest was born, the Jew wept. Bullshit! He did not cry. Because there was no more honest people than the Cossacks. They only stole from others. Ours have no horseshoes. True, the Jews seem to be different too? But still, they did not steal from the Jews. Because the Cossacks.

7. The famous letter written by the Cossacks to the Turkish Sultan Mehmed IV contained about two and a half dozen gross insults. Refusing to demand the Sultan to stop the attacks, the Cossacks altered all his numerous titles, turning them into mocking insults, accompanied by abstract obscene statements.

And this is for hacks like me. To know that the Cossack will always find, than to answer. And most importantly, how! As two or three dozens of insults will be issued at once, we will shut up from ... I do not even know what it is from. But the main thing - we will be silent in a rag. God forbid such to hear or read.

8. As for the characteristic hairstyle and mustache of the Ukrainian knights, it is said that the Cossacks inherited them from pagan ancestors. The tradition of shaving the head and face was transferred from the local tribes of Kievan Rus and eventually came to the Cossacks. Historians say that the ancient Slavs have no god with a beard or long hair, therefore, this image was considered divine for a long time. Although there is another legend that the Cossacks considered themselves too sinful for paradise. Therefore, when they go to hell, God can have mercy on them and pull them by the hair.

There is nothing to even comment on. If you are a Cossack, then there will be no hell for you. God only deals with those that pull stupid Cossacks for the hair in paradise. And how do you want? If a Cossack is sinless, then he must live, in the sense of death, for paradise. Only here in the heavenly office, too, as I understand it, there are failures. Some stupid young angel will not go there. All Cossacks have provided. Therefore, they became the ancestors of the great ukrov. Well, not all, but some have become the same.

This is the history of Ukraine, on the day of the celebration of the above dates, issued by the Ukrainian media at the suggestion of Ukrainian historians. You read such nonsense and you understand that the roof of the Ukrainian statehood has already left. And so far that it is not possible to find it. But Ukrainians can still amuse. And it's great fun.

Ctrl Enter
Noticed oshЫbku Highlight text and press. Ctrl + Enter
We are
Tricky comments. Again the old American record!Results of the week. “A terrible holiday spirit was hovering in the air.”
Military Reviewin Yandex News
Military Reviewin Google News
69 comments
Information
Dear reader, to leave comments on the publication, you must sign in.