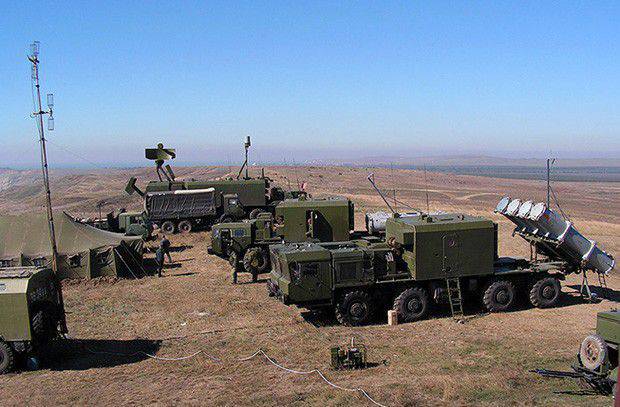 Anti-ship complex provides control of territorial waters and protection of coastal areas at long range
Primorsky areas - one of the most important trump cards in the formation and political and economic development of any state. So, to turn Russia into an economically developed and influential European power from 36 years of the reign of Peter I, the country of 26 years fought for access to the Baltic, Black and Azov Seas. But along with this, an equally important task for any state is the protection of outlets to the seas, which was confirmed by the subsequent stages of the historical development of Russia, which has not lost its achievements and the title of a great maritime power.

Nowadays, the protection of the sea coast in the Russian Federation and abroad is “entrusted” to coastal missile and artillery complexes of various ranges. One of them is the domestic coastal missile system (DBK) "Ball" (export version of "Bal-E"). As an old Russian shield, this modern powerful and effective tool is able to protect naval bases and other coastal infrastructure, cover the sea coast in areas of dangerous areas, as well as control territorial waters and torrential zones.

Nevertheless, despite the already proven high combat capabilities, from time to time BRK is criticized, especially for the insufficient firing range and flight speed of its small-sized transonic cruise missile (CR) X-35E. Abroad, this is due to unfair competition from Western manufacturers, and in Russia - an obsequious confidence in the superiority of everything “western”, a lack of specialized knowledge, and sometimes even the simple mischief of some domestic “specialists”.

However, upon closer examination, the mentioned disadvantages, in combination with other characteristics, turn out to be significant advantages of DB Ball. Thus, according to critics, the “insufficient” range is quite enough for a tactical complex. And hitting the enemy at long ranges is already the task of the means of armed struggle for operational and tactical purposes. It is easy to "justify" and the subsonic speed of the rocket. It is this “flaw” that ensures high controllability of the rocket in flight. It, in contrast to heavy supersonic missiles, allows the X-35-type CD to more effectively “work” on small-sized, high-speed and highly maneuverable targets.

Among the other characteristics of the rocket, the small geometrical dimensions, the flight and attack of the target using extremely low altitudes - 10 – 15 and 3 – 5 and, respectively, as well as its high noise immunity deserve “respect”. All these indicators meet the objectives of reducing the likelihood of the timely detection and destruction of a cruise missile by the antimissile defense forces of enemy ships.

According to media reports, the advanced version of the X-35UE rocket will have even higher characteristics, especially in the conditions of active electronic and fire resistance of the enemy. According to the “cost-effectiveness” criterion, the basic version of an anti-ship missile has no equal in the world: the high profitability of its mass production is a big plus. This is due to a significant degree of unification and the possibility of using X-35 in the ship (complex "Uran-E") and aircraft-based versions, as well as the use of this missile in the armies of the Russian Federation and other countries.

As for the BRK as a whole, the anti-ship complex “Bal-E” has no equal in its class in terms of the combat performance and effectiveness of firing at a distance of up to 120 km. First of all, it is a high probability of hitting the assigned target. Thus, on testing, each launch was successful, and instead of a few days allotted, it took only a few hours, which significantly saved the funds allocated for these purposes. According to the results of live firing, it was found that at least three enemy frigate-type ships could be destroyed with a single salvo from 32 missiles, the total cost of which far exceeds that of the Ball and missiles used. 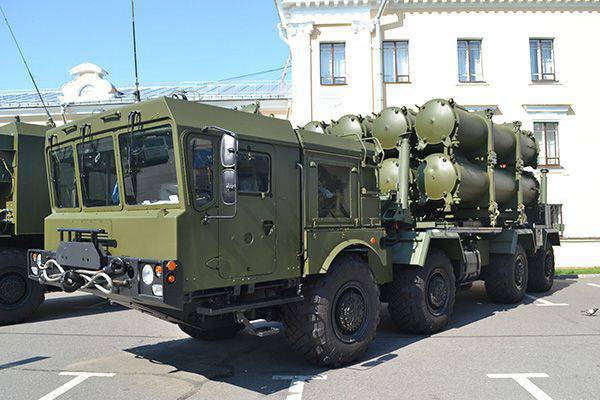 Anti-ship coastal missile system "Bal-E". Photo: topwar.ru
The effectiveness of the complex and contribute to its other distinctive features. Thus, the small interval between missile launches gives their high density in the salvo and the likelihood of overcoming the collective defense of the enemy’s naval grouping, and a significant mobile ammunition and a high degree of automation of the complex ensure the production of a second salvo after 30 – 40 minutes after the first.

Highly mobile self-propelled complex in a short time can be transferred by rail, water and aviation transport to any theater of operations. In combination with a short deployment time in a new, including unprepared position, the suddenness of the use of the complex is ensured. This, as well as high survivability due to the small “working time” and timely exit from the enemy’s retaliatory strike, is facilitated by its own fast-acting active and passive means of detecting surface targets. Highly effective communication facilities provide the DBK “Bal” in virtually radio silence mode by transmitting the necessary information with messages lasting from milliseconds to tenths of a second. Of no small importance is the ability of the all-weather Ball to carry out combat missions both when using conventional weapons and in conditions of chemical and radioactive contamination of the terrain in any weather conditions.

In general, according to the “cost-effectiveness” criterion, the Ball complex is not inferior, and surpasses foreign analogues of Harpoon Block 2 (USA), Exocet MM 40 Block 3 (France), RBS 15 Mk3 (Sweden) and Penguin NSM in a number of indicators (Norway). Prolonged use of the latter by foreign armies clearly demonstrates the expediency of using the tactical BRK Ball. At the same time, this is a very eloquent proof of its advantages to opponents who like to refer to foreign experience.

The Ministry of Defense is also talking about the need to increase the number of anti-ship missile systems. According to Admiral Viktor Chirkov, by 2020, the Russian Navy should receive about 20 new coastal missile systems of the Bastion and Ball type. Today, the Navy already has four divisions with DBK Bal: two and one in the Black Sea and Pacific fleets, respectively, and one in the Caspian flotilla.

Purpose and main characteristics of the Ball BRK

Bal Ball (3K60, SSC-6, Sennight - “week” in the Western classification) is an all-weather coastal missile system with anti-ship missiles X-35 (3М-24). Created by order of the USSR Council of Ministers and the Central Committee of the CPSU (from 16.04.1984) in the Zvezda Design Bureau (chief designer GI Khokhlov) and adopted by the Russian Armed Forces in 2008.

The complex is designed to control the territorial waters and pouring zones, protect the naval bases, other coastal facilities and infrastructure of the country, as well as the coast in areas of dangerous areas. Able to solve these tasks autonomously and as part of other defensive systems in the conditions of active electronic and fire counteraction of the enemy day and night in any weather conditions.

The main elements of the complex are: self-propelled command and control command posts (up to 2), launchers (up to 4) on the 8 RCC in sealed transport and launch containers, and transport-handling machines (up to 4). These tools provide for the detection of single and group targets, their shelling and defeat with high probability by individual missiles or a volley (up to 32) with a launch interval between RCCs to 3 s.

The X-35 type rocket (similar to the American AGM-84 Harpoon RCC) with a combined guidance system and a launch weight of about 620 kg (145 kg of warhead) can hit combat surface ships with a displacement of up to 5000 t and sea transports. The combined guidance system provides a rocket to fly at a speed of 270 – 280 m / s at altitudes 4 – 15 m above water at sea state of up to 6 points and aiming at the target with an accuracy of 4 – 6 m.

The Ball ballistic missile assures the defeat of X-35 (X-35) type anti-ship missiles in the 7 – 120 (7 – 260) km range when the launch position is removed from the coast to 10 km. The deployment time and the readiness of the complex at the new position does not exceed 10 minutes. With a full ammunition (64 rocket), the complex can move on the highway (off-road) at speeds up to 60 (20) km / h with a power reserve of at least 850 km without refueling.

The composition and configuration of the BRK Ball, which has a large modernization potential, is determined by the customer. The use of additional means of target designation (helicopters, drones, etc.) can increase the range and accuracy of target detection, and the means of setting passive interference can increase the survivability of the complex when the enemy uses highly accurate, weapons.

Ctrl Enter
Noticed a mistake Highlight text and press. Ctrl + Enter
We are
"Ball": coastal missile systemAnti-ship missile systems. Part one. On the ground
21 comment
Information
Dear reader, to leave comments on the publication, you must to register.