Country 404. Who has not investigated the Boeing disaster? Plan in the third room!

October 15 2015
32
Not always the one who speaks the first is close to the truth or the high art of understanding. And in the last rows too uncomfortable. And yet, I also really want to say a few words about the epic farce, called the "investigation." The investigation led all and sundry. And they led him in their own, completely incomprehensible to specialists, laws. In violation of all the norms and common truths. In simple terms, they were led the way the “left foot” wanted. Just because the head in this process hardly participated. 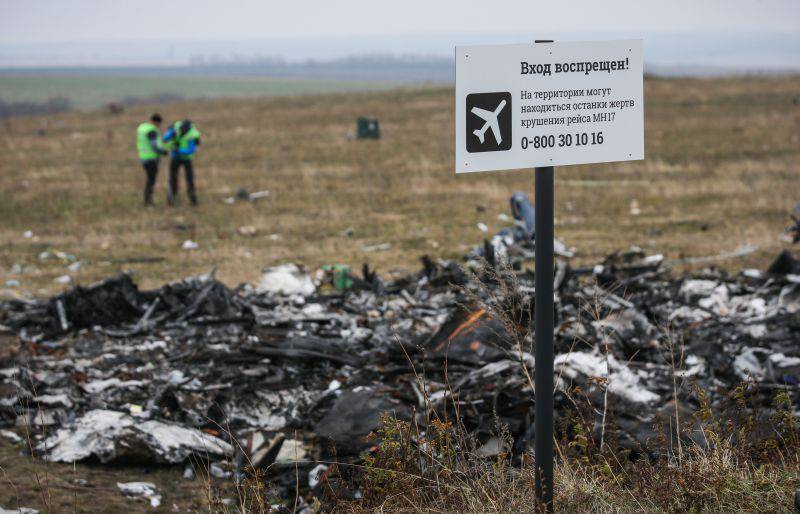 However, how much string does not curl, the end always "flies" on the sly ... where it falls. And to the international community (who I am, to be honest, I don’t really imagine), I had to provide at least something that had been worked out for as many 15 months.

I will not bore my readers by enumerating the conclusions for this very international community. I am sure that only the deaf and dumb did not hear and did not see these materials. And from people who really know and understand the essence of the matter. I am more interested in the conclusions that were made personally for Ukraine.

It does not sound funny, but this is the case. Adult readers, those who remember the Olympics in Moscow, have not forgotten a series of cartoons about Baba Yaga. Short such cartoons, in which the ending was always the same. The whole world is for, but Baba Yaga is against. Here Baba Yaga is Square. Against and all!

So, let's take a look at the Ukrainian version of the disaster report from the Netherlands Security Council and the International Group of Experts. Immediately I apologize to the readers for some nonsense and inconsistencies, but this is not my point of view. These are conclusions, I repeat, for Ukraine and Ukrainians. So send claims exactly there.

What do Ukrainians agree with? Well, first of all with the fact that the plane was shot down by a rocket from the ground. That same rocket that launched the Beech. Why so quickly and without a rant about the Russian trail? Yes, just did not occur to anyone the version that the plane was Russian. The only version is the Ukrainian aircraft. Even the name of the pilot is known.

Why we do not dispute this version? Also clear. There are no stop facts, and conjectures are now more terrible than the most stupid inventions. Just the facts. And the experiment of the Russian company has shown that this is the most likely scenario.

Further, however, a somewhat controversial conclusion, but not particularly important for investigation.

"At the same time, the investigation categorically rejected all other versions: neither the meteor, nor the fighter, no other weapon could not cause the crash of the flight MH17.

Immediately after the rocket hit the nose of the aircraft, many metal fragments separated from it, this led to the death of three crew members, and the passengers died instantly.

Although the exact launch site in the report was not named, the experts clarify that, most likely, the rocket was fired from the territory already occupied by the so-called Donetsk People's Republic. "

I hope the readers noticed the first, but a significant difference between the Ukrainian version and the Dutch one. And all the more from the conclusions of the Russian company. The rocket, it turns out, was definitely released from the territory of the DPR. Here, though not in the subject, but I will pay attention-the DNI!

Well, then it will be even more fun.

“On the day of the tragedy, July 17, 2014, over the territory where the military conflict unfolded in the Donbass, 160 more flights took place, besides MH17. According to the commission, Ukraine did not assume that for civil aviation there is a threat.

"No one even thought about the threat to civilian aircraft. Neither the state of Ukraine nor the air carriers. Moreover, three more flights were flying alongside this aircraft," said the head of the Netherlands Security Council, Chibbe Jaustra.

"At the same time, Ukraine constantly increased the level of security, prohibiting flying at certain altitudes, because a few weeks before this, military aircraft and helicopters of the Ukrainian army were shot down there."

"No one thought there could be a danger, but the commission concluded that there was a danger."

Did you notice? For inattentive I will clarify. Ukraine did not just care about security. She climbed out of her skin to prevent tragedy. Forbidden to fly low "Boeing". Indicated inadmissibility and so on. Only now for some reason did not close the sky in the danger zone. But for internal use, the Ukrainian authorities are inflating this version to cosmic dimensions.

Then practically the version "for the world community" is repeated. Rocket. Start with "Buka". The explosion near the cabin. Instant death of the crew. That you know and can tell the details even better than me.

The main thing is a rocket! It was the rocket that became the stumbling block of the Ukrainian media. The Russians, as one would expect from an aggressor country, presented it up. We took and stopped releasing these old rockets. And not just stopped, but also banned their use in the Russian army. Even on the teachings. Can explode. But the Ukrainians were not informed about this.

"According to the report, the Boeing-777 was hit by a missile model 9m38m1, the combat part of which is called 9н314m. The missile was released from the" Book MXXUMX "complex and is in service with the Russian army."

Got top secret information? That's the same thing. Russians lie godlessly. They are in service with these rarities. Ukrainians know for sure. It is funny if it were not so sad to read it.

"In the report of the manufacturer" Bukov "concern" Almaz-Antey ", argued that the last such rocket was removed from service and sold to foreigners in 2011 year.

However, this is not the case, these modifications were repeatedly noticed on videos and photos from Russia, moreover, I saw similar missiles in Kamensk-Shakhtinsky of the Rostov Region. From there, weapons were transferred to the separatists in the so-called DNR. Rockets of this type were photographed by Reuters correspondents. "

Here is what the Kiev authorities refer to. All according to the established scheme. Someone somewhere saw something and told about it. True, mean Russians put Ukrainian symbolism on their vehicles and somehow managed to steal cars from Ukrainian territory. But it is not important. The main thing is to refer to. Anyway, 999 people from 1000 will not follow the link. And the one who goes, you can always declare a separatist or an accomplice.

“It is noted that many fragments for analysis were not received immediately and suffered changes while they were in uncontrolled Ukraine. Recall that the militants of the so-called DNR for a long time did not let representatives of the commission to the site of the tragedy.”
"It should be noted that many pieces of debris were not physically reviewed by the Security Council. Within four months, some parts were removed, so it was not possible to get all the wreckage," said journalist Julian Borger.

Well, finally, who hit? Guess from once. Right. Militants DNI. And who else?

"The disaster with MN17 was a planned terrorist act that occurred on the territory of the militants from the self-proclaimed DPR"- said Deputy Prime Minister of Ukraine Gennady Zubko. It's enough. And if to someone it is not enough, and such among readers "IN" I am sure, there will be, then:

"... the zone from which the rocket was launched, according to the report, is 320 square km. To finally determine where the plane was shot down, a separate investigation will be needed.

At the same time, based on the July 2014 battle map of the year, it can be concluded that the complex was located in the territory controlled by the so-called DNR, in the area of ​​Snow. At that moment, namely 17 of July, the Ukrainian army was not in the area. "

It is clear that there is little inquisitive among Ukrainians. Believe it and so. Why stir up old cards? But this issue was discussed at the very beginning of the investigation. Who and where was, at what time. And the Russian MO even posted photos from satellites. But now it is a long past. Almost from the same times when the sea ukry dug.

Hate to read such nonsense? I agree. But even more disgusting that such nonsense falls into the fertile ground zombie ukrogolov. And it is not just growing there, but it leads to dire consequences. You read some "journalists" and you understand that Ukraine is no less dangerous than ISIS. And not only for us. For all! The insult of Ukrainians to Russia is clear. But the resentment of Europeans and Americans will be more interesting.

What will lead to resentment to the whole world? No special mind is needed to understand this. So, it is necessary to strengthen the control over the "Chamber №6". Obviously, the virus "flew off the coils" and clings to more and more goals, speaking on any occasion in the Ukrainian media. The case really begins to smell, if not kerosene, then unmotivated aggression in any direction. So, any crisis phenomena are possible.

Ctrl Enter
Noticed a mistake Highlight text and press. Ctrl + Enter
We are
Results of the week. “Where will I grub?”Results of the week. "Who you are lucky, in fact, and will carry a cock, and such a bird as you, I, too, will rush!"
32 comments
Information
Dear reader, to leave comments on the publication, you must to register.