Russia - the "new sheriff" of the Middle East?

October 15 2015
63
Last week, the head of the Bank of Russia Elvira Nabiullina said that next year would be a turning point in terms of changes in inflation indicators in Russia. According to Nabiullina, inflation will be halved. This opinion is shared by some Western economists, including experts. Barclays Capital Daniel Hewitt. According to Hewitt, inflation in Russia is on a falling trajectory and by the end of the year could fall to about 7-8%, which will enable the Central Bank to once again go to a reduction in the key rate. Speaking at the Russia Calling! Economic Forum, Russian President Vladimir Putin noted that "the peak of the economic crisis has passed," and the Russian economy has "adapted itself to the new conditions."


Has the peak been passed or not, and how true are the statements that next year’s inflation will be twice as low as the current figures? These are all the questions that only 2016 itself will give a real answer, and therefore it’s hardly worth considering . But Vladimir Putin’s statement that the Russian economy has adapted to the new conditions, and it is worth paying attention to specific “new conditions”.

The main “new condition” that has the most significant impact on the Russian economy is not sanctions at all, as some Western “partners” are trying to present. This condition is new oil prices, which have left behind such a thing as “fat oil years.” Under the “fat years”, naturally, we mean the period of time when the price of an oil barrel cost more than two times higher than the current price.
Petrodollars flowed into the economy, however, the fact remains that for some "fantastic" reasons, this huge influx of funds could not start the mechanisms of more or less tangible growth. With prices in 110-120 dollars per barrel, Russia's GDP, if I may say so, “grew” by 1,5% ... As they say: where is the money, Zin? .. “Kubyshka” did not eat everything, defense spending, of course, also, and therefore the question of the “effective spending” of the oil manna that had fallen down in previous years (the very “fat” years) seemed to hang in the air ...

If $ 110 per barrel was not enough for effective economic growth, then due to the unchanged composition of the so-called “economic block of the government”, $ 45-55 will not be enough for the same goals, and is no longer enough. Here, as they say, either “change girls” or take drastic steps that can change the price of oil. Perhaps there are alternatives, but for their implementation, again, the situation may be reduced to the need to "change girls."

“Girls”, as we all see, do not change, which means that the version with the number 2 is working - that is, cardinal measures.

Many economic experts agree that a sufficiently long decline in oil prices with a relatively long holding of the price of a barrel “at the bottom” is a thing that cannot be described by objective economic laws. If so, then keeping oil prices at a very low level, despite the fact that already dozens of American “shale” companies have declared bankruptcy, is largely artificially done. Is there any evidence for this thesis? As confirmation, you can bring information about the affairs of Saudi.

According to the expert of the energy market Buna Pickens, expressed on CNBC, Saudi Arabia is “pulling” an unbearable burden in the form of current oil prices. Pickens (by the way, in 2002, the first expert to forecast oil prices soaring above 100 dollars per barrel), states that the deficit-free budget of Saudi Arabia starts from around 80 dollars, and therefore, if the current quotes are maintained, the CA budget will suffer significantly more Russian, since the Saudi economy planted on oil is much stronger than the Russian. According to the IMF, the degree of fullness of the CA budget from oil sales reaches 90%. And the budget of Saudi Arabia in recent years was made up on the basis of the estimated oil price at the level of 104 dollars per barrel. Not 40 ... Not 50 ... 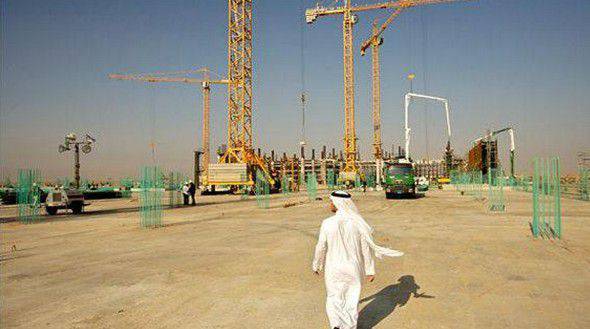 According to the western economist, the Saudis are like those mice that cried and injected, but continued to gnaw the cactus - in the sense that it is theoretically advantageous for them to reduce production volumes so that oil prices go up, but, you know, they do not. The only thing that frankly stops Riyadh is Iran, which, after the lifting of Western sanctions, according to the SA, is able to fill a Saudi oil site, if the state reduces its production volumes.

Arguments Pickens confirmed by the IMF, which issued a forecast for the economy of Saudi Arabia, which Riyadh obviously makes you wonder. According to this forecast, Riyadh will get a budget deficit of as much as 2015% of GDP in 20 - more than 120 billion dollars! This is an absolute record of all recent years for the Saudis. Yes - Saudi Arabia has a giant sovereign fund (in 2014, it was about 700 billion dollars), but only for 9 months of the current year it lost about 100 billion!

In this regard, the frequent face-to-face meetings between representatives of the Saudi dynasty and the Russian president and negotiations on the line of economic departments and ministries of foreign affairs are not only a specific discussion of the military component in Syria. Saudi Arabia is clearly trying to find out from the Kremlin and details about Iran’s readiness or non-readiness to “fill” the world with its own oil. It can be assumed that the monarchs from Riyadh are extremely interested in answering this question, and therefore are looking for opportunities to discuss the situation with representatives of the Russian authorities. Well, not Iran’s Saudi Arabia would be such a delicate thing to be interested in ... In Riyadh, they still think that it’s not comfy to contact with Tehran on economic issues (and on any other issues) ...

Well, not comme il faut, so not comme il faut, Iran responds, and joins the anti-terrorist coalition in Russia in Syria, which is one of the most important arguments in convincing Riyadh of its doubtfulness, given the warm support of "moderate al-Nusrah" , steps.

By the way, the above-mentioned Boon Pickens states that the actions of Russia and its partners in the antiterrorist coalition turn the Russian Federation into a “new sheriff of the Middle East,” who regains influence in one of the key regions of the world from an energy point of view. Does such statements mean that these are the most drastic measures that Russia decided to take to kill several birds with one stone? Including the "hare", which can be called the protection of Russian economic interests on the distant approaches? .. Quite, completely.

We are in Yandex Zen
The head of the Central Bank of Russia acts more intelligently than ours (The Automatic Earth, USA)
Situational analysis of the death of the MH17 flight (Malaysian Boeing 777), made on the basis of engineering analysis from 15.08.2014
63 comments
Information
Dear reader, to leave comments on the publication, you must to register.