What will the next generation Humvee army car look like? (reflections in 16 photos) 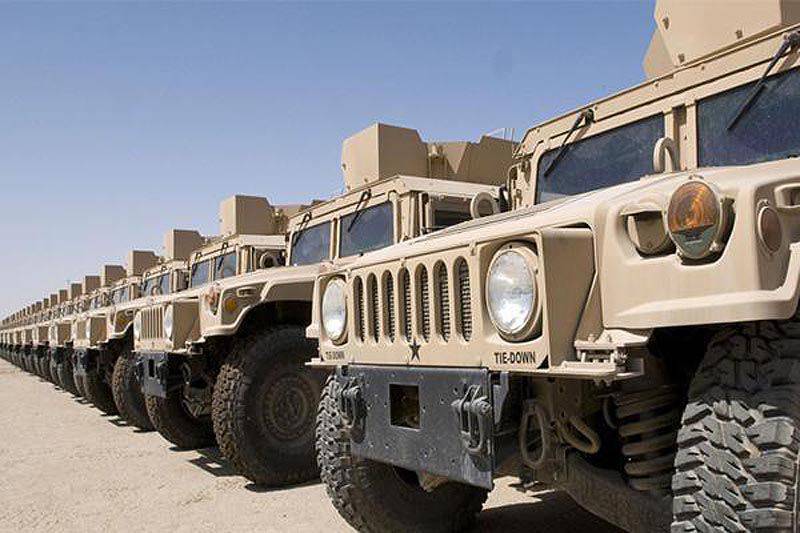 "A Humvee military vehicle in green or yellow coloring is on sale. Great for towing cargo, artillery and soldiers. It can wade across rivers, cross sand dunes and jump over stones. Not recommended for city fights or mined roads. Starting price 7500 dollars." 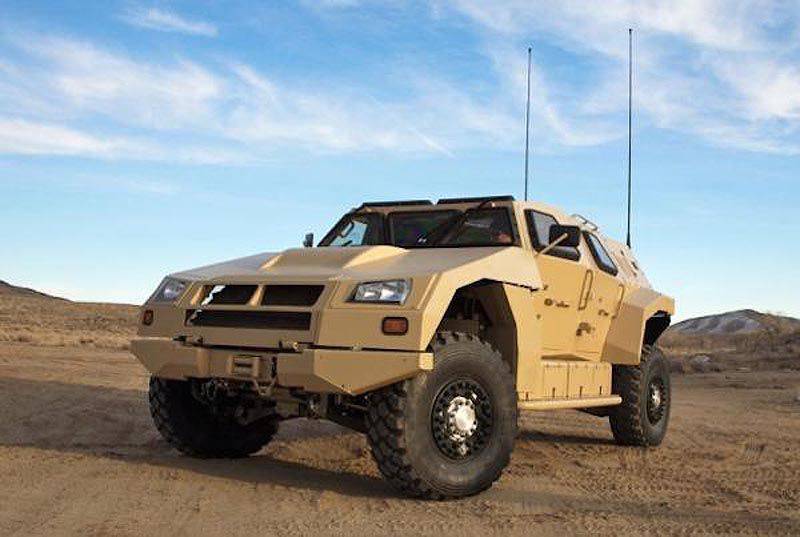 After a legendary career that began with the invasion of Panama in 1989, continued in the Persian Gulf in 1991, then in Bosnia and ended in the wars of Iraq and Afghanistan, the American multipurpose fleet of Humvee vehicles enters into dozens of auctions. This car is an icon of the American military, it replaced the Jeep jeep and spawned a civic fellow with exorbitant appetites, which became a symbol of American ego and extravagance. 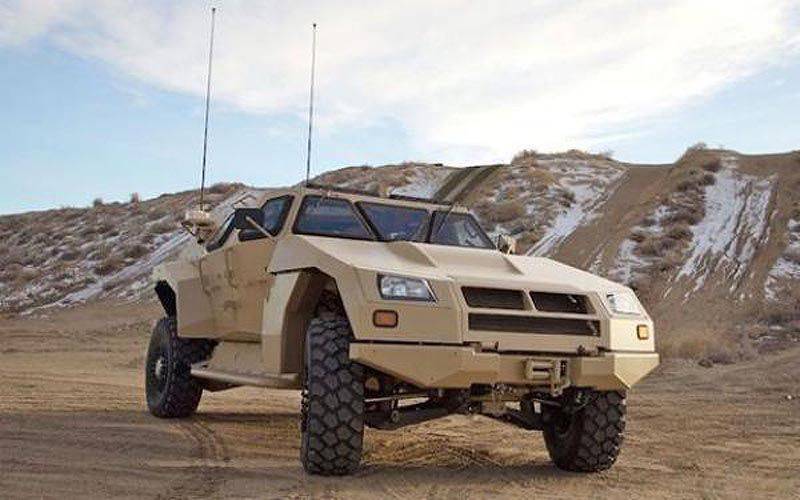 For one very important, big and bold contract, which the army planned to issue a few years ago, three major defense companies are competing. Under the Joint Light Tactical Vehicle program worth 30 billions of dollars, it is planned to manufacture 55000 machines, which should debut and ultimately become one of the most outstanding machines of our time. 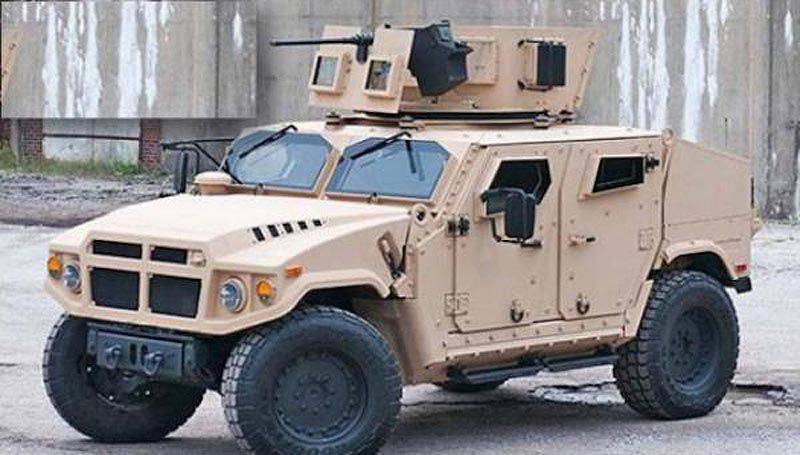 Wars are often measured by statistics: won and lost battles, losses from us and from them, looted cities, captured and lost territories, etc. But they are also determined by their weapons - like a roar tank Sherman was the soundtrack of World War II, and the noise of the blades of the American multi-purpose helicopter Iroquois was the characteristic sound of Vietnam.

And now comes the new candidate for the symphonic confusion of the Next War - a mad scientist mating a jeep with a tank. After ten years of development, the Pentagon is ready to show the JLTV car, created for the battle on the front line and transportation of supplies in the rear. 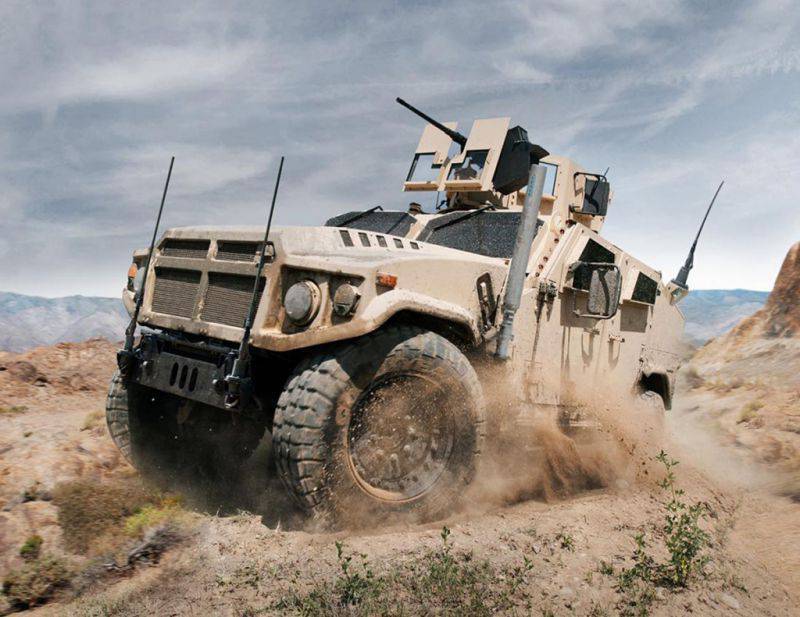 JLTV will be another branch of the family tree, from which Jeep and Humvee have already grown, serving with distinction in many parts of the world, from the Ardennes forests in France to the sands of Iraq. From both cars commercial shoots that quickly integrated into the cultural consciousness of Americans sprang.

Humvee came to the commercial market mostly due to the Terminator himself, Arnold Schwarzenegger, who wanted a powerful commandos car for personal use and convinced the manufacturer, AM General, to make a civilian version. 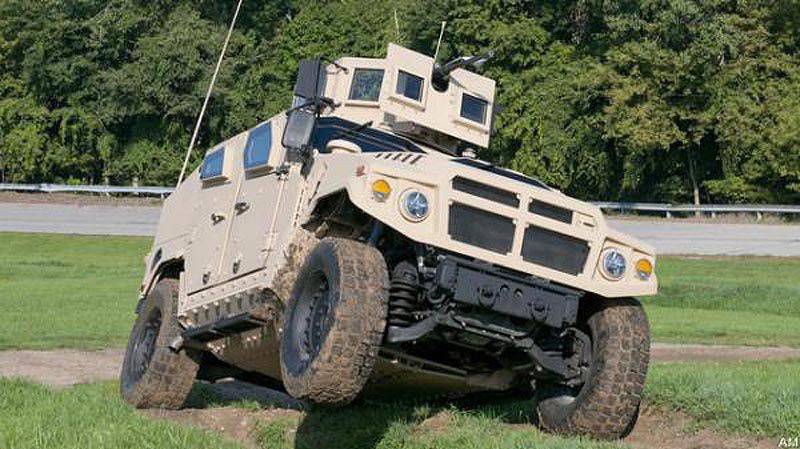 Over time, the American public also fell in love with its muscular form. Stars of the stage and sports, celebrities snapped up these cars like hot cakes.

But while Jeep is considered a symbol of daring, but reliable endurance, the Hummer, on the contrary, since its appearance on the commercial horizon, mocked for its size and exorbitant appetite. Environmentalists strongly resented about this and even burned a dealership in California. 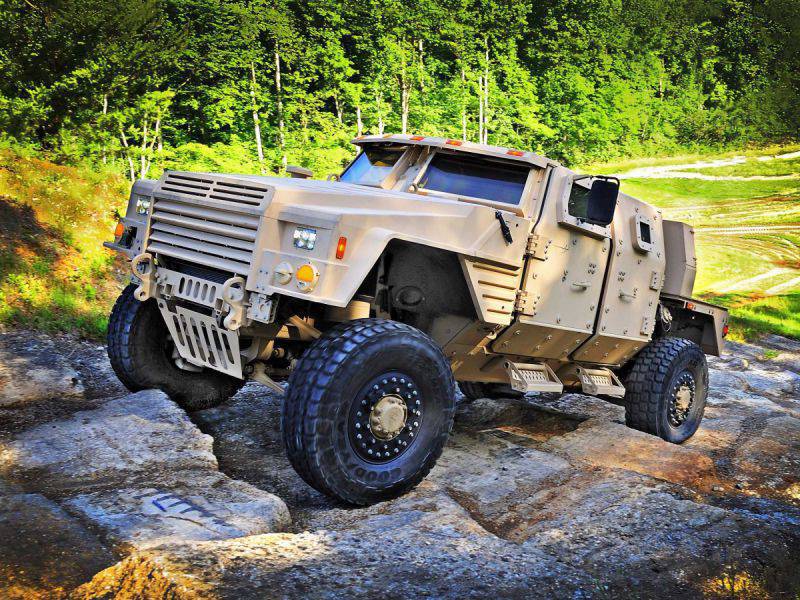 Production was curtailed and the latest Hummer was sold in the 2010 year, ten years after General Motors bought the brand.

Automotive industry experts noted that “it all looked superficial and frivolous and ultimately led to his demise. It's not cool to have a car that eats a gallon on 10 miles (liter per 4 km). ” 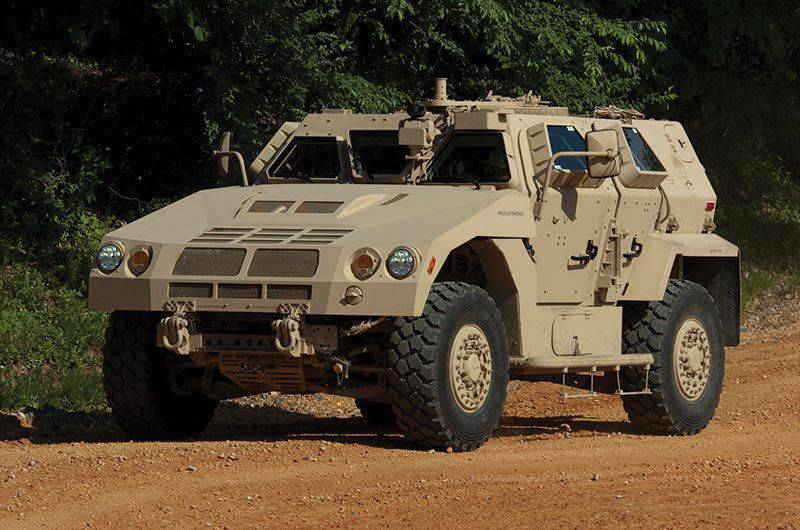 The car Humvee debuted in military operations in the 80-ies of the last century, served in the Gulf War and, according to one military analyst, "soon became the ubiquitous symbol of the US military."

For more than 30 years, AM General has manufactured over 300000 Humvee cars for 60 countries. Recently, contracts have been concluded for hundreds of millions of dollars with foreign countries, including Afghanistan, Kenya and Mexico. 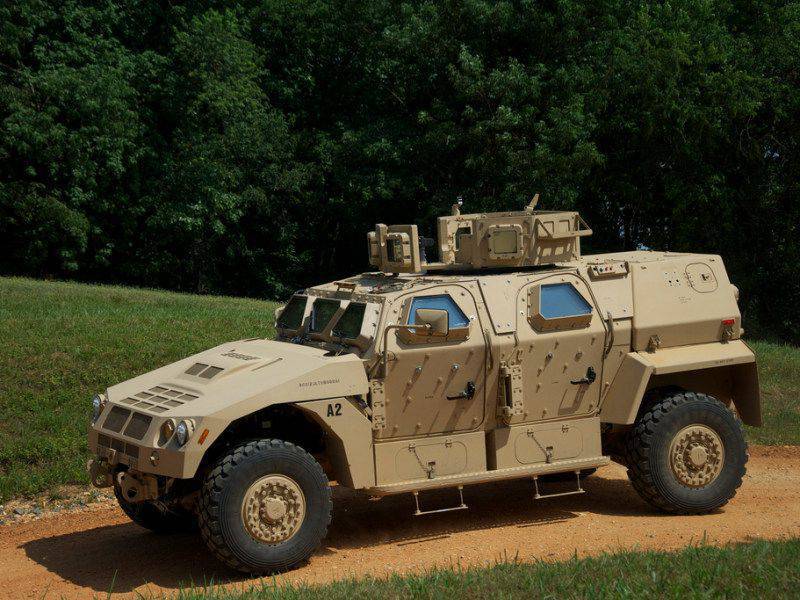 The United States has more than 160000 of these machines on its balance sheet. In addition to Humvee, serving abroad, these machines are also in service with the National Guard and take part in disaster management tasks.

“He sends a very strong signal to the citizens when they see the arrival of soldiers on Humvee cars ... that means help has come,” says one of the senior officers of the National Guard. 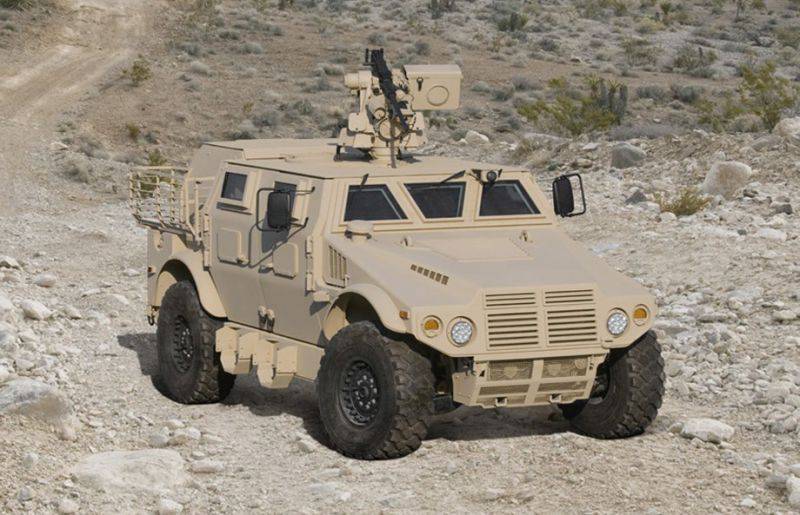 In Iraq, the vulnerability of the Humvee car also became a symbol of a carelessly conducted operation, when the military and the command were not ready for long-term hard work, and the rebels completely blurred the traditional front lines.

As the conflict continued, the military simply brought tanks and other armored vehicles to full wear, after which they had to rely on the Humvee for combat patrols, and these vehicles were not designed for this. 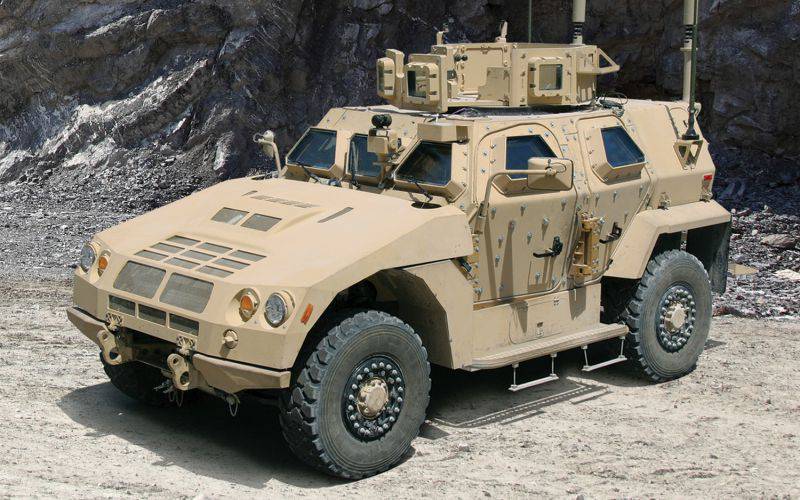 The enemy increasingly began to use hidden directional land mines, as a result, the loss of the American contingent increased, especially in those units that moved on unprotected Humvee. The soldiers used what they called “village defenses” to reinforce their cars, finding suitable pieces of metal at landfills and screwing them to their Humvee.

In one of the divisions, the Humvee was called "Rosinantami", as Don Quixote's horse - a symbol of pre-Flood.

In 2004, the soldier of the National Guard of Tennessee asked the Secretary of Defense Donald Rumsfield about this, telling him directly that "our vehicles are not protected." 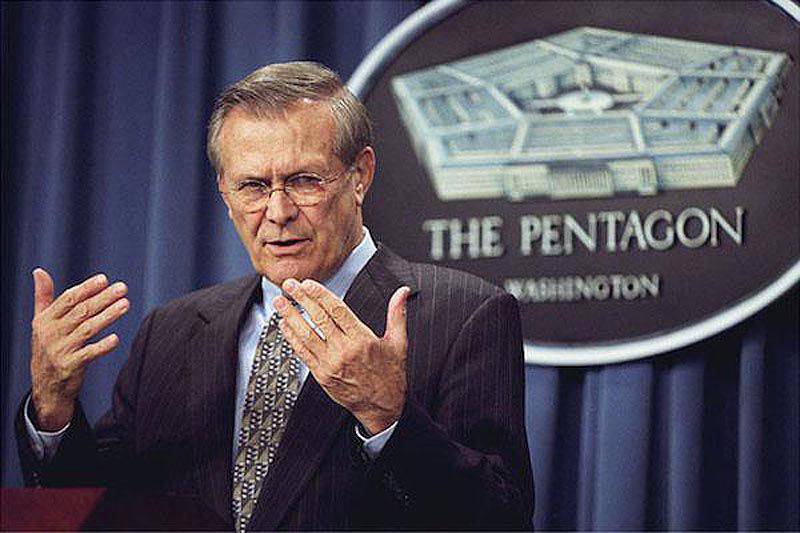 “We are digging up trash heaps of rusted pieces of iron and sorting through discarded broken bulletproof glass with traces of bullets and shards. We pick it all up, he said, we choose what's better, put it on our cars and go to fight them. ”

Rumsfield now replied with the famous phrase: "You go to war with the army that you have."

The Pentagon then quickly began to book a Humvee and buy thousands of heavily armored MRAP vehicles (Mine-Resistant Ambush Protected - with increased protection against mines and improvised explosive devices). But even engaging in these tasks, the next generation car, already known under the designation JLTV, was already planned there. 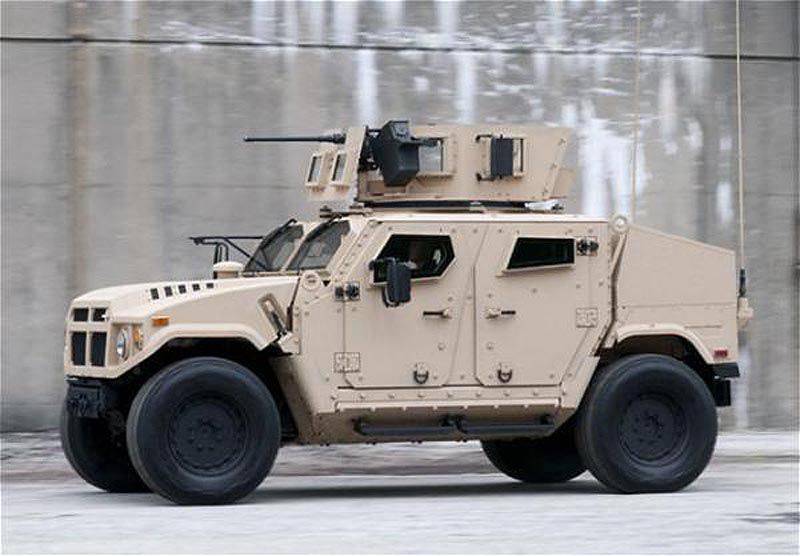 It was assumed that it will also be mobile as an unarmored Humvee - a powerful SUV that can withstand the same explosion as the MRAP, while towing a heavy load.

This project attracted the attention of three defense giants, one of whom was supposed to issue a contract this summer. AM General manufactured Humvee, Oshkosh manufactured MRAP and Lockheed Martin, the largest defense contractor in the world. 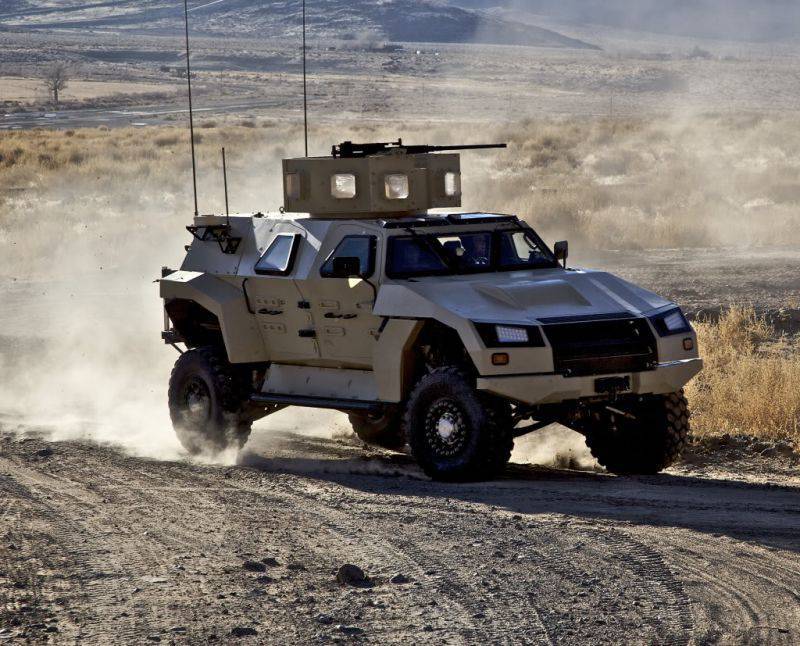 Lockheed is mainly known for its aerospace business; it produces the F-35 Joint Strike Fighter. However, a company based in the state of Maryland was invited to the program because “it was considered a particularly interesting engineering proposal,” said the vice president of the ground-based machinery division. “The goal here is to take the capabilities of different machines and combine them into a significantly smaller system.”

New vehicles that the Marine Corps will purchase in much smaller quantities will not completely replace the Humvee, which will remain in operation for several years. But many cars after several years of hard work need to be repaired. Under contracts with the Pentagon, about 50 Humvee machines are sold at auctions every week. And 75 percent of revenue goes to the ministry of defense. 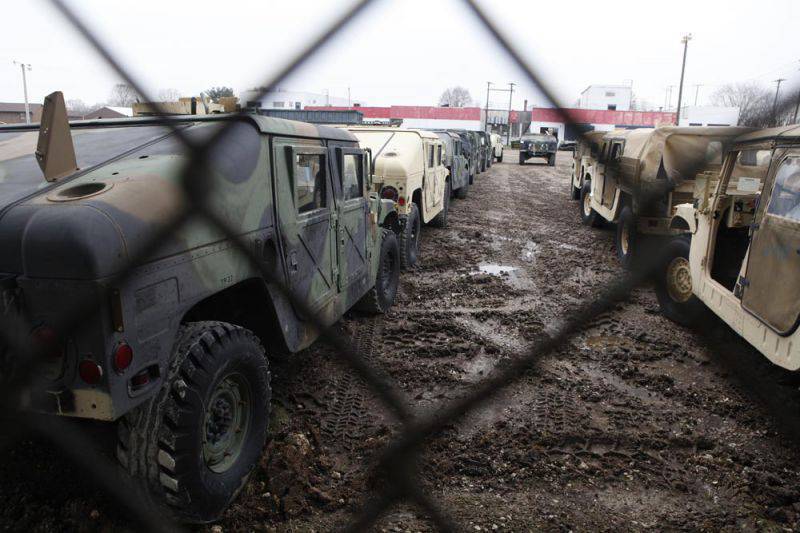 Buyers are mainly ranchers and farms, collectors and enthusiasts who want to have their piece stories.

“The demand is very high. At some auctions, applicants are fighting for 10-12, of course the price of the car increases significantly, ”said one of the leaders of the auction site.

One college student in Maryland recently bought a car for 10000 dollars. He fiddles with him in his father’s garage and sometimes rolls around the surrounding hills around the farm.

“It is perfect for forest trails,” says the student, and at the same time he sighs heavily. “It’s a pity that everything will be limited to them, because it is illegal on the roads.”

We are in Yandex Zen
High-mobile army car GAZ-39371 "Vodnik"
US Army Opens Field Artillery for Women (reportage in 15 photos)
32 comments
Information
Dear reader, to leave comments on the publication, you must to register.