Send signal to the "islanders"

October 16 2015
51
Another idea of ​​the Pentagon is to send warships to the Spratly archipelago in the South China Sea. There, the Chinese with might and main concreted reefs and even built an airfield. To send ships means to give Beijing an unambiguous signal: Washington does not intend to put up with the attempts of the Celestial Empire to control the South China Sea. Demonstration of American power on the water should take place in the coming days. 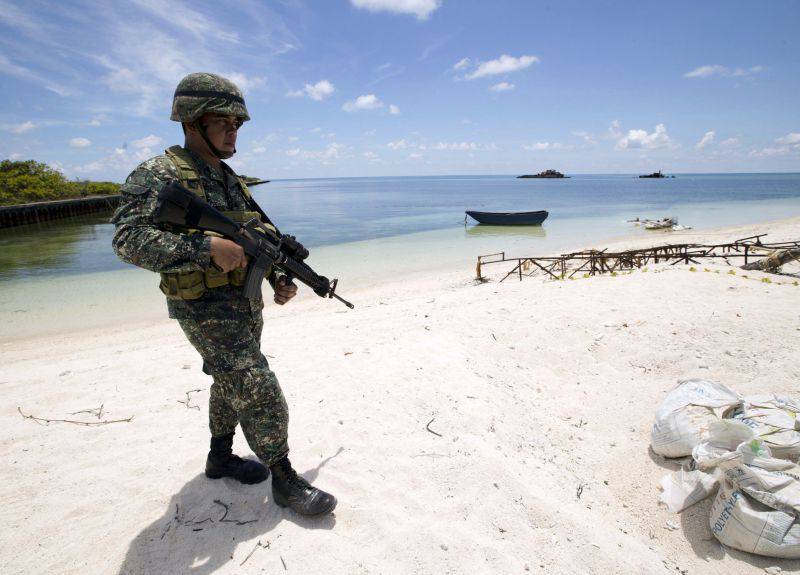 Recall that China claims a significant part of the South China Sea within the boundaries of the nine-dotted line: the Spratly archipelago and the Paracel Islands. These islands also consider Malaysia, Vietnam, Taiwan, Indonesia and Brunei. The “appropriation” of islands and the marine zone by China, which is leading the construction of artificial bulk structures, does not like the United States very much. Washington believes that the Chinese may interfere with the freedom of navigation in the area.

Late evening on October 13 RIA News" reported from Washington about the statement by US Secretary of Defense Ashton Carter. He said the United States will continue operations in the South China Sea. Washington objects to the policy of the PRC to build artificial islands and to determine the 12-mile zone around them.

A few days earlier in a British newspaper "The Financial Times" A report by Washington correspondent Demetri Sevastopulo was published. The material is devoted to countering the US construction of Beijing in the South China Sea.

The United States is ready to send ships to the Chinese artificial islands in the South China Sea. Thus, Washington intends to give a signal to Beijing: America does not recognize Chinese maritime territorial claims.

A high-ranking US official (not named) told the Financial Times that the ships would pass in the 12-mile maritime zone off the Spratly archipelago, which China considers its own.

This step, the newspaper notes, is likely to increase tensions between the two powers. Moreover, the information appeared amid controversy over commercial cyber espionage (the US claims that China is engaged in such espionage).

Sevastopulo recalls that China’s “self-affirmation” in the South China Sea has increased in recent years. The US fears that the Chinese will encroach on the freedom of navigation in the sea area, through which 30% of world trade passes. Over the past two years, Beijing has stepped up its "maritime activities," the author writes, turning thousands of acres of land into runways and building a number of military installations.

Military experts say that the construction of artificial islands is aimed at strengthening the maritime presence of the PRC. By expanding the boundaries, the Chinese fleet will be able to operate far from its native shores, especially outside the so-called first island chain.

Moreover, Chinese warships appear in waters close to the United States. Last month, five vessels traveled off the coast of Alaska; Obama was on a visit to the Arctic region, and the nearest Chinese fleet arrived to the continental US "without an invitation."

US Secretary of Defense Ashton Carter for several months in favor of decisive naval action. The White House resisted this initiative, fearing that such events would "escalate the situation in the disputed waters of the South China Sea." But in the end Obama agreed with Carter. A positive decision could have been affected by the “freezing” of issues that were not resolved during Xi Jinping’s visit to the United States. For example, at the joint press conference with Comrade C. last month, the US president said that he expressed "serious concern about the land reclamation, construction and militarization of the disputed territories."

The new American course, the journalist believes, is aimed at strengthening the position of the United States, according to which China’s territorial claims do not comply with the norms of international law, including the United Nations Convention on the Law of the Sea.

Speaking recently in Australia, Admiral Scott Swift, commander of the Pacific fleet The United States, criticized China, not calling it directly, but stating that "some countries interpret the freedom of the seas as an opportunity for conquest." According to the admiral, a similar trend is "particularly egregious in the contested waters."

China, we add, has reacted violently to such newspaper stories. news. The press appeared the statement of the Chinese Ministry of Foreign Affairs.

Chinese authorities said they would not tolerate violations in their territorial waters. "We will not allow any country to violate the Chinese water and airspace over the Spratly Islands in the name of protecting freedom of navigation and flight," "Vesti" the words of the representative of the Chinese Ministry of Foreign Affairs, Hua Chunyun, said by her at the daily briefing. “We urge all interested parties not to take any provocative actions and prudently take a responsible position on issues of regional peace and stability.”

These are words. And the case? How can Beijing respond to US actions at sea?

In conversation with Nezavisimaya Gazeta Konstantin Kokarev, first deputy director of the Russian Institute for Strategic Studies, said that during Xi Jinping’s visit to the US, he and B.H. Obama agreed to turn points of divergence into points of cooperation. The Chinese media highly appreciated the results of this visit. Beijing is counting on the development of bilateral relations, the expert believes. Special emphasis is placed on the fact that an investment agreement will be signed, and it will then give impetus to the development of the economies of both countries.

On the other hand, let us add, the demonstration of the naval military force of the USA must be followed by something appropriate. Or, as they say now on the Internet and on the street, adequate. Words against warships are equivalent to defeat.

Will we witness the sea response of China? Have any Chinese warships been "without an invitation"?

Observed and commented on Oleg Chuvakin
- especially for topwar.ru
Ctrl Enter
Noticed a mistake Highlight text and press. Ctrl + Enter
We are
The Pacific front takes shapePreliminary evaluation of the prototype of the unobtrusive Chinese fighter Chengdu J-XX [J-20]
51 comment
Information
Dear reader, to leave comments on the publication, you must to register.