One hundred British against Russia

October 15 2015
47
The "Financial Times" recently appeared remarkable news: The UK will join Germany and the United States in the Baltic region to "deter Russian aggression." The term of the deployment of troops has not yet been determined. How many warriors does the United Kingdom intend to set against the “aggressors”? The newspaper writes that the number of "British contingent" - about a hundred soldiers. 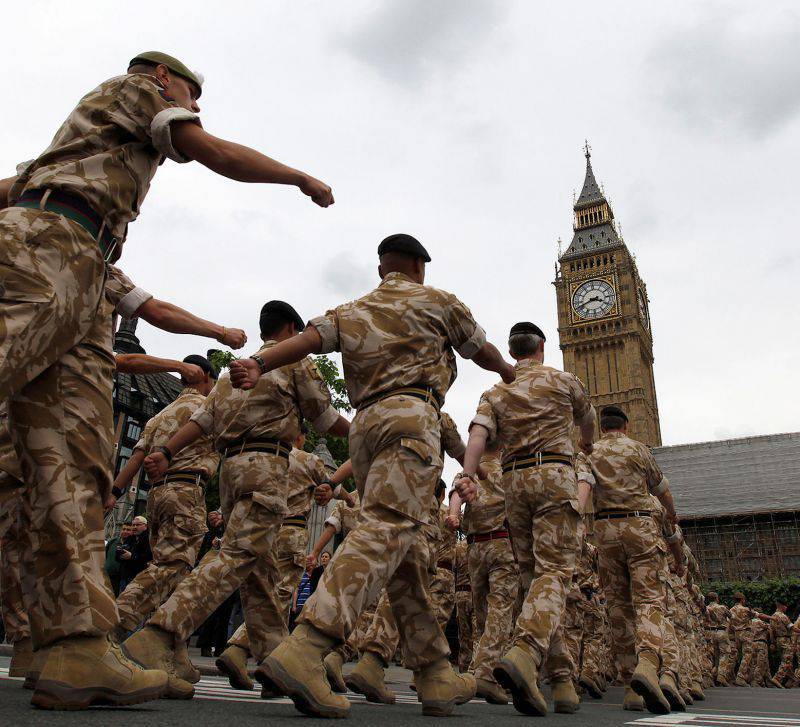 This is told in "The Financial Times" Sam Jones, editor, defense and security.

The first paragraph of the material states that the UK will join Germany and the USA in the long-term deployment of troops in the Baltic countries with the objectives of "deterring Russian aggression" and "strengthening the eastern borders of NATO." Officially, the Minister of Defense of the United Kingdom Michael Fallon will announce this at the quarterly meeting of NATO defense ministers in Brussels.

The term of the deployment of troops is not specified. However, it is known that British troops will be deployed "on a rotational basis." This will allow the United States, Great Britain and Germany to “avoid accusations” of violating agreements concluded with Moscow after the end of the Cold War (concerning the stationing of troops on a permanent basis in the former eastern countries of the Soviet bloc).

Moscow almost certainly does not like this move, the editor believes. Russia has long accused NATO of attempting to militarize the territories along its border.

An official from the Department of Defense of the United Kingdom (name is not named) said that the contingent will initially be approximately one company, or about 100 military personnel. Such a modest number of British warriors reminded Sam Jones long pages stories, namely the Napoleonic wars. Apparently, the reduced number of British soldiers will soon be comparable to their number in the days of Bonaparte.

Nevertheless, Secretary of Defense Michael Fallon believes that the United Kingdom is “committed to a policy of supporting the sovereignty of the democratic states of Eastern Europe.” This was reported by the publication of the "source", familiar in the speech written for Fallon.

Fallon is full of belligerence and recalls the deployment of aviation units in the Baltic countries, as well as the fact that London is implementing a training program for soldiers of the Ukrainian armed forces. The Minister of Defense plans to expand the last mission. Currently, 75 British military instructors are working in western Ukraine, teaching Ukrainian soldiers to 1600. Back in August, Mr. Fallon declared the need to "double the project's possibilities."

One hundred British soldiers who will be sent to the Baltic will take part in regular exercises together with Estonian, Latvian and Lithuanian forces.

Earlier, British troops took part in the largest military exercises in Estonia (May 2015), in which "13.000 military participated, imitating a reflection of the invasion of a major foreign aggressor," reminds Jones.

In 2017, the UK will also take command (as the lead nation) by the NATO rapid reaction forces, created by the decision of the 2014 summit in Wales.

The reader has long had a question: what role can a hundred people play (more precisely, about a hundred) in “deterring aggression”? What is this company of British lads, who, apparently, are able to protect the entire Baltic States?

Experts believe that the proposed placement of a company of soldiers is just a “symbolic” gesture.

“This UK decision is a purely symbolic gesture,” said "Free Press" Boris Shmelev, Head of the Center for Political Studies at the Institute of Economics, RAS; Head, Department of International Relations, Diplomatic Academy of the Russian Foreign Ministry - He has to show that England shares the fears of its NATO allies about the possible aggression of Russia against the Baltic countries. This decision also reflects the mood of a significant, perhaps even most of the English establishment, which sees Russia as its adversary and even a potential enemy. Of course, the United Kingdom in this case acts in the wake of US anti-Russian policy. But, on the other hand, the island empire has a long-standing policy experience aimed at the so-called containment of Russia. If we look at history, we will see that today the United Kingdom, with amendments to contemporary realities, acts in about the same way as a hundred, and two hundred years ago ... "

According to the expert, Britain and the West as a whole have the most important task: in the words of Brzezinski, remove Russia from the geopolitical chessboard. Boris Shmelyov believes that by deploying military personnel at the borders of Russia, the United Kingdom closes the opportunity for itself to improve relations with Russia "in the foreseeable future."

A similar opinion was expressed by the director of the Center for Strategic Conjuncture Ivan Konovalov. According to him, the deployment of small contingents along the Russian borders "has a purely symbolic meaning." On the other hand, the expert “has the feeling that the West itself has convinced itself that Russia is leading a hybrid war in Ukraine and can repeat something similar in the Baltic States”. And small NATO contingents will prevent the possibility of a “Crimean scenario”, for example, in eastern Estonia.

“The West itself conducts hybrid wars all over the world, and now it seems to him,” the expert noted, “that Russia behaves in the same way. I would not be surprised if we are soon accused of starting a hybrid war in Syria. ”

To this we must add what the experts have forgotten to say.

The above-mentioned editorial article from The Financial Times mentions a “rotational base”, on which British troops will be stationed in the Baltic States. Actually, not only British. And such an approach would allow Britain, Germany and the United States not to violate the agreements concluded with Moscow at the end of the Cold War. On the other hand, the British or Germans, having accustomed the Kremlin to the idea of ​​rotating their “hundreds” in the Baltic region, can further increase their contingents, not forgetting to inform the Russians about the principle of “rotation”. In short, happy Estonians can sleep well.

Observed and commented on Oleg Chuvakin
- especially for topwar.ru
Ctrl Enter
Noticed a mistake Highlight text and press. Ctrl + Enter
We are
British MANPADSWill Russia try to get Estonia, Latvia and Lithuania? ("The Financial Times", UK)
47 comments
Information
Dear reader, to leave comments on the publication, you must to register.