Why did the Old Man lose? 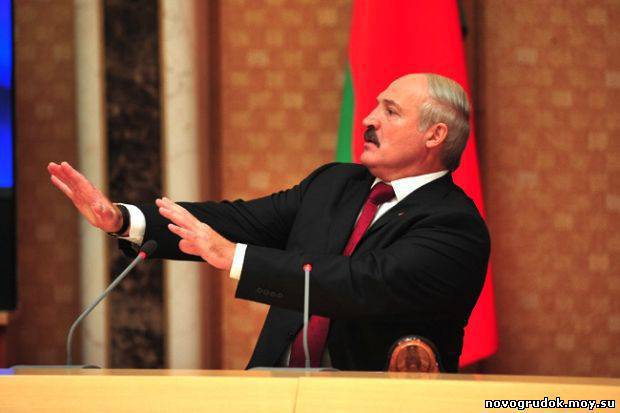 The desire to live in an interesting time has become commonplace. It is in it that the inhabitants of the former USSR have been living for the last 25 years. If you only know what will replace the stagnation! Alas, the future is unknown. Now that the dust of the battle has dissipated a bit, we can evaluate its results in the post-Soviet space. I will not write about Turkmen bashi. East is a delicate matter. I will write about Belarus close to us. And about its permanent leader.

To understand what happened there in the end, you need to understand what was planned there. Not being a supporter of the "conspiracy theory" and the X-files, I will still try to slightly remove the covers from the mystery of the origin of the Republic of Belarus.

It seems to me that in the catastrophic situation of 1991, the Kremlin’s wise men made a number of correct decisions (bow to them). First, do not try to recapture eastern Ukraine and northern Kazakhstan. Otherwise there was a chance of slipping into the Yugoslav scenario. Secondly, in Belarus, as a Russian-speaking and as friendly as possible republic, it was decided to help it stand on its own feet as an independent state.

In my opinion, an attempt to keep the territory of the perishing empire "to the maximum" could lead us to protracted conflicts without the prospect of restoring that very empire. Maybe it was not so, it is difficult to judge now. But for Belarus they decided to spare no resources. What, in fact, could be a profit? Apparently, it was planned to have a prosperous, friendly state in the western direction, the most dangerous in the conditions of the spread of NATO.

Money, resources and access to the Russian market were to ensure the start of Belarus in a brighter tomorrow. We are good, we help everyone. The task was, in my opinion, exactly that. Russia in the west borders on a prosperous Belarus that is pro-Russian. A strange approach, but it could work.

It turned out with Lee Kuan Yew in his time. If you think that everything happened in Singapore by itself, you are mistaken. Sometimes countries are constructed artificially. And perhaps, the starting conditions for Belarus were no worse than Ukraine, and better than Russia. A small, highly developed country with an educated cultural population. Located on the way from Moscow to Europe and back. Beauty, and only. It could be interesting.

But it did not work out. The fact is that the father quickly understood: rich means independent. The development of business in Belarus (and the conditions were not bad) meant the reduction of the power of the official Minsk. So it turns out everywhere and always: a group of businessmen with large incomes begin to remake the country for themselves. We went through it in Russia. So, the old man crushed the enemy in the bud, regulating the business to zero.

And all the fullness of power remained in his tenacious hands. But with the economy, alas, nothing happened. It did not work with the Belarusian economic miracle. What Belarusians like to talk about so much (the economic stability of 90's) was bought at the expense of the banal consumption of that “starting capital”. The same money and resources needed to be invested in the launch pad of Cape Canaveral, but Lukashenka “wisely” spent them on maintaining the “USSR in miniature”, led by itself, beloved.

Belarusians are very grateful to him for this. Why, at the time when privatization with criminalization was raging in Russia, everything was quiet and calm in Minsk. Here are just a dad tritely let down the money, time and opportunities that he had. Instead of creating a Slavic Singapore, he spent money on the creation of a paternalistic district-saber.

There is no large, independent business, there are no political competitors, Russia is an alien, hostile state. But there is no economy. And Russia is simply pointless to pour new money there. And at once for two reasons: the first - the previous injections did not lead to any positive changes, the second - Belarus is politically all further from Russia. Not only the West, but Lukashenka also recognizes the power of Petro Poroshenko in Ukraine (and no “separatists” there). In the Ukrainian tragedy, the “ingenious strategist Lukashenko” saw only one thing - an attempt on the power of Moscow of the same prince as he did. And corporate solidarity worked.

Lukashenko’s propaganda is actively working for him and is also actively working against “aggressive Russia with corrupt officials and evil business sharks.” There is one salvation from them - Alexander Lukashenko. I would like to emphasize: Lukashenko is one thing for Russians, and the Belarusian people is another. That is, I would still like to separate flies from cutlets, and Belarus - from its permanent leader.

Ctrl Enter
Noticed a mistake Highlight text and press. Ctrl + Enter
We are
A great interview with Sergey Lavrov: about Ukraine, Obama and IranWhat you didn't want to know about England
132 comments
Ad