I read the article about the battle of Lepanto and immediately thought that I had something on this subject, moreover, I was looking for this “something” on purpose, and when I did, I was very happy. Yes, and how not to rejoice when your eyes suddenly see that Real galery itself, which was the flagship of Juan of Austria in the famous battle of Lepanto! 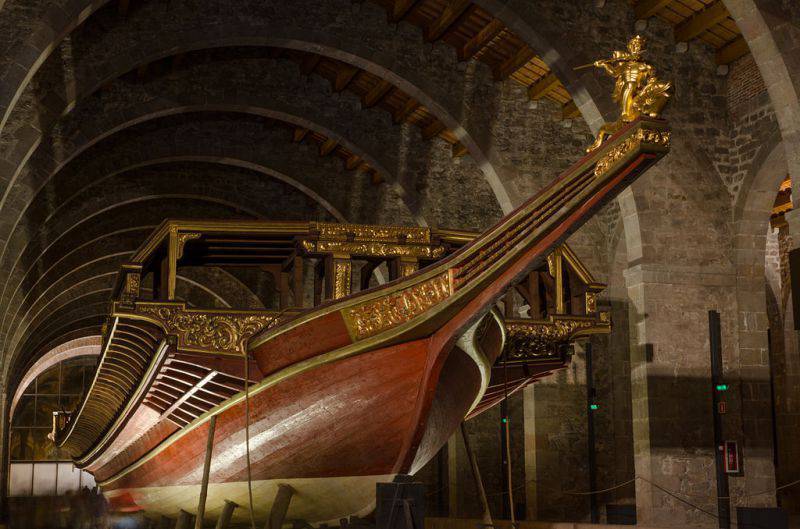 Gallery "Real" in the Maritime Museum of Barcelona. Front view.

But the most interesting thing is that this ship has not come down to us since those times (well, how little it was, how carefully it was saved!), But its exact copy, and quite simply - “well, a very large model”!

Most people believe that the model of the ship is just a “toy”, the main advantage of which is its miniature. Meanwhile in stories There are many examples of building models that are no smaller in size than the original. So, the Maritime Museum in the city of Amsterdam in 1992 ordered a full-size copy of the largest sailing ship of the Dutch East India Company, built in 1748 and crashed off the coast of England in the first voyage. Three hundred years of St. Petersburg was marked by the construction of a replica of the first Baltic frigate “Standart”. Well, the most recent example of such a “simulation” is in the People’s Republic of China. There, in 2005, the battleship Dingyuan, formerly the flagship of the famous Beiyang, froze at the sea pier of Weihai City, Shandong Province fleet Qin empire. The ship itself was built by order of China in Germany in 1883 - 1884. and at that time was one of the most modern ships of its time. In 1885, the Dingyuan arrived in China with the same ship Zhenyuan, and then for 10 years was the flagship of the Beiyang fleet, based in Weihaiwei (modern Weihai). At the beginning of 1895, it was badly damaged right in the harbor by Japanese torpedoes, and before its delivery it was blown up by its own team. 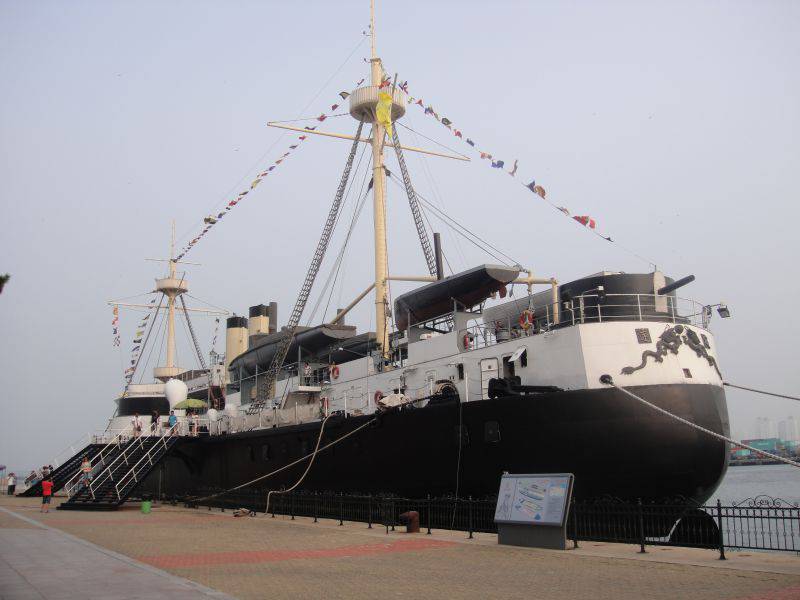 The Chinese battleship Dingyuan is also a ship museum. There are guns, but the engines are missing in principle. It was difficult and expensive to make them!

21 December 2002, the Weihai Port Authority, organized a scientific and practical conference where naval history experts and shipbuilders from all over China developed the basic principles of the whole upcoming work to recreate this battleship. And exactly one year later, work began on him at the Hyde shipyard in Rongcheng City in Shandong Province. 13 September 2004 of the year the ship was launched, and 15 on April 2005, he was already on the Weihai raid. The battleship was built with all sizes: length 94,5 m, width 18 m, draft 6 m. With a displacement of 7220 tons, Dingyuan today represents the largest in the world model ship of the historical scale 1: 1. Although the ship was built using electric welding, rivets are visible on the side plating sheets, although the rowing vessels and small-caliber guns do not look very reliable. For the manufacture of deck flooring and gangways, too thin metal is taken: because of which, the roar when walking on it simply stuns. But 12- and 6-inch guns are made very well: in the trunks even rifling can be seen, and on the breech - factory marks Krupp. It is strange that it is possible to enter the barbets of the main caliber, but for some reason it is impossible to enter the medium towers - which are located on the bow and stern! But you can be photographed near the massive oak wheel with the inscription in English: "Imperial Chinese Navy". 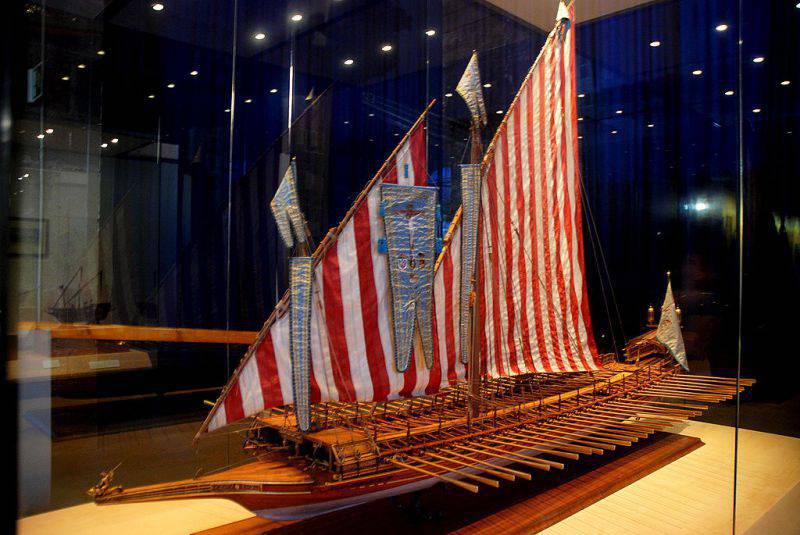 Galera "Real" - scale model in all its glory.

Well, the Real Gallery was created much earlier, namely in the 1965 year, on the eve of the 400 anniversary celebration of the battle of Lepanto. Then the director of the Maritime Museum of Barcelona, ​​Jose Martinez-Hidalgo, proposed to recreate this ship and thus perpetuate its memory. Worked on the drawings for several years, using as sources ancient descriptions, drawings, prints and models that have come down to our time. Thanks to all this, they were able to build the most reliable "model" of a sailing-rowing ship of the XVI century, which was launched on the anniversary of this celebrated 7 battle of October 1971 of the year. Well, today this gallery is located in the Maritime Museum of the city of Barcelona. 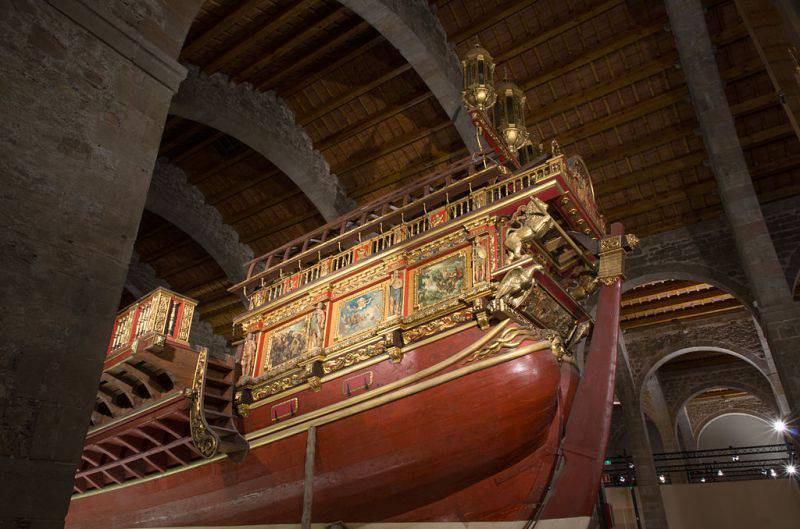 Carved and gilded stern of the vessel. 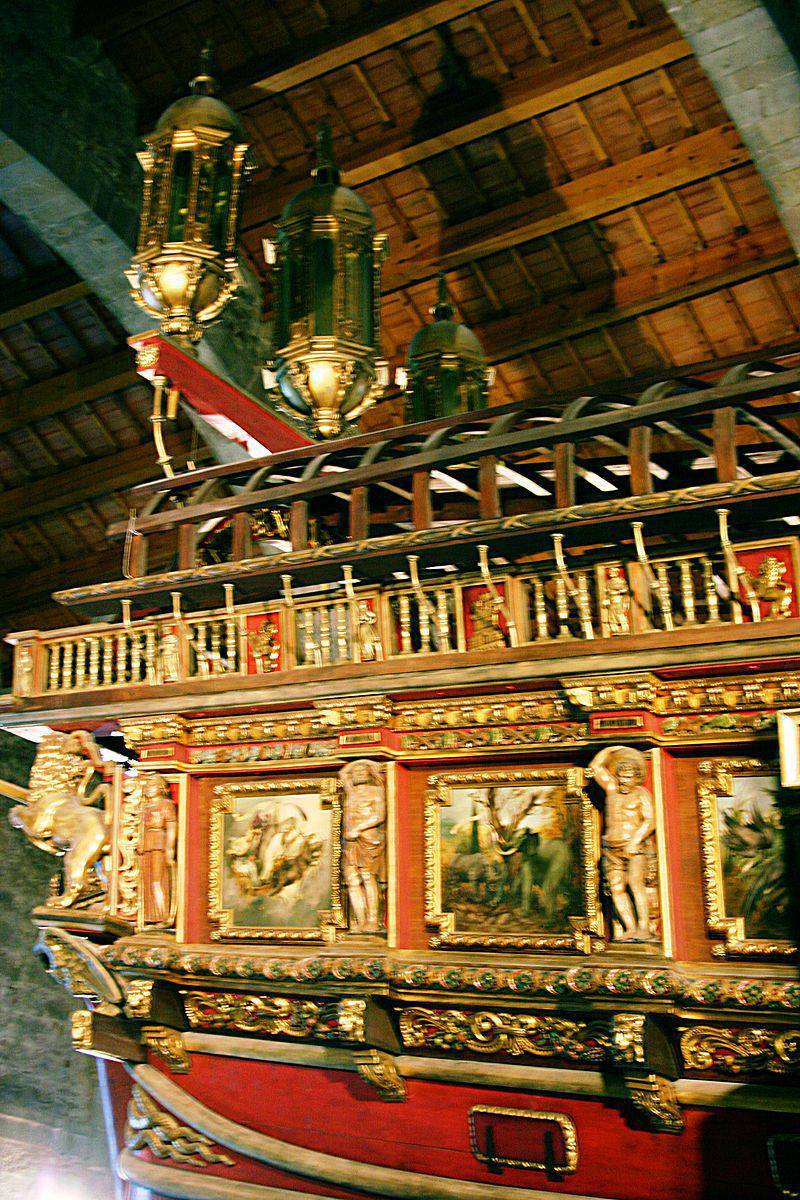 Well, the paintings in the stern will honor any museum, although they are just copies of the works of the then masters.

About the fact that she was there, I naturally found out in advance, before going there. I bought a map of the city, climbed out of the metro station at Citadel Station, and then walked through the park, along the embankment, past the Aquarium, the Columbus Monument and the yachts at the pier. And here it is - the Barcelona Maritime Museum - a few “hangars” where real ships once were built long ago. So the place is very convenient, you can say "smelled of the spirit of history." After the urban heat and stuffiness inside it seems even cool. You pass the hall ... and here it is right in front of you. And not just in front of you, but hanging over your head, like a huge gilded palace! Moreover, it is only the body. Because the ship is under the roof without masts. 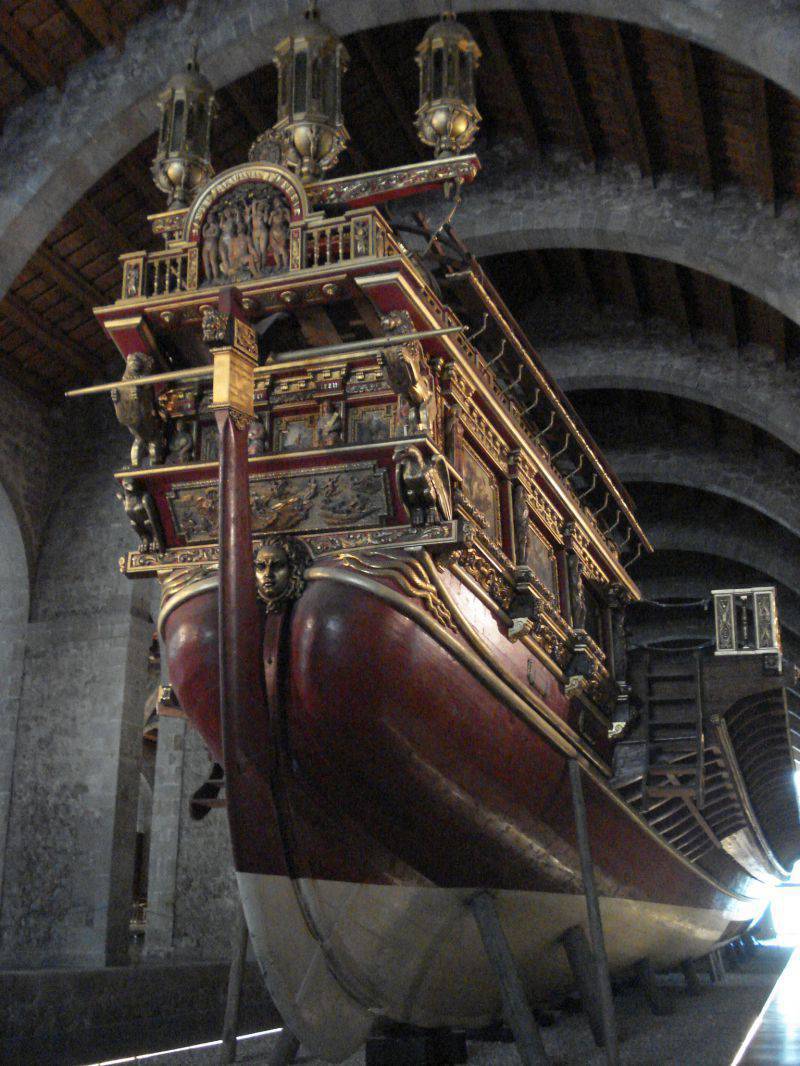 As is known, in the battle with the Turks, with their flagship gallery "Sultana", the latter rammed "Real", so much so that its ram penetrated into its body to the fourth bench. However, the Turks did not help. The Sultan was boarded, and the Prophet’s green banner, given by Sultan Selim II to the commander of the Turkish fleet Ali Pasha, and 150 000 gold workshops were seized on it. 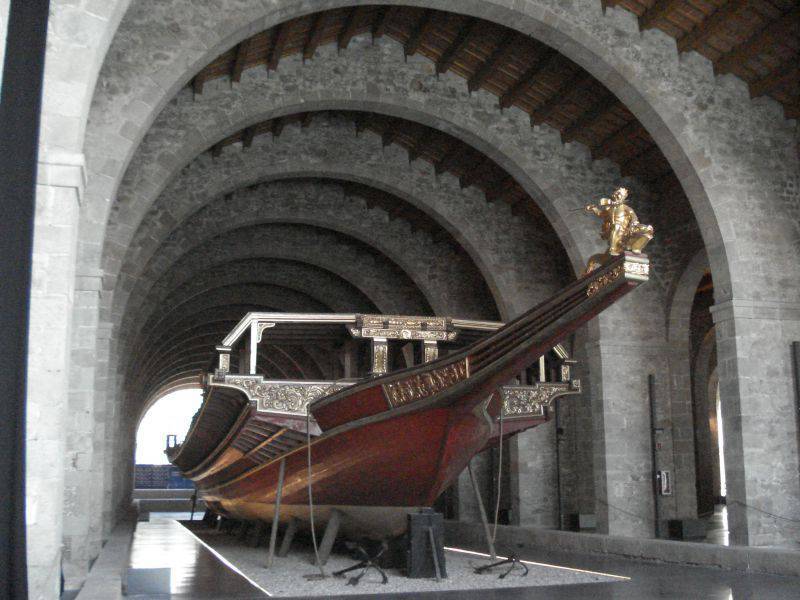 View from the nose, on the left.

In addition to these details, it was known that Real was built as a 30-canned two-mast galleys in proportions characteristic of vessels of this class and of its time, with all its characteristic advantages and, of course, drawbacks. The narrow hull with a slight draft, but with a wide upper platform, placed on the brackets protruding overboard allowed a decent speed to be achieved, but because of this the galley was not sufficiently stable and seaworthy. "Real" could really be used only in calm weather, and with strong wind and excitement had to wait in the bays and ports, anchored. 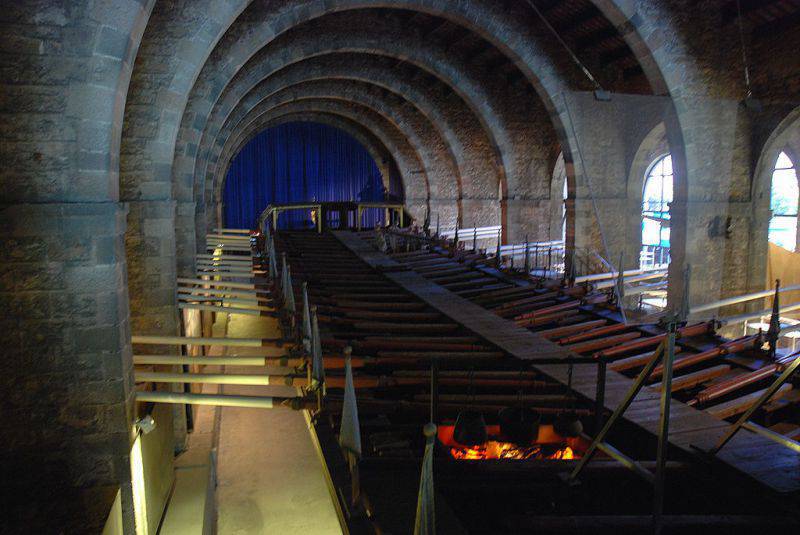 View of the galley deck.

But the decorative decoration of the galleys was unparalleled, that is, maybe it knew (it was not for nothing that the French called the first English battleship Royal Sovereign ”the Golden Devil”, there were so much gilding and all kinds of carved figures there!) did not reach us. It was decorated in the Baroque style, which was just coming into fashion in Europe, which made this ship a real work of art. 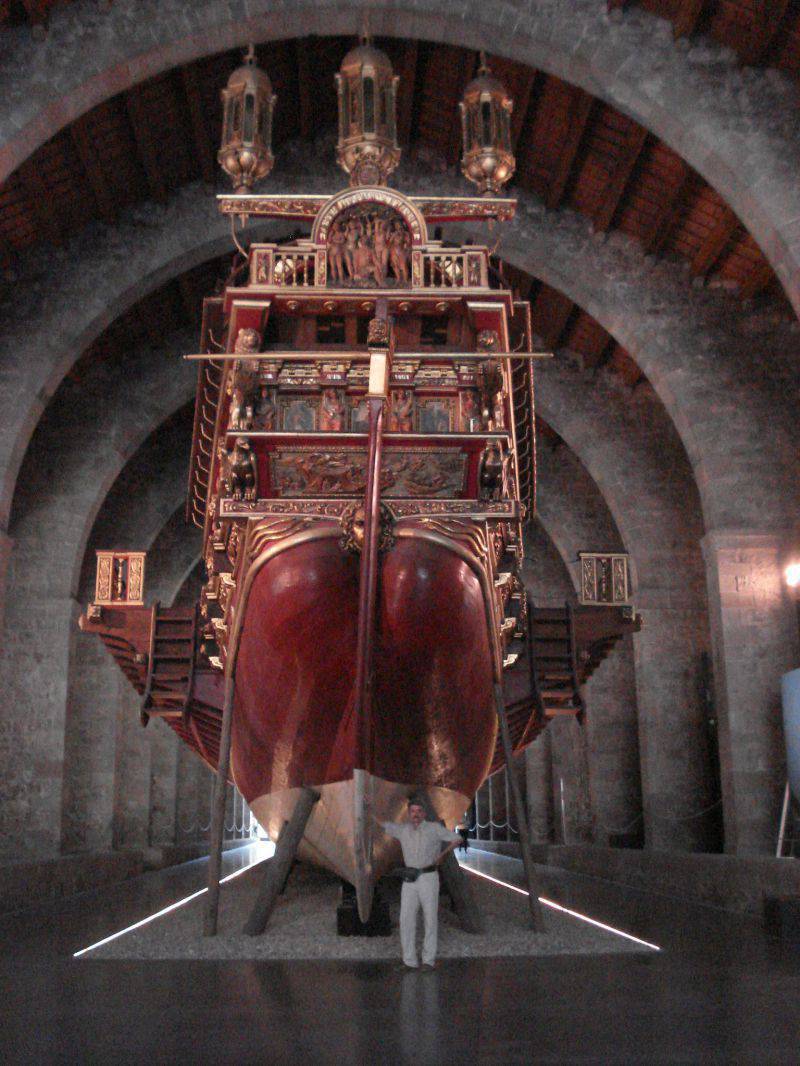 But shooting backlit. Next to the scale is the author.

The design of the ship's decoration was entrusted to one of the most famous masters of the Spanish Renaissance, Juan de Mal Lara. Well, he tried to create a real masterpiece of ship art. Thus, he decorated the superstructure on the poop outside with sculptures and paintings on the biblical and antique themes of the brush by prominent artists of his time Juan Bautista Vázquez the Elder and Benvenuto Tortello; woodcarvings covered with abundant gilding, which gave the gallery a truly “royal” look. 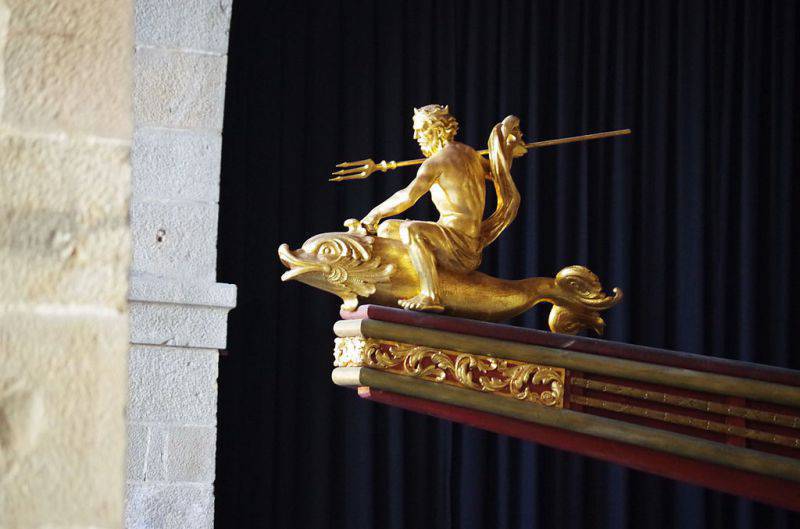 The figure on the end of the spy - Neptune riding a dolphin - cut by sculptor Gabriel Alabert. The sails on the gallery were striped, red-and-white, which emphasized its flagship status, since ordinary galleys had sails of ordinary unpainted fabric. 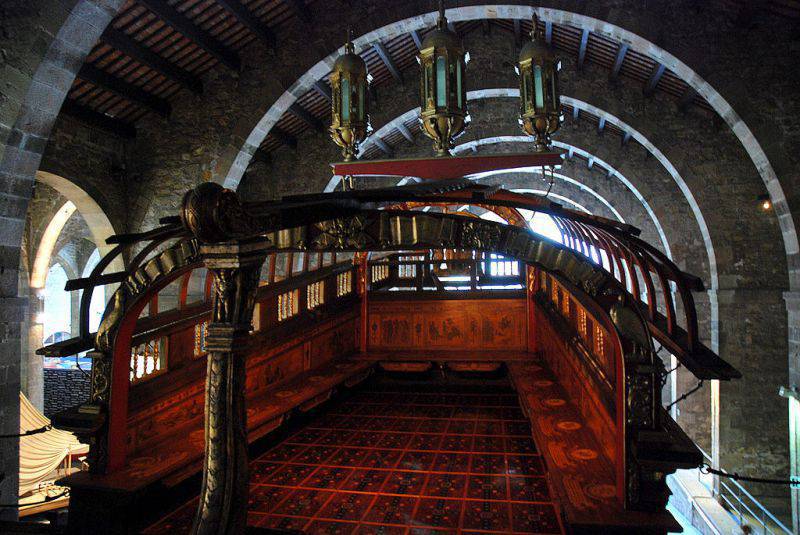 Aft lights on the gallery are huge. 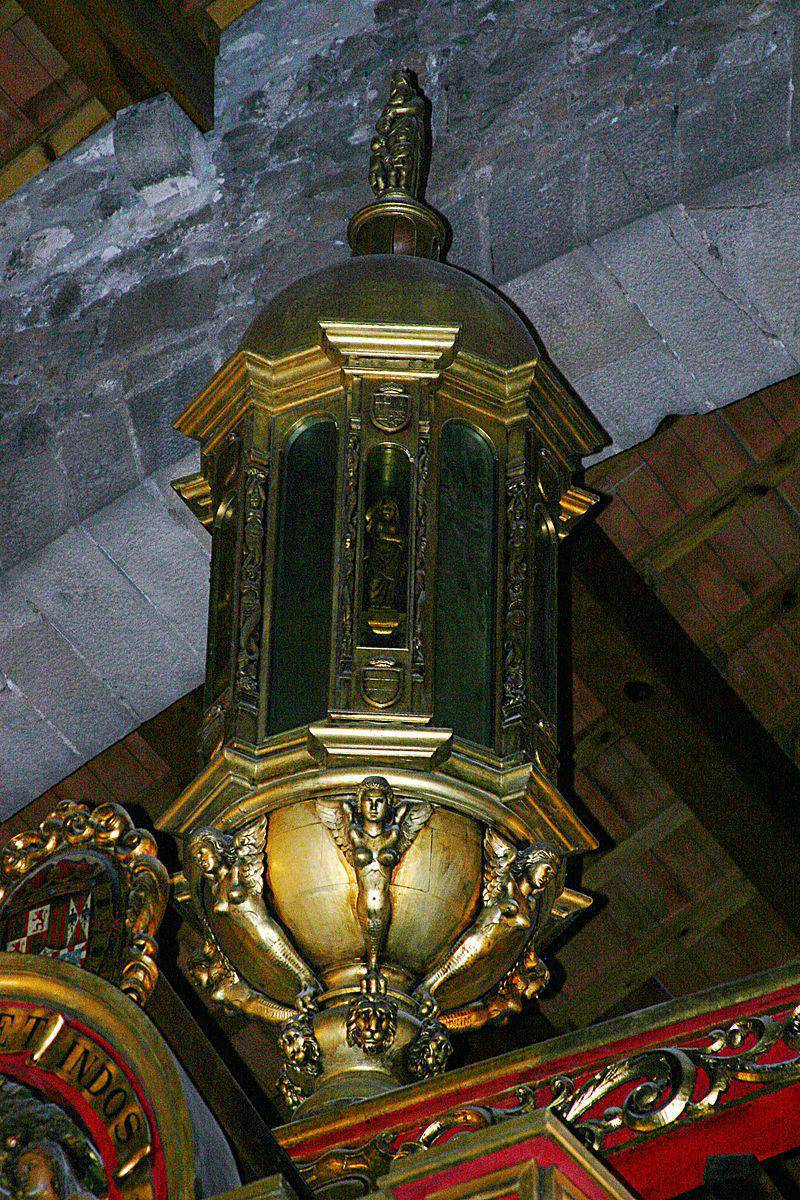 The stern lantern was then also placed only on flagship galleys; but on the “Real”, to once again emphasize its dignity, three lights were installed at once in the stern lights! 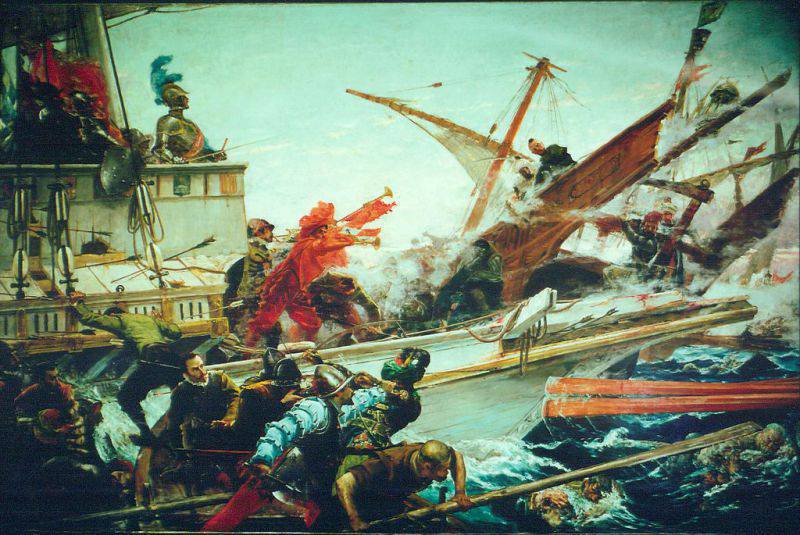 The vessel was launched in the 1568 year and had a displacement of 237 tons. The length was equal to 60 m, the width along the midsection board was 6,2 m, that is, the vessel was very narrow relative to its width! The draft was 2,08 m. The galley movement was driven by two oblique sails and 60 oars. The sail area was 691 m². 236 rowers worked on the oars, and besides them the crew of the galley consisted of about 400 soldiers and sailors! That is, the people inside her were stuffed like herring in a barrel! By the way, in the museum itself there is a screen on which an animated picture of the rowers' work is shown. Look ... and you do not want to work under any pretext! 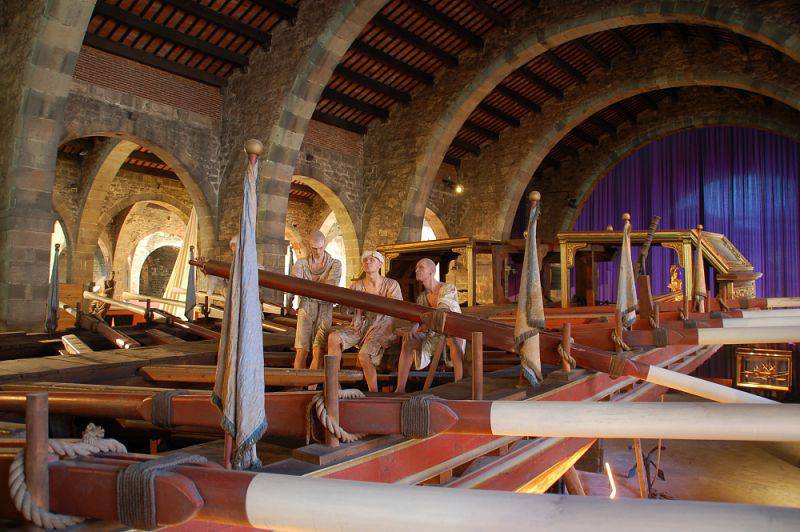 Several figures of rowers on the deck.

In the bottom there is a cutout and it is clear how barrels and a man for scale were located in the hold. You can look at the deck from above, but it's difficult, and it's a bit dark under the ceiling. Taking photographs against the light of large arched windows is difficult and inconvenient, and the view from the side is impossible in principle. And yet, the replica makes a very reliable and extremely strong impression. So it seems that this is a ship of that time and this impression does not disappear during all that time while you look at this ship! 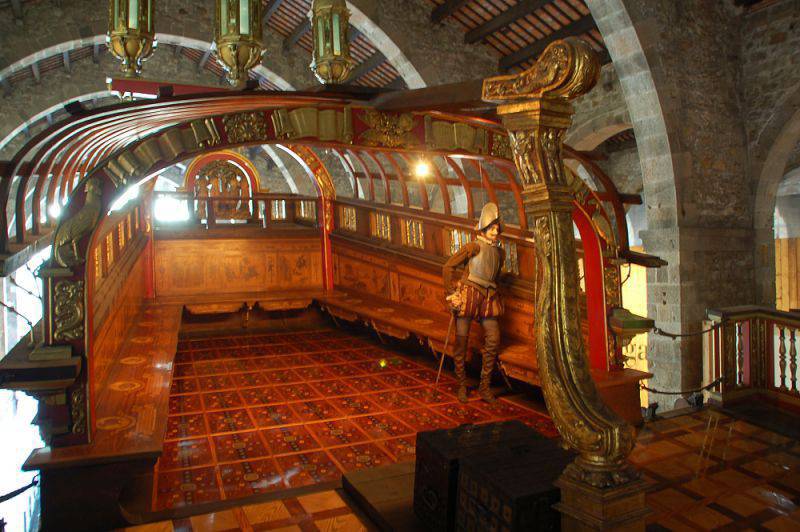 Who will say that this is the deck of a warship? What is parquet? That's just the figure of a soldier in a helmet Morion recalls the opposite!

We are in Yandex Zen
The cruiser "Olympia" or the US colonial past for sale!
The oldest active ship of the Russian Navy
23 comments
Information
Dear reader, to leave comments on the publication, you must to register.