October 14 2015
111
Demonstration of the Yak-141 at the air show in Farnborough became the “swan song” of a unique fighter. OKB them. Yakovlev did not receive a single order either from domestic or from foreign customers.


Potential customers did not see the need for acquiring a VTOL. With all the advantages of the "vertical" could not be compared in combat qualities with a classic fighter. High LTH, long range and lower maintenance labor intensity were more important than the possibility of taking off from any “patch”.

“Yaku” was not at all pleased with the domestic customers from the Moscow Region. After 17 years of development, the super fighter failed the GSI (the crash of the Yak-141 aboard the Admiral Gorshkov aircraft carrier). Sailors by that time had reassessed the tactics of applying deck aviation in the direction of fighters with high thrust-weight ratio and shortened springboard take-off. Under the circumstances, the unfortunate “Yak” could not oppose anything to the mighty Su-33.

Suddenly, Lockheed Martin appeared on the horizon, just working on a vertical take-off 5 fighter. The Americans provided funding in exchange for obtaining technical data and limited design data on the Yak-141 and other projects of domestic VTOLs.

It is not by chance that there are so many common solutions in the designs of the “Yak” and the notorious Lockheed Martin F-35! 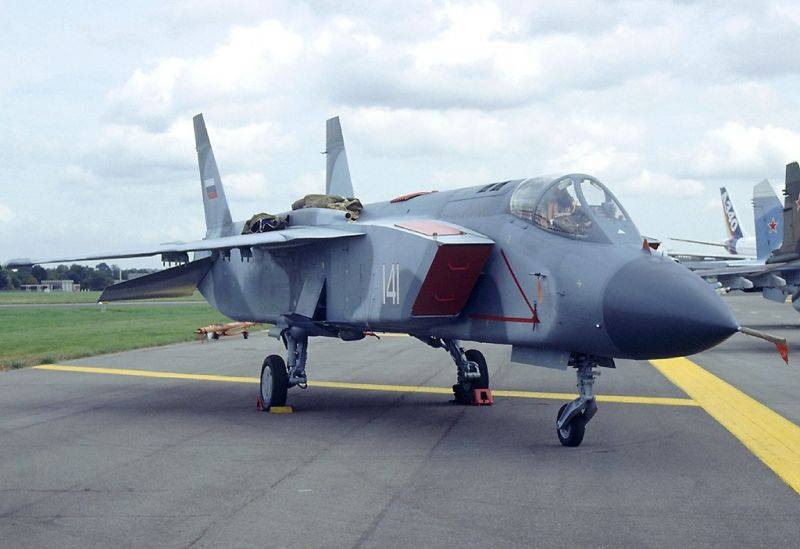 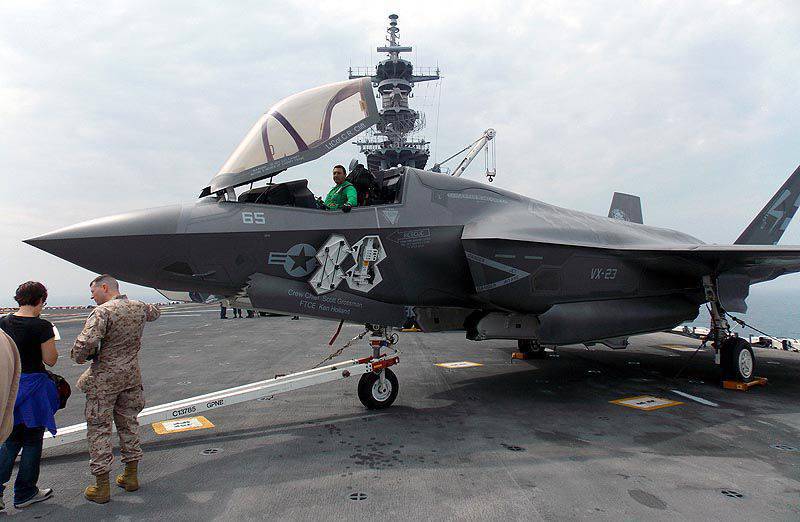 The mention of the “Soviet legacy” of the Pentagon’s most high-tech combat system infuriates those who are not indifferent to “Western values”. What is common between the Soviet “vertical line” and the “5” generation stealth plane?

Skeptics put forward counter-arguments, proving once again that the Yankees did not benefit from cooperation with the Russians. The Yak-141 drawings, obtained with such difficulty, were rolled up and set aside. The development of the lightweight fighter generation "5" was carried out exclusively on its own, the company "Lockheed Martin" with an eye on the older brother F-22 "Raptor". 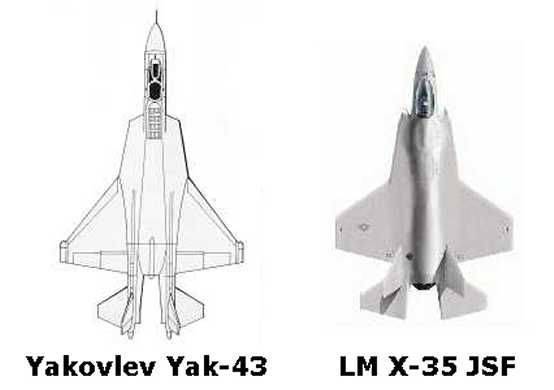 On the left - a draft design of a multi-purpose fighter Yak-43 with a shortened take-off, which became the further development of the deck Yak-141.

Of course, external comparison alone is not enough. The laws of aerodynamics are valid on both sides of the ocean. Moreover, if judged impartially, then even the outward resemblance there is far from being absolute.

In attempts to disown any associations with the Soviet “Yak”, the supporters of “Lockheed” give a number of murderous arguments. What is similar to overseas JSF and domestic 141?

The most powerful engine in stories fighter aircraft? (The afterburner is 19 tons! “Pratt Whitney F135” burns like two Su-27 engines.)

And also with the four-barreled EQ cannon in a hanging stealth container, internal weapons compartments, a modern “glass cabin”, deep unification with two other F-35 variants for the Air Force and aviation fleet, a developed system of self-testing and automatic troubleshooting. Eight million lines of code at last.

General and really a lot! Is that the scheme “vysokoplan” and two wings. Even the keels of Lightning are divorced on 20 gr. from the normal.

But the main difference between the F-35B is a unique way of vertical takeoff.
The new scheme is fundamentally different from all that used previously on other VTOL.

Let me remind you that the Yak-141 carried out a vertical take-off at the expense of three turbojet engines: a lifting-cruising Р79В-300 with a deflecting nozzle and two lifting RD-41 installed in the compartment behind the cockpit. 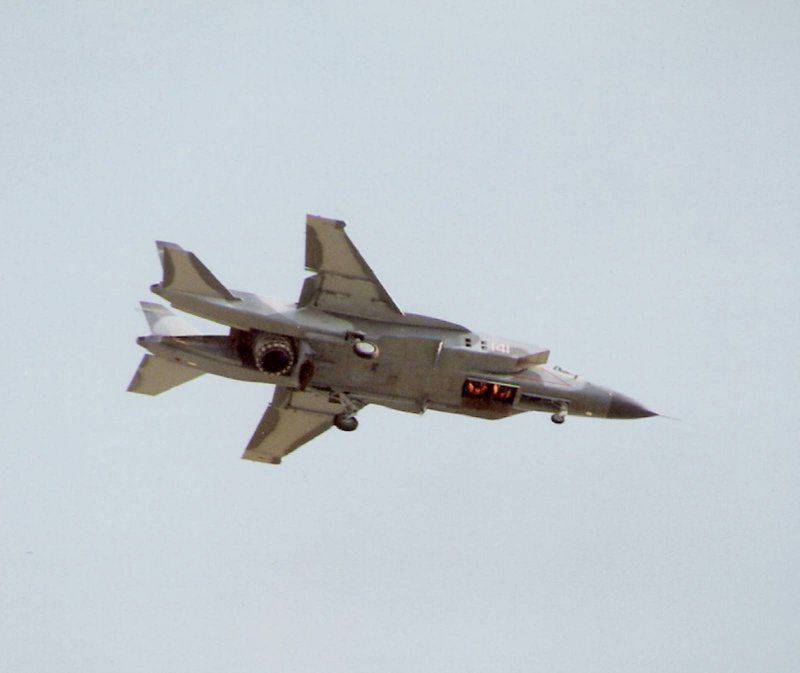 Yak-43, which is usually issued for the Yak-141 and is compared with the F-35B due to a certain external similarity with the American car. That “Yak” did not have a hover mode at all, as well as the possibility of take-off at zero horizontal speed. It was created as a fighter with a shortened take-off, whose abilities were achieved by a hurricane NK-32 engine from a Tu-160 bomber with a deflected thrust vector. No other techniques were used to facilitate take-off.

The family of British “Harriers” takes off with the help of a single PMD with four rotary nozzles located near the center of gravity of the aircraft. Thus, the British “vertical line” is deprived of the need to drag in flight “dead weight” in the form of additional lifting turbojet engines. In addition to the successful Rolls-Royce Pegas engine, the project’s success was limited mass dimensions all VTOLS this family.

According to the value of the second generation “Harrier” take-off mass twice inferior to the F-35! 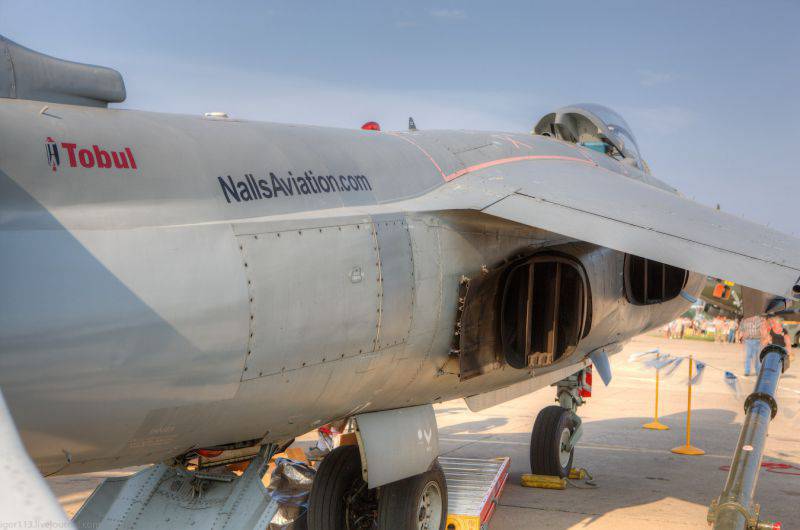 The design of the F-35B implemented a relatively simple and effective scheme using a “cold” lifting fan, whose transmission is driven by a lifting / cruising engine (PMD) with a rotating nozzle.

In order to avoid extreme heat loads and increase the efficiency of the fan, air is supplied to the PMD compressor in the vertical take-off mode through a special air intake on the upper side of the fuselage. 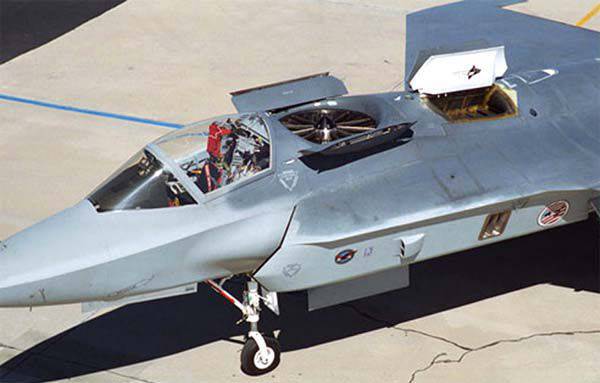 Even half of the innovations listed are enough to dispel the myth of the similarity of “Yak” and F-35. Did the cooperation of “Lockheed” with the Yakovlev Design Bureau really ended in nothing?

Americans are too pragmatic for everything to end so simply. Without denying the importance of the emergence of a super-powerful engine and radar with unique characteristics, whose creators claimed to receive the Nobel Prize, you should pay attention to the following circumstance. In any design there are a number of critical nodes on which everything depends.

In the design of VTOL aircraft, such a place is the thrust vector control of the engine. Especially in the form in which it is implemented on the F-35. The progressive movement of mechanical parts in conditions of thermal heating. When it comes to one of the most powerful aircraft engines in the world!

This is where the experience of Soviet designers and Yak-141 came in handy. A three-prong nozzle that can turn down 95 ° in 2,5 seconds. Burning (but not burning) in a raging blue jet flame! 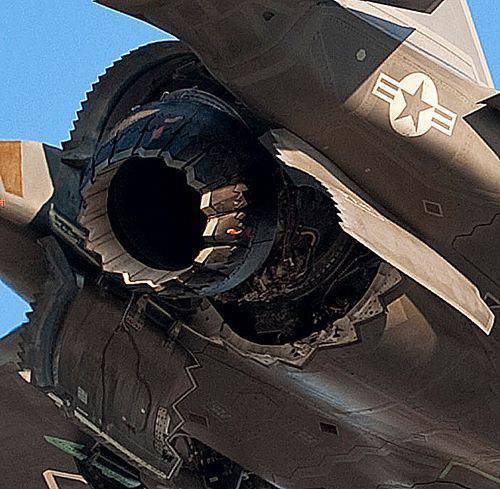 Of course, there are skeptics who begin to argue that the design of the Integrated Lift Fan Propulsion System (ILFPS) lifting system for the F-35B was done not by Lockheed, but by the British Rolls Royce. A company with its own solid experience in this field of technology. With its secrets and know-how. For example, in six hydraulic actuators of the F-35 nozzle, aviation fuel is used as the working fluid.

Those who claim the similarity of the Yak and F-35 do not like to recall that for the first time such a three-support nozzle was designed by Konver for a deck fighter with a vertical takeoff of the Convair Model 200. It was on this concept of 1972 that the “Yakovlevists” were guided when choosing a PMD with one turning nozzle for their Yak-141. 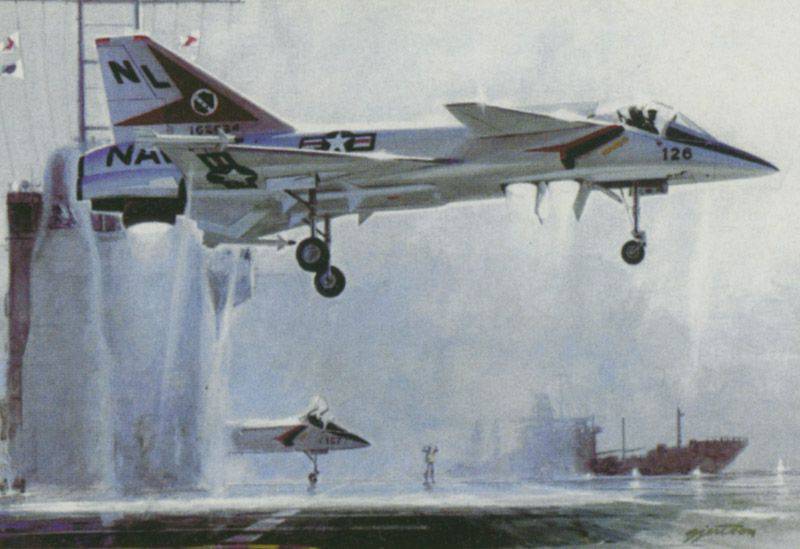 But all of the above does not deny the fact that the world's first potentially combat-capable SVVP with a three-section moving nozzle was built in our country by the specialists of the OKB Design Bureau. Yakovlev. Supersonic Yak-141 could not fail to impress the Americans. It was important for foreign guests to see how their theoretical studies were embodied in practice.

No less controversial layout tail. “Yak” and F-35 - like twins. Identical cantilever beams, to which the plumage is attached, with a PMD nozzle placed between them.

On the other hand, what is strange about the fact that a double-jerked single-engine aircraft has a nozzle located in the space between the two keels? According to the laws of Euclidean geometry - how to place it differently? The protruding horizontal tail planes are a consequence of the small length of the engine: the designers tried to place the rotating nozzle as close as possible to the center of gravity of the aircraft.

The claimed similarity of the Yak-141 and F-35 is very vague. The available facts do not allow to draw any conclusions about copying and borrowing technologies. Too different planes of different generations.

All lovers complain about the “lost technology” I hasten to remind you that the Americans are attacking the same rake that the “Yak” once attacked. All domestic and foreign VTOL are united by the general inadequacy and lack of a clear niche for their use. In normal flight mode, the "vertical" carry "dead weight" in the form of lifting units. Engines and fans take for themselves a significant amount inside the fuselage, where fuel tanks and other payloads are usually placed.

As a result, only one of the three modifications of the F-35 (F-35B) has the ability to take off vertically. And the number of aircraft of this modification will be only 15% of the planned number of F-35. Neither the Air Force, nor the fleet, nor for export such aircraft are needed. The only customer is the marines, which over the past half century have never had to operate from advanced unprepared airfields. The choice in favor of F-35B is primarily due to the prestige and interests of the commercial structures that make up the JSF project.

We are in Yandex Zen
Vertical take-off aircraft
Convertoplane (helicopter) Bell V-22 Osprey
111 comments
Information
Dear reader, to leave comments on the publication, you must to register.