ISIS began with the Taliban


Along with the crisis in the Middle East region, where much of Syria and Iraq is under the control of the terrorist organization Islamic State of Iraq and the Levant, and the efforts of the international antiterrorist coalition led by the United States do not bring results, the situation in Afghanistan is of particular concern.

The growing terrorist activity hinders the development of Afghanistan, and a significant influx of drugs weapons and trained militants from its territory pose a threat to neighbors and especially to the countries of Central Asia.

In this situation, it is necessary to jointly look for measures, the implementation of which will allow restoring peace and tranquility in this long-suffering country, and not allowing the instability zone to grow in neighboring regions.

Afghan issues and everything related to security in the SCO zone are in the constant attention of the Minister of Defense of the Russian Federation, Army General S. G. Shoigu.

It was on his initiative that the idea of ​​holding a conference on Afghan issues was supported by our partners in the SCO at the Council of Ministers of Defense of the organization in St. Petersburg 30 this June.

Let me announce the greeting of the Minister of Defense of the Russian Federation to the participants and guests of our conference.

I welcome the participants and guests of the International Conference on Afghanistan.

For several decades, the country does not stop fighting. After the withdrawal of the main contingent of the International Security Assistance Force, the military situation remains tense. Activized terrorist organizations interested in maintaining instability.

Of particular concern is the increased activity of emissaries of the so-called Islamic State in Afghanistan.

Strengthening regional security is possible with the combined efforts of all interested states. In particular, concerted action within the framework of the Shanghai Cooperation Organization could contribute to positive changes in Afghanistan.

We are convinced that an open exchange of views within the framework of the conference will contribute to the development of recommendations for effectively countering the challenges and threats to the security of the region.

It is important to form a common understanding of what we could do together to help the Afghan leadership and to prevent the spread of extremism to neighboring states.

We expect that the forum of representatives of the general staffs will allow an analysis of the reasons that led to the current situation in Afghanistan, and will help determine ways to achieve stability in the country and in the region as a whole.

I wish you fruitful discussions and all the best.

An analysis of the military-political situation directly in Afghanistan and the Central Asian region shows that a number of factors in the political, economic and military spheres themselves influence its development. To date, a stable balanced mutual security system has not been formed in the region. The previously established mechanisms of regional security based on mutual deterrence are not working today. New challenges and threats have emerged, often uncharacteristic for this region. 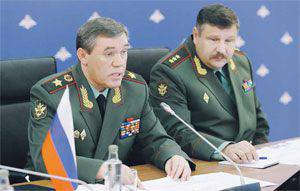 Systemic security problems arose here in the early 90s of the last century, when the Islamic Taliban movement was formed to fight a limited contingent of Soviet troops, and subsequently after the collapse of the USSR, the global balance of forces that had existed for many years was destroyed. Sensing itself to be the victor in the Cold War, a number of Western states have ceased to take into account the interests of other countries and the norms of international law in their policies. As the main tool for achieving national interests, they began to use the technology of "color revolutions". At the same time, they took the decisive word in determining the democratic nature of the legitimate authorities of states in any region of the world. The experience of using the Taliban as a prototype of modern terrorist movements has become widely used outside Afghanistan. As a result, the activities of various international extremist and terrorist groups have become one of the main threats to the national security of many states.

Currently, there are up to 50 thousands of militants in Afghanistan, united in more than four thousand troops and groups of various types. They are based on the Islamic Taliban movement numbering up to 40 thousands of militants. The active opposition of extremists to government troops does not allow official Kabul to solve problems of stabilizing the political and socio-economic situation in the country, leading to unjustified loss of life and the constant increase in the number of refugees to neighboring countries, and through them to Europe.

Over the past year, the activity of the international terrorist organization Islamic State of Iraq and the Levant in the country has sharply increased. In order to expand its sphere of influence and build the Islamic Caliphate, it takes control of more and more new regions. According to our estimates, there are between two and three thousand ISIL militants in Afghanistan and their number is constantly growing.

As a result of the sabotage and terrorist activities of radical extremists, the number of dead Afghan citizens this year increased by 25 percent and reached over 3,5 thousands of people. About seven thousand people were injured. In addition, the number of refugees from Afghanistan has significantly increased.

At present, the European Union has decided to resettle around 150 thousands of migrants in European countries. However, the real flow of refugees is much greater. According to some data, already this year up to one million people may go in search of asylum to the countries of the continent. Many among them come from Afghanistan. Every day, up to eight thousand people turn to the Afghan authorities to issue a passport. The reason for this is the enforced spread of extremist ideology among the population, incessant terrorist attacks, low standard of living of the population.

Another significant factor affecting the situation in Afghanistan remains the growth in the volume of drug trafficking to neighboring countries, which is the main source of financing the terrorist activities of militants.

Over the past 14, the volume of drug production has increased by 40 times, and the amount of opium produced this year may reach eight thousand tons, which is more than last year by 20 percent.

We, as the military, are particularly concerned about the insufficient training and equipment of the Afghan security forces, which does not allow them to effectively conduct operations against illegal armed groups. An example of this is the capture by militants of the Taliban Movement of the city of Kunduz, a major administrative center in the north of the country, although NATO forces located in the country were involved in its defense.

But a year ago, the United States, NATO and their allies, winding down the mission of international forces in Afghanistan, declared that the situation in the region had stabilized and that the Afghan security forces were able to ensure security in the state. As you can see, this did not happen.

The combination of these factors contributes to further exacerbating the situation in Afghanistan, establishing extremist control over entire regions, merging terrorist groups with organized crime and as a result increasing opiate production and drug trafficking, worsening the socio-economic situation of ordinary Afghans, increasing the number of unemployed, outflow of citizens from the country and strengthening the political position of extremist organizations.

Act quickly and together

Today, a new look at security in the region is required. It is necessary to reflect on the contribution of the SCO and partner countries to organizing collective efforts to support the Afghan leadership and to develop effective measures to stabilize the situation in Afghanistan.

Collective security in the region can be ensured only on the basis of joint actions of geographically close and having common interests of states.

Therefore, dear participants and guests of the conference will require maximum readiness for dialogue from you. Despite the complexity of the situation, we see the readiness of the leadership and people of Afghanistan to fight for the restoration of peace and order in their country. At the same time, without the help of friendly states and organizations, this will not be easy.

In our opinion, to stabilize the situation in Afghanistan and Central Asia, it is necessary:

- first, to render assistance to the leadership of Afghanistan and other Central Asian states in equipping and training law enforcement agencies to increase the effectiveness of their actions against extremists;
- secondly, to maximally use all possible institutions to promote the socio-economic development of the countries of the region and to provide humanitarian assistance to the people of Afghanistan;
- thirdly, by joint efforts to cut off sources of financing, channels for the supply of weapons and material resources to extremist organizations operating in Afghanistan.


Another way to stabilize the situation can be countering the ideology of extremism.

Only purposeful teamwork will help stabilize the situation in Central Asia and prevent the influence of extremist organizations from spreading to other countries and regions. I believe that during the discussions at the conference you will be able to exchange views on the current situation, which will contribute to the formation of a new regional security system.

Ctrl Enter
Noticed oshЫbku Highlight text and press. Ctrl + Enter
We are
Military reform as an integral part of the security concept of the Russian Federation: Systematic dynamic assessmentBattle without a win
Military Reviewin Yandex News
Military Reviewin Google News
10 comments
Information
Dear reader, to leave comments on the publication, you must to register.